this doesn’t concern directly World of Tanks (because you know what the stance of Wargaming on AA tanks is), nor does it really concern War Thunder (though… hell, for a Czechoslovak branch with crews I might even consider becoming a turncoat), but I think it is interesting nonetheless.

The AA vehicle category evolved fully during the Second World War, but the vehicle concept itself is quite old – first AA vehicles appeared as early as WW1, although those were simply flatbed trucks with guns mounted on them. Some development went on before the war (including Czechoslovakia), but the real boom happened during the war, especially on the German side, with every chassis from Panzer I up to Panther was used to create anti-aircraft vehicles.

This development did not escape Czechoslovak engineers of course. After the war, quite a high number of indigenous anti-aircraft guns was developed in calibers ranging from high-caliber machineguns and 20-30mm autocannons over 57mm models and 100mm heavy AA guns up to the massive 130mm R14 cannon and even a 152mm heavy AA gun by Škoda. It was only natural that some of these guns would be used on a fully tracked or half-track chassis to provide mobile AA support to the mechanized units. There were even attempts to create guided AA missiles and to put them on halftrack platforms, but that is not the scope of this article.

One of the first attempts to create a modern AA vehicle was concieved in November 1948. Between 18.11. and 20.11., a conference was held at Škoda Works in Pilsen between the representatives of the industry, the tank forces and the artillery forces of the Czechoslovak army. A large number of interesting demands and proposals came from this conference, but two of them are currently most interesting. One demand by the tank military branch was to create an AA vehicle with a 50mm AA gun based on the so-called “lehký podvozek” – (“light chassis”). The other was to use the same chassis for a quad-20mm mount. 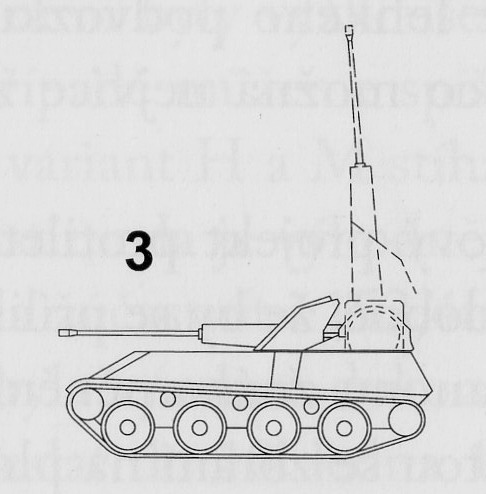 Above, we can see the look from the initial proposals by Škoda. In case, you are wondering, what the hell is an “LP platform” – it was a newly-designed universal light chassis proposal (connected with the Škoda T-17 light tank by development), that was to be used for light AA, artillery and TD vehicles. There were several proposals based on this chassis, including a Hetzer-like tank destroyer, a “Hellcat” with turret, but also a light self-propelled 105mm artillery piece. Heavier vehicles were to use a platform, based on the TVP chassis. 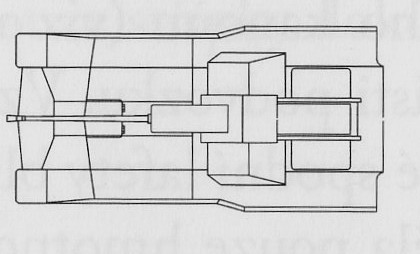 Based on the aforementioned conference, on 15.2.1949, Škoda prepared a preliminary proposal for these vehicles. The AA vehicles included, as mentioned above, a 50mm AA and quad 20mm AA variant (visually it resembled the 50mm setup) with the engine in the front and AA gun platform in the back. The 50mm gun was of an yet-undetermined Škoda autocannon (possibly in development), the only data that are known are the weight of the shell (2,12kg) and the muzzle velocity (1020 m/s). The gun was to be fed with a 80-round magazine. Frontal hull armor of this vehicle was to be 25mm thick, but the gun shield was projected thicker – 50mm. Projected initial weight of the vehicle was 16,4 tons, but this was considered a lot, and so Škoda was also considering a lighter variant with only 20mm of armor, that would weigh 14,6 tons. The vehicle was equipped with a combined Vz.47 targetting device for both ground and air targets, but the proposal also mentioned the newly developed AÚZ automatic targetting system, installed on a special “battery commander” vehicle.

After these initial proposals, Škoda (on 13.2.1949) recieved additional demands from VTU (Military Institute), the vehicle was to be powered by a 300hp diesel or a supercharged 500hp air-cooled turbodiesel V8, it was to be no more than 3000mm wide, the clearance was to be 400mm and it was to carry enough fuel for 10-12 hours of driving. Furthermore, the maximum speed was to reach 55 km/h, the ground pressure was not to exceed 0,5 kg/cm2. The vehicle was to be able to overcome a 0,8 meter high wall, to ford a 110cm deep river and to cross a 250cm wide trench. It was supposed to carry a smoke generator as well.

The guns of the design were also to be upgraded, based on army demands, to 30mm twin autocannon or a newly developed 57mm autocannon, but the option to include the 20mm quad was still there. The army however also demanded the guns to be moved to the front of the vehicle or to the center and not to the back, as Škoda proposed. Furthermore, 25mm of armor was demanded, gun elevation was demanded as -10/+85 degrees and the gun was to be fully traverseable. The vehicle was to have a crew of 4 and was to carry 150 rounds for the 57mm autocannon.

Of the exact fate of this design, nothing is known, but it was very likely cancelled in 1950 (just like the rest of the Czechosklovak armor development) based on the political pressure to purchase Soviet vehicles instead. The entire concept of the “light chassis” (LP) was cancelled, including all the other vehicles, that were to be based on it.

It’s worth noting that initially, the army demanded a heavy AA vehicle based on TVP as well, but using the heavy (and expensive) TVP medium tank chassis for an AA platform was considered wasteful and pointless.

This design came from the same conference and Škoda proposal batch as the previous one. Czechoslovakia after the war had a large number of captured German HKL6P halftracks and one idea was to use this platform for an AA vehicle, as the Germans did during the war. The halftrack however was too light (the chassis itself weighed 4,1 tons) and there was a concern that installing the 50mm gun with a massive 40mm thick gun shield (and ammo capacity of 80 rounds) would overstress the vehicle too much (the total weight would reach 8,5 tons) and so this project was immediately refused. 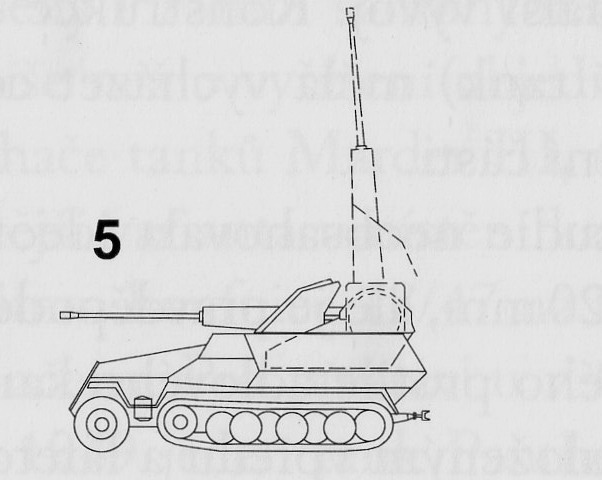 Strangely enough, there was even a proposal to mount the captured 88mm PaK 43 L/71 guns on the same chassis as a tank destroyer, but that was never accepted either, as the entiry chassis was too light for this as well.