I believe it’s no secret that I am not a fan of the EFE clan, that, in my opinion, carries the torch of the “rudest clan out there” after EXNOM was disbanded. And there is a reason why I am not exactly a fan. Check this out:

Do you think the clan leadership is concerned with keeping their clan clean of such complete retards? Think again. 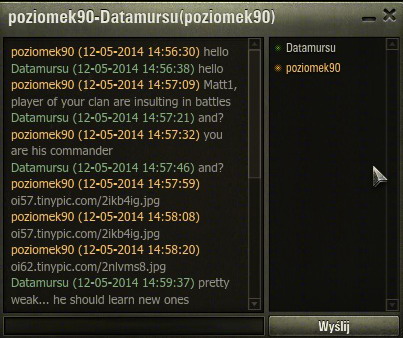 And this guy is a clan recruiter: 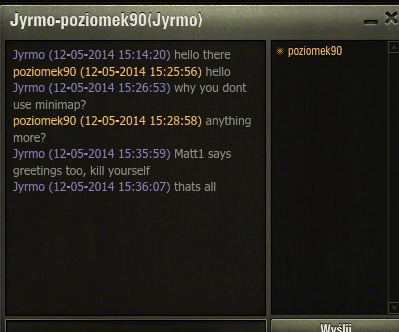 Obviously, the entire clan is filled with such filth. It’s a shame really, but in this case, the few “bad apples” spoiled the entire basket methinks. In case you are wondering, Matt1 recieved a 14 day chatban for this – personally, I don’t think this is sufficient, an account wipe or perhaps a 1 month ban would be more appropriate solution.

You know, I really don’t get it. I get angry as well, I call people fucking retards and such – but invoking Hitler? Wishing cancer and rape? Obviously the standard approach (reporting these players) is not working, clans such as EFE don’t take punishments seriously. Therefore, I think I am going sort of “restart” Hall of Shame – but with a twist.

Right now, Wargaming is sensitive to the entire “nazi” thing (as was mentioned numerous times, Russians take this sort of crap very seriously). What Wargaming doesn’t want is bad publicity, such as “Wargaming EU allows nazis to roam free” – so, got screenshots of these assholes sending people to Auschwitz, spamming Heil Hitler, or wishing gas chambers for other nationalities? Send them to me at fortherecordwot@gmail.com – and we just might do something about all of that in general. We’ll see.

Edit: Well, I think that was enough of rage. Comments closed.