it was in 1944, when Germany released the last of its Big Cats, the mighty Tiger Ausf.B, otherwise known as the Tiger II or the Königstiger, and threw it on the front to stop the tidal wave of the allied onslaught. At 70 tons, it was a real monster, carrying the powerful 88mm L/71 gun, but it came too late and too few (less than 500) were made to make any serious difference in the war. It was also very expensive to produce, resource-requiring and it was plagued by mechanical issues. Nevertheless, the King Tiger remains one of the symbols of the German tank power of WW2.

During the last days of the war, King Tigers were still active outside of Germany and today, I’m going to write about those, that were active in Czechoslovakia. The Königstigers were usually organized in heavy tank batallions (schwere Panzerabteilung, sPzAbt), each consisting nominally of 45 vehicles – those were further split into companies, each company was then split into three platoons, each with four tanks. The rest of the vehicles of the batallion were command tanks of the company and batallion leaders and their deputies. The batallion was also supplemented with AA tanks (Flakpanzers), ARV’s (Bergepanzers), APC’s, trucks, cars and so on. These numbers were however purely theoretical, as late in the war, full state was practically never achieved and it was common for tank batallions to be at half strength or even less. In the end, it was even decided to nominally reduce the amount of companies per batallion to two.

When it comes to Czechoslovakia, three sPzAbt units were located on its territory by the end of the war – specifically sPzAbt 503, 507 and 509 (all of them army units, not Waffen SS).

sPzAbt 507 arrived in Czechoslovakia after being practically annihilated on the eastern front – it lost all of its heavy Tiger tanks and was supposed to be armed only with a Flakpanzer company (“Ostwind” 37mm Flakpanzer on Pz.IV chassis) and with some Jagdpanzers 38t from Kampfgruppe Milowitz (Milowitz – or Milovice – was a large training ground for Waffen SS units). sPzAbt 507 was headed to Prague to crush the May uprising, but its main motivation now to surrender to the Americans rather than Soviets – ultimately, it was unsuccessful.

sPzAbt 509 also only passed through Czechoslovakia. In December 1944, it was re-armed with brand new King Tigers and took part in heavy fighting in Hungary as a part of the VI.SS Panzer Corps around Budapest and then during the delaying actions, when the Germans were retreating to Austria. The retreat made the unit cross the borders to Czechoslovakia and when it was ordered to surrender on 8th of May 1945, the crews destroyed their remaining nine King Tigers (most of which broke down at that point) south of Znojmo (south-east Moravia) and by the time sPzAbt 509 surrendered to American units, all that remained of the heavy tank batallion vehicles were two personal cars and one truck.

sPzAbt 503 spent the longest time in Czechoslovakia. It was one of the oldest heavy tank batallions. Formed in May 1942, it fought both on eastern and western front (including the legendary battle of Kursk). It was practically annihilated several times (including the Falaise gap) and reformed, its last notable heavy fighting taking place in Hungary near Budapest and . Perhaps its most notable member was Kurt Knispel, a Sudetendeutsche known for his conflicts with nazi authorities and possibly the best tank ace in history. In December 1944, the unit, after losing practically all of its armor near Budapest, was renamed to sPzAbt “Feldherrnhalle” and was attached to an army corps of the same name. After the defeat in Hungary, the unit was moved to Slovakia (crossing the border on 13.2.1945), where it successfully crushed the Soviet bridgehead at Hron in Slovakia on along with the 44th Infantry division on 25.2.1945 (at that point, it had 21 Tiger II tanks, only 11 of which were operational). Later found itself in Moravia, fighting around the city of Břeclav.

Near the town of Lanžhot, the unit lost one Tiger II on 11.4.1945. Thirteen of the unit’s operational Tiger II tanks assaulted the town, destroying 20 Russian tanks and self-propelled guns while losing one Tiger II. Further fighting around Břeclav did cost the unit two more Tiger II tanks, the Soviets however lost 16 tanks to the guns of the Tigers. 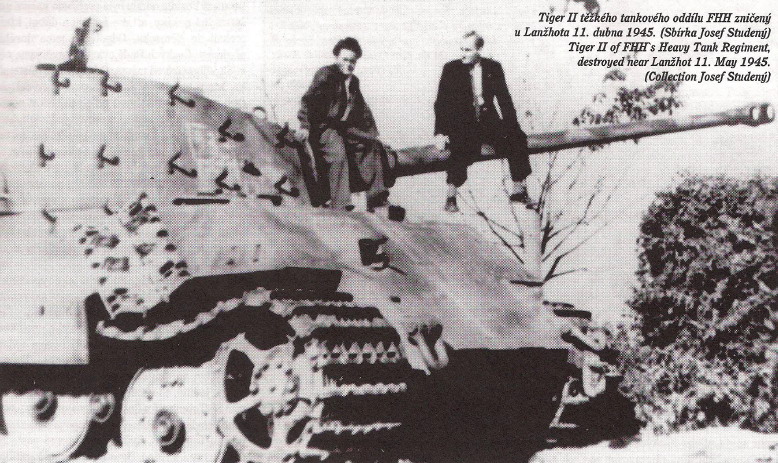 Around 21st of April 1945, the remaining units of sPzAbt 503 were assigned the the armored division Feldherrnhalle-2, that was created by uniting the remnants of the 13th Tank Division (destroyed near Budapest) and several other units. These tanks then reinforced its defensive positions near Drholec and Nový Přerov. On 7th of May 1945, the entire 8th Army was ordered to retreat to Třeboň (Wittingau) and then, further, to České Budějovice (Budweis). In the night between 9.5.and 10.5.1945, last larger battle that involved tanks took place in this region (near the village of Majdalena near Třeboň). The retreating FHH units were surrounded here and waited for the nightfall. Around 23:00, the Germans, supported by 10 tanks, managed to capture the important crossroads near the Majdalena train station and they continued to retreat to Třeboň. Třeboň however was liberated by that time by the Red Army and the access roads were covered by Soviet AT guns. Around 1 AM on 10.5., the German tanks charged the Soviet positions, but one Königstiger (command variant – only 25 were made, designated with roman I (black with white trim)- detachment commander’s vehicle) got stuck in the muddy field and the attack was not able to penetrate the AT position near Kopeček. Older sources state that it was knocked out by an AT gun. 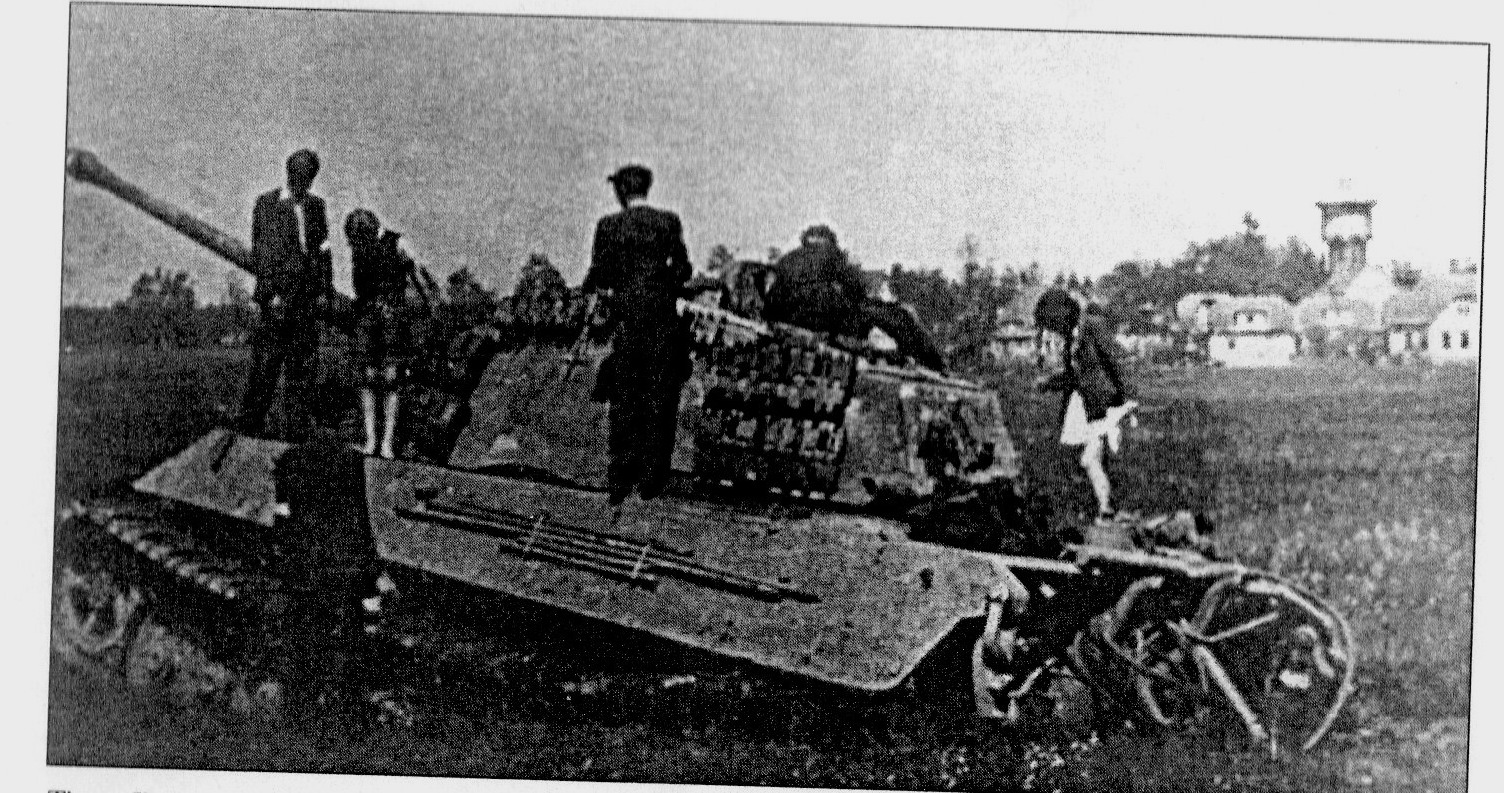 Seeing the tough resistance by the Red Army, German units, now in full retreat, tried to get to the west using other ways. Another Tiger II was seen retreating near Jindřichův Hradec (Neuhaus) and one was “lost” near Suchdol nad Lužnicí, where its crew, learning that the Red Army is already in Budějovice, decided to destroy the tank rather than let it fall into enemy hands – they wanted to drown it in a local lake, but the tank got stuck in mud (muddy meadow) on its way to the body of water and was abandoned. This tank was torn to pieces by explosives after the war and its remnants were melted down for scrap.

Two more King Tigers (numbers 30/K and 774/V) were found abandoned in Nová Ves nad Lužnicí, these were moved from there by the army engineers aftger the war. Otherwise, the numbers and accounts about the Tigers in the region are quite sketchy. One Tiger II was found abandoned near the town of Jílovice. German accounts also differ from other witness accounts – according to the accont of commander of sPzAbt 503, captain von Dienst-Köber, the Tigers, advancing on Budějovice, encountered several Czech civillians, armed with German AT guns, that were left there by routed German units. The Tigers allegedly routed the Czechs and continued west-wards. It’s possible that the captain confused Budějovice with Třeboň and in fact encountered Russian soldiers and not Czechs. Furthermore, Russian sources in the region actually reported repelling an assault by German King Tigers, so the truth will probably remain obscured forever.

Either way, it is documented that at least two of the Tiger II’s did manage to pass Budějovice and retreated further west. Both appeared to be operating independently on one another (each crew “finding its own way”), but both did belong to the same unit (the 503th). The remnants of the sPzAbt 503 encountered Americans near Budějovice – these Americans refused to accept their surrender and wanted to send the Germans in Russian direction, but the German commander of the vanguard, captain von Lettow-Vorbeck, spoke English and managed to trick them by telling them that the German HQ unit is in fact a few kilometers due east. The Tigers then passed the American positions and surrendered to the Americans further west. The two tanks passed the village of Křemže – the problem was however that a water stream stood in their way and the only way across was a wooden bridge. One of the drivers actually tried to drive the Tiger II (70 tons!) over the wooden bridge. As soon as the heavy tank entered the bridge, the bridge started to sway under it and the driver wisely reversed slowly. After that the Tigers attempted to use a nearby ford. One of the Tigers got almost stuck in the mud, but it managed to reverse back on solid ground. The tanks then doublebacked back to Křemže and chose a different direction (Brloh). For unknown reasons, one of the Tigers (probably fearing the open road) chose to cross the field instead of following the road and got stuck in the mud. The crew tried to get it unstuck, but in vain and so it left the vehicle, the engine was even still running when it was found. The vehicle was immediately looted by local civillians and stripped of all useful parts (binoculers, crew handguns etc.). They were spotted by another advancing column of Germans, which stopped, making the civillians scatter, but after that, without a single shot, it just continued to move on. This stuck tiger was in Dunkelgelb color with zimmerit coating and it had a black number 112 with white trim on its turret. 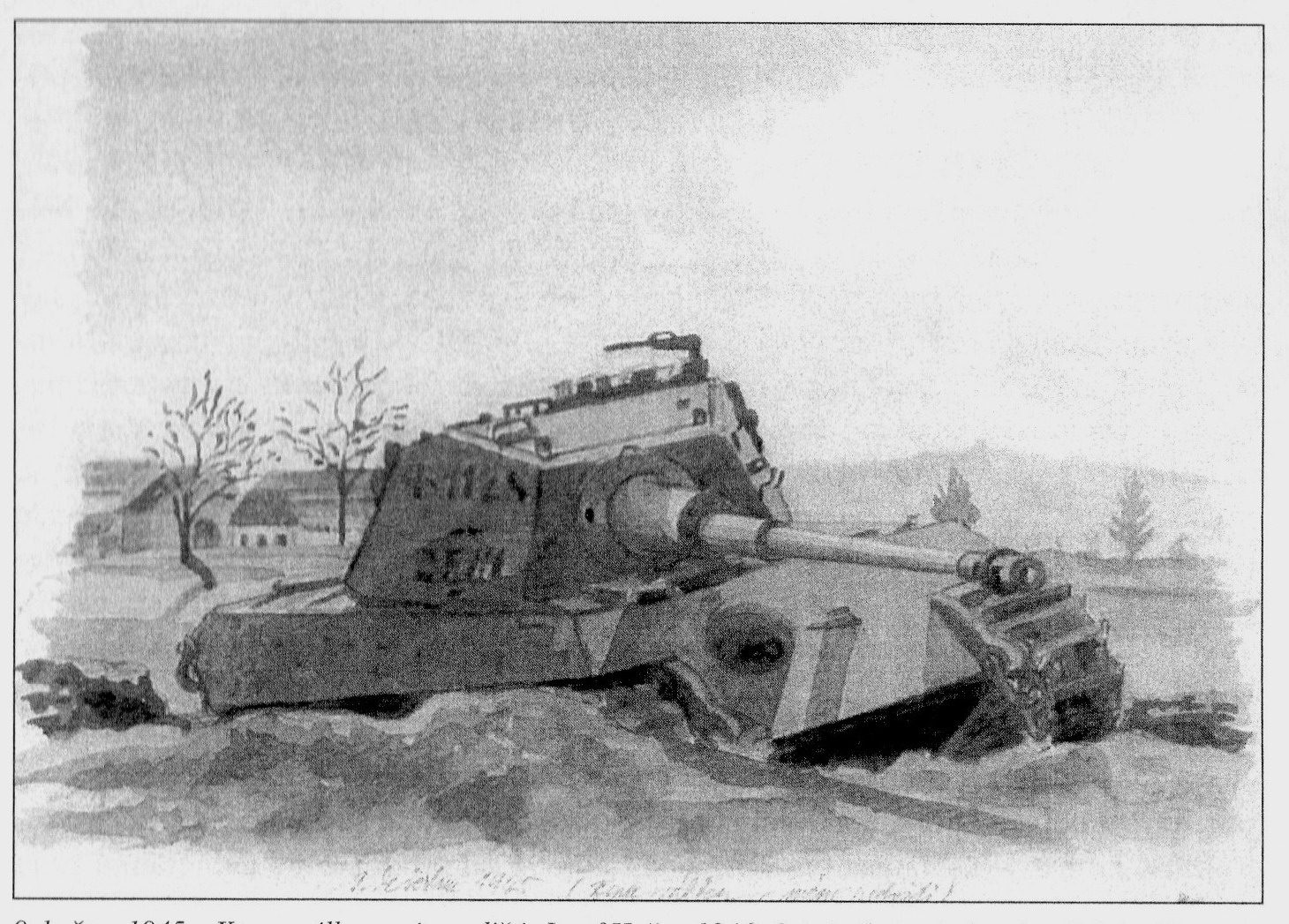 The second vehicle made it as far as Kuklov (Kugelweit), but at one point it drove too close to the edge of the unpaved road, which collapsed under its weight and this vehicle got stuck as well. The crew abandoned it – they did blow up the suspension (before, they actually took care to walk to all the nearby houses, telling people to open their windows so the explosion wouldn’t break them). Then they left. This tank had a number 213, a basic dunkelgelb coating with brown and green spots drawn over it to mask the vehicle. Furthermore, it had a white inscription “Margia” on its frontal hull under the light. After it was abandoned, local kids played with it (they managed to turn the turret a little using hand cranks) – this was actually quite dangerous, after the war it happened several times that children, playing inside abandoned vehicles, were hurt – or caused harm, the saddest case was probably what happened in Budapest, where one Zrinyi II assault gun was abandoned with a loaded howitzer and children, exploring the tank, triggered it by accident. The gun destroyed a nearby building, killing 19 people. 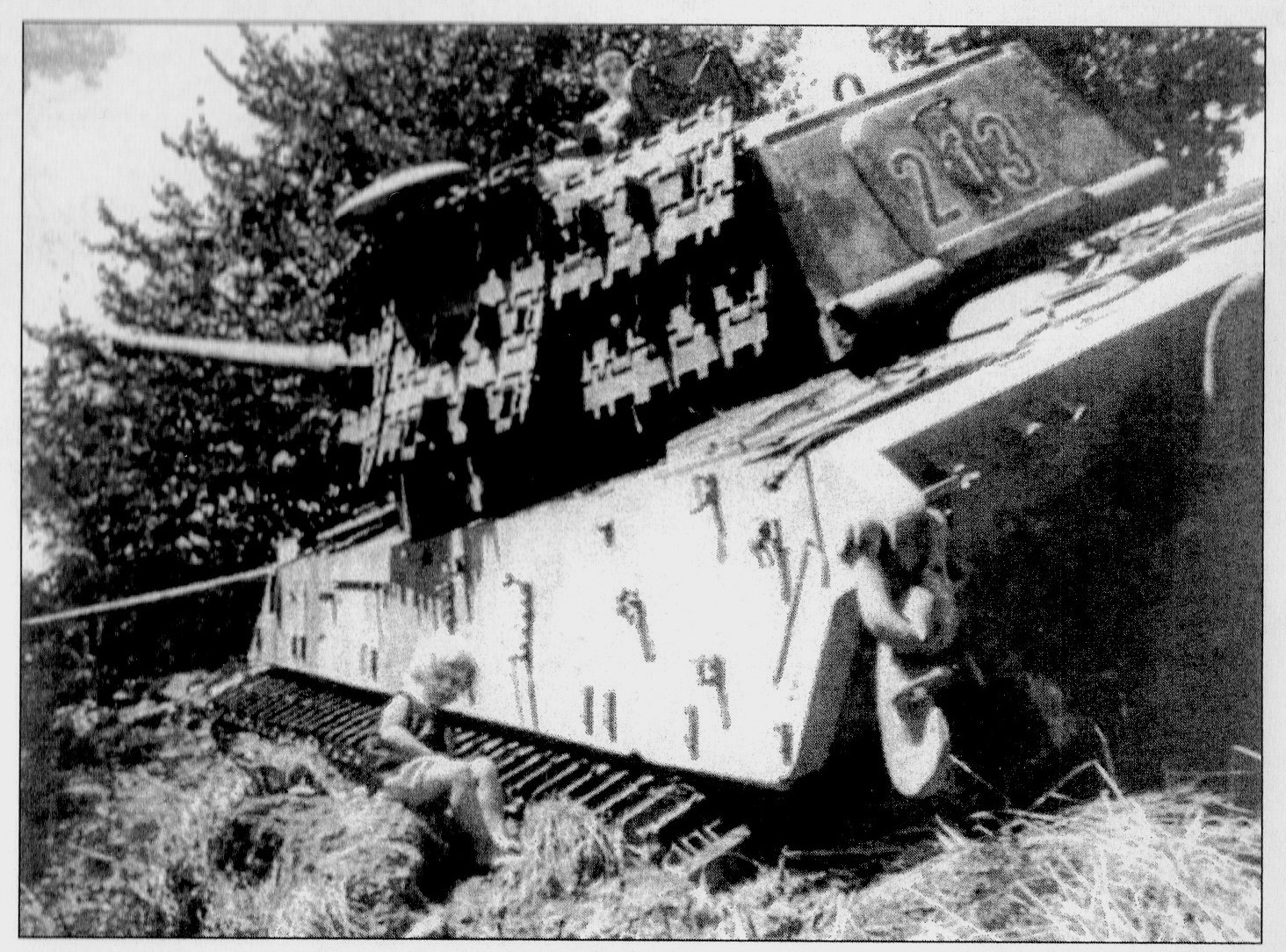 As for the sPzAbt 503, they reached the American lines on 10.5.1945, where the commander ordered the unit to be disbanded, heavy vehicles to be abandoned and its members to seek their own way to American captivity.

After the war was over, the first vehicle (112) was used by US soldiers to train bazooka fire and after 1946, it was towed away and melted for scrap. The second vehicle was also towed away and scrapped in 1947, finally ending the short life of some of the heaviest armored vehicles to be operational in WW2. According to V.Francev, the 3rd ARV Platoon of the Czechoslovak army recovered 5 King Tigers in total after the war. One was allegedly transferred to the Milovice training grounds, where it served as a heavy armored recovery vehicle long after the war.