the following info has been found in the VSAM (Verein Schweizer Armeemuseum, Switzerland), credits go to Vollketten. I am not sure this was ever published in English anywhere, so – another premiere for FTR :)

Now, you might recall what the G-13 is – that’s right, it’s the modified post-war Jagdpanzer 38t (“Hetzer”), built in Czechoslovakia for the Swiss army. Between December 1946 and February 1950, 158 were built and sent to Switzerland, where they served until 1971-1972, when they were replaced by the Centurion tanks. From that point on, many were sold to the collectors and even more were converted to look like the wartime Hetzers for museums, private collections and movie prop purposes. The majority of private “Hetzers” currently are converted G-13 vehicles. 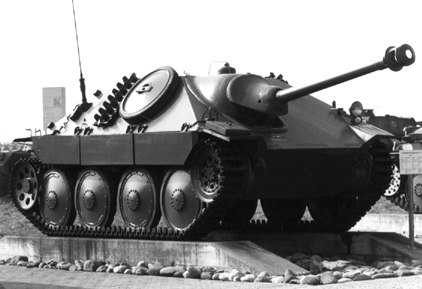 You can tell the G-13 from a Hetzer by the muzzle brake (German Hetzers used PaK guns, G-13 used the 75mm StuK 40 guns, the Swiss tanks also have different engines). While effective and relatively cheap to build, the Jagdpanzer 38t (I hope history buffs can forgive me the use of the word “Hetzer” – no, the Japa 38t was never called Hetzer historically) was also not exactly high-tech and in many first world armies, it was supposed to be replaced by either tanks, or other, more powerful self-propelled guns (such was the case of Czechoslovakia, using the SD-100 SPG). A question arose, what to do with the Hetzers then, because there were quite a few around.

In Czechoslovakia (and I am adding this so you see that the development went through similiar ways), following proposals were made:

In Switzerland, they did not reach the similiar conclusions, but they did consider using the G-13 for a self-propelled gun. The reason for this was simply the fact that the G-13 was available for a very cheap price from Czechoslovakia, while their own artillery-field (SPG) development (the Nahkampfkanone program) proved to be quite expensive. This project from 1946 however did not pass the proposal stage, as the army in September 1946 decided to order all the G-13 in their TD configuration. It is not clear whether this SPG proposal first came from the Swiss, or the Czech side. The Swiss nevertheless continued to work on in until 1947, when the program was cancelled.

The 105mm howitzer was apparently the same type as the one used in Nahkampfkanone 1 (10,5cm Haubitze 42)

And here, in comparison, how did the Czechoslovaks solve the same issue (November 1946) 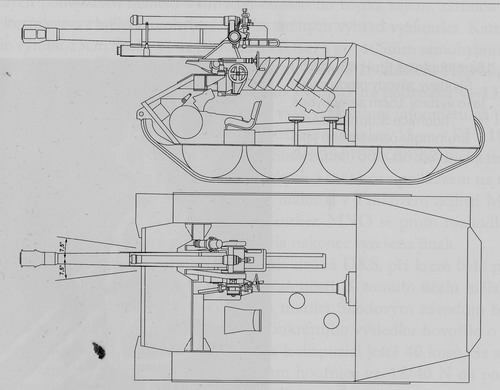