today, we’re going to have a look at another Czechoslovak post-war project, although this time, it’s from the 80′s. It was developed under the code name of STROP (“ceiling”). 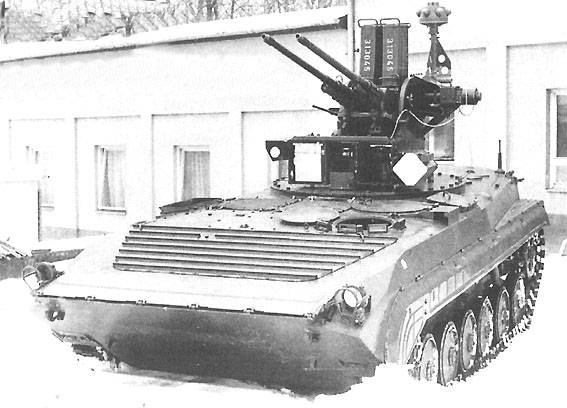 By the time the idea that the Czechoslovak army should get a new AA vehicle was mentioned in the 70′s, the army was still equipped with the legendary vz.53/59 twin 30mm self-propelled AA autocannon on Praga chassis, also known as “Ještěrka” (lizard) – why was it legendary? This vehicle was extremely rugged and found its way all across the globe. This wheeled SP-AA vehicle did however some notable flaws, that were relevant to the Czechoslovak army. For starters, it could be operated in areas affected by WMD’s. Its targetting system could not be connected to the effective command structure to the army and the gunner of the vehicle is practically exposed to shell fragments and small arms fire.

And thus an idea was born to provide the army with something more effective in the AA role. However, the research was complicated, took time and so it was only in 1981 when it was finally decided to properly modernize the aging “Ještěrka” AA vehicle. The development was further complicated by the fact that the at that point, indigenous AA autocannons were not being developed for quite some time and that the electronics industry was not properly developed either. 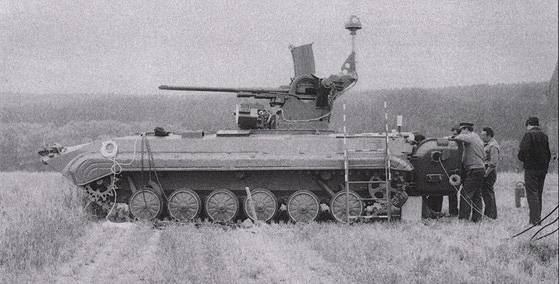 In the end, the task to create a new AA vehicle was given to the Research Institute 010, specifically its 01 Department in Slavičín, in the cooperation with Research Institute 060 in Vyškov and other 010 departments. The project recieved a code name “STROP”. The task for these institutes from 1982 was “to propose a modern AA system, that can be manufactured from parts provided by Czechoslovak industry only and by the end of 1984 to build and trial a prototype”.

The demands from the army were following:

The vehicle was to consist of:

- a lightly armored chassis, based on a modified BMP-1
- a turret system, consisting of two turret parts linked together, autocannons, targetting systems and servo drives
- fire control system for the operator
- primary power sources, such as batteries and a generator

The prototype of the vehicle was based on a regular BMP-1 with a turret removed. The hull was somewhat modified as well. The relatively bulky fire control system was inserted inside the vehicle compartment. BMP-1 was chosen as a platform because it was readily available, it did fit the criteria required (WMD protection) and the army had experience with it already. Following changes were made to the hull:

- removed all the equipment inside the squad compartment, such as air filters and periscopes, the holes after them were covered
- removed the smoke generator and the middle fuel tank, reducing the fuel capacity from 460 to 120 liters
- moved the vehicle batteries to the squad compartment
- removed the commander vision devices, his seat and other communication equipment
- strenghtening the hull of the vehicle by welding an additional “skeleton” on it for improved structural integrity
- installing a turret ring from the T-55 tank

Driver’s compartment was not changed. The prototype turret was practically the same as on the “Ještěrka”. The cannons (30mm) were practically unmodified, although in the future, it was proposed to replace them with something new. The manual fire controls of the original system were removed and new, automatized fire control system was attached to the turret. The system was extremely complicated and required a lot of trials. All in all, over 400 trials were performed. In the end, the parameters of the guns remained the same as on the earlier “Ještěrka” design (the guns were not modified, because it was decided they would be eventually replaced anyway).

The gun turret could traverse to 180 degrees to each side. The turret could turn as fast as 100 degrees per second in traverse (and 60 degrees per second in elevation). The maximum range of the TV targetting device and the range finder was 7 kilometers (under ideal conditions, it was possible to track a MiG 21 at 11 kilometers though). It was possible to start firing after 6 seconds from the point of target acquisition. The maximum firing distance was 4000m on target closing towards you, the effective firing distance was 1500-2000 meters.

First trials took place in 1984, more trials a year later. In the end however it was found that the BMP-1 with 6 roadwheels does not have sufficient carrying capability – a prolonged chassis with 7 roadwheels would have to be created, or the vehicle would have to be moved to a platform with wheels. And so, the prototype did not fulfill the expectations, but the experience served the developers well in the future. Project STROP was cancelled, but later on, another project – STROP II – was concieved, this time on a wheeled T815 truck chassis.