T-13 Hornet B was a heavy eight-wheel armored car/tank, developed in the late 30′s by Trackless Tank Corporation. This company from New York started to work on the desing of this fast, heavy wheeld gun carrier in 1937. It was a private activity, not supported by the US Army and the development was led by the president of the company, Floyd del Brown. In 1940, this design evolved into the Hornet Model B High Speed Trackless Tank. 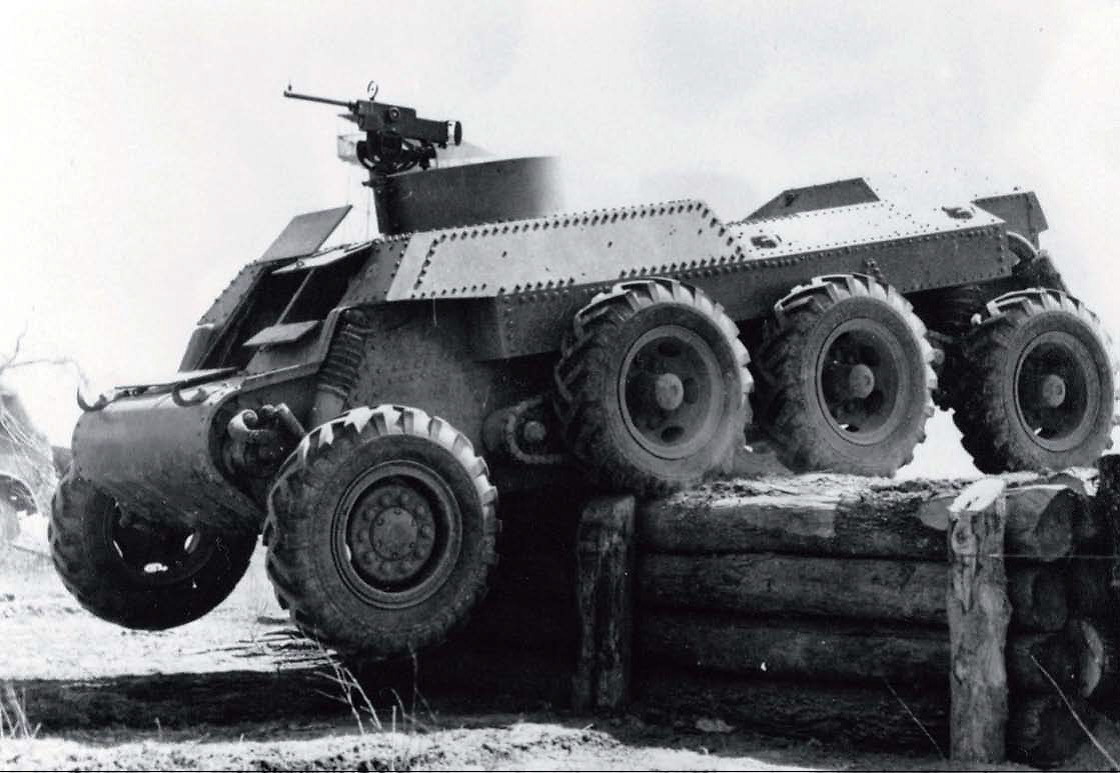 The Hornet consisted of roughly 80 percent of standardized and comercially available parts. It had eight wheels and a riveted armored hull. The rear six wheels were propelled, making the vehicle 8×6. The wheels were attached independently and were equipped with shock absorbers. The Hornet had three possible engine options – Continental or Wright gasoline engines or a Guiberson diesel, but the prototype was equipped with a Guiberson 9-cylinder T-1020 265hp engine, which was mounted in the rear of the vehicle. The driver was sitting in the frontal left part, the right side was given to another crewmember, but the entire crew compartment design was judged as completely unsuitable for the purposes of war. The Hornet weighed 7,5 tons (including the turret) – the prototype however did not have the turret mounted, instead it had a small copula with a machinegun. The vehicle was 2,5 meters wide and 1,9 meters tall (without the turret). 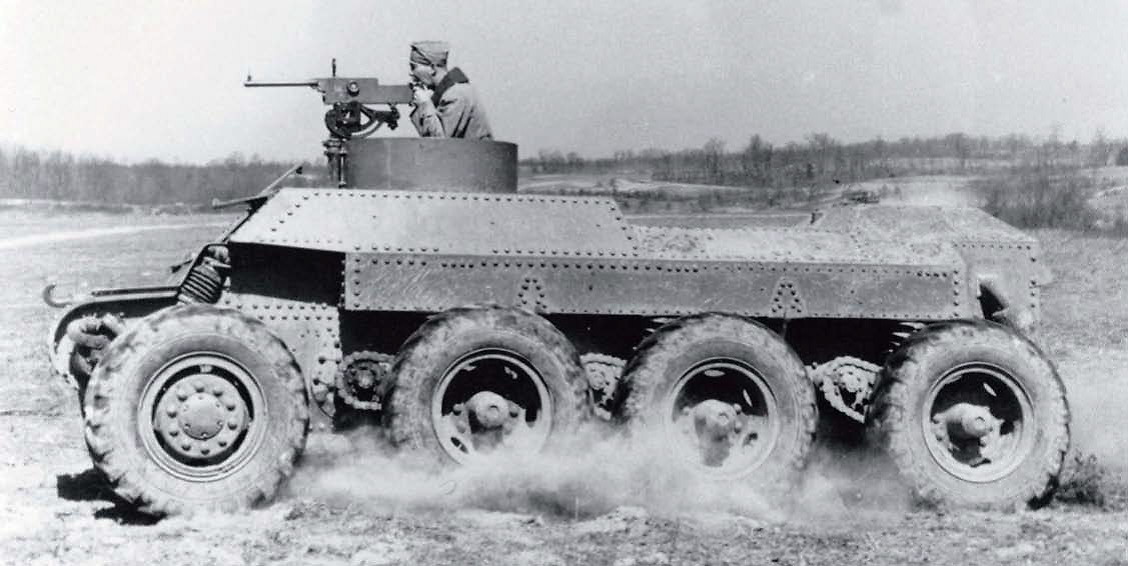 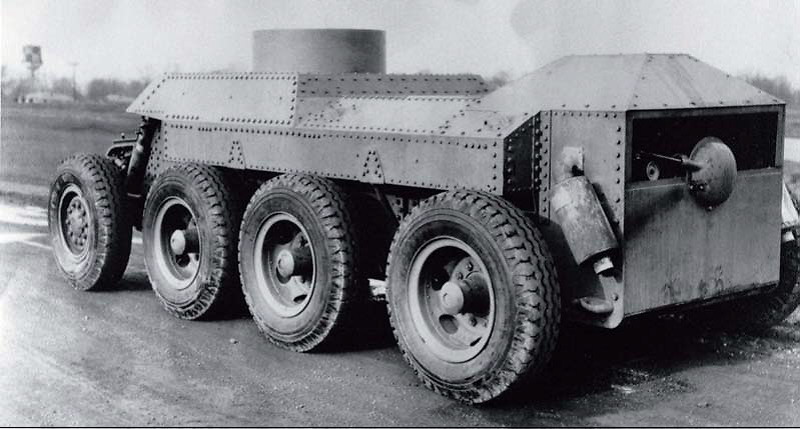 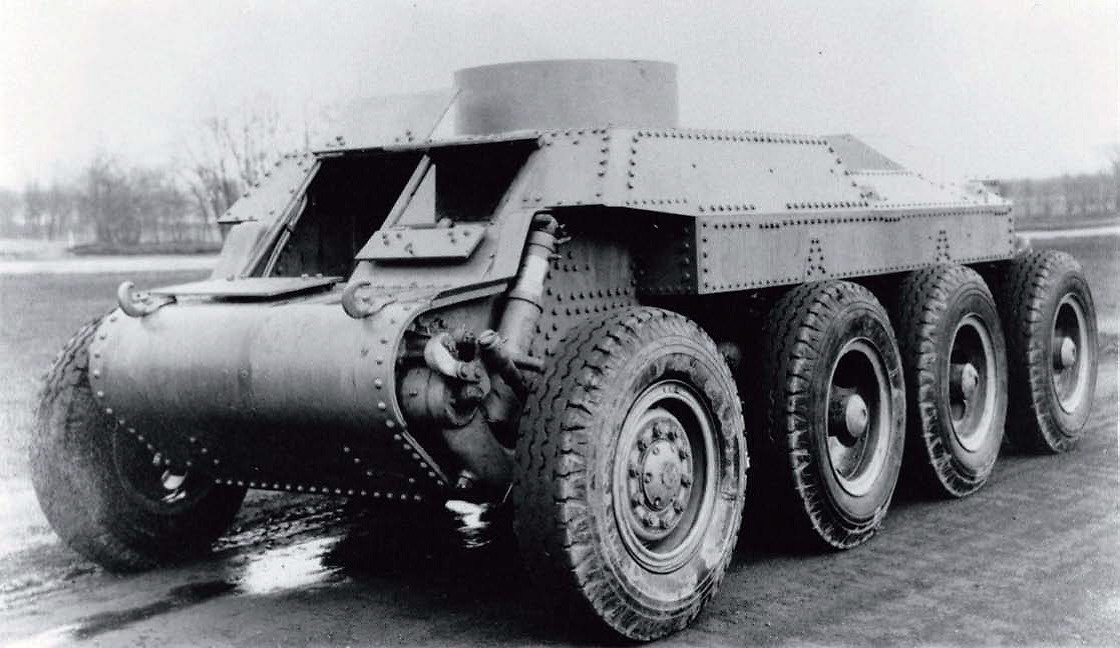 Hornet Model B had a 12,7mm thick armor and the prototype finished in October 1940. It was trialed for the first time on 24.10.1940 on Long Island proving grounds. The vehicle was also introduced to the British Purchasing Commission (BPC). Another presentation took place on 15.11.1940, this time in front of three representatives of the Canadian Army and Lt.Col.P.S.Bloweye from the BPC. While his final report did note that the vehicle performed well, he also expressed his doubts about the performance of the heavy armored car, when compared to the 6×6, 4×4 armored cars or the M2A4 light tank. He did believe the Hornet to be too heavy and expensive and saw no immediate use for it in the British army.

In the meanwhile, the Trackless Tank Corporation company was negotiating with other firms about the production of the Hornet – including Ward Safe & Lock Co. and American La France, but the negotiations were not successful. In January 1941, negotiations were also started with Huber Manufacturing Company from Marion, Ohio.

The Australians were interested in the Hornet as well ever since 1940, since the Australian government, desperate to get their hands on modern armored vehicles, were looking for them in Britain and the USA. BPC was kind enough the pass on the Hornet documentation to its Australian Division and from there, the data got to Australian authorities. At first, Australia was very interested, since the landscape of the country was ideal for the vehicle class represented by the Hornet. In September 1940, they even passed on their conditions, price demands etc. to Washington, but in the end, in 1941 they chose “more traditional” solution. The Australian interest however was what sparked further Canadian and American interest later on. In May 1941, the Canadians ordered one vehicle for trials and a production run of 17 vehicles later on, there was also further development for the US Army. By the end of 1941, at least two improved Hornets were manufactured by Reo Motors in Lansing. The Hornet, this time with a welded hull, recieved the official designation of T-13.

The T-13 was armed with a .30 cal machinegun in the hull, a 37mm gun and another .30 cal in the turret. The original Guiberson diesel was replaced by the Continental W670-9A 250hp gasoline engine. There was even a heavier 75mm gun carrier version developed by the end of 1941 at the Fort Knox army base – this project reached at least mock-up stage and one prototype was apparently partially built. However, the USA entering the war ended the interest in this interesting vehicle in favour of more conventional tanks. Further fate of the Hornets is not known, however one prototype survived at Aberdeen proving grounds until the war in Korea, when it was dismantled for scrap. 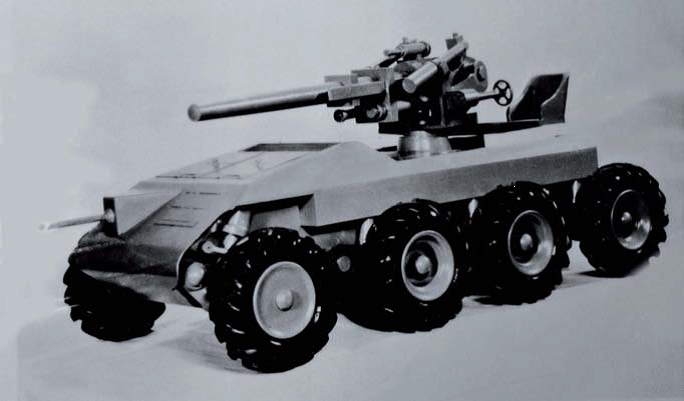