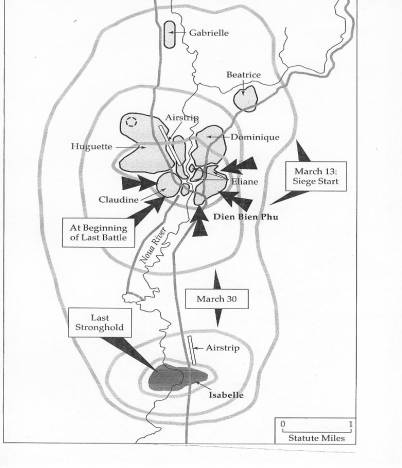 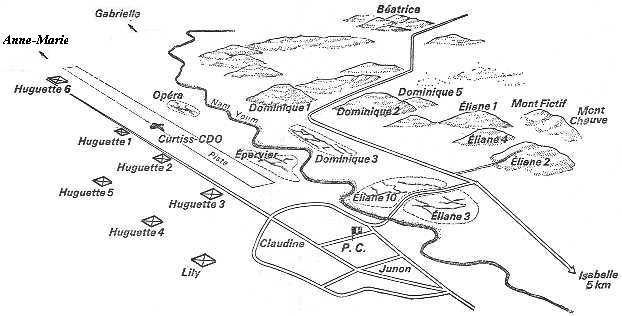 Continuing from the last part.

The French tried to clear the road, connecting the main base with the Isabelle position. The strongest attempt was undertaken on 24.3.1954, during which Posen was hit by an RPG, but the damage done was not major and noone of the crew was wounded. The French also organized other operations – their goal was to destroy the AA positions around Dien Bien Phu in order to relieve the French aircraft. The AA around the base was very active and was causing massive losses to both combat and transport French planes. Largest such operation happened on 28.3.1954 and two batallions of French paratroopers participated in it. Their target was the AA position in one abandoned village by the name of Bang Ong Pet, 2,5 kilometers west from Claudine. The attack was supported by heavy French artillery fire and was successful, the French destroyed 7 high caliber MG’s and two 37mm guns. However, while they were dismantling the guns, the paratroopers were attacked by the Vietnamese soldiers from 888th Batallion of 176th Regiment and were gradually pushed from the village, their losses counted 20 dead and 72 wounded. Their situation was critical, but at that point, the Chaffees from Lt.Préaud’s platoon crossed six kilometers of open terrain and attacked the Vietnamese troops, blunting the spear of the Vietnamese assault and rescuing the beleagured paratroopers.

Second phase of the Dien Bien Phu battle began on 30.3.1954, when the rain stopped and the Vietnamese started shelling positions Dominique and Eliane. After that, 12 thousand men of the Vietnamese 312th and 316th Division charged into battle. The fighting was brutal and the positions changed hands more than once. In the morning, the fighting died down and dozens of Vietnamese, trying to flank the Eliane-4 position, were killed by the tank fire. 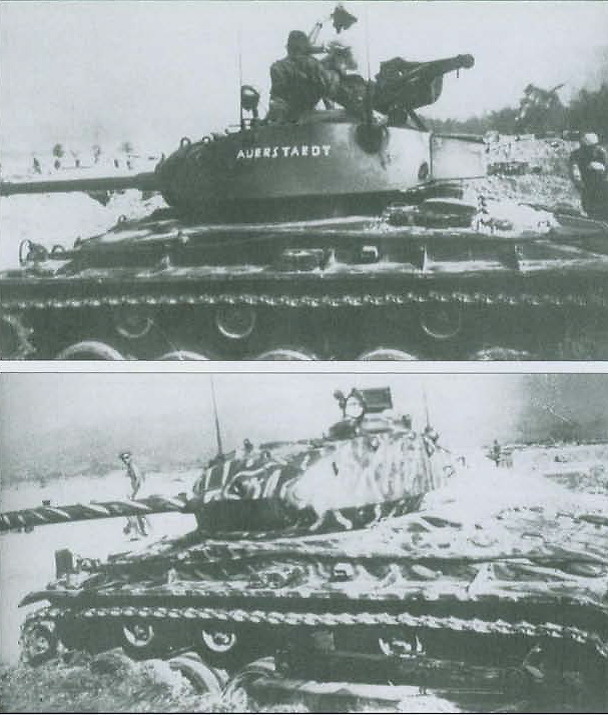 The tanks were also tasked with leading the counterstrike. Losing the Eliane sector (specifically, Eliane-2) caused a disaster, because it brought the landing strip and the main base in range of Vietnamese guns. That’s why the best units the de-facto commander of the defense, Colonel Langlais, had to his disposal, were assigned to this operation, including the elements of the 8th Paratrooper Batallion, 6th Colonial Paratrooper Batallion of Major Bigeard, 5th Vietnamese Paratrooper Batallion and 3rd Foreign Legion Regiment. The attack started on 31.3.1954 at 10:30AM. The 8th Batallion advanced on Dominique-2, 5th and 6th Batallions advanced on the key position, Eliane-1 – the tanks were supporting this part of the operation. The Legionnaires advanced with the support of 3 tanks towards Isabelle, but got only as far as the Bang Kho Lai village. There, they ran into the 54th Regiment of 304th Viet Minh Division and within the space of 45 minutes, they lost 15 men (with 50 more wounded) and were forced to retreat. Neumach Chaffee was hit in the turret from an RPG, but the crew managed to drive it back towards the initial positions.

The hardest fighting took place around Eliane-1. The paratroopers managed to strom the hill, but their losses were high. This included the tanks as well – as soon as they reached the top of the hill, they came under heavy fire from RPG’s and 57mm Recoilless Guns. Ettlingen was hit six times by the guns and Smolensk was hit twice, but the damage done to them was not heavy. Other tanks however were less lucky. Bazeilles started burning, the commander of the escadron, Captain Hervouët, was seriously injured and the commander of the platoon, Corporal Carette, was injured as well, when his tank was hit to its turret by an RPG. Platoon command was thus passed to Sgt.Boussrez. But apart from taking losses, the tanks influenced the victorious battle outcome decisively by destroying the enemy strongpoints. In the night on 31.3.1954, the Vietnamese renewed their attack on Eliane-1 and Eliane-2, but thanks to the fire support of three remaining tanks and the French air strikes, the position was held. French air force proved to be a huge advantage here – its planes flew no less than 250 sorties. The fighting for Eliane-2 continued until 3.4. and ended with the French holding the position. 300 French and 1500 Vietnamese soldiers died in the fighting.

More fighting took place around the western Huguette positions, attacked by 36th Vietnamese Infantry Regiment, the hardest hits were aimed at positions Huguette-6 and Huguette-7. In the morning, a platoon of three tanks supported the counterattack of one company of 5th Batallion. The appearance of tanks caught the Vietnamese off guard, they panicked and abandoned their positions, but the victory was short-lived, as the paratroopers too were forced to abandon the conquered positions, when they came under strong mortar fire. At that point, Huguette-6 became the flashpoint of the fighting, with 30 legionnaires attacked by 4 entire batallions of Viet Minh from the 141st and 165th Regiment. The defending legionnaires called for aid and on 5.4.1954, at dawn, two tanks and the paratroopers from 8th Batallion went to relieve them. During the fighting, Conti (commanded by Captain Hervouët, his body practically covered in bandages) drove over a landmine and was immobilized.

Posen with Corporal Ney in a defensive position 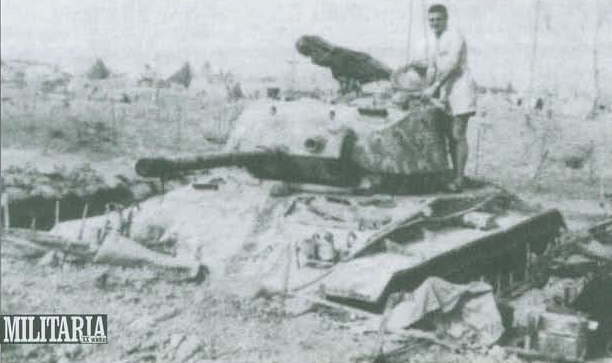 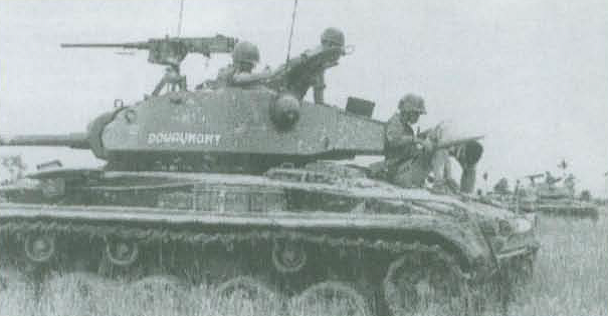 Hervouët was wounded again and this time, he had to give up command for good. 2ndLt.Mengelle, who, after Ney was wounded and Landois killed, became the only tank commander in defensive position left, became the new commander of the armor. After the fighting for Huguette-6 was over (on 4.4.), the damaged Conti tank was positioned as a fixed emplacement at the southern end of the air strip, near the bridge over Nam Youm river. Smolensk, damaged in the Eliane fighting, was converted into a fixed emplacement as well. The fighting for Huguette did cost the Vietnamese 2800 more dead and Giap once again had to stop attacking. Just like before, this pause was used by the French to dig new trenches, to conduct several smaller attacks around Isabelle as well as one big counterattack, aimed at re-capturing Eliane-1. Supported by artillery and the remaining tanks, French forces did indeed recapture the position on 11.4.1954, but the price was high – 200 men. The fighting for Huguette-6 was re-kindled as well and it went on until 23.4.

At that point, the situation of the Dien Bien Phu base became critical. Since the vanguard positions were captured by the Vietnamese, which brought them to position to start shelling the airstrip itself, the base could not be properly supplied by air and its territory shrunk to 1,7 x 1,3 km. The fatigue of French solders played bigger role every day. On the other hand, Giap was continuously strenghtening his units, he also started using the BM-13 rocket launchers (the famous “Katyushas”). The all-out assault of Viet Minh forces began on 1.5.1954. Reinforced by fresh units, the Vietnamese attacked all across the front. At that point, all the tanks left were used as fixed positions with no room for maneuvering. Material attrition caused damage to three of the Chaffee guns – during the battle of Dien Bien Phu, all the 10 Chaffees together fired over 15 thousand shells. Despite the heroic French efforts, one position fell after another and the base itself fell on 7.5.1954. The French tank crews fought until the end and destroyed or damaged their tanks before they fell in the hands of the enemy. In the end, the Vietnamese managed to repair only one Chaffee and use it for propaganda purposes later on.