Part 1 of Swiss tanks gave a quick run down of some light and medium tank options for Switzerland. In this part we’ll have a little look at some of the tank destroyers, the most famous of which is the G-13, ‘The Swiss Hetzer’. There is more than just that, but because there is so much, it will have to be in more than one article. So expect a part 2b with the post-WW2 tank destroyers.

During WW2, it could not have escaped the attention of the Swiss military that a method of defence against increasingly heavily armoured foreign tanks was going to be required. The current inventory of Swiss tanks at the time was very modest – although there were stocks of antitank guns, the need for ‘a big gun on some track’, to paraphrase Winston Churchill, was apparent.

In 1944, the Swiss used one of the Pz.39 tanks they had, which was fitted with a Swiss built Saurer CT-1D 125bhp diesel engine and they installed a 75mm cannon. A 105mm HB42 was also mounted experimentally. This vehicle was called the Nahkampf-Kanone (NK-1) 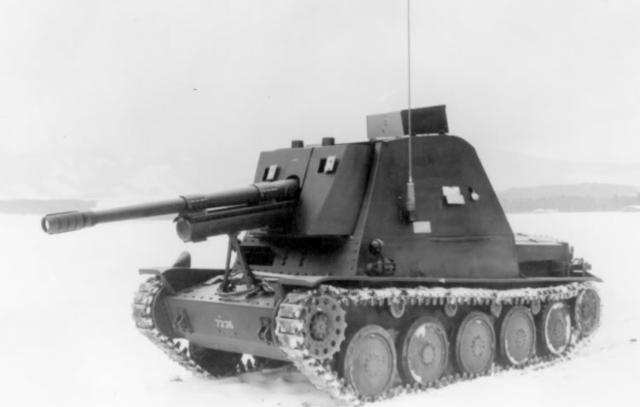 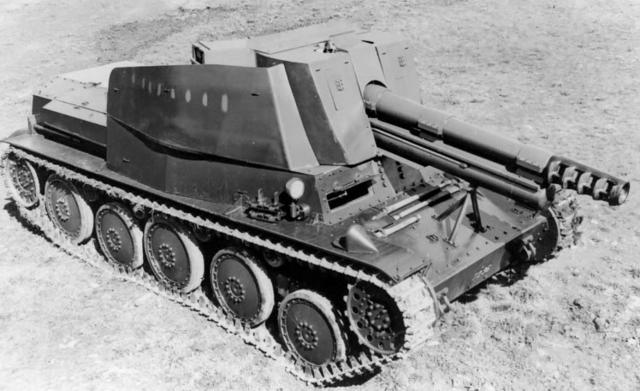 A better vehicle was still desired, improved with an enclosed superstructure to protect the crew, better armour, a more powerful engine and a larger, sturdier chassis. In 1945, the Nahkampf-Kanone (NK-II) version came with a Saurer CVDM V12 300hp Diesel engine. The upper structure was a very large casting and has a good ballistic shape. The NK-II was also fitted with a 75mm and at some point it was tested with a 105mm gun. 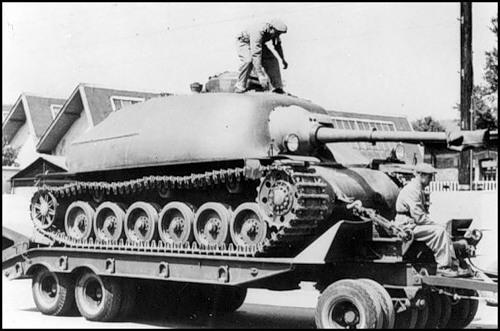 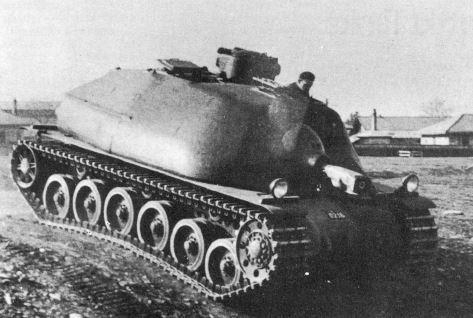 In September 1945, the Swiss received the first Jadgpanzer 38 (aka ‘Hetzer’) to Thun by rail. It was supplied by the French, who had captured it on the Western Front and was painted olive green prior to delivery. It lacked the standard German notek headlamp, but still mounted the Rheinmetall-Borsig Pak 39 L/48 7.5cm gun.

Following testing, more of this type of tank were requested from the Skoda tank works in Czechoslovakia and the next vehicles, still painted in the German ambush pattern camouflage with a new armoured housing for the StuK 40 7.5cm assault gun, a sheet-metal guard for the drivers periscope and the muffler from a Pz.39 (LTH-H) tank on the back were delivered. During firing trials the armoured side skirts were removed.

Production models of the G-13 (an official designation for the export Jagdpanzer 38t) did include neither this muffler nor the sheet metal periscope guard. Although delivery of the prototypes took place in late 1947, there were issues with the Czechoslovakian communist government not permitting the export, which meant that deliveries were delayed, but delivery of the final batch of 20 G-13’s to Switzerland was completed in the first half of 1950. The pieces delivered in 1950 were all painted in grey.

Even the delivery of the first prototypes was not without issues when in October 1947 one of the G-13s fell off the flat car during transport. 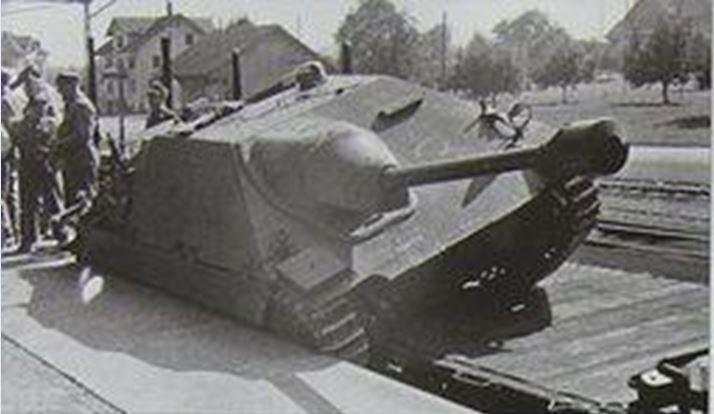 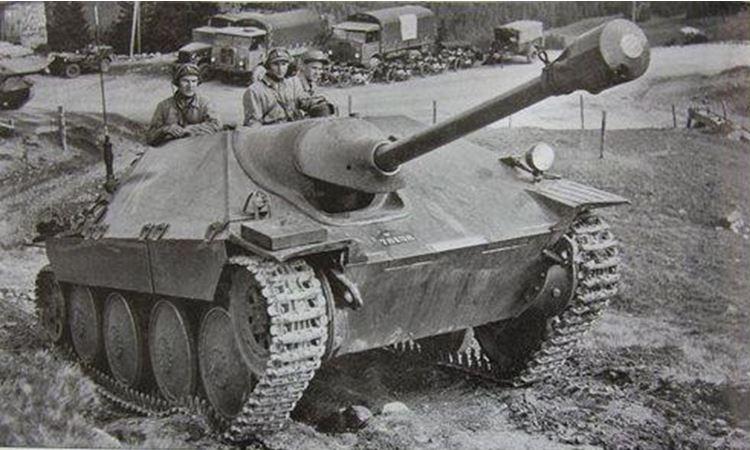 The G-13′s very much suited the requirements of Switzerland – being small, contained and powerful so much so that the final G-13’s were only retired from service in 1973.

Technically, the G-13 did not differ from the Jagdpanzer 38t too much – and it varied from batch to batch. Some of the early G-13 were literally Jagdpanzer 38t vehicles with their wartime PaK 39 cannons. Only later was the gun replaced by the StuK 40 with its distinctive muzzlebrake (simply because the StuK was available). The main difference apart from the cannon is the junk (wheels, tracklinks) hanging on the sides, which had special attachments made for the Swiss. If you see a “Hetzer” with a spare wheel and track links on the side but without the muzzle brake, it’s either one of the very early G-13, or a later G-13 made to look like German Hetzer (a lot of German “Jagdpanzer 38t’s” in museums” (typically Saumur, Sinsheim) are not the originals, but the Swiss conversions, just like a lot of the “German halftracks” come from the post-war Czechoslovak army). Here, a “Hetzer” from Saumur, in reality a converted G-13 with removed muzzle brake 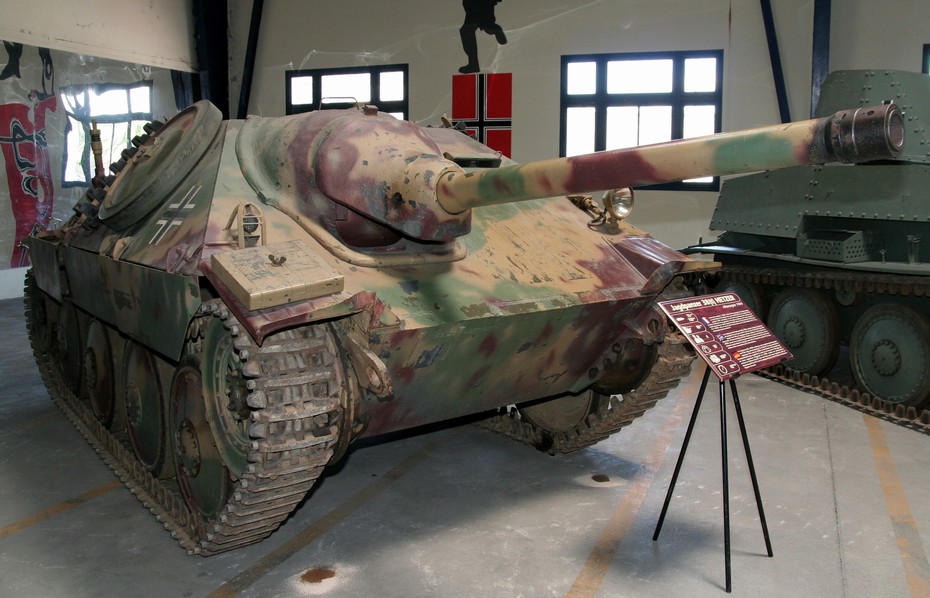