Damn the Armor, Full Penetration Ahead!

This is Part 2 of the Japanese Tank Destroyer Series, dealing with the concepts and prototypes of thinly armored tank destroyers developed by the Japanese. Due to the rather sprawling nature of the development, I’ll go by the specific projects.

A tank destroyer based on the Ha-Go chassis. Following the idea of Marder and Jg.Pz. 38 (t), it utilizes an open-back casemate to lower the height while also allowing a more powerful gun to be installed. It was originally planned to use a shortened version of 47 mm Tank Gun Type 1 (Model II), but development delays and stronger enemies led to the installment of a regular 47 mm Tank Gun Type 1 for tests, which were successful. 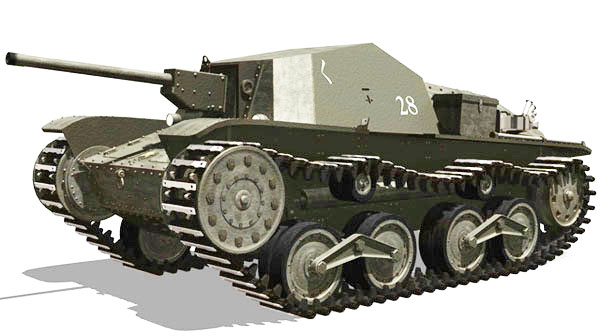 The basic form is that of a Ha-Go hull with the turret and superstructure removed. Instead, a open-back casemate was added, with armor of 30/12/0 mm (back was open). In addition, the track width was increased by 100 mm to 350 mm allowing for better mobility to the level of T-34. By resorting to these changes, the obsolete Ha-Go chassis had an extension of life, being converted into cheap and agile open-back tank destroyers.

The main armament was planned to be a shortened version of 47 mm Gun Type 1, called Model II. Originally designed for Ke-Ho, it had a muzzle velocity of 720 m/s, compared to 810 m/s of the original Model I. This was made to reduce the recoil for installation on lighter vehicles. While the gun was finally developed in March 1945 after three years (apparently other priorities delayed things), ultimately it was abandoned in favor of Model 1 due to penetration issues. Given that Model I was already having difficulties penetrating Shermans unless fired from the side, a weaker gun was out of question. Both 47 mm Gun Type 1 models had a side traverse of 10° and a depression/elevation of -15°/+20°

The crew consisted of commander (loader, radio operator), gunner, and driver. With a height of 1.82 meters, it will likely the second shortest vehicle after ELC AMX (assuming something else doesn’t come along). With this short height, concealment would have been high, allowing for defensive ambush attacks. One prototype was finished, with the war ending before serial production had begun.

A tank destroyer based on the Ke-Ho chassis. This is basically a Ho-Ni I (casemate in the same shape as Ho-Ni I) with a different chassis and weaker gun, to provide medium-range support on a faster chassis. It never went past paper concept due to there being only one Ke-Ho prototype produced by the end of the war.

At least according to the paper specifications, this vehicle had a combat weight of 10 tons when armed with the 7.5 cm Tank Gun Type 99 Model II. A major difference with Ho-Ru was that the chassis superstructure was preserved, the open casemate being added on top (apparently, this was to allow the troops to go into the hull when moving, for higher survivability). The gun would have had a side traverse of 15° and a depression/elevation of -15°/+20°, meaning quite comfortable . Add in the fact that if Experimental 57 mm Tank Gun Shin had been developed, you would have been able to fit it into the same mount as 7.5 cm Tank Gun Type 99 Model II, leading to a relatively decent tank destroyer. Combine this with the maximum speed of 50 km/h, and you have a speedy fire brigade in contrast to the ambush of Ho-Ru. 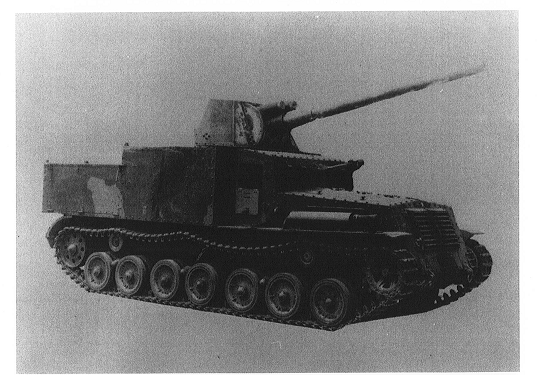 Sometimes you have the vehicle in your mind, but delays in technological development means you have to wait for the main armament to be developed. This was the situation with Na-To.

The necessity of a high penetrating 7.5 cm gun for use on a SPG platform was acknowledged in 1942, but it was not until 1944 that 7.5 cm Tank Gun Type 5 was fully developed at tested. Only then was the development of a lightly armored tank destroyer started, with the chassis of the Type 4 Chi-So medium tracked carrier being utilized. The resulting vehicle was 7.5 cm Anti-Tank SPG Type 5 Na-To. 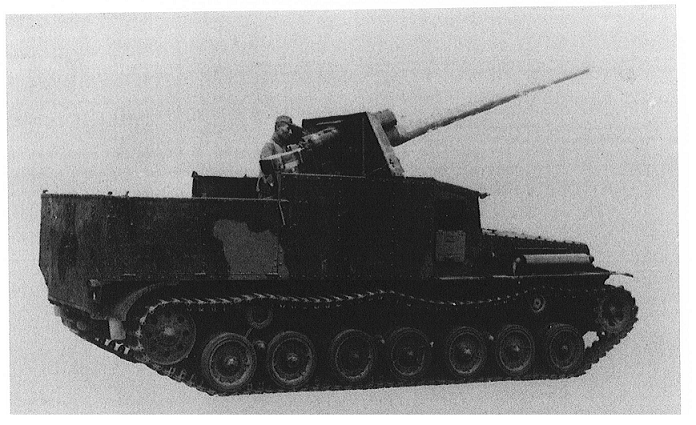 Na-To was a pretty flimsy thing, to say the least. Weighting 13.7 tons, it was 2.64 meters tall and 2.4 meters wide, maing it a somewhat tall for a tank destroyer. The superstructure had an open top and rear, with an enclosed armored drivers cab. The armor was practically non-existent, since front and rear were 12 mm while rear was 4 mm. The engine was Type 100 Kuurei V-8 of 165 horsepower, allowing a top speed of 40 km/h. All in all, it was a slower Pz.Sfl. IVc with a smaller profile.

Practically the only interesting thing was the gun. It was tested with both models of 7.5 cm Tank Gun Type 5, the manual loading Model II and semi-automatic Model II. Side traverse for both was 20°, and depression/elevation was -10°/+20° for Model II and -8°/+19°for Model I. With high penetration and rate of fire, Na-To could be a dangerous opponent for the US armor forces.

But this was not all. Before 7.5 cm Tank Gun Type 5 was developed, there was another gun that was considered: Experimental 7.5 cm Anti-Tank Gun Type Ge. 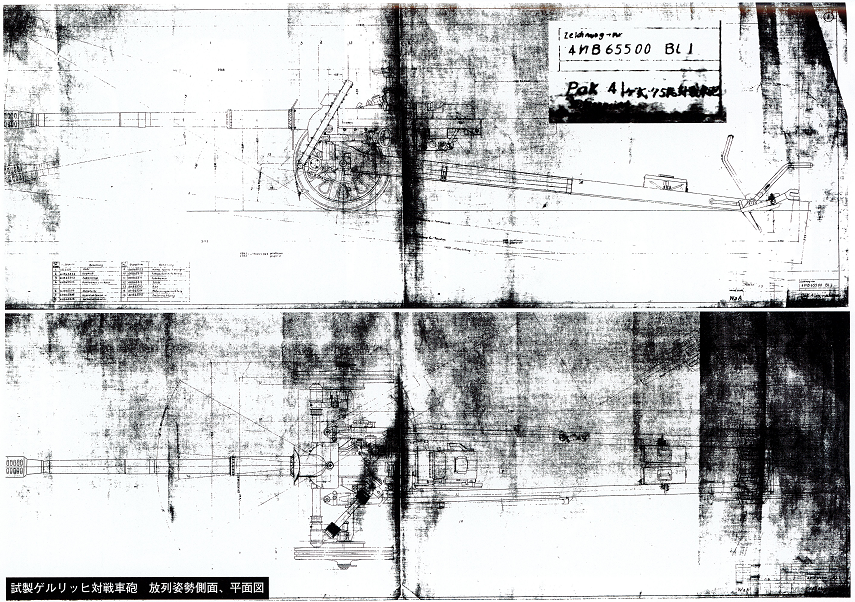 Blueprints and a sample of the German 7,5 cm Pak 41 had arrived in Japan by submarine in 1943. One of the largest anti-tank guns to rely on the Gerlich principle, IJA considered copying this gun, resulting in the Experimental 7.5 cm Anti-Tank Gun Type Ge. Testing of copied ammo resulted in penetrations at 100 meters of 190 mm for the steel version and 241 mm for the tungsten version (how reliable this is remains to be seen). With Japan producing 10% of the world’s tungsten production through Korea (which continued to be a world producer until the 1980s), resources wouldn’t have been a problem unlike in Germany. However, further development of the gun beyond the copied prototype was cancelled in 1944 after focus was shifted to development of Ta-Tan (Japanese HEAT). This was because even if Japan was swimming in tungsten ores, it did not have the industrial capacity to refine the ores and produce the necessary tungsten carbide. Basically, the fundamental weakness of Japan sank what could have been one of the most formidable anti-tank weapons of WW2.

Na-To was accepted into service in July 1945, and mass production was started in August. By the time the announcement of surrender was broadcast, work on 70 vehicles had been started, with 30 reaching 70% completion. 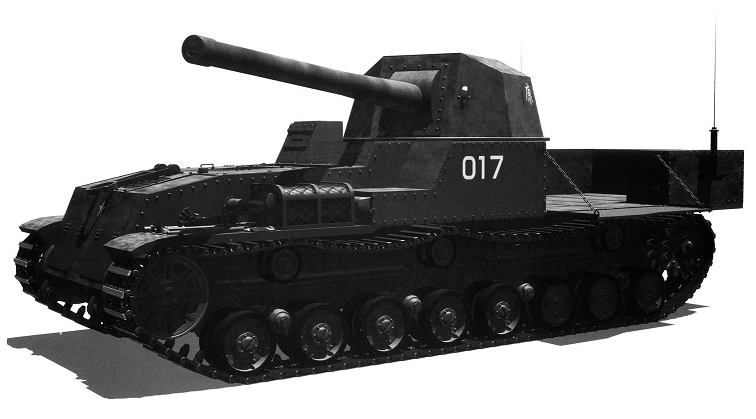 The ultimate open-top tank destroyer IJA was planning. In June 1943, development of a 10.5 cm anti-tank gun to counter the ever-strengthening US armor force was decided on, leading to the 10 cm Tank Gun Type 5 which was able to penetrate 150 mm from 1,000 meters using a 16 kg APHE round. Along with the relatively armored Ho-Ri, an open-top ATSPG was designed. This was Ka-To. 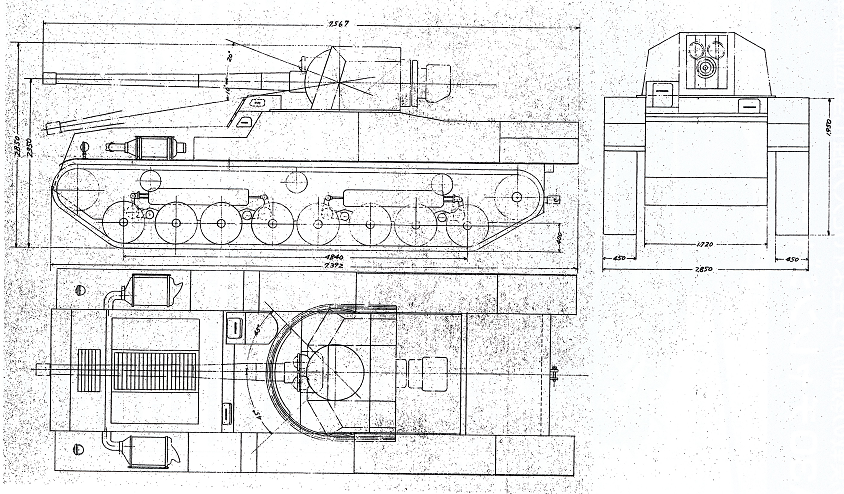 The general design was similar to Na-To. The 400 horsepower diesel engine was at the front, with the driver being between the engine and the gunner position. The 30 ton vehicle would be able to go up to 40 km/h, floating on a light ground pressure of 0.6887 kg/cm². Armor was very thin, 25 mm front, 20 mm sides and rear. The profile was also big with width and height of of 2.85 meters. The main saving grace would be the gun, which had a gun arc of 45° to each side and a depression/elevation of -10°/+20°. More importantly, while the gun was able to penetrate 150 mm at 1,000 meters with APHE, this was apparently made stronger with an AP shot, capable of penetrating 175 mm at 1,000 meters. All in all, this would be a vehicle built around the gun.

Mitsubishi was able to complete 50% of the chassis before the end of the war.

The basic design concept of Japanese open-top tank destroyers was sacrificing everything for the gun. With high penetrating weapons being supported by a thinly armored but mobile chassis, everything existed for the gun to bring destruction on the enemy. This idea was not so different from the closed-top counterparts, in that the gun was where everything was designed around…..