on the battlefields of World War 2, M5 Stuart was one of the ubiquitous tanks – but its career did not end there. After the war, it was used by many armies, including (for a short while) by the Czechoslovak one (although not actively). The Czechoslovak Stuarts never fired a shot in anger ever again, but one of them became the hero of one “special” operation after the war. 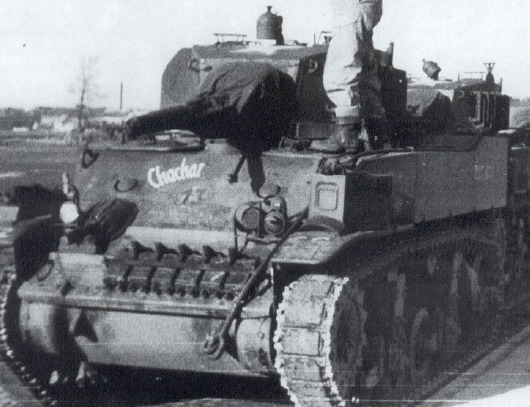 For four decades of oppression between 1948 and 1989, many people tried to cross the border illegally to escape Czechoslovakia, hoping to find freedom in the west. Most of those, who wanted to flee used relatively conventional means – in the beginning, they simply crossed the poorly guarded borders on foot, later they escaped as tourists (simply staying in the destination country for good or travelling further west) or they visited their relatives abroad. There were however cases (although they were relatively rare), when brave people used very unconventional methods to cross the more and more protected border. Several of these included the use of an armored vehicle (some were described in earlier FTR articles). However, there was only a single case where a real combat-worthy tank was used to punch through the borders.

This unique event took place in 1949 and the participants were the members of 23rd Tank Brigade. This cheeky plan was initiated and organized by Private Karel Schreiber (*1925). It was not his first escape attempt – he tried to cross the borders once already. On 21.3.1948, he left his unit without permission and in the night, he crossed the border near the village of Zadní Žďár. For unclear reasons however, he changed his mind and in the morning, he returned to Czechoslovakia and went straight to the police station in Svatý Kříž, where he confessed to everything. He was tried by a military court, which, after considering the aggravating circumstances of an active soldier leaving his unit, sentenced him to five months in prison. This life experience convinced Schreiber that this new “country of workers and farmers” is not for him and he started considering escaping again, this time for good.

On 9.4.1949, he went to a party, organized by his tank brigade members as a tradition before long military excercises. When the soldiers stopped drinking around midnight, the ranking officer, Captain Kroužel, invited Schreiber to his place. There, he told Schreiber openly that he knows about his past attempt to escape and of the problems it caused Schreiber, which included a career on permanent hold. He also admitted that he knows of internal military proceedings to purge the army of “unreliable individuals”. Captain Křoužel explained all this, because he wasn’t just some random officer. Born in 1920, he escaped the nazi-occupied Czechoslovakia first to Poland and after its fall in 1939 to France, where he entered the Foreign Legion. With it, he saw combat in Africa, he fought to nazis during the Legion retreat to Gibraltar, from where he was evacuated to England. There, he was transferred to the Czechoslovak exile military forces and with them (1st Czechoslovak Independent Brigade), he participated in the siege of Dunkerque in 1944. During his wartime service, he recieved several British and French military awards. After his return to Czechoslovakia in 1945, he continued to serve with the re-estabilished regular Czechoslovak army, but even he was starting to feel the pressure from the communists to leave the army in 1948 (anyone, who fought in the west was considered “unreliable”, the punishment for this in the eyes of the communists terrible offense were ranging from dishonorable discharges followed by years of the inability to find a decent job to years of inprisonment based on false charges, torture and sometimes death).

Kroužel openly told Schreiber that he wants to escape as well and made him an offer to go with him, since he managed to do it once already. The Captain suggested using the same route to escape, but wanted extra insurance against the bullets of the border guards: the armor of a tank! At the same time, he warned Schreiber not to trust some members of the units (he called them “regime rats”). The very next day, Schreiber talked about the offer with his friend, Corporal Jaroslav Pekárek (*1925). On 19.4.1948, both soldiers however recieved other news – they would be as “unreliable” transferred to another town and from a combat unit to a working unit (the working units served without arms and were used for hard manual labor, such as quarries, it was practically two – or more – years of slavery). This piece of information became the basic catalyst of the plan to escape abroad. They were inspired by Kroužel’s idea and they planned the theft of a Stuart light tank, that should suffice to protect them on their way to freedom.

They however felt the time pressure badly and thus decided to do it themselves, without the Captain. The final decisio was made during the train trip from their old unit to the new one. Instead of joining the new unit they were transferred to, they first bought some maps of the border lands and then, they took a train back to Bečov (their old tank unit was nearby). From there, they continued on foot and snuck to the army base under the cover of the night. They slowly crept towards the barn where one of the tanks, an M5A1 Stuart (No.65925) was kept. A guard was coming, but by the time he reached the barn, they were already inside the vehicle. The guard heard some suspicious sounds from the barn and called another guard to check it out, but they had only flashlights and saw nothing and so they continued their patrol eventually.

The peace and calm did not last however. A terrible roar from the barn attracted the attention of pretty much every soldier awake – it was Schreiber starting the engine of the Stuart and revving it. With a load crash, the tank rammed and utterly crushed the gate of the barn, racing as fast as it could towards the road, through which both soldiers planned to escape. The guards immediately called the commander, who ordered pursuit – one jeep and one truck full of soldiers started chasing the runaway tank. By that time, Schreiber and Pekárek did put considerable distance between them and the base and would escape easily, were it not for a cruel twist of fate – the tank engine started coughing and finally stalled. The soldiers were thus forced to disembark the machine between Kladská and Kynžvart in order to attempt to fix the vehicle engine. They managed to fix the tank and started moving again, but the pursuers managed in turn to catch up and started firing at the tank from the rifles. Some witnesses say that Pekárek fired back at them with his pistol, although he denied it later. Either way, the gunfire did nothing to the vehicle, ricocheting harmlessly from the armor.

At that point, another stupid accident happened – while driving, Schreiber managed to accidentally jab his arm at the gear shifting stick, not only stalling the tank again, but also wounding himself. The tank stopped near the Kynžvart post office. It was dark and the vehicle was quickly surrounded by their former comrades in arms. Pekárek panicked, opened the hatch and disappeared into the darkness while Schreiber was sitting alone in the driver’s compartment, desperately trying to start the engine again. He barely managed to do it and the soldiers started firing at the revving tank, that was accelerating quickly from the scene of the standoff. It turned out that this was to be the Stuart’s last breath – after a few kilometers, the engine died again and this time for good. The pursuers were practically on his tail, but the darkness helped. Schreiber jumped out of the still moving tank and hid in a ditch – despite the efforts of the soldiers trying to catch him, he was not discovered. After that night, he never saw Pekárek again.

On foot, Schreiber went back to Kynžvart, where he ran into a farmer, who gave him something to drink and showed him the way towards the border. He tried to follow the directions, but almost ran into a police patrol and had to return to the farm where the farmer helped him. He spent a night in the barn and after some time passed, he wanted to leave, but he was delayed by the farmer’s wife, who tried to keep him occupied while the farmer who earlier helped him called the police. After ten minutes, soldiers came and arrested Schreiber, transporting him back to Kynžvart.

Captain Kroužel was arrested as well, after Schreiber, who was likely tortured, confessed and told the soldiers about him and the talk they had. Both were sentenced in Prague on 24.7.1949 – Schreiber was sentenced to 23 years in prison for “grand treason” and other crimes, Kroužel was sentenced to 12 years for grand treason as well. Schreiber’s life ended tragically – the conditions in prisons for “enemies of the regime” were practically no better than those in concentration camps. He got ill and died on 17.3.1953.

Former Captain Bohuslav Kroužel’s fate was different – during a prison transport on 24.6.1949 (before his sentencing), he used the experience gained in the Foreign Legion, overcame the guards, escaped and despite a large operation to catch him, he managed to evade capture and possibly escaped abroad. From that point on, his fate was unclear, although the police did recieve some news in 1966 that he was allegedly living in London and working as a technician in some laboratories.

Jaroslav Pekárek managed to evade capture as well on that fateful night and escaped abroad. After crossing the border to Germany, he was intercepted by German border patrols and passed on to the American soldiers. He was debriefed for about a week by American intelligence agents and then sent to a refugee camp. Because he didn’t mind being a soldier, he signed up for the Foreign Legion. He recieved training as a tank commander in Algiers and after a few months, he was sent to Indochina as a Legion tank instructor (luckily for him, he did not participate in the Dien Bien Phu fighting). After France lost the Indochina conflict, he was transferred back to Algiers, where he commanded a patrol of 30 men in the south of the country, fighting the insurgents. During one such patrol, unit was ambushed by 200 enemy combatants. Pekárek was gravely wounded by bullets and shrapnels, but in last possible moment, he was saved by a legionnaire tank crew by being pulled inside the vehicle. The tank commander turned out to be Czech himself by the name of Rudolf Zbytek. They became friends and Zbytek visited him during his reconvalescence, but his wounds were so severe his military career was over. He was honorably discharged and recieved a soldier’s pension, enough to get married in France and live from that point onwards undisturbed by his past.

At least he would, if he didn’t try to sneak into Czechoslovakia in 1965, presumably to visit his aging parents. Instead of arresting him however, the Czechoslovak secret service (STB) tried to recruit him to spy for them in the west. In return, he would be allowed to visit his parents every year. The agents were tempted by the fact that there was a proposal for Pekárek to teach in the local military training center as an instructor, giving him access to sensitive military data. In the end however, Pekárek screwed them completely – each year, he, apart from visiting his parents, paid a visit to the agents as well, giving them absolutely worthless pieces of information and generally making fun of them by boring them with his (historically interesting, but from intelligence point of view pointless) stories from military life in Algiers and Indochina. In 1970, STB finally lost their patience and they did just let him go, realizing they would never get any useful info out of him. No details of his life after 1970 are known.

11 thoughts on “The Great Stuart Escape”