today, we are going to have a look at one of the last independent Czechoslovak post-war projects, the PM-1 flamethrower tank, built on the ST-I chassis, also known as the Jagdpanzer 38t “Hetzer”. 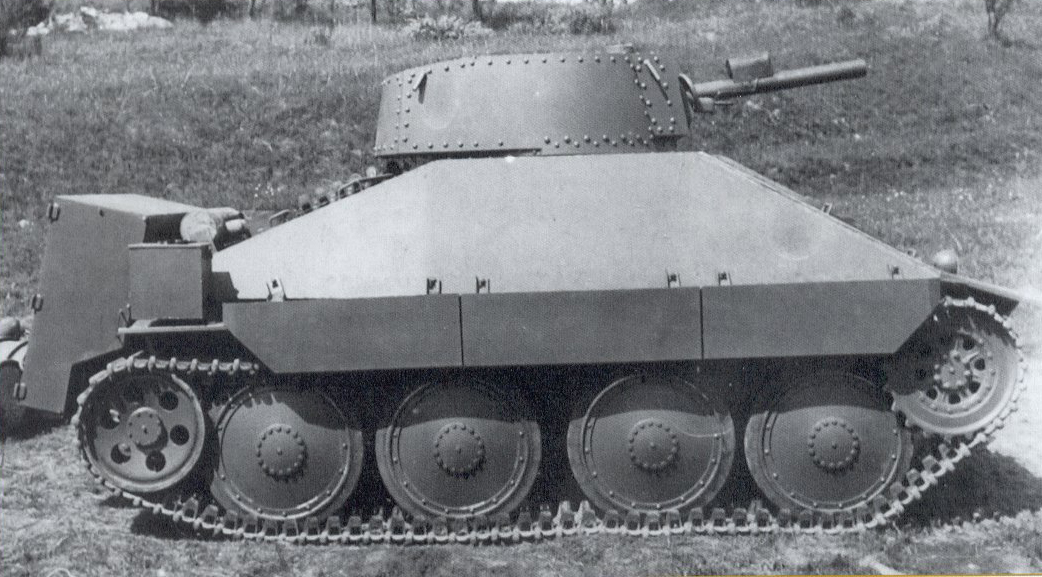 The tank flamethrower project itself started initially on a completely different vehicle. In 1946, the army demanded the TVP tank project to actually use a flamethrower as its secondary armament. This “feature” was removed from the project quite soon, but the army didn’t forget and so, in 1948, the 1st Department of the Army Chief of Staff decided that 75 ST-I tank destroyers were to be rebuilt as flamethrower tanks.

The ST-I tank destroyers were more or less modified Jagdpanzer 38t vehicles, produced after the war for the Czechoslovak army (since the original German tank destroyer was produced in former Czechoslovakia anyway). Some of the ST-I vehicles were even real wartime Hetzers – a few were used even in combat, repaired after the war. In 1948, Škoda Pilsen started to repair the first 30 chassis pieces, the rest was to be refitted by the Automotive Armory (1st) at Milovice. The conversion itself however was to be conducted by ČKD (the first drawing of the vehicle is from 6.11.1949).

At first, the vehicle was to be equipped with an indigenous flamethrower, produced by the Sigma pumpy n.p. company. The first trials of this device were conducted in October 1949, when Sigma created a prototype according to VTU (Military Technical Institute) specifications. The flamethrower had a 50 liter fuel tank, operating pressure of 50 atmospheres and 14-17mm wide nozzles. The flame initiator was taken from the German 1941 pattern infantry flamethrower (or from the vehicle version). The developers of this flamethrower also studied closely the design of the M4A3 Sherman flamethrower version, but according to their evaluations and tests, the German version was simplier and more practical. Another issue was the lack of the indigenous “Sh” flamethrower fuel mix – it had to be substituted by the German “Np” mixture. 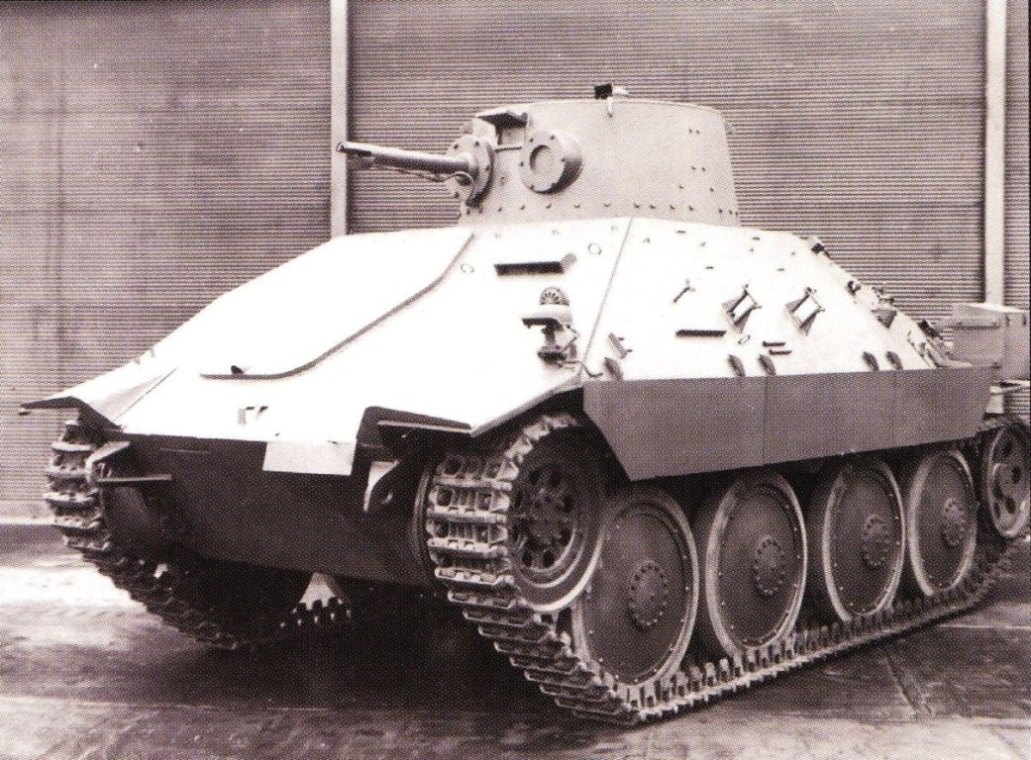 The chassis was designed relatively without difficulties. The hole, left after the gun was removed from the tank destroyer was to be covered by a 50mm plate, that was cut out from the wrecks of Panther and Jagdpanther tanks, collected in Milovice from all over the country. First optimistic estimates spoke about first 30 vehicles being available as early as in 1949 (and the rest in 1950), but it was not to be. There were delays and only in March 1950 were the first 7 chassis sent to Milovice to be refitted. Accordingly, the army reduced the amount of vehicles ordered from 75 to 53. The first prototype was actually completed only in February 1951. It was fitted with a conical turret and the German Flammenwerfer 41 flamethrower (along with a heavy machinegun Vz.37). The fuel tanks were actually in combat compartment on the right side of the vehicle in a box, that was covered with additional armor (this was generally judged as a bad idea due to crew safety). The vehicle was tested and the trials ended in failure – the reason was the insufficient range of the flamethrower (60 meters) plus a huge spread of the flame jet, that made the vehicle profoundly unsafe to operate for both the crew and especially the infantry around it. 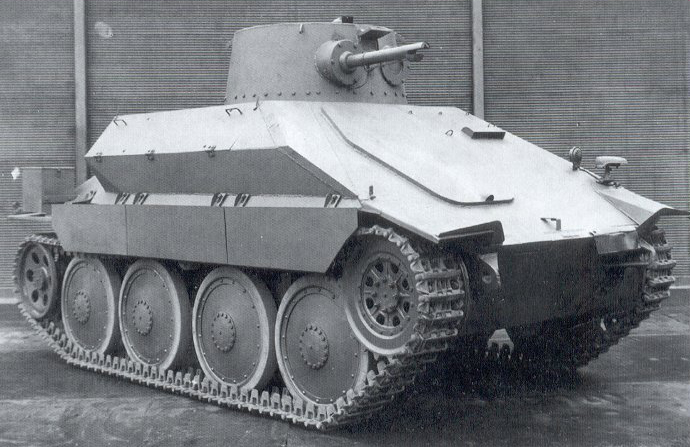 It took more than a year for another prototype to emerge. This time, it was equipped with a modified LT Vz.38 (Panzer 38t) turret – this turret had its commander cupola removed (it was thought that the vehicle was too tall even without it – 2,55 meters). The flamethrower was mounted instead of the original 37mm gun and could elevate/depress to 20/-8 degrees. The original ZB machinegun mount was also removed and was replaced by the Soviet-made DT from T-34/85. This solution was of dubious effectivity as well, as only 31 LT Vz.38 tanks survived the war and were available at the same time for turret refit and no more such turrets could be easily produced or obtained. The seven smaller pressure gas tanks (propelling the liquid) were moved to the back of the tank into a special armored container (its armor was 8mm thick), the fuel was stored in three separate tanks with the total volume of 1000 liters. N.p. Konstrukta Praha company was tasked with developing a new flamethrower, that would work without Palmitic acid, that was not available due to the import restrictions. Between 1952 and 1954, new “Sh” mixture was developed (80 percent gasoline, 20 percent BTEX, made thick by what was essentially a soap production waste) . With this mixture, the flamethrower had a range of 120 meters. 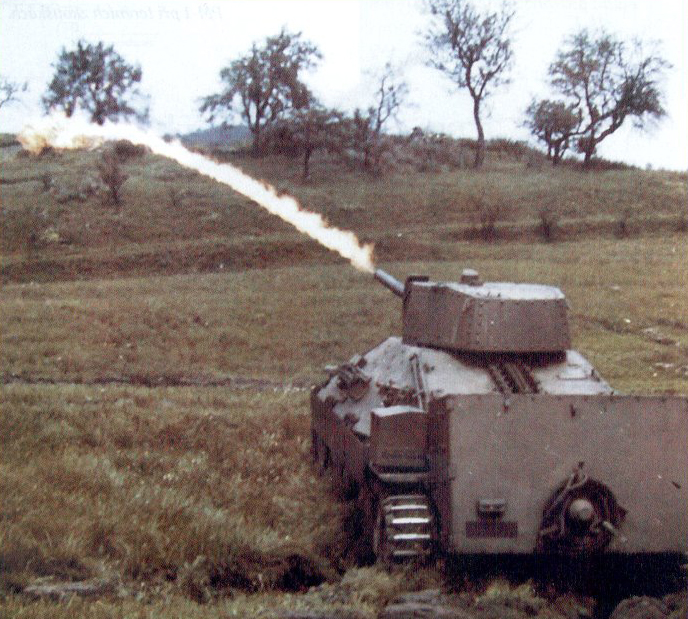 The new prototype was ready on 31st of March, 1953 and during the tests, the flame jet could reach from 90 meters to 140 meters. There were however other issues as well, including the long fuel refill time (up to one hour), issues with the flamethrowers release valves getting stuck and the unsatisfactory performance of the flamethrower mixture – by the end of July 1953, the deputy minister of defense, General Thoř, expressed his doubts about the project and pointed out that there is a need to develop something completely new. From July 1954 to February 1955, more tests were conducted (aimed to improve the performance of the flamethrower mixture), but after inconclusive results, in September 1955, the project overseer Gen.Jarolím recommended the cancellation of the project. Last tests were conducted in March 1956 (during which the flamethrower managed to shoot at 125 meters with the Sh mixture and 180 meters with the new ASN mixture), after which the project was silently cancelled, as the entire concept of the dedicated flamethrower vehicle was now considered obsolete. Both prototypes were unfortunately scrapped. 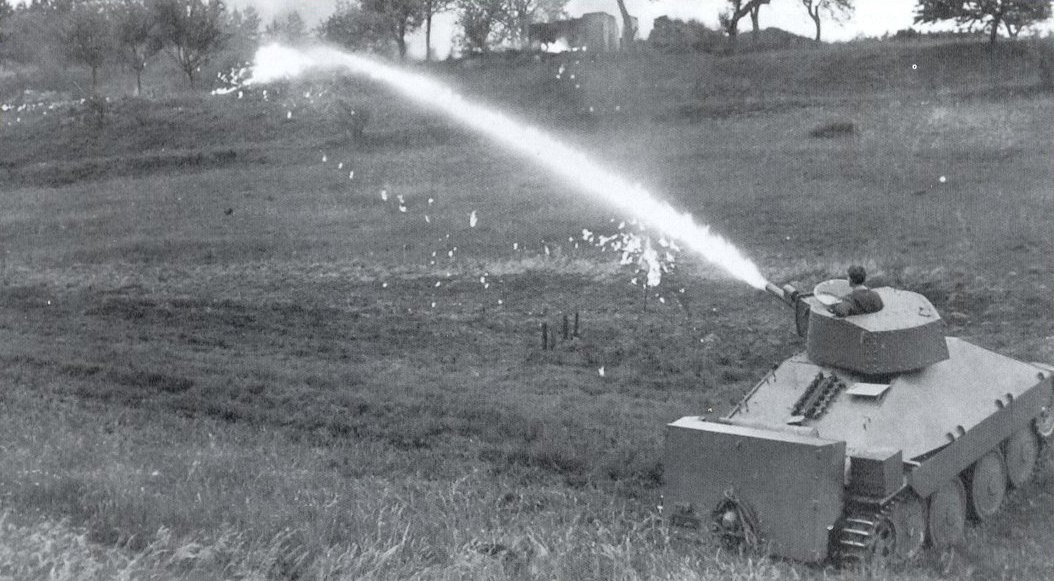