as you probably already know, the FV4202 will be replaced by the Action X Centurion near the end of the year instead of Vickers MBT. To put it mildly, I was not happy about that switch – instead of a fast, agile medium tank not unlike the Leopard, we’ll be getting another Centurion clone with a tougher turret, but unhistorical gun and mediocre mobility and I have my doubts whether such a vehicle will truly be viable on tier 10. We’ll just have to see.

Still, I am not the only one who was wondering, whether there is a way to bring the Vickers MBT into the game after all. Here’s a proposal for a line, compiled by several people, who like British tanks and want to see more of them implemented into the game, specifically (in no particular order) Listy, Okinoshima, Anglomanii, Xlucine, Ogopogo, Vollketten, Ohslowpoke and Dominatus (most are from US forums).

Now, I always said (and I still am) that a British light tank line is problematic, to put it mildly. There is a lot of lowtier stuff, but the issues start at tier 5 and continue right to tier 8, with practically every tier 5+ vehicle being either some obscure prototype or a paper proposal. That does not mean they are unhistorical or completely fake – nothing like that, but the line would inevitably consist of paper projects with a few exceptions. Is it worth it though? Can a factor of “cool” compensate for the lack of historical use? You be the judges.

Please note that all the vehicles in this list are known to Wargaming and that there is nothing in the list that would be automatically a no go for usual reasons (“too modern”, “too good/bad”, “unacceptable equipment/missiles”). Yes, we asked. Also note that unlike various fantasies such as the second British heavy line, this one actually has a chance of being implemented in one form or another.

Tiers 2 to 4 would be occupied by existing light tanks, following the usual British light tank pattern of good mobility, 2pdr gun and negligible armor. The notable candidates for these slots are two. First is the Tetrarch, which is already in the game – or rather its lend-lease Soviet version is. 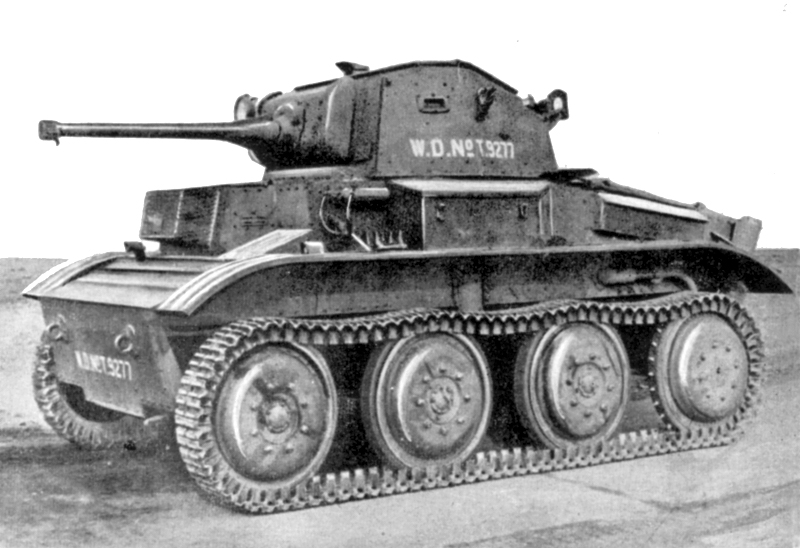 The Tetrarch was a very light tank – to the point of actually being used as an airborne vehicle (or rather gliderborne) by the British forces. It generally proved to be a failure even in this role, but nevertheless, it was an existing and serving tank. There are several gun options for it, including the 2pdr with Littlejohn adapter and you know how nasty that gun can be in the game. Another candidate for lower tiers would be the Harry Hopkins light tank. 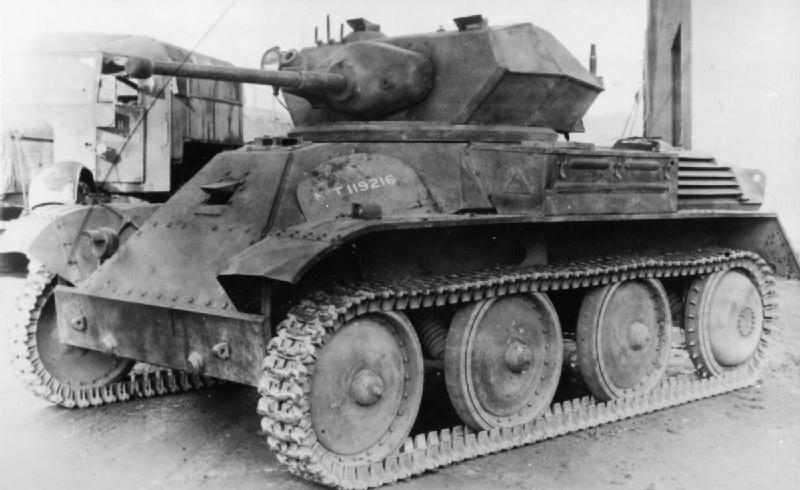 It was named after the US advisor to the British government (it is unclear why, the reason, as presented by David Fletcher was that Winston Churchill simply liked the guy). This tank was a successor to the Tetrarch – it was somewhat larger and heavier, but it still carried “only” a two pounder and for the conditions of WW2 battlefield, its armor was just as insufficient as the one of the Tetrarch. If the vehicle looks familiar to you, it is because it is in the game already, in a way – the Alecto self-propelled gun was based on Harry Hopkins chassis. Neither Alecto nor Harry Hopkins were used in combat however, despite some number of these tanks built. By 1945, it was completely obsolete.

So, these are tiers 3 and 4 I would presume. Tier 2 can be fitted with… well, pretty much anything, the British have literally dozens of tier 2 options, as there was a large number of light tank variants. Usually it was stuff equipped with .50cal Vickers HMG with no armor and mediocre mobility, but lines of tanks are not played because of their tier 2′s, right?

Now we are getting to the murky waters, so to say. From now on, things are going to be pretty obscure. AVR is theoretically a tier 5 candidate. The name stands for Armored Vehicle: Reconnaissance and it was a program from 50-60′s to equip Britain with a new type of recon vehicle. The program was called AVR and there were several versions of the vehicle, including a tracked version. Eventually, they would result in the TV15000 mobile test rig, but this is the concept stage. Now, Listy found the plans for this vehicle in the archives, but they are not mine to publish – I’ve seen them though and it’s quite detailed, enough for this vehicle to be implemented. The vehicle stages have roughly the following setup: 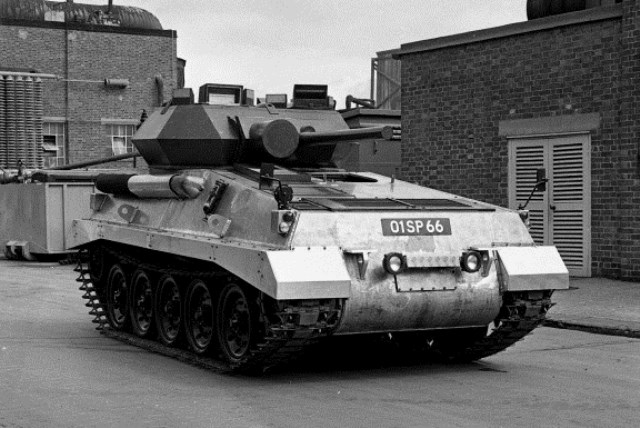 This of course is the TV-15000 prototype, but the concepts look somewhat similiar. The AVR proposal we are talking about was equipped with either a 30mm cannon or a 76mm cannon firing HESH shells (quite nasty, -10/+30 elevation). The armor is very thin (designed to protect the crew from shrapnels from 105mm HE explosions, small arms and machinegun fire), but it was very light (6,49 tons) and equipped with a relatively powerful engine (200 horsepower, giving it 30,81 hp/t – 220hp apparently also available). The average speed was 60 km/h. Overall, the vehicle could be a very nasty bugger – sure, every HE that hits it annihilates it, but with so much horsepower – who needs to be hit?

FV301 was a project for a British light tank from the late 40′s/early 50′s. It was a part of the FV300 series of vehicles, that included all sorts of stuff, for example a self-propelled artillery piece. A prototype was built eventually, but very few photos are available. It looked something like this: 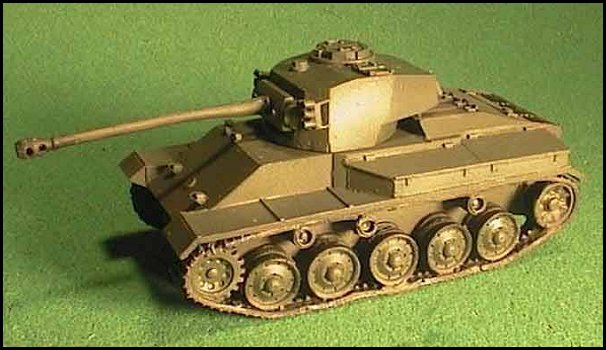 At least one prototype was built, but it disappeared at some point. In any case, the vehicle was not accepted into service. Luckily for us, Ogopogo from US forums managed to uncover drawings and specifications for this vehicle (the drawings generally match the picture above). Again, I am not at liberty to post them here, but I can write that the vehicle had a crew of 4, weighed 26 short tons (23,5 tons) and was powered by Rolls Royce Meteorite Mk.II (or Mk.VI), producing 537 hp (20,65 hp/t), maximum speed was 48 km/h. Frontal hull armor was 31,75mm (55 deg) and 44,5mm (54 deg) thick, sides were 19mm thick, rear was also 19mm. Turret thickness was 51/25,4/25,4mm. The armament consisted of 77mm QF gun, that could penetrate 120mm of armor at 30 degrees at 500m. Overall, it looks like a pretty solid light tank, nothing too wild.

Tier 6 is where conventional British light tanks end and real fun begins. The problem is, I would love to tell you, but I can’t. Tier 7 and up are based on info, that was directly uncovered by the gentlemen listed above from archives and none of it is available for public yet (not my call).

The very short version is that tier 7 could be a version of the FV4401 “Contentious” – no, not the one on wiki. To give you an idea, it kinda looks like ELC (very roughly – it’s taller, but it has rear turret), it has an autoloaded 17 pdr. There were several Contentious projects, some of them are very, very bizarre. This particular one seems to have reached the mockup stage. A better photo exists, but this is the only one already published I found (nope, that’s not just a random piece of junk made to resemble a tank): 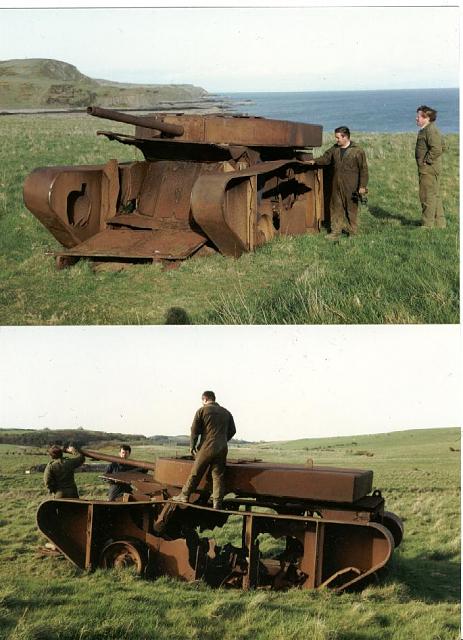 Tier 8 to 10 would be Vickers tanks. Specifically, tier 8 would be a light tank, tier 9 and 10 would be Vickers medium tanks, with 9 a Vickers MBT prototype and tier 10 a Vickers MBT, which was already described elsewhere. The prototypes is what we call VTN’s. VTN means “Vickers Telephone Number” (an inside joke, not an official name) – the prototypes are called Vickers 45569, 46200 and 51025. They represent the stages of the Vickers MBT development, with the earliest, 45569, a candidate for tier 8 light tank. It was basically a lighter version of the MBT, with a 20 pdr gun. I wish I could publish more about them, but again, same as above.

It however IS possible to build a line like that. Whether it will happen, well… that’s another matter. The line would be amongst the heavier ones when it comes to light tank lines, the tier 8 having relatively worse mobility, but good firepower for a light tank.