a mouse is usually a small animal being hunted instead of doing the hunting… but – what if we gave it the teeth of the crocodile?

Why is it needed? Where would it go?

Let’s start from the beginning. There are basically two reasons why a new German tank destroyer would be needed.

Some time ago, the Waffenträger E-100 line was implemented. After some time, it was found out that the Waffenträger E-100 is far from ideal. While fragile, it was also overpowered and with its phenomenal firepower, it was able to chew through practically any tier 10 vehicle within a single autoloader cycle. That of course was not exactly an ideal situation and in 9.2, WT E-100 was nerfed, but it still remains one of the most feared predators on the battlefield.

Apart from being overpowered, it has another issue – it’s completely unhistorical – in other words, a Wargaming-made fake. There have been some hints as to the willingness of Wargaming to replace something else, IF a suitable candidate is found. So far, it was not.

As you probably know, there have been tons of historical Waffenträger designs in the past. Most are based (such as the ingame RhB) on the Panzer 38t or 38d suspension, while others are based on either the Panzer IV (also in the game) or the Panther. Generally speaking, these Waffenträgers could be built into a line, ranging from lower tiers, with tiers 7 and 8 covered by 38t/d based WT’s and tier 9 by a Panther Waffenträger. These vehicles are all historical and I covered them in several previous articles. The problem with such a line is, there is no tier 10 for it. Even the best Panther Waffenträgers (carrying no better weapons than the ingame Panzer IV WT) would fulfill the tier 9 slot unfortunately, without some serious unhistorical buffing at least – and even IF a WT Panther was dragged to tier 10, it would have to fight with pure stealth, its chassis being very fragile compared to other tier 10 vehicles. And more “invisible sniper from bushes” vehicles is not exactly what this game needs.

The Mouse That Hunts

It was a very short-lived project (from May to July 1944, when Hitler stopped the superheavy development, facing the crisis on the eastern front). It seems that a small-scale mockup was possibly made, but no drawings or photos survived the war.

What we do know about it:

- it was to be equipped with 15cm L/63 or 17cm L/53 gun
- Porsche wanted a flak turret on the vehicle, this was declined due to the fact the vehicle would be escorted by an AA tank
- Porsche design in May 1944 was only in concept stage, it was judged too tall, “exceeding the railroad profile”
- Porsche later on wanted a 3cm flak turret on the vehicle at the expense of gun recoil
- Vehicle was to carry 85 rounds of ammunition
- a gun, considered for the E-100 competitor was also 15cm L/68, that however was a Krupp thing

What we do NOT know about it:

- how it looked, dimensions
- how thick was its armor
- the gun performance
- the engine that was to power it
etc.

As you can see, very little is known about the project, apart from the fact it existed. If it was to be – say – implemented into World of Tanks, the developers would have a lot of potential room to operate. It however must be noted that any such implementation would have to be marked specifically as “artist’s impression”, as there is no way of knowing how the real vehicle would have looked like. Still, better than WT E-100 – and this is where the real fun begins. 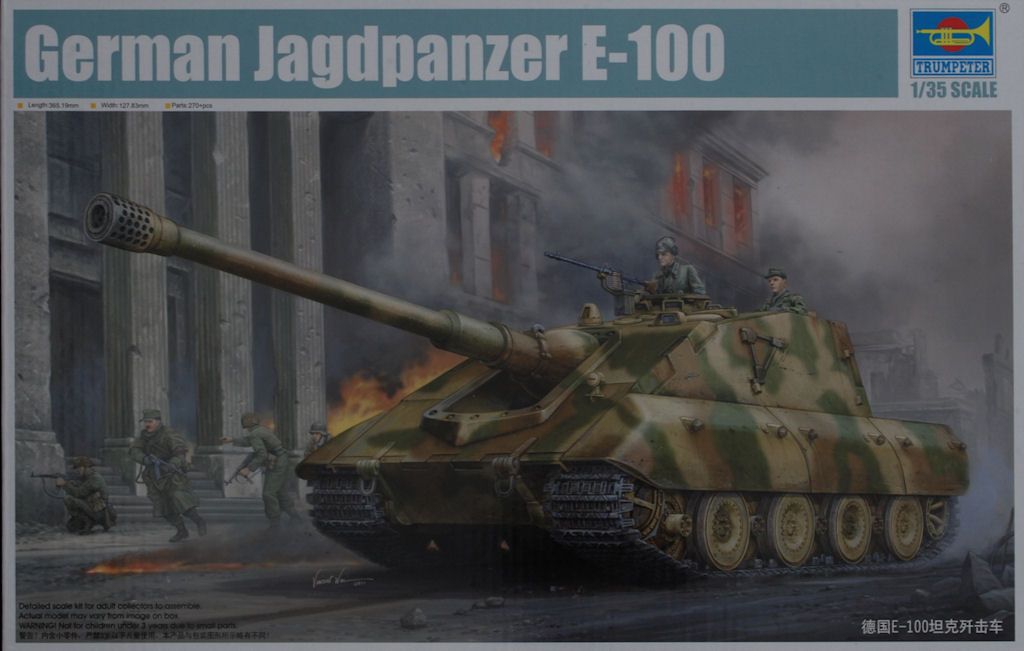 This is the Jagdpanzer E-100 “Krokodil”. It’s a notorious fake, that appears every now and then on the internet. No such vehicle was ever planned and the author of this look was not a German engineer, but a modeller, specifically the Trumpeter company. Alternative looks of the “Krokodil” exist on the internet, they are all fake. Nevertheless, at one point (a long time ago), Krokodil was actually seriously considered for implementation in World of Tanks by the developers. There are however two serious issues with the vehicle:

- it’s unhistorical: even if the Sturmgeschütz E-100 (not Jagdpanzer!) existed, it would not likely be of this setup. There are tons of issues with the frontal gun layout: the gun is long and the vehicle was of titanic weight, exceeding the capabilities of WW2 level metallurgy. Sure, ISU-152 worked with the frontal gun, but the gun was shorter and most importantly, the vehicle weighed 47 tons, not 150. The frontal part of the suspension would be overstressed, it would be difficult to maneuver etc. – there is a lot of problems with that design and that was why Wargaming decided to implement the rear-casemate version, that is more realistic. The Wargaming version of Jpz E-100 is what Krupp likely intended it to be – that, or an oversized Jagdtiger with mid-casemate.

- it’s copyrighted: yep, it’s art, so it’s protected by law. Unless WG bought the rights to this design, well… too much hassle I guess.

But… there is a way. What if Wargaming made the StuG Maus into some sort of KrokoMaus? Noone knows how it looked. The short version is: make it frontal casemate as the picture above, give it the 15cm L/63 and Maus suspension. And there you have it, the Maus with some nasty teeth.

As I mentioned it above, noone knows how the StuG Maus looked like. While it is historically unlikely that the German engineers chose the frontal casemate variant (the Maus design would require some serious overhaul in this case), it is certainly more attractive design. What I am thinking is something like this.

The goal would be to create something lighter than the Jagdpanzer E-100 in the game, but with some nasty punch of the 150mm gun.

The armor – well, nothing is known, so it’s a purely balance measure. I’d suggest something that would give it roughly the same level of protection as the Soviet tank destroyers have, so somewhere between 200-250mm effective armor with LFP weakness. Sides would be weaker, but the sideskirts could compensate for some of that. Alternatively, the armor could be significantly lighter for increased performance and gun soft stats.

The gun – 150mm L/63, its historical performance is not known, so anything goes. I would suggest something like:

The mobility – probably Maybach Neues Projekt engine, 1200hp in the game. The actual performance depends on the weight of course, but I’d put it somewhere between WT E-100 and Jpz E-100.

Naturally, the camo factor of this beast would be mediocre (we don’t need invisible TD’s).

So, what do you think?

102 thoughts on “The Mouse that Hunts”