in part 1, we had a look at the birth of the LTL tank. Now, let’s continue on with the story. When we left off, the LTL prototype was actually built on 14.4.1938 and was ready to be presented to the Lithuanian forces.

But now, it’s April 1938 and dark clouds gather over Europe. Czechoslovakia too senses this – set upon by German terrorists backed by their nazi masters, a general consensus is reached to upgrade the Czechoslovak armored forces. A new program is created, a category designated IIa, that is to include the “light cavalry tanks” (fast, lightly armored vehicles, able to keep up with cavalry forces). Both Praga and Škoda are asked to present their suitable prototypes. Praga responds with three vehicles:

At that point however, the LTL prototype was not completely ready yet and while it was theoretically mentioned as a contestant, it did not actively participate in the tests – in the end, the committee declared the TNH-S to be the winner. In the meanwhile, an evaluation committee from Lithuania (Gen.Popeliučkis, Lt.Col.Masiulis and Lt.Tumosa) arrived in Prague to witness the LTL trials, which took place in mid May, 1938. The trial results went out on 28.5.1938. Possibly the most important element of these results was that the committee rejected the fact that the LTL was too heavy. The Lithuanians demanded strictly no more than 6 tons, while the vehicle was 7,2 tons heavy. The engine was also judged as underpowered, but apart from those things, the Lithuanians were relatively satisfied by the design. They even accepted the fact that the maximum speed was to be reduced from 54 to 45 km/h, but they demanded improvements to the powerplant and the drivetrain of the vehicle. Further trials were to continue when the prototype was upgraded according to Lithuanian demands.

The refit started in June 1938. The F4H engine horsepower was upgraded and so was the Praga-Wilson transmission. The armor underwent firing trials and the foreign 20mm guns were tested as well. The prototype itself drove more than 2000 km until 10.8.1938, but the tests were plagued by breakdowns.

At that point, however, the situation of Czechoslovakia became critical and threatened by nazi Germany, the Lithuanian committee was forced to flee Prague. The testing was to continue in Lithuania, but only after all the teething problems of the design were fixed. At that point however, ČKD found itself in a deadlock, unable to have everything fixed on time. An alternative solution was proposed however: at the same time, Praga was testing and producing the LTH for Switzerland. LTH had two major advantages over the LTL. First, it was equipped with a reliable Scania-Vabis engine with sufficient horsepower, which was to be also license produced in Prague. The same engine was also later to be used in the Swedish TNH-S, in which it was tested. Secondly, there was a more reliable Praga-Wilson transmission version available for this vehicle (the drivetrain was different due to frontal drive sprocket).

To “sweeten the deal”, ČKD said openly that the price would definitely decrease, were the LTP, LTH and the Lithuanian tank to be produced at the same time, as mass production would be cheaper. As a result, the Lithuanian committee (now in Kaunas) agreed to test both tanks (LTH and LTL) side by side, even though the Lithuanians still preferred the LTL. On 26.1.1939, both tanks were sent to Lithuania and were tested there for three weeks, both prototypes driving over 1400 km each. At this point, the design reliability was already significantly improved and both prototypes sufered no major breakdowns – in fact, they both proved to be quite reliable. On 21.2.1939, the committee declared that both tanks succeeded in fulfilling the Lithuanian demands. The constant point of criticism however was the F4H engine, despite its ability to work even with full half of its cylinders knocked out. General Popeliučkis was heard saying that he does not want it, even if it ran on one cylinder, he wanted a common engine “of an automobile type”.

In the end, the committee agreed to order not the LTL, but the LTH, with some modifications. These requested modifications to LTH included:

- thinner armor in order to save weight
- different armament (the Lithuanians requested 20mm Oerlikon, while the Swiss version had 24mm Oerlikon-Solothurn M.38
- switching the driver position from right to left

The German occupation did change the ČKD plans however. Both the LTL and LTH were to be shown to the government officials of Estonia (in Tallin) and Latvia (in Riga), but these plans were cancelled and both prototypes were returned in March 1939 to Prague. That was not the end though, not even close.

It was early 1939 and the German occupants were not yet ready to fiddle with the Czechoslovak armor production. Germany did technically not mind the export of armor to the Baltic countries and so ČKD would make plans for the mass-production of these export light tanks. On 25.4.1939, the production was planned on a business meeting between Praga (engines and transmission), Poldi steelworks in Kladno (armored plates), ČKD machineworks in Prague (machine parts), Škoda Pilsen (the main gun) and Zbrojovka Brno (machineguns). The final assembly would take plance in ČKD plant in Slaný.

Given the fact that the Germans did not mess with the production, ČKD assumed the entire production run of 21 vehicles (including the manufacture of spare parts and trials) would be over by January 1940. This however was not to be – the LTH Lithuanian production was delayed by the modifications requested by the Lithuanians, specifically the engine, transmission and turret modifications. The original foreign armament was also replaced by Škoda and ZB products, which caused further delays, as both companies were busy by their own projects. 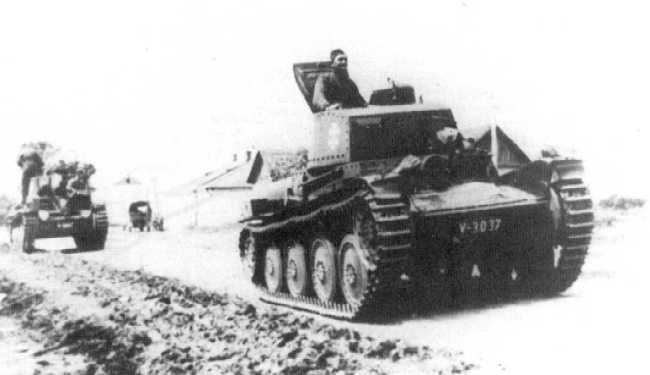 In the end, the result was basically a heavily modified LTH with 37mm Škoda gun and with the reliable Praga TNHP engine. As such, the vehicle was designated as LLT (“Lehký litevský tank” – Light Lithuanian Tank). The modifications were however so extensive, that the delays caused by them were already starting to be a major problem. The first prototype (without turret and gun!) was only ready on 15.4.1940 and the entire production run was delayed from the intended January 1940 deadline to 19.8.1940. The assembly production run in Slaný at least ran without any problems between 15.6. and 19.8., but at that point, the international situation changed a lot. The entire Czechoslovak production at that point was changed to suit the needs of the German army and went into full wartime mode. More importantly, however, Lithuania was occupied by the Soviets and its army effectively ceased to exist. As a result, the only remaining member of the Lithuanian delegation, Lt.Tumosa, was recalled back to Kaunas in August 1940 and the connection between the producer and the customer was severed completely. For now, the LLT fate was sealed. The last act was the ČKD (now renamed to BMM) letter from 12.10.1940 to the (defunct) Lithuanian Military Technical Office (Karo Technikos Tiekimo Skyrius), cancelling the order due to vis maior. The vis maior in this case was the OKW (German high command) order from 12.10.1940, forcing ČKD to cancel all previously accepted arms deals. Formally, the deal was cancelled by a telegram from the Soviet Union from 29.3.1941. And so, ČKD was left with a bunch of vehicles and noone to sell them to. But that we will talk about next time.

In order to make sense of the designation mess, here is a quick recapitulation:

Don’t worry, it will get worse.

Armament:
- first option: 20mm Solothurn (like LTL), scrapped due to the inability of Lithuania to obtain them
- second option: 37mm A4 BETA, a mockup mounted in the prototype turret
- third option: 37mm A7 (LT Vz.38 gun), mounted later on (we’ll get to that)