today, we are going to talk about a topic that I intentionally avoided for a very long time, because to say it’s a mess would be an understatement. The history and designation of Praga export tanks is very confusing and… well, you’ll see. In order to start, we have to return back to early 30′s and Praga’s TNH design.

It was a good time to be a Czechoslovak arms producers. Military production of Czechoslovakia was always of top notch quality (especially the Škoda artillery), but this all culminated between 1934-1935. In those years, Czechoslovakia was the biggest arms exporter in the world. While most of the production was sold to European countries, we exported armor to some quite exotic destinations, such as Iran and Peru.

The tanks, exported by Praga, are generally referred to as “Praga export tanks” and in this article series, we are going to have a look at them in detail. Or, rather, we will continue to be looking at them, since I actually already covered three of them in my previous articles. Those were:

The export light tanks were all based on the original TNH design, but the vehicles differed in a number of aspects. For one, they were generally smaller than the other TNH designs (specifically the TNH-S, accepted into service as LT Vz.38). They can be easily told apart from the LT Vz.38-based designs by the suspension: the roadwheels are smaller and there is an extra return roller.

The main difference of course was that the export tanks were made specifically according to the wishes of the customer. Most of the time, that included the engine and the main gun (plus the armor specifications), the suspension was always of the Praga type. Today, we’ll have a look at what Praga developed for Lithuania. 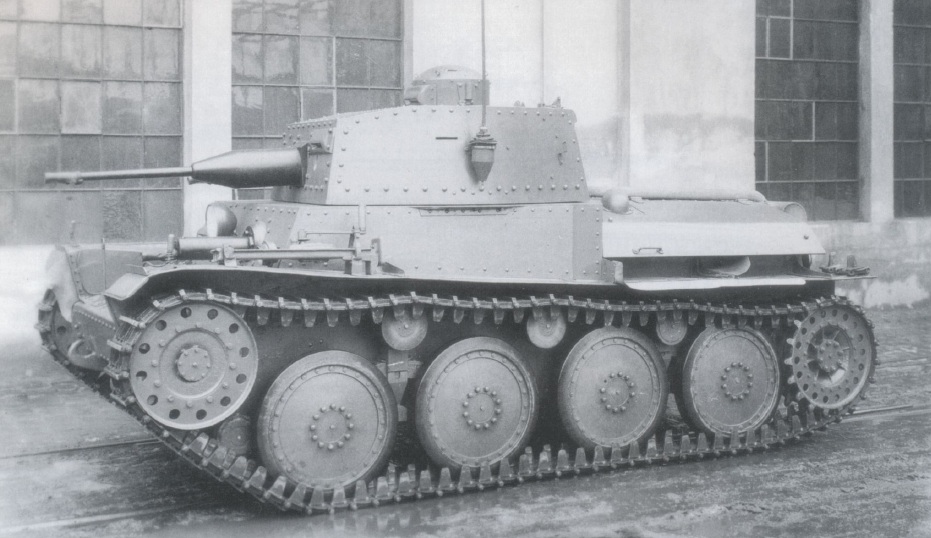 Lithuania was one of the interesting clients Praga acquired over the years. The decision to import tanks came from the desire of Lithuania to build its own strong army to defend it against the aggression of its neighbor, Russia. The 30′s however found the Lithuanian army to be woefully underequipped. Its armored forces consisted of a couple of old WW1 era armored cars, some 12 FT-17 light tanks, bought from France in 1924 (machinegun version only) and later of 16 Vickers M.1933 machinegun tanks from 1934 (as well as 6 Swedish Landsverk L-182 armored cars). These meager forces were formed into two armored companies in Radviliškis and Kaunas. By the end of the 30′s, practically all of these vehicles were completely worn out by use and in generally very poor shape (this was especially true for the vintage armored cars and the FT-17′s).

As a result of these conditions, Lithuania accepted a new, re-arming program, that presumed the purchase of 64 tanks and 20 armored cars. Lithuanian Ministry of National Defense (krašto apsaugos ministerija – KAM) thus reached out to the well-known European arms manufacturers (including ČKD) with its demands in early December 1935. These demands included a tank of 5 ton weight, with 6-13mm thick armor, armed with a 20mm Swiss Oerlikon gun (12 tanks) and Maxim heavy machinegun (4 tanks). The tank was to be able to reach the speed of 50 km/h. The deadline for manufacturer offers was set at 15.1.1936.

This demand found ČKD in an unfortunate situation, as no such design (let alone prototype) was readily available. In the end, the Praga engineers took the AH-IV tanketted, modified it to at least partially meet the requirements and sent it as an offer on 6.1.1936. It was a stopgap solution at best, but it raised the interest of the Lithuanian side. In March 1936, a Lithuanian delegation came to Prague to witness the trials of the AH-IV and TNH (Iran) tanks and to talk about conditions and prices. Unfortunately, both vehicles not only did not fulfill the Lithuanian demands, they were also too expensive for Lithuania. In the end, Lithuania settled for buying 16 more Vickers M.1936 light tanks, forming a 3rd company from them.

That however did not dissuade ČKD from pursuing this potential customer further. Furthermore, ČKD also “acquired” a piece of information, that Lithuania was to spend a large sum (15 mil.CZK) on armored vehicles between 1937 and 1940. ČKD thus asked KAM for new demands and in November 1936, they sent their chief designer, Ing. A.Surin to Kaunas to discuss the exact demands and conditions of Lithuanian military and to present them his LTL-H project. His trip was a success, he made a good impression. In November 1936, a Lithuanian committee arrived in Prague with Col.Aleksandravičius as its head to discuss the conditions once again. They were especially adamant with the light weight demand – maximum weight of 7000 kg was requested due to the state of Lithuanian roads and bridges. Surin’s LTL-H however was heavier and thus, this demand was dropped (the LTL-H was also offered to Switzerland, where it was replaced by another project, the LTH). 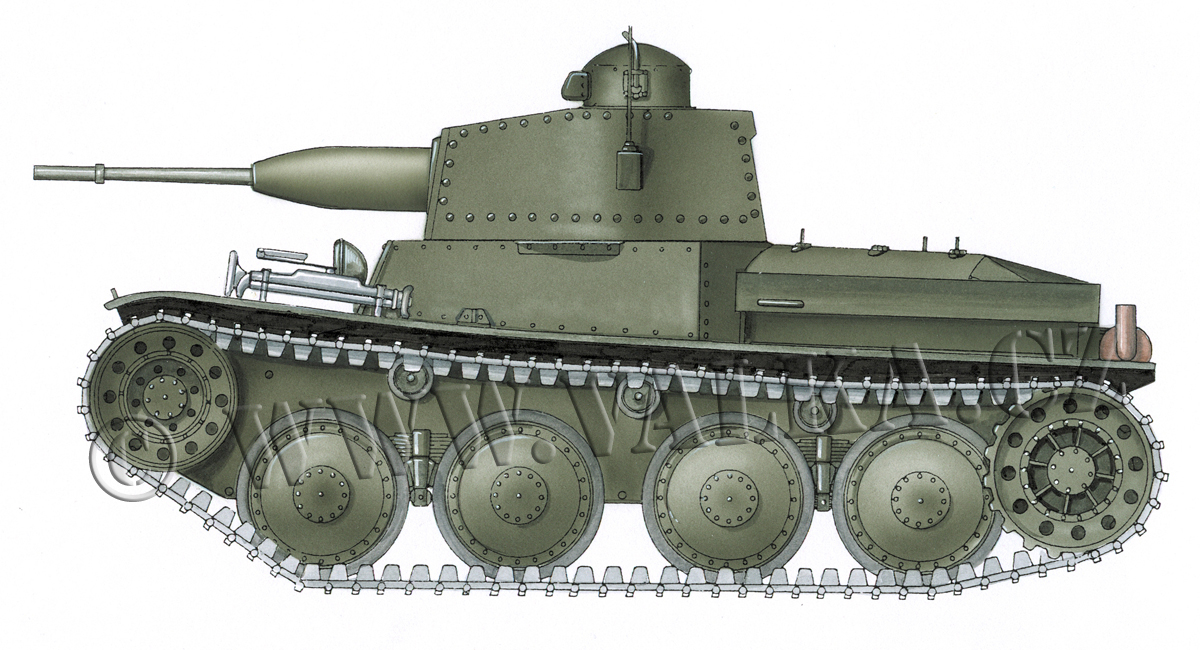 Thus, in February 1937, another project was concieved, this time designated as LTL (“lehký tank pro Litvu” – “light tank for Lithuania”), a very light tank indeed. The negotiations about this tank were quite pressing, as the competition (Landsverk Sweden, with its L-100 and L-120 tanks) was closing in, but in the end, ČKD was successful and on 26.5.1937, a contract for 21 tanks between Lithuania (represented by Col.Aleksandravičius) and ČKD was signed. ČKD was thus to produce a tank between 5 and 6 tons of weight, armed with a 20mm gun, two heavy machineguns and with 25mm of frontal armor, capable of reaching 54 km/h. The prototype was to be built until the end of November 1937 – this however presumed that the customer (Lithuania) would secure the arms they demanded (20mm Solothurn cannons). That of course was not as easy as it looked on paper and due to some delays in the production of the armament, which came 2 months late, the prototype was only ready on 14.4.1938 (the fault for the delay was also partially in the new Praga F4 engine, that proved to be unreliable due to its teething problems).

Generally, the vehicle resembled the TNH (Iran) tank, but it was smaller and there were other changes as well (notably the drive sprocket was in the rear).

Its dimensions were as such:

The vehicle weighed 7,2 tons (not fitting within the Lithuanian limits) and was powered by a 120hp Praga F4 4-cylinder water-cooled gasoline engine (power to weight: 16,67 hp/t). It could reach speeds up to 54 km/h. Its armor had the following thickness:

Overall, it was a pretty solid tank, but unfortunately, storms were gathering over Czechoslovakia at that point and big changes were coming for the Czechoslovak army as well and the final fate of this design will be revealed in the next part.

I have the LTL as one of the “export” options in the Czechoslovak light tank branch on tier 3. Sure, for that tier it’s undergunned (stock gun option), but we’ll get to the good stuff later on.