today, we are going to talk about what happened to the 21 LLT tanks, produced for Lithuania, but never delivered. If you are interested in that story, please get back to part 2 of the series. 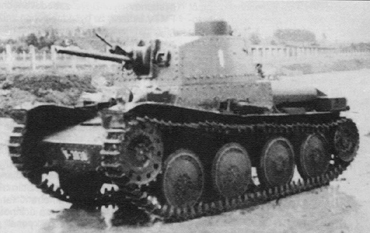 In Summer 1940, Czech arms production was already firmly in the German grasp and the manufacture process was changed to suit only the German wartime needs. As a result, ČKD (now renamed to BMM) was forced to cancel all previous export deals and that included the Lithunian one. After all, Lithuania, being fully occupied by Hitler’s allies, the Soviets, was in no shape to order and pay for those vehicles anyway. All the future export deals required German export permissions in any case. And so, the produced vehicles were just standing in the ČKD factory at Slaný, waiting for their final fate.

Even though many export markets were now closed to Czech products due to the nazi occupation, there was still the option to sell arms to one of Hitler’s allies. This was actually the way the Germans preferred it, keeping their own vehicles to themselves and having their allies outfitted either with obsolete, second-hand or foreign (Czech) armor. One of those allies was of course the fascist Slovakia. Having torn away from the old Czechoslovakia, Slovakia openly declared its support to nazi Germany and even though they were regarded by Germans with some suspicion (as were other allies), their market was one of those allowed for export.

In early 1940, after some army consolidation, Slovakia decided to upgrade their aging armor (inherited practically completely from the old Czechoslovak army) to something more modern than the LT Vz.34 or Vz.35. Ever the agile businessmen, ČKD founded a branch in Slovakia (the company called “Orava”) and offered on 6.7.1940 to sell them all the 21 LLT vehicles, produced originally for Lithuania. At the same time, Slovakia was interested in purchasing a modified LT Vz.38 variant, designated TNH-Sl (Sl as “Slovensko”, Slovakia). The Slovaks immediately jumped at the opportunity and asked the Germans via their embassy in Bratislava for the permission to import the 21 LLT tanks from the Protektorat. A committee was sent to Prague immediately under the command of Major Štefan Čáni, commadner of the Armored Regiment (PUV) from Sv.Martin.

Between 3.8. and 6.8., the committee witnessed comparative trials of the LLT and LT Vz.38 (now designated LT-38). Both vehicles showed themselves in great light. Passing all tests without any problems, the committee was forced to conclude that apart from being both excellent designs, they were however also pretty identical. The LLT proved however to be somewhat more maneuverable than even the otherwise truly awesome LT-38. The committee thus immediately recommended the purchase of all the LLT tanks and to bring them to service immediately. There was one catch however – the committee also recommended to unify the main gun of the LT-38 and the LLT, basically upgrading the LLT tanks from (intended) 20mm Solothurn to 37mm A7 (the same went for the machineguns, that were to be upgraded to ZB Vz.37). Before even recieving the official ČKD offer, the Slovaks petitioned Germany again for 21 37mm guns, 10,5k AP shells and 10,5k HE shells, license-produced in Slovakia in Dubnica nad Váhom.

The final ČKD offer arrived on 19.8.1940 and on 26.8.1940, Slovak Ministry of Defense officially ordered all the LLT tanks from ČKD, minus the guns, optics and radios, with their turrets modified to easily fit the 37mm Škoda A7 gun (the original weapons of LT Vz.38). The final assembly (gun and radio fitting) was to take place straight in the army repair shops, attached to the Slovak units. Everything was pretty much set and agreed upon and the Slovaks were to formally recieve the tanks in Slaný, but at this point, the German High Command (OKW) interfered, refusing to allow the trade. As a results, the Slovaks were forced to actually cancel the deal on 7.9.1940 and to order the LT-38 tanks instead (those were permitted).

Between September and October, some negotiations took place and the order for LLT’s was renewed on 13.10.1940, this time with German blessing. The vehicles were redesignated from LLT to LTS (“lehký tank pro Slovensko” – light tank for Slovakia), there was however an alternative designation: LTS-40. These tanks were finally oficially transferred to the Slovak committee (under Mjr.Čáni) on 4.11.1940. In November, these tanks underwent driving trials (still without their guns, the weight was simulated by iron ingots) and after they were transferred to Sv.Martin, they were redesignated again to LT Vz.40 (or sometimes LTS Vz.40). They were still without their weaponry and 15 of them were used for training. In the meanwhile, Slovak MoD was ordering the guns from Škoda, machineguns from ZB, optics from Optikotechna and radios from Telefunken.

Even so, the vehicle was pretty good for its time, just like its “bigger brother”, the LT-38 (or, at that point, Panzer 38t).

The tank was to see action soon in Slovak service – but that we will talk about in the following (and last) part.