In this part, we’ll take a look at how could the Hungarian Tas medium tank be implemented into WoT. Everything is the same as in the previous articles: I will try not to predict game parameters (health points or alpha damage) and the balance parameters (radiorange, RoF, etc.) would not necessarely be implemented as I listed them below.

Please note that these are only the historical characteristics, the would be implemented tanks could get unhistorical stuff as a last resort, if the game balance requires it.

Unfortunately, Hungary did not produce a tank, which would perfectly fit in the in-game tier 6 slot. Therefore, to avoid implementing non-domestical or unhistorically overbuffed tanks into the Hungarian tech tree, I separated the Tas medium tank into two. In my opinion, this is the least bad solution. Let me show you my idea:

These tanks, the separation of the historical 44M. Tas medium tank into two different vehicles, are technically made up by me. There were no separate “prototype” Tas tanks in practice, because the first two 44M. Tas tanks, that were manufactured in the WM factory – before they were destroyed, along with the whole WM assembly hall – were the prototypes. So the 44M. Tas and the Tas prototype should be the same tank on paper.

However, as the 44M. Tas tanks unfortunately was never completed and it had a relatively large variety of planned and considered modules, the in-game separation is absolutely possible and more or less historical. The Tas has enough modules for to be a tier 6 and a tier 7 medium tank too.

The tier 6 “Tas prototype” would represent the Tas, that was assembled in the WM factory, therefore it would get the modules (like engine, gun, armor, etc.) that were available and/or possible to manufacture in the perspective of the late war limited resources and difficult circumstances.

Consequently, the tier 7 “44M. Tas” would represent the tank, that the Tas could have become, if everything would have been ideal, and went the way its creators wanted/dreamed. Therefore, it would get the modules, which were planned or considered at some point during the development (such as the 80mm tank gun or the 700hp engine), but were abandoned, as the late war situation got worse and worse, replaced by cheaper or less powerful modules, which were at least available at the time.

In the matter of front armor, the sources are not unified. Some of them state that the middle front plates of the Tas were 100mm thick, others (sometimes in the same book or even on the same page by the same author) state that it was 120mm thick. As the original blueprints are mostly missing, it’s unfortunately really hard to check, which value is the correct and which is not. In my personal opinion, both values are correct, but they shows us the thickness of that plate at two different stages of development. Therefore, both values are acceptable and I used the 100mm thickness on the tier 6 vehicle, and the thicker, 120mm plate on the tier 7 one. 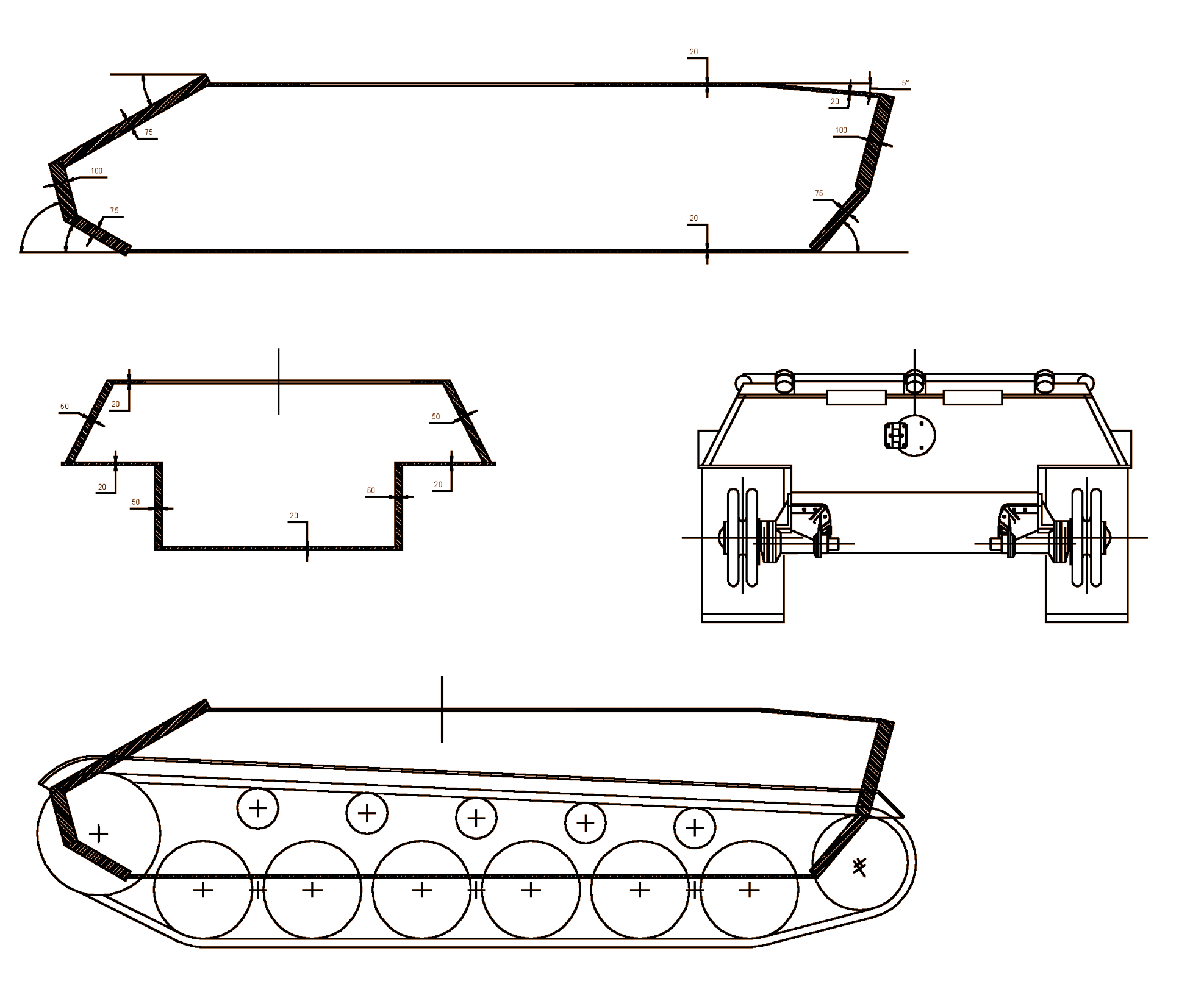 Above: Armor scheme of the Tas 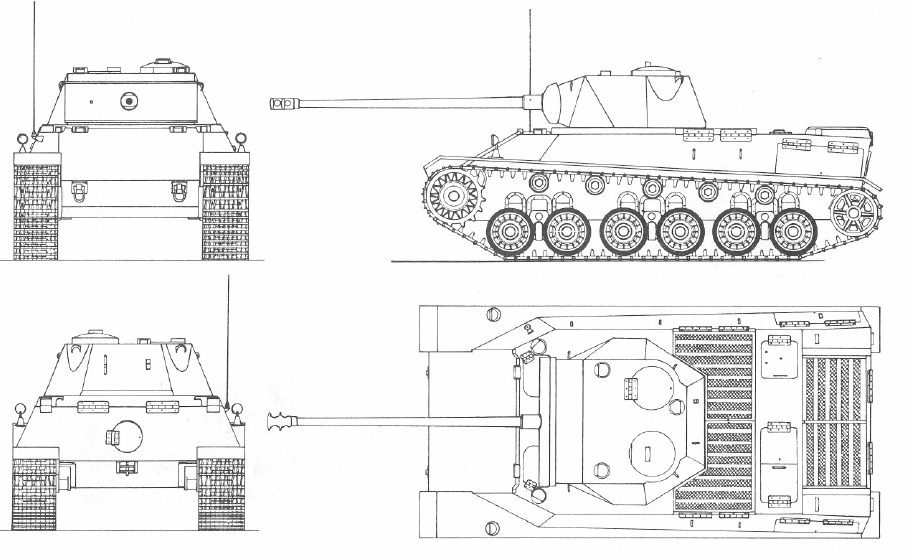 Possible vehicle description
The developoment of this medium/heavy tank started in the Spring of 1943 as an answer to the appearance of the Soviet T-34. The assembly of the first two prototypes was already started in May 1944, but on 27th of June, the Weiss Manfréd factory was seriously hit by an Allied bombing run and the two prototypes were destroyed along with the assembly hall. Shortly after that, the whole development was cancelled.

Because the desired 80mm DIMÁVAG gun was not ready in time, the creators of the Tas later decided to use the 75mm 43 M. L/43 tank gun of the Turán III medium tank and Zrínyi I assault gun for the Tas prototypes instead. However, there were some negotiations with Germany to buy the licence of the KwK 42 L/70 or import already manufactured cannons for the potentially produced Tas. Of course, nothing came out of these negotiations in the end for various reasons, such as at that time, Germany was unable to produce enough guns to satisfy its own needs, let alone producing even more for export.

Allegedly, there was a suggestion to put captured/domestically built V-2 engines of the Soviet T-34 medium tank into the Tas. As you can imagine, this suggestion was rejected early on.

Please note that some recent studies indicate that the Tas medium/heavy tank was somewhat smaller than the historians thought so far until a few years ago. Here is an illustration, the smaller one represents the real dimensions of the Tas compared to the older, obsolete dimensions. 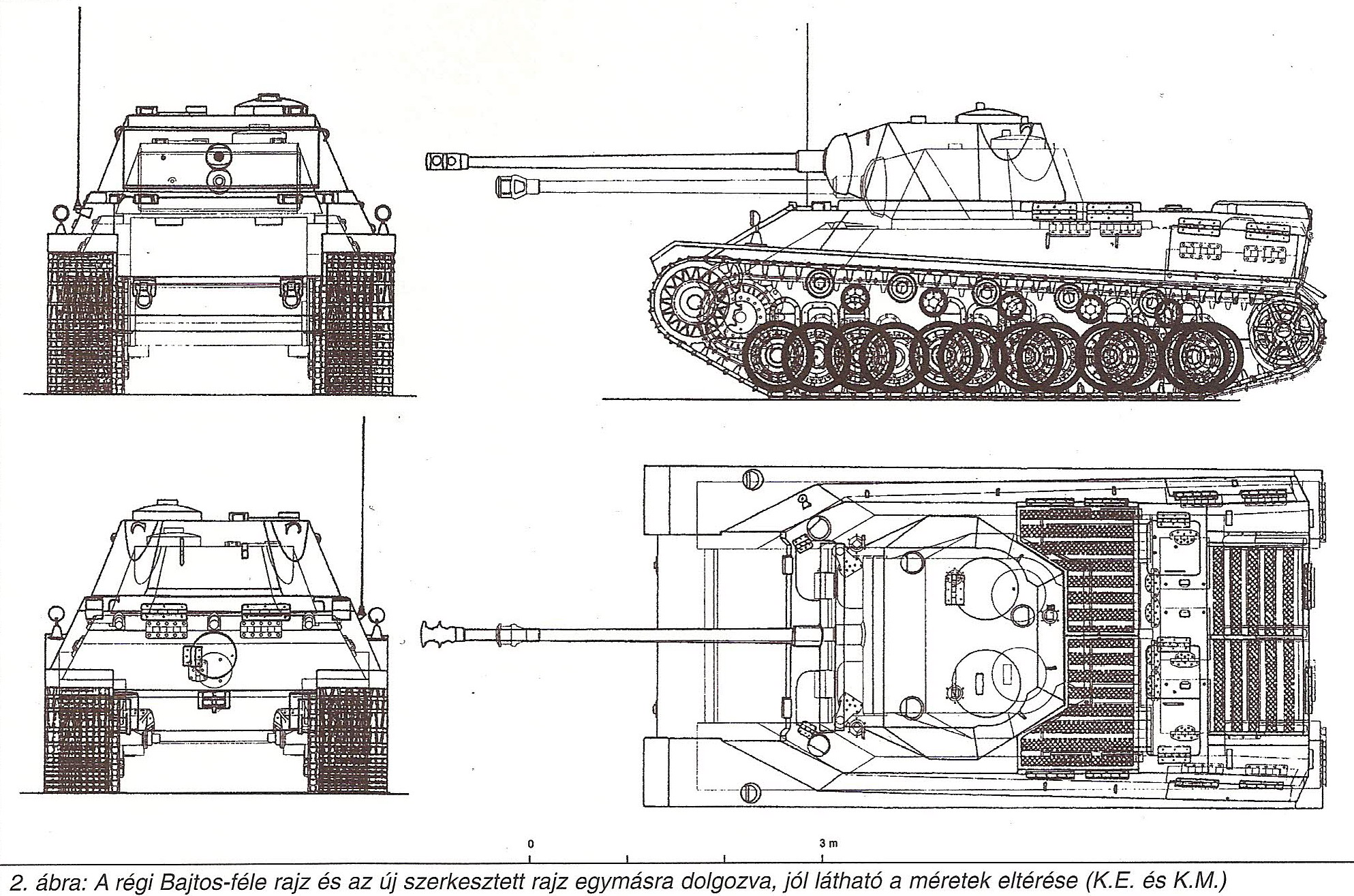 This means for example that the Tas was only 2,7 m tall, 0,2 m lower than the Pz. V Panther. Therefore, pictures like this old comperation to the Panther Ausf. D are obsolete. Do not use them anymore. 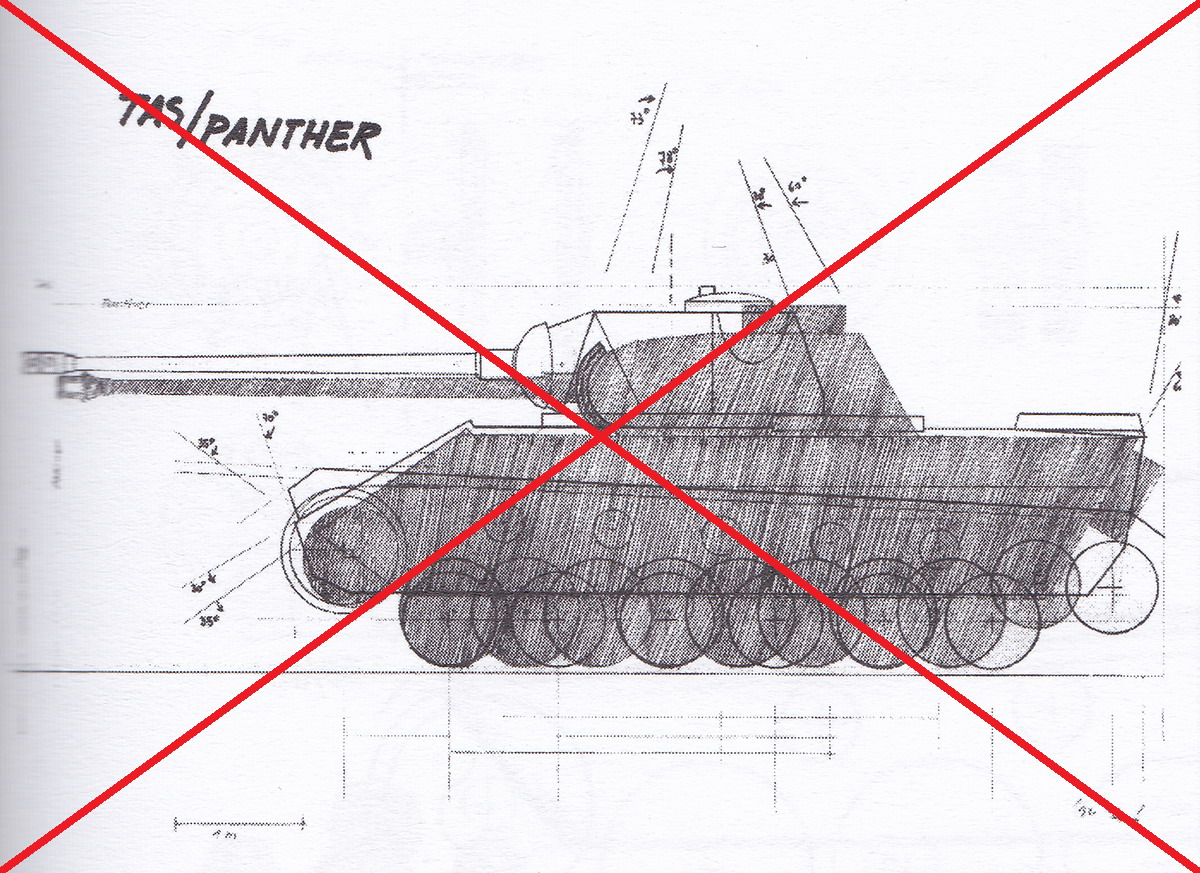 Cons:
- Mediocre power-to-weight ratio and mobility
- Probably not too good at side-scraping, because of the AMX 50 100-like cheeks
- Easily penetrable middle front plate armor
- Frontal transmission

Possible vehicle description:
The final, mass-produced version of the Tas. Its development was never completed because of the destruction of the prototypes and WM assembly hall in July 1944 and the late war lack of raw materials and production capacity. Only existed on blueprints.

History:
See more on the History paragraph of the tier 6 Tas prototype 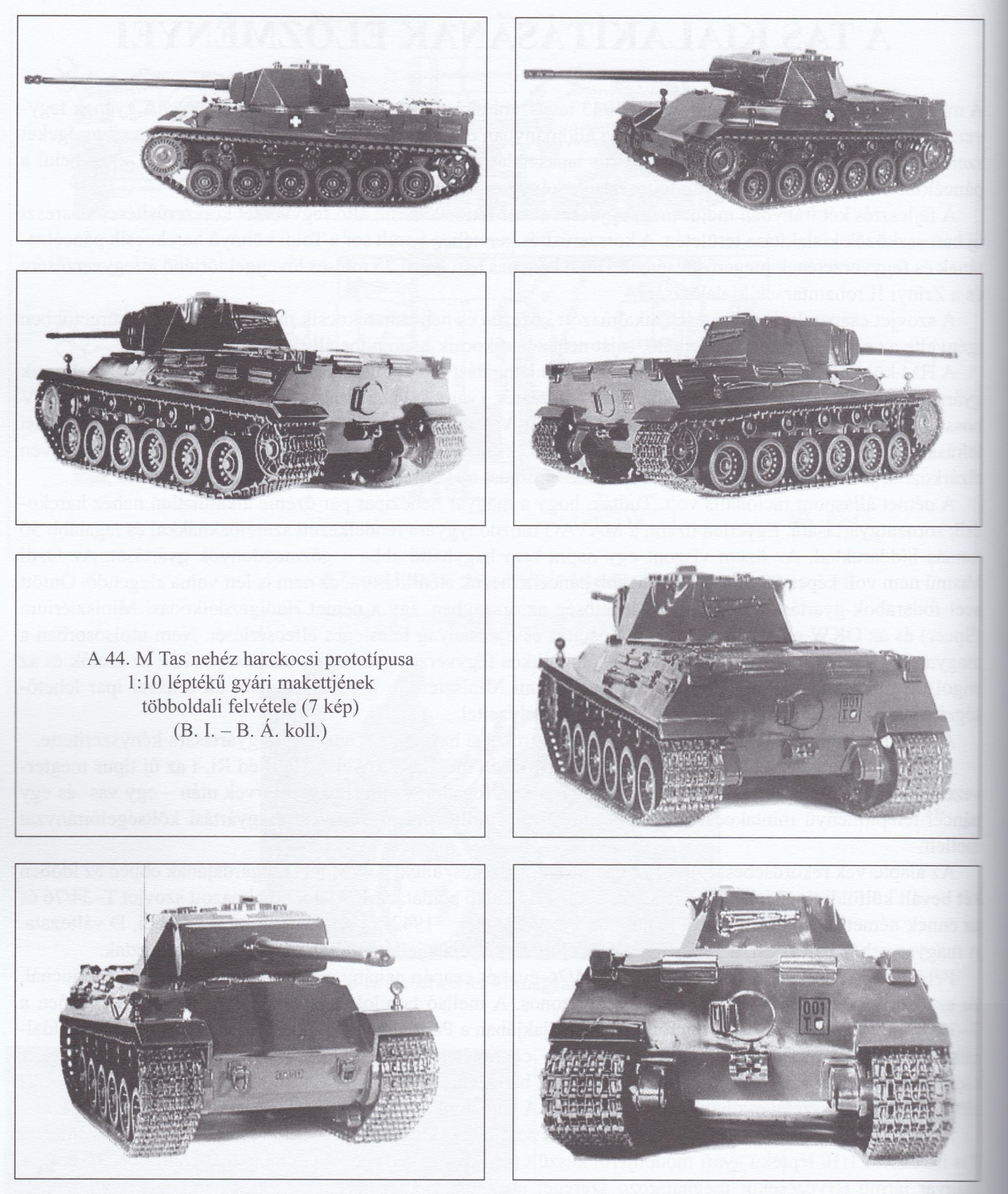 After the factory mock-up (seen above) was finished and presented sometime in late 1943, in early 1944, the turret was probably redesigned again, because later description mentions doors on the rear (or on the side? not clear) of the turret, but there aren’t any doors on this mid-development mock-up. Therefore, an alternative “late” turret is possible for the Tas with the described doors. Unfortunately, it’s not described in detail what else were changed on the turret at that redesign. Also, the exact thickness of the gun mantlet is unknown, so this could be altered too, if needed.

According to the legacy of one of the main designers of the Tas, there was an early suggestion to design a high performance (700 horse power at least) domestic V-12 tank engine for the Tas. However, this plan was scrapped in the early stage of its development, because the WM factory did not have enough time to develop or resources to mass produce it on time. So, the designers later used two, linked Turán engines instead.

According to some sources, there were some negotiations with Germany, to buy the license of the Maybach engine of the Pz. Kpfw. V Panther or import already manufactured engines for the potentially mass-produced Tas. Nothing came out of these negotiations in the end.

The original requirements for the Tas medium/heavy tank was to be able to mount an upgraded, higher performance version of the 80mm 29 M. L/48 anti-air gun, the 80mm 29/44 M. L/58 (sometimes referred as L/60 too) anti-air/anti-tank gun, that was developed at that time. The factory mock-up – shown above – was built with that 80mm gun in 1:10 scale. However, the developer, the DIMÁVAG company was unable to finish this gun within given deadline, so the developers of the Tas were forced to redesign the tank to be able to mount the 75mm 43 M. tank gun instead.

The first bunch of Hungarian tank destroyers will be described in the next part.