I am sure all of you noticed the removal of the E-25 from the shop. Of course, that leaves a gap in the tree of sorts – what of the players, who want to buy a lightweight but rapid fire tank destroyers? Well, fear not, for there are candidates, that could potentially replace the E-25 as the light tank destroyers. Enter the world of the “mad genius” of WW2, Dr.Ferdinand Porsche and his light tank/TD series. Let’s have a look at them in an article by Zarax: 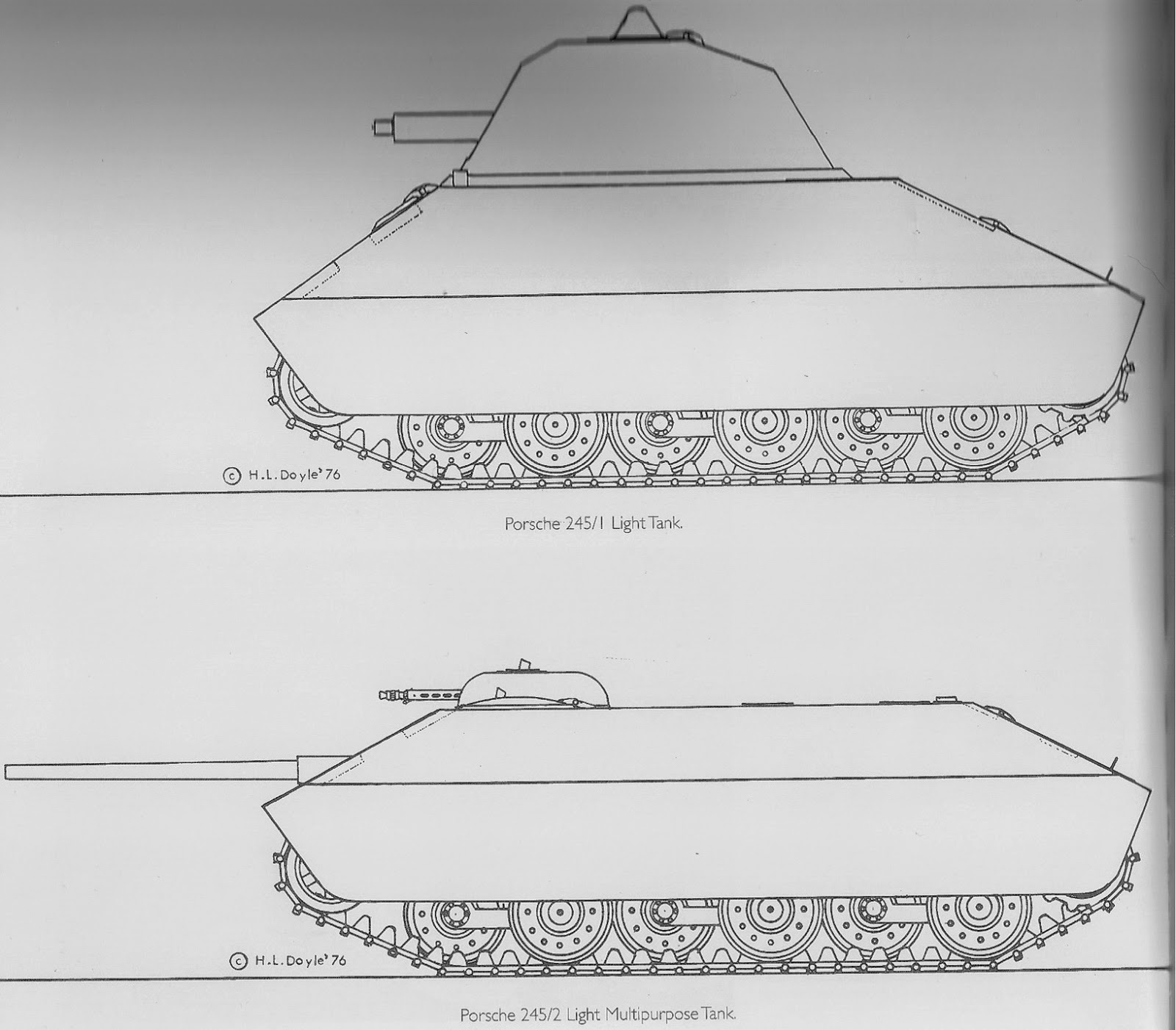 As World War II progressed, resources dwindled and the coming of Speer marked the end of serious support for super-heavy and technically complex designs, Ferdinand Porsche found the need for a radical change of design philosophy.

His advanced petro-electric powered designs were found too demanding in resources and maintenance, with the Porsche Tiger chassis becoming the simplified Elefant and the Maus, his masterpiece, reduced to a production of a few prototypes, constantly tweaked but with no future.

Thus, with a renewed interest in lighter designs, Porsche developed a new concept of tank capable of engaging both air and ground targets using self loading weapons, using as little crew as possible. The preliminary work for the “Special Vehicle V” family began in May 1943 under own initiative, starting with the Porsche “Typ 245/I”, a 18 ton light tank design.

Armed with a 55mm Mk112 belt-fed cannon and a coaxial machine gun, the tank could engage both light vehicles and low flying planes thanks to the turret elevation of 90° and the use of thin walled high explosive shells for maximum fragmentation effect.

The tank was to be powered by a Typ 101 316 HP engine that could reach 345 HP by forced induction and was placed on the rear of the tank giving a top speed of 65 KM/H.

Crewed by 3 people and well protected by a 60mm sloped frontal plate, it was planned to use a smaller version of the truncated cone spring suspension used in the Maus.

An assault gun version of this tank was planned with the Typ 245/2 design, this time armed with a longer 55mm cannon (likely the Mk114) and a machine gun in the turret. The vehicle was quite low, with an overall height of 1450mm and the crew was reduced to two. The vehicle was also slightly lighter at 15 tons and this time powered by the smaller transverse mounted Maybach HL116 engine, for a planned top speed of 58 km/h.

In 1944, as the war went on and the need of more effective assault guns ensued, Porsche created a new design family, the 27,1 ton “Special Vehicle VI”. Planning for the use of both hydraulic (Typ 250) and mechanical (Typ 255) transmission, the vehicle was designed for housing larger weapons, a bigger crew and heavier armor. The primary armament was a semi-automatic 10.5cm howitzer mounted centrally in the casemate with an ammunition load of 50 rounds, while a small turret housed a 30mm MK 108 cannon designed to engage air borne targets again with a maximum turret elevation of 90°. The driver sat at the left front of the vehicle, the commander in the turret, while the loader and gunner were on the right.

Early drafts lacked the AA turret and were more akin to Typ 245 in shape and size, while also using a torsion bar suspension rather than truncated cone spring, although all featured cast armor for faster production. The engine was again mounted transversally on the rear, this time a 18L 500HP V10 engine, propelling the vehicle to a top speed of 57 KM/H. Frontal armor was angled at 58°, set first at 80 then 120mm thickness, while sides were 45mm thick except for the turret ones, at 80mm.

To maximize protection, the main gun had a large mantlet, although size limitations meant that maximum elevation was 2°, while traverse was 14° on each side and depression -7°. Several armament upgrades were envisioned, both in the form of a new gun (the 10H64 or a recoilless cannon) and in the form of a belt feeding system to increase the rate of fire.

Well, there you have it. As you can see, Ferdinand Porsche did not limit himself to superheavy monsters, he had a knack for lighter stuff too. Of course, these speedy vehicles did not make him famous, that only came later, after the war…