another interesting article by Yuri Pasholok came out recently, this time about the development of the Renault R35 light tank. It’s… very long, so I might split it into two parts. I’ll see. So sit back, get some omelette du fromage and let’s begin :)

The French light tank development after WW1 consisted of a number of improvements to the original Renault FT. After a long line of experiments (one of the results of which was the Renault NC light tank), the French Infantry Command decided to develop a tank in the 12 ton category. This program culminated with the development of the 14 ton Renault D1, which was – size- and weight-wise – more like a medium tank.The D1 was plagued by a number of technical issues and was never a serious Renault FT replacement – 160 were made, which was only a drop in the sea of 3500 Renault FTs. The Infantry Command had to find another solution and the result was the R35 by Renault, a light tank that played a sad role in the French defeats of 1940.

One of the most important reasons for further development of French tanks were the new discoveries and improvements to the armor-making technology. At that time, the armor plates were attached to each other usually by riveting. As far as bullet protection went, riveted armor was quite fine, but making it more resistant in order to withstand more serious hits was complicated. The first nation to partially utilize welding in armor assembly were the Germans in the 1920s, but since their tank program was still a secret by then, no-one actually knew about it.

Another alternative approach to armor creation was casting. Even the first Renault FT’s had cast hull parts and turrets, but for a number of reasons this technology did not immediately become widespread. The French returned to it only in the early 1930s and even then it was limited to turrets. Using cast hull parts was actually a promising technology with the perspective of simplifying hull production – and cast hull parts were much sturdier than equal parts assembled by riveting. The first people who proposed to en masse introduce casting to tank production were the engineers from the Hotchkiss company from St.Denis (today, this town north of Paris is in fact one of the Parisian suburbs).

Hotchkiss was a massive arms manufacturer at that time, introducing its first combat vehicle as early as in 1909 – but that was an armored car, Hotchkiss wasn’t initially interested in tank manufacturing. Nevertheless, the casting procedure technology, as proposed by the Hotchkiss engineers, caught the eye of the Infantry Command, since the technology was more suitable than anything else for 30mm armor or thicker. In addition to the technology itself, the Hotchkiss company also proposed to make a tank that the French infantry sorely lacked. 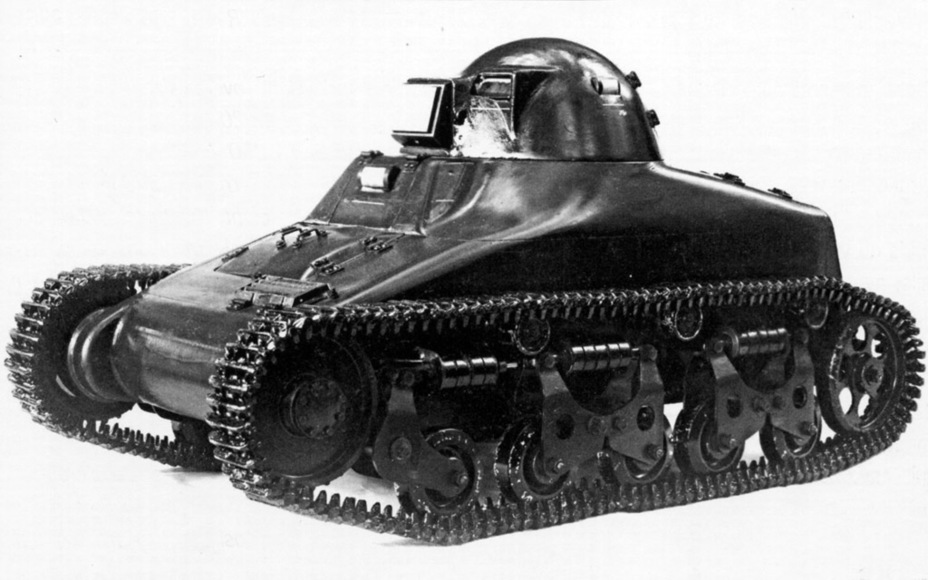 Renault ZM mock-up (pay attention to the turret, that pattern was only used on the mock-up)

The Hotchkiss project was great and all that, but the French Army wasn’t as reckless as to award such a project to a company that had never built tanks before. Instead, they formulated the demands for the new light infantry tank and issued them on 2.8.1933. This future tank was specifically intended to replace the hopelessly obsolete Renault FT and largely overlapped with the requirements issued for the Renault D1. These included:

Basically what the military ordered was in effect to be a better protected Renault FT, capable of withstanding heavy machinegun fire. 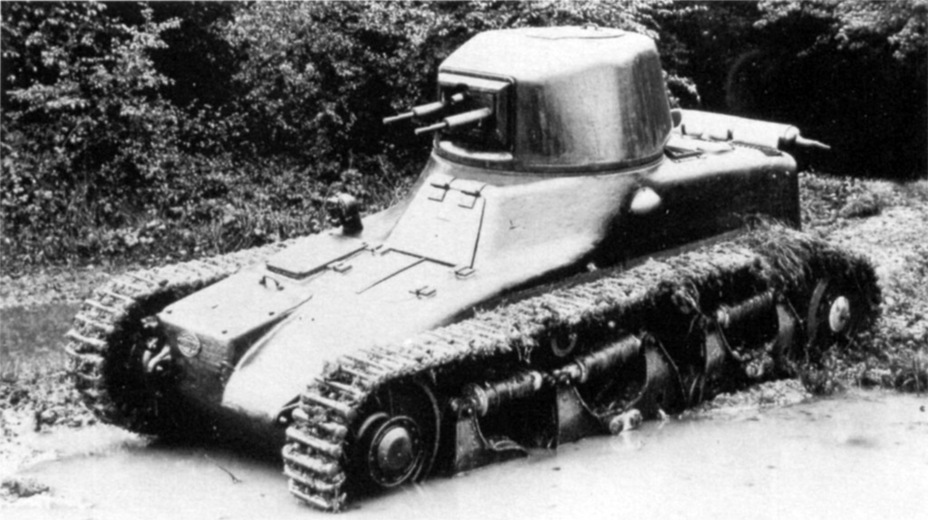 Renault ZM prototype during trials, the end of 1934

This was not an accident of course – the infantry tactics haven’t practically changed since the First World War until the 1930s. The successes of Renault FT from 1918 created an illusion that using light infantry tanks en masse was the most effective way of tank use. This logic implied that the more tanks were produced, the better – but at the same time the wartime military budgets were cut drastically. Under these circumstances, large numbers of tiny cheap 2-man crew infantry tanks with relatively thick armor looked really attractive to the army. The fact that the rest of the world at that point started preferring speed and started considering tanks to be a separate military branch instead of just the means to support the infantry was something the French tacticians either completely missed, or wilfully ignored.

14 companies in total reacted to the specifications from 2.8.1933, Renault being one of the first ones. At that time, Renault was the workhorse of the French tank industry and worked on a number of projects in parallel. One of them was the Renault VM tankette, built for cavalry used and later accepted in service under the designation of AMR-33. At the same time, Renault worked on yet another cavalry vehicle – Renault VO (the second project to bear the same name). These prototypes tested the new Renault concept of a light vehicle with transmission located in the front of the vehicle, which became the foundation for Renault’s new infantry tank. By the way, this concept was “borrowed” from the British – Renault VM was based on the Renault UE tractor, which in turn was based on the famous British Carden-Loyd tankette. 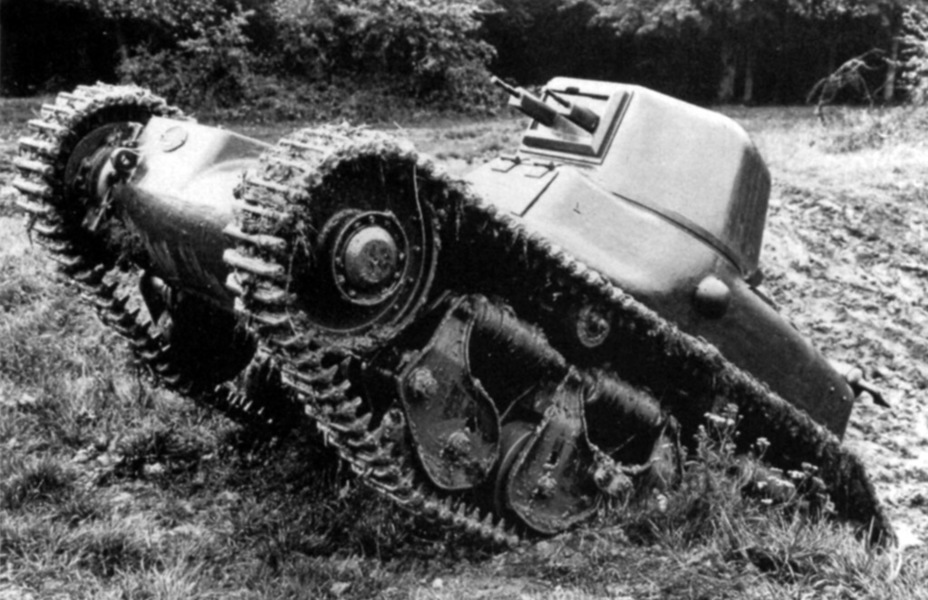 The vehicle had good terrain passability despite the weight increase from 6 to 7.5 tons

This new light infantry tank by Renault received the Renault ZM designation in 1934 when the development begun. The designers didn’t opt for any novel solutions and reworked the older Renault VM concept instead. The tank received a hull consisting mostly of cast parts and initially it was quite like a bloated cavalry tankette. The drive sprocket and transmission were located in the front of the vehicle, the combat compartment was moved a bit to the back. The driver was located in the hull, his position was shifted a bit to the left from the vehicle axis.

This approach allowed the French to make the vehicle really compact. It was for example just a bit longer than the original Renault FT. Regardless of the combat compartment shift to the back, the engine was not located (unlike in Renault VM) directly next to the crew. The gearbox and transmission shaft were located on the right side and not under the crew compartment, allowing the designers to bypass one of the biggest flaws of this concept – excessive height. The suspension was not made from scratch either, the developers used the one from Renault VO. 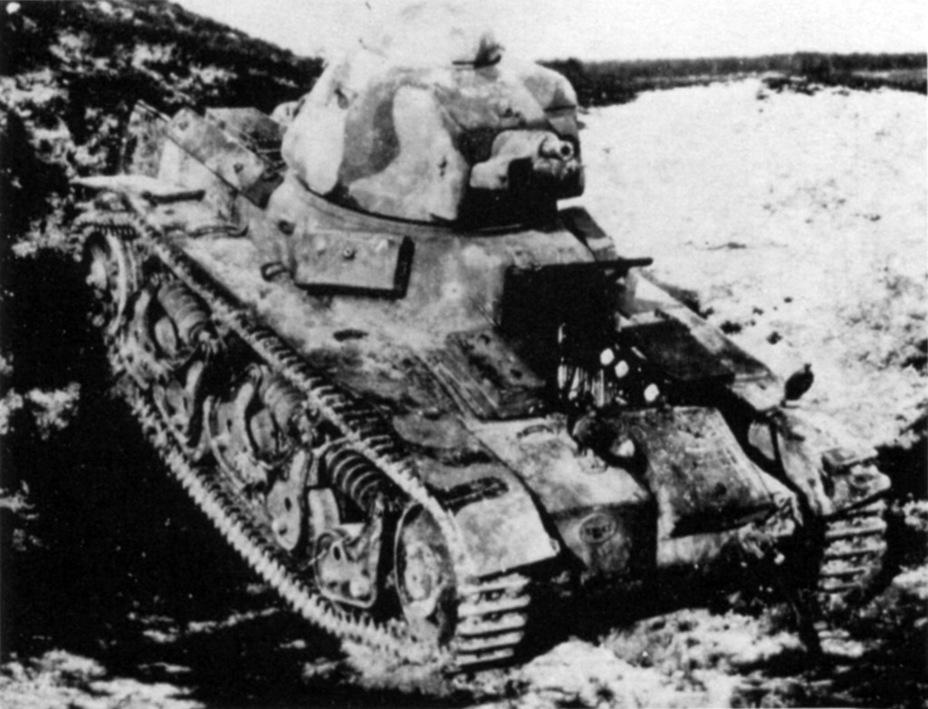 Renault ZM with APX-R turret, the Spring of 1935

The prototype was armed with a pair of machineguns. The initial turret design (the turret was designed to be armed with a gun) resembled a hemisphere, shifted to the right of the vehicle axis, but the Renault engineers concluded after running some numbers that this setup would leave too little space inside. They overhauled the turret completely, an effort which resulted in a completely different design, resembling that of the Renault VM – only it used casting. Crew hatches were located on the back and on the top of the turret. The vehicle with this new turret underwent trials in the December of 1934, surpassing all competition – it’s true though that the requirements changed by that time already a bit.

On the 22nd of May 1934, the equirement specifications were changed to an infantry support light tank. This included the following changes:

At that point, only 7 design companies were still in the “race” out of the original 14 and in reality the contracts were only signed with 4 of them:

Because Renault was already working on a prototype by the time the specs were changed, the initial Renault ZM prototype was based on the original specs. Renault did not bother to build another prototype – instead, they introduced on 20.12.1934 the reworked first prototype with 30mm armor to the appropriate military committee. Only the turret was made thicker (to 40mm), resulting in a weight increase from 6 to 7.5 tons. After the demonstration, additional changes were made to the prototype – for example, mudguards were installed and the exhaust muffler was moved from the back of the hull to the left side. 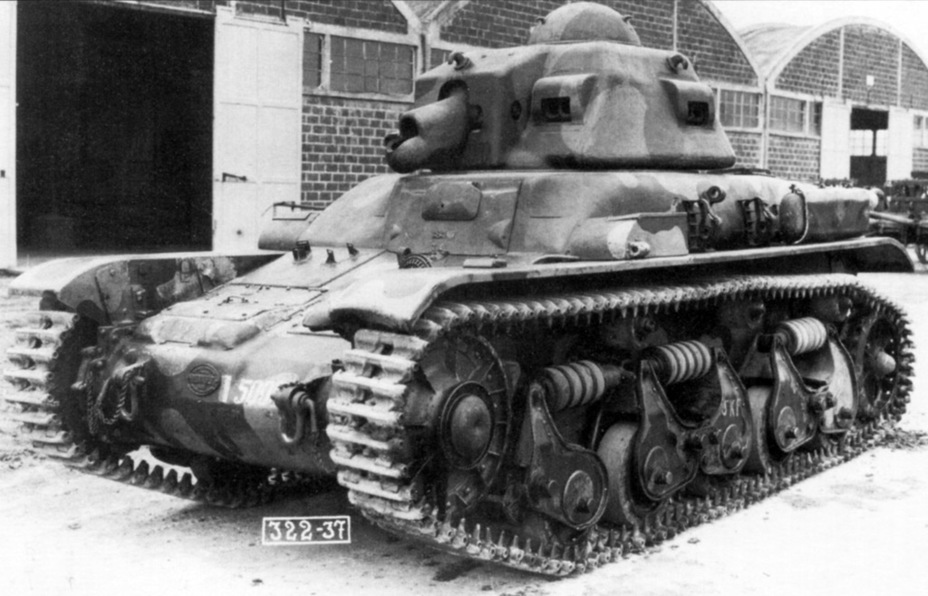 The main change however was the new turret, installed on the vehicle in early 1935. It was developed by the engineers from APX (Ateliers de Puteaux), another important arms-making company. APX initially intended to present a 6-ton prototype light tank of its own, but failed to secure the funding for building of a prototype. This did not prevent APX from funding it on its own and on 18.4.1934 the APX engineers unveiled their APX-R turret. It was this turret that was eventually mated to the Renault ZM prototype. It was considerably better than Renault’s own design, but – what was more important – carried an armament based on the later specs: one 37mm SA18 gun and one MAC Mle.1931 MG.