Special thanks go to Vollketten for actually finding these documents.

This article is going to be a bit different from the past and it will contain a fair amount of speculation, so bear with me. And yes, it’s going to be about a Czechoslovak vehicle so if that’s not your cup of tea, you can move right along. Ready? Okay, here we go.

First, let’s consider the American Central Intelligence Agency. I don’t think I need to explain what CIA is but assessing its effectiveness, now, that’s harder. The public image of the CIA in recent decade or two suffered several major blow. From “finding” non-existent WMDs in Iraq over all sorts of criminal bullshit to watching Trump take a… “shower” and releasing docs about it to public, it would seem like the CIA is incompetence incarnate. Whether it truly is so or not, we probably will never learn (none of us will by alive by the time the documents will be declassified), but the real question that is relevant to this article is, how competent was it in the 1950s?

In the relatively recently declassified CIA records, one interesting note was found – a short report about an unknown tank prototype tested in April 1953 in Milovice. The tank had following properties:

The vehicle was supposedly produced by ČKD Sokolovo. But the most interesting part is: the vehicle allegedly had a rear-positioned turret. This is the original layout from the report: 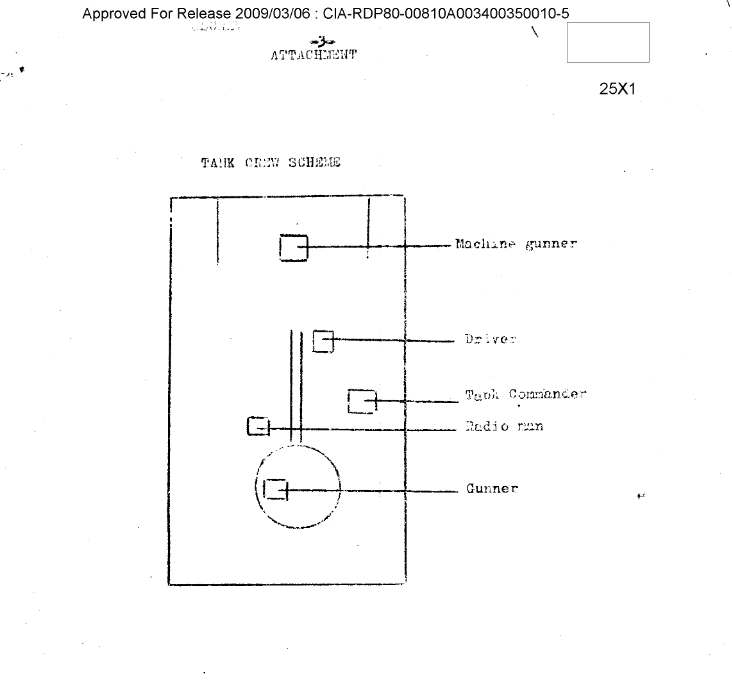 Now… the report contains things that are plausible:

- the testing place sounds correct, Milovice was really a tank proving ground
- 250hp diesel might be referring to one of the post-war experimental diesels produced by both Škoda and Praga
- ČKD is noted is the producer (correctly identifying the plant in Sokolovo), that sounds plausible

But, there seems to be far more bullshit:

- Czechoslovakia never producer or tested a 90mm cannon, the furthest this caliber got were some theoretical considerations during TVP development
- The engine is supposed to be in the back where the turret is, that’s strange
- The vehicle was supposed to use twin machineguns, we never used that design
- There is supposed to be a “radar” in the front, no idea what that is
- Fuel tanks are covered in armor with cement fillers, never heard of that, plus it sounds strange and pointless
- Proximity fuse ammunition in a tank? Never heard of that
- A separate machinegunner from a radioman? Why?

Overall, I have never heard of such a design even theoretically mentioned and would immediately discard this as some bullshit that CIA was fed. The report can be accessed here.

Now it gets interesting. There is a SECOND report that is describing such a vehicle, this time referring to summer and fall of 1955. Now, this is definitely not the same vehicle as described above, but it is a second report that mentions a rear-turret prototype.

I think I’ll let the CIA do the initial talking. 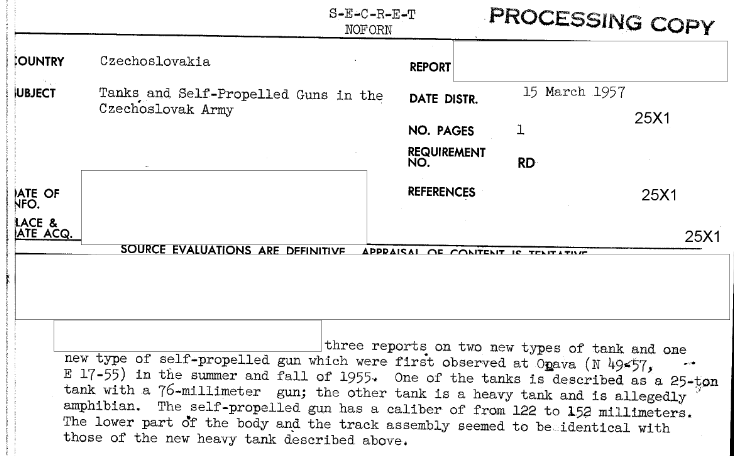 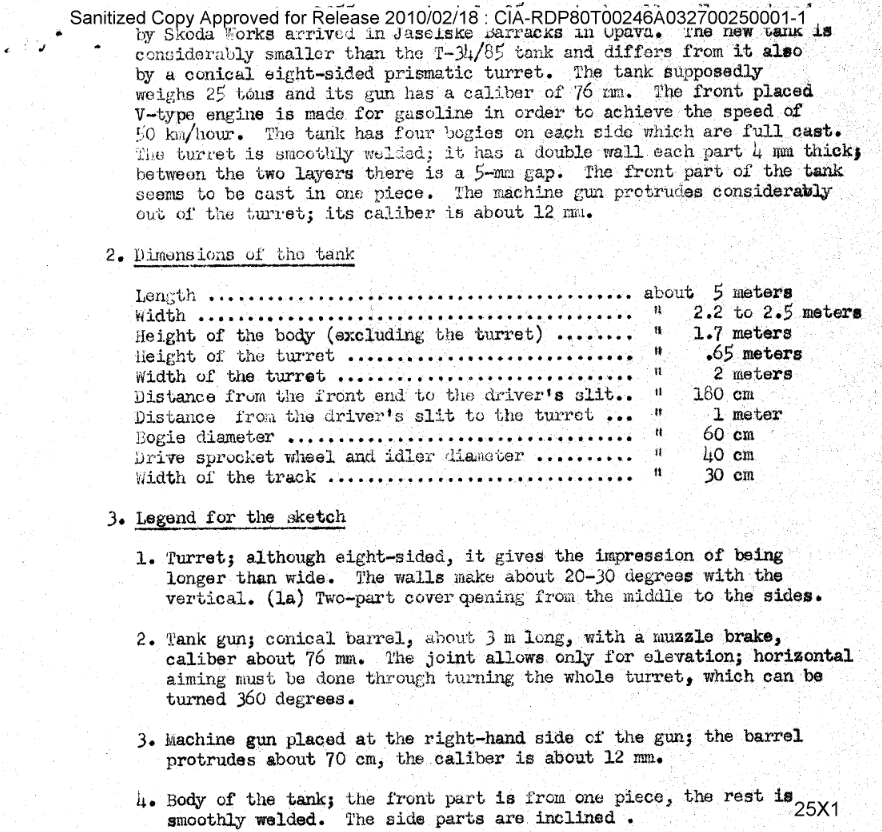 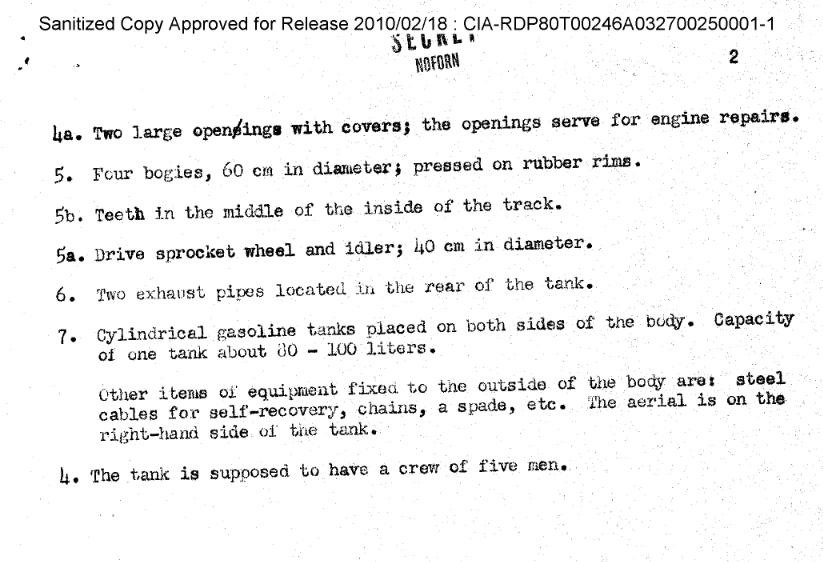 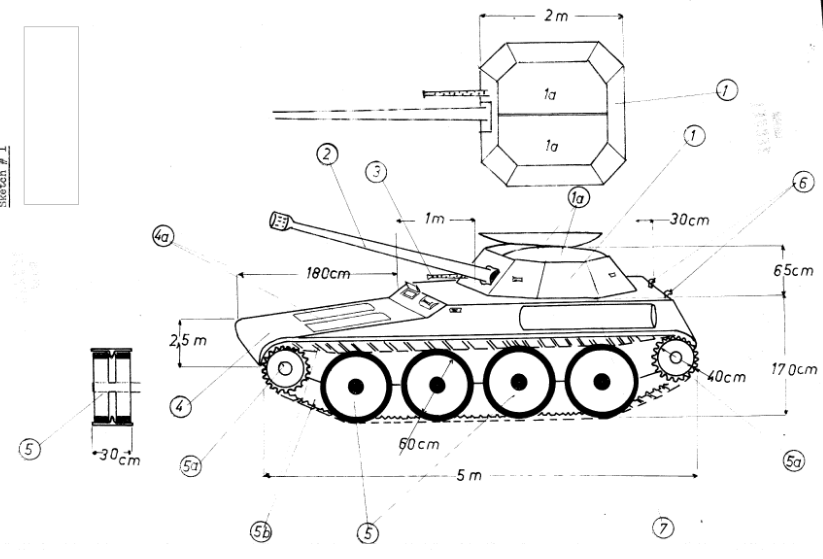 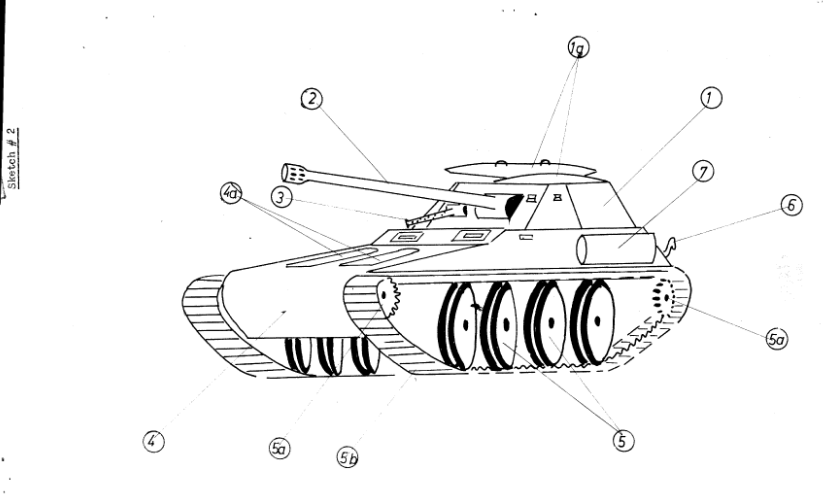 The full file can be accessed here.

Hm. It looks like nothing I’ve seen even mentioned in any documents or books.

First and foremost, there are the basics. The gun caliber (75-76mm) and weight (25 tons) classify it as a light tank (although if it was an older design, it would probably be even a medium tank). The problem with LTs is that they were developed in the late 1940s and cancelled in the early 1950s as obsolete. The manufacturer is identified as Škoda, which is even weirder – how would a spy actually know unless they examined the inside of the vehicle or knew exactly where they were from. And of course then there’s the rear turret, something I’ve never seen ona Czechoslovak tank design.

The upside for the rear turret design is the ability to mount a (more) powerful armament without totally screwing the center of gravity. This is clearly not the case. Another would be to increase the crew protection (something like in merkava), but again, I haven’t seen that line of thought anywhere really. The suspension doesn’t look like anything Czechoslovak I’ve encountered save some proposals for early TVP. We always used return rollers. It does look a bit like the Lehký Podvozek suspension used on Škoda T-17 and several SPG proposals, but again, return rollers and of course the LP suspension is not described well enough for me to know if the wheels were doubled. I think they were (Škoda used double roadwheels elsewhere and Praga did so later on). Gasoline engines were also not used since 1950 or so (the Soviet license-produced models ran on diesel). The spy identifies the engines as being of the V-type, but who knows.

The gun is interesting. Referring to the previous report (if it is indeed the same vehicle), it could be some the autoloaded version of the model from early 1947 or so (such a gun was built and tested in 1947 actually), but again, who knows. The muzzle brake does not seem plausible, we didn’t really use those, but maybe it was present on the prototype gun (no photos exist).

The multi-sided turret looks like something Škoda would build. Such designs appeared during the war (T-25) and after the war (early TVP design from 1946) but disappeared soon after in favor of the Soviet-style cast turrets. By 1955 this would be completely obsolete, just as installing a heavy machinegun would be. Makes no sense and I haven’t seen that proposed anywhere either.

Fully cast frontal hull… that sounds very odd as well, all previous proposals (including the heavier ones) were to have welded hull. It’s not technically impossible by 1955, but… I don’t know.

Apart from this Light Tank, the report also mentions a “heavy tank”: 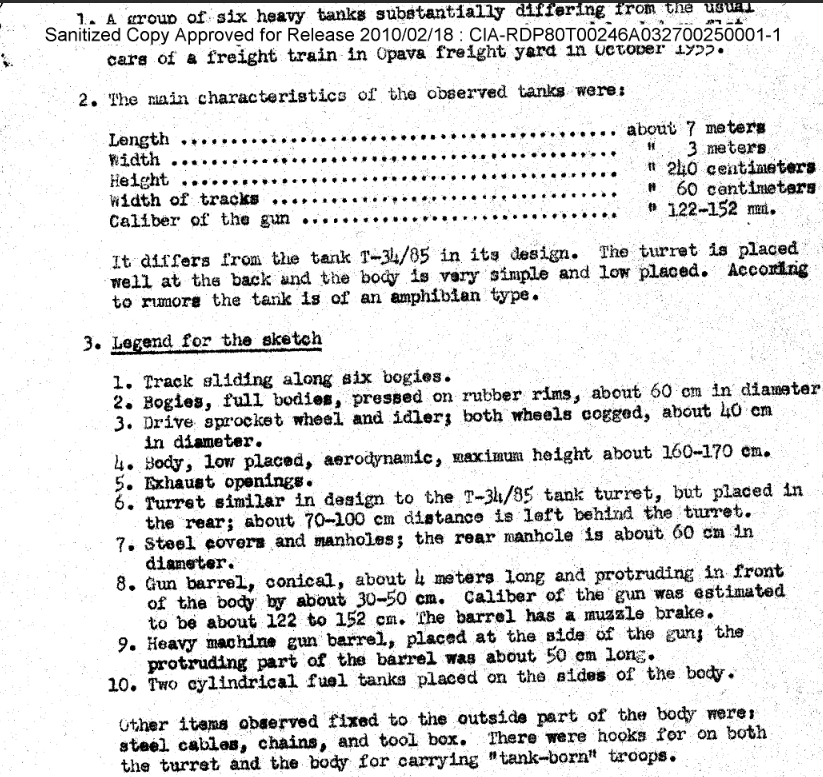 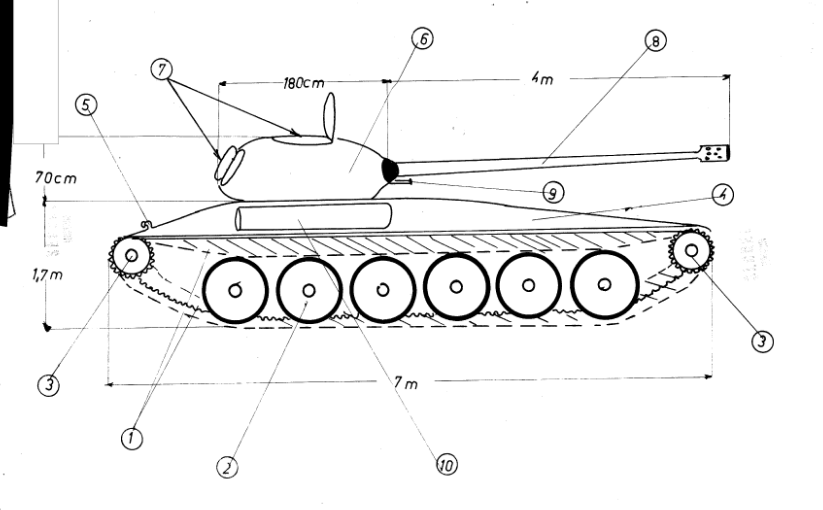 And a self-propelled gun: 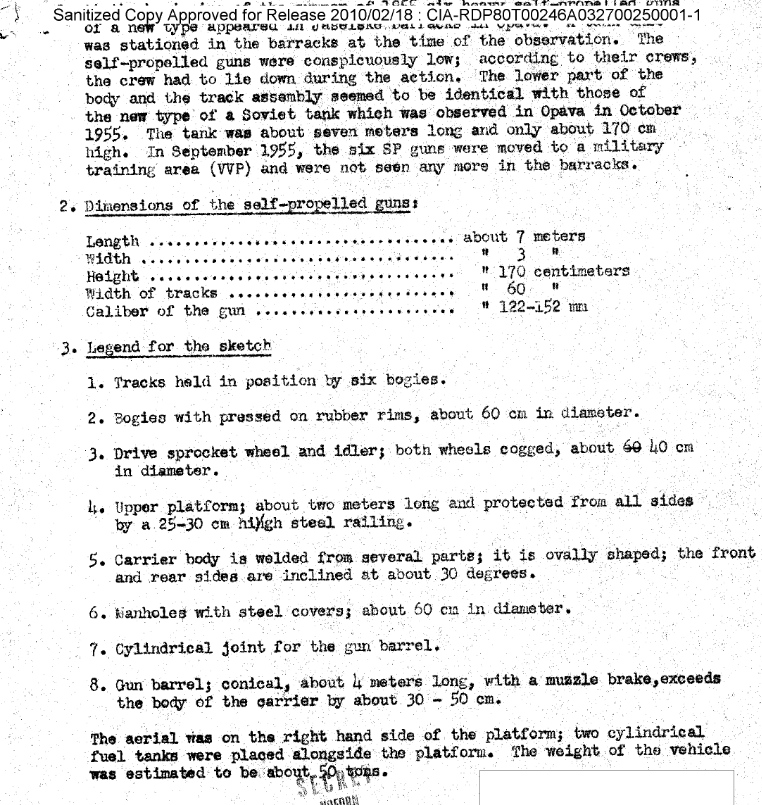 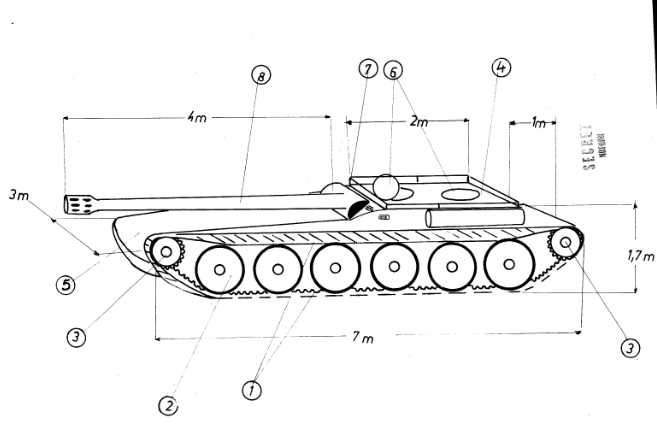 Yeah, both look like bullshit. The “heavy tank” is maybe a misidentified early T-54 abd the the SPG – I have no idea.

Of the three, the Light Tank is most plausible to have existed. The recurring theme of rear turret seems very odd to me, as I mentioned – we did not really focus on that area of design and the only “rear-turret” designs that I know of were some light anti-aircraft vehicles:

Then again, it’s very easy to dismiss something as completely wrong, so here are a few ideas that might support the theory that the vehicle actually existed.

First and foremost, much of the Czechoslovak military archives was lost or destroyed before today. In the late 1940s, Czechoslovakia was a complete mess and lots of documentation ended up god knows where. More was lost in 1989 in the chaos following the fall of the communist regime, when the Czech Republic and Slovakia split (a lot of the documentation stayed in Slovakia but unfortunately nobody seems to know where it is) and finally during the great flood of 2002 when the archive ended up filled with water and many priceless documents were lost (it never really full recovered and only now, 15 years later, was actually finally moved to a different building). It’s actually very likely that there were things that we simply don’t know about – this theory is supported for example by the recent discovery of V-8-H-Sv in Sweden by sp15 and Renhaxue.

Second theory would be that this vehicle is actually nothing new but something much older, maybe developed in the 1940s or even during the war and tested after it. Such things happened as well, the Light Tank Vz.38 was tested for example again after the war (and found obsolete of course). If this vehicle was something the Soviets captured (instead of Americans, who just took everything and brought it to the USA, which is why several unique Czechoslovak prototypes are now being kept in the USA), it might have never left Czechoslovakia (not that the Soviets didn’t take stuff at all, but a lot of the documentation stayed here actually).

The abovementioned would be supported by:

- welded, prismatic turret (last time it was proposed in 1947 or so)
- gun caliber (the gun this could be referring to was developed and tested in 1947, declared obsolete in 1950 – worth noting that this gun was developed by Škoda, just like the report suggests the tank was)
- gasoline engine (from 1950 onwards, pretty much everything proposed or built for tanks was a diesel)

The HMG installation in the turret would point at something post-war, but we don’t know how accurate the report is. The spy could have easily mistaken it for something bigger. The center-driven tracks and doubled roadwheels without return rollers were also something that appeared in Škoda design during the war, supporting the Škoda theory.

So, if the report included only the first tank alone, I would be pretty sure that the spy saw… well, something. The other two designs I am far more skeptical about, since we were not building heavy tanks and it doesn’t fit any medium tank I know of. On the other hand, it could have come from a different source and could have been compiled into one report with one source being more or less legit while other telling the truth. We’ll never know I am afraid, so in the end, it boils down to whether you believe or not. After all, it could be a counter-intelligence thing as well (until the 1960s the Czechoslovak intelligence service was a mess due to communist purges so I don’t know).

Still, it’s actually pretty interesting if nothing else. Makes you wonder what else is hidden in the CIA archives.