So, once again, WG EU dropped the ball.

Some of you might remember that some time ago, Quasar posted that Panzer 58 and other Swiss tanks won’t be implemented, while the Russian developers said they would. What I did was I asked Edrard (the wot-news guy), who relayed this question to Veider (RU forums developer), who confirmed they have a high chance of coming in the EU tree. Quasar later backedited the post.

Well, Quasar did it again:

67. Was the idea of the female crew completely abandoned?
Not at all, but it has a very low priority for the moment.

65. Any update regarding more options for customizing the exterior of our tanks?
Also at this moment in time, we are also working on projects of the rings for the gun barrels:

Edit: a screenie, because at some point it will probably get backedited, as it did in the Panzer 58 case. 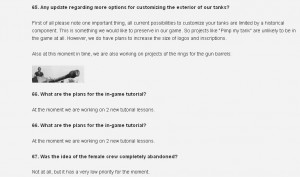 These are his answers. Those, who follow my RU translation know both of these options were denied specifically by SerB and Storm, that’s why I went and asked Russian developer Vallter directly (this post is made with his knowledge). To quote him:

“No, they will most probably not happen”

If you don’t believe me, Vallter has a blog, you can doublecheck the answers there. In other words, Quasar is pulling answers out of his ass, without checking with Minsk central. Makes you wonder, what good is such Q&A for and what ELSE is wrong…

(Special thanks to Vallter for indulging my incessant questions)