This article is the continuation of the first part.

Summary: Player KingAlphyn from US server was caught rigging a contest. After a shitstorm of moderate magnitude on US forums, he logged on and confessed he did it – not only that, he confessed to do it successfuly in the past. See for yourself: 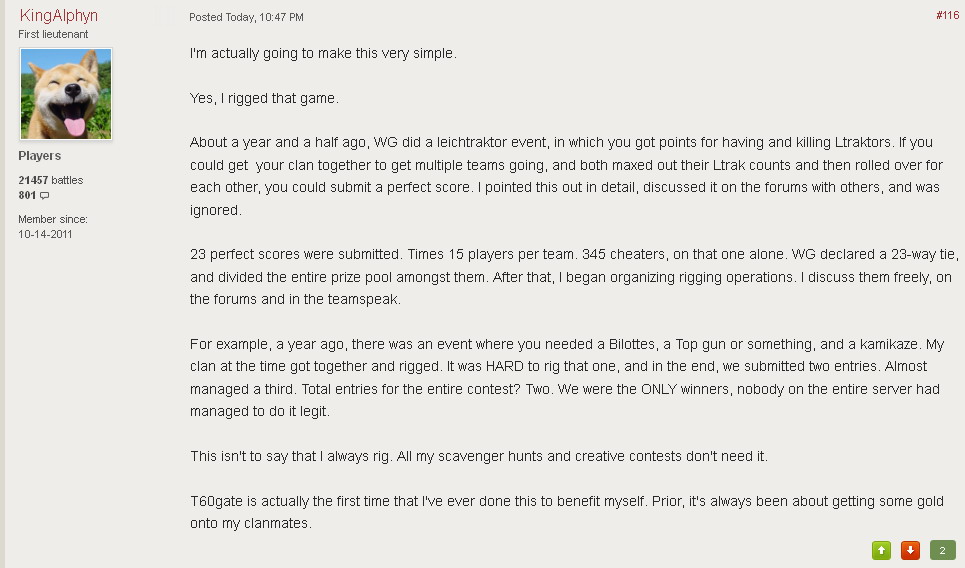 With that being out of the table, I am sure he will face some sort of punishment by Wargaming. In the aftermath of this confession, questions were raised about other clans doing the same thing by other US forumgoers. Looks like US server gets its competition scandal after all. But that is really not the problem.

The problem is: how can we trust any Wargaming competition after this? I am not referring to some Wargaming-organized rigs, no. Simple negligence to check whether the results were in order by demanding to see replays from the winners.

Since the mechanism of the competition is the same on US and EU server, we might also assume some of the results in the EU competitions were also rigged this way. It’s logical after all – unless you are stupid and submit an obviously rigged result (like 15 kills in a tier 10 vehicle or something), there is no way they can catch you, unless they specifically check the replays. This automatic XP reward system BEGS to be exploited and it’s only natural some players take advantage of it. This is not in any way excusing the culprits – of course cheaters should be punished! But it is the nature of some people to try to exploit the system, this is inevitable.

This fail doesn’t only fall on the head of the cheaters, but on Wargaming. Sure, you might say “hey, but they are so nice, they give us the chance to win something – and you are being ungrateful!” No. What they are giving us is the illusion of a winning chance – and that’s lame. If I was to take this argument to absurd conclusions, they might as well distribute the prizes to random big clans, the result would probably be similar.

What can be done about this?

First – and the most obvious one – would be to return to the old system, where replays had to be submitted. That would obviously eliminate most of such attempts, because even if they weren’t ALL thoroughly checked: would you really take that chance?

Second – cancel this type of competitions altogether. Instead, make the prizes lot smaller, but permanent. For example: 50 gold for – let’s say – 1000+ raw XP battle (depending on tier, this would have to be tested). How many of those do average players have? 1-2 per month? This would make checking for cheating easier. Statistically, various winrate categories have various amounts of such battles. If a player consistently gains more gold than he’s supposed to for his winrate, it would trigger the alarm and that player would get scrutinized (WG employees can pull out virtually any data from their database). If found cheating, he (and his accomplices!) would be banned (let’s say for a week during first offense, two months during second offense and permabanned during third).