today, we’re going to have a look at two vehicles, that share the same designation: ISU-130. One of them is however highly suspicious. First, the historical one:

This is probably the “real” ISU-130 it is perfectly suitable to be a World of Tanks premium Soviet tank destroyer.

It was built around the ISU platform (based on the Iosif Stalin heavy tank) in 1944 in Plant No.100. The lead designer of the project was the famous J.Kotin (responsible for the most famous KV and IS series tanks and also for some of the SU and ISU SPG’s, being the main designer of Soviet heavies and SPG’s of the era). The main raison d’etre of this project was the need to improve the then-contemporary Soviet 122mm (A-19) and 152mm (ML-20) self propelled guns’ firepower.

Apart from another project (ISU-122-1, which you might know as the ISU with the BL-9 gun), there was an idea to mount the 130mm marine gun on the ISU platform. The 130mm marine gun B-13 was then successfully converted for land use and redesignated S-26. This gun then replaced the D-25S on one experimental ISU-122S chassis. Later, another version of this gun was made – its caliber was changed to 122mm in order to fire the standard 122mm shells, this version was designated “S-26-1″ and was mounted on another experimental SPG, ISU-122-3.

One prototype was made, with factory trials beginning in October 1944 and a month later, trials moved to military proving ground. The trials showed some problems with the gun, which had to be re-worked and this caused a significant project delay. In the end, the project was ready only after the war was over. In June 1945, new trials took place. This time, they proved that the firepower of the ISU-130 is greater than the one of previously completed heavy SPG’s. There were other issues however: the gun proved too long and when driving thru rough terrain, it had the tendency to hit the ground. Furthermore, no other land guns in the Red Army used the 130mm caliber and it was thought that the different marine caliber would cause problems in supplying. The 130mm S-26 gun also proved not to be better (but equal) to the 122mm S-26-1 and BL-9 guns. That, along with the fact the war was over, led to the cancellation of the whole project. In the end, the vehicle was not accepted in service and the prototype ended up in Kubinka museum.

In World of Tanks terms, it’s probably a very good tier 8 premium candidate. The gun would fit, the finetuning can be done by the soft stats. Of course, the depression wouldn’t provide much comfort, but the massive firepower could make up for that.

There was however one more ISU-130 in the Soviet arsenal: 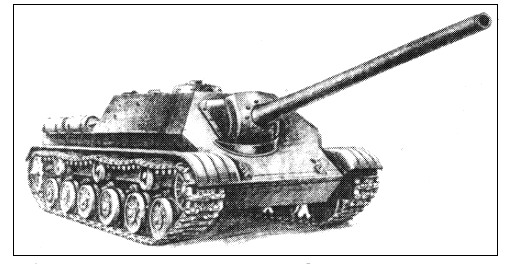 Now, this is a bit confusing. I am not an expert on Soviet tanks, but I haven’t found any mention of this vehicle in any other (limited) Russian vehicles literature I have. Apparently, it’s supposed to be a late war SPG (constructed in the same plant as the other ISU-130 – Zavod No.100), based on IS-3 (!) chassis, tested in June 1945 to August with the marine B-13 gun (the book specifically mentions B-13, not S-26). This gun was equipped with a muzzle brake to reduce the recoil (note that there is no muzzle brake on the picture for some reason). It was allegedely built in one prototype, weighting 47 tons (notice exactly the same weight as the “previous” ISU-130). The book describes that it suffered from the same problems as the other ISU-130 (too long barrel, low maneuverability, and bad traverse angles) and was – just like the other ISU-130 – scrapped after the war.

The drawing looks a LOT like the ISU-152 Model 1945 (known to the WoT players as Object 704), which WAS partially based on the IS-3 tanks. I haven’t found (even on Russian sites and in Russian books) any mention of arming the Object 704 with a B-13 gun however, so I somehow suspect that the author of the book mashed up Object 704 and ISU-130 together, producing this result.

According to wikipedia and the book, the vehicle was of the same height as the Object 704 (original ISU-130 was taller), it used the same engine as the original ISU-130 (but – to be fair – so did the Object 704), its armor roughly corresponds to Object 704, but the gun (B-13, mind you) has the same traverse, depression and elevation as the ISU-130. How did they manage to archieve that in a clearly sloped superstructure (when ISU-130 had much less superstructure slopes and was taller), I have no idea, but I think it’s really suspicious.

Does anyone have any info on this vehicle?

Characteristics, according to the book: