- Superpershing: the strip of improved upper hull armor was made two times wider (in accordance with the visual model)
- E-75 bad and medium terrain passability was significantly improved
- the ammo sliders were returned to the way they were before for now, the new variant will be implemented later with other fixes (most likely with the possibility to lock the respective types of shells)
- there will be a surprise concerning the global rating, a special article on that will be prepared
- the British blue stripe camo will return to the way it was before

- there is still a heated internal debate whether the KV-1S will lose the 122mm or not
- Object 140 turret armor will be reworked (it will resemble the T-62A turret more), but not now – somewhere around patch 0.9.0, as there will be additional testing needed after such rework
- the Historical battles concept is mostly ready and it now waits for documentation and implementation. It was finally decided how we will do it. When? “When it’s done, it’s done”, as usual.

- Foch 155 will be rebalanced, this year
- Object 268 will generally not be touched
- the “discussion” about KV-1S gun is “SerB against everyone”
- the rating “surprise” will be “some changes in rating logic” (SS: later on, Storm mentioned twinks in such a context that my guess (!!!) is that it will be something to make twinks/sealclubbers/pedobears (whichever term you prefer) not have a good rating, in later comment another developer does mention “Seaclubbers running away, yes. Just as planned”)
- Storm confirms that the new rating will take amount of battles into account
- the Object 140 turret will not be identical to T-62A turret, but it will be “brought closer” to it, the turret roof will still be 30mm, as it was on Object 907 and Object 430, clearance might be a bit higher
- Storm on kill marks on tanks: “Every nation did it differently. It’s pretty hard to make. Either will either be historical and hard to see, or unhistorical and easy to see. Both options are bad.”
- 7/42 will come soon, when it comes out, it will be without skill MM however
- currently supertested are the Kharkov and Minsk maps, there will be new city maps in random
- apparently, this area of Kharkov will be turned into a map: 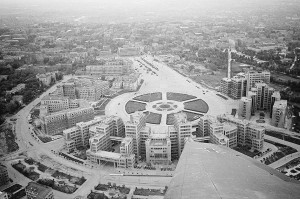 - apart from Minsk and Kharkov, Stalingrad will also be implemented
- the blue British stripe camo will return, because the historical version turned out to be too ugly. There will be both variants implemented: the new and the old one, so there are no issues with compensations
- there is still not enough info on the tier 9 Soviet Kharkov medium tank, there will be people going to Kharkov to collect more evidence
- in 8.8, Superpershing will also have its turret rotation and gun aim spread (accuracy) changed allegedly (SS: we’ll have to wait for test 2 changes), and that’s all – no more changes to SP after 8.8
- the rating article mentioned above will come before the patch, or with it
- new aim reticle (dot) and reload timer will come out in 8.9
- Storm states that bigger maps are not important for players, they only seem interesting. According to tests, the gameplay on bigger maps is not as good as people imagine.
- there is some FPS optimization in every patch
- the client physics is being developed, but it will have little influence on gameplay, the game will only look nicer