today, we are going to have a look at the main light tank and first modern armored vehicle of the Hungarian army: Toldi light tank.

First, let’s have a look at the background, that led to the purchase and manufacture of this light tank. For the whole duration of its inter-war existence, Hungary faced issues tied to the rise of extremism. This happened pretty much everywhere in Europe: communist activists on one side (lobbying for close relationships with the Soviet Union), fascist nad nazi sympathizer on the other, pushing for close relationship with Germany and Italy. The latter gained the upper hand in early 30′s, as in 1932, Gyula Gömbös (one of the prominent fascist sympathizers) became the prime minister of Hungary. Gömbös tried to bring Hungary closer to Nazi Germany, seeing it as an opportunity to get rid of the hated Trianon treaty and to gain some power at the same time. This was the beginning of the Germany-Hungary cooperation, that would end only when Hungary was effectively defeated by the Soviets. Gömbös died in 1936 and was replaced by more pragmatic politicians, but the course was set and there was no turning back.

In the meanwhile, as we mentioned earlier, the army was also trying to get rid of the Trianon shackles. The Straussler tank program (described in part 1) was an important step, but it certainly was not the first one. The history of Hungarian armor started as early as in 1924, when an armored car section was estabilished as a part of the RUISK police academy. The first armored vehicles in Hungary were in fact converted trucks with armor plates added and equipped with primitive hand-cranked turrets. Combat value of these vehicles was zero, but it allowed the Hungarian officers to start developing first armor tactics and to train on them. It also served to prepare future armor drivers. The army however was still very oldschool (mixed infantry/bicycle units with cavalry and limited field artillery support) even after the 1921 reorganization.

The armored car section grew during the twenties, growing in secret to avoid the attention of Allied forces inspectors, enforcing the Trianon treaty. Two Vickers-Armstrong armored cars were secretly purchased, along with a Krupp armored truck. Furthermore, two Crossley trucks were converted by adding armored plates. All in all, in 1929 RUISK had 7 armored cars, but their military value was extremely low and they were suited only for training or police duties. And so the officers trained hard.

What however noone knew was one of the best-kept state secrets: in Spring 1920, Hungary managed to purchase 14 WW1 era LKII German light tanks and smuggle them disassembled into the country via ships on Danube. The vehicles came from the stocks of Imperial Mackensen’s army. The contract was camouflaged as a contract with Sweden (where LKII tanks were legally exported and later even manufactured under the name Strv M/21). Despite not being as good as the ubiquitous FT-17, these tanks still were a force to be reckoned with in 1920. However, this undertaking proved to be for naught. Simply put: these vehicles were such a tightly kept secret that they stayed disassembled for 7 long years until 1927, when 5 or 7 vehicles were put together and tested. Chosen reliable officers had the possibility to test a real tank for the first time and this experience also helped in developing new tactics for RUISK. 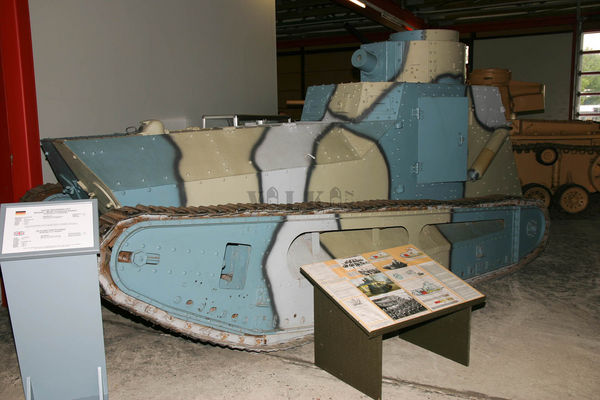 On paper, the RUISK unit in 1930 had 5 LKII tanks, 8 armored cars and one command car (the Krupp one). Several more improvised armored cars were added (some with mock-up constructions to resemble training). As for the LKII tanks – sadly, pretty much all of them were scrapped before the war or used as live fire targets.

By the end of the 20′s, Hungarian army command – not oblivious to the rapid development of armor in Czechoslovakia, Poland and Germany, did realize the need to upgrade its army with some serious armored units. The first idea was to acquire some light vehicles (light tanks or tankettes), but since Hungarian industry was in no shape to design, let alone mass-produce such vehicles, the army had to shop abroad. The first acquisitions in 1930 were five Italian Fiat 3000B tanks (practically a license-built FT-17 with some improvements). These vehicles were unarmed (although in one or two cases they were fitted with a Hungarian machinegun locally) and were kept around as training vehicles. They were removed from the training units in 1942 and ended their “career” as artillery practice targets. Here’s how it looked: 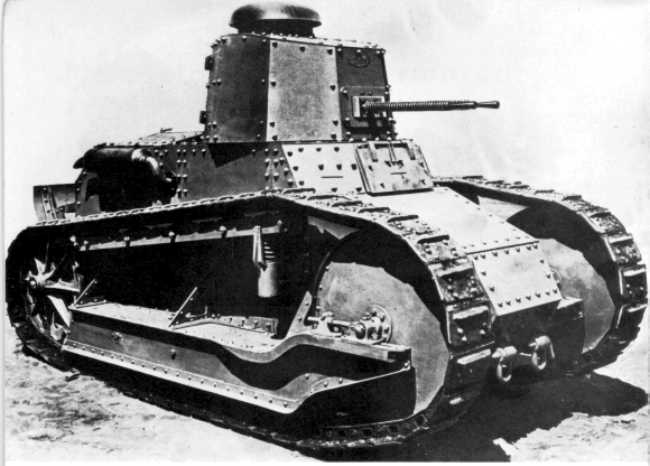 In 1934, another deal with Italy was struck – this time to purchase a lot of tankettes: Fiat-Ansaldo CV-33 to be exact. In the end, 150 were delivered to Hungary under the designation “35M”. The difference between them and the original version was the fact that they were armed by twin 8mm Gebauer machineguns. In Hungarian service it looked like this: 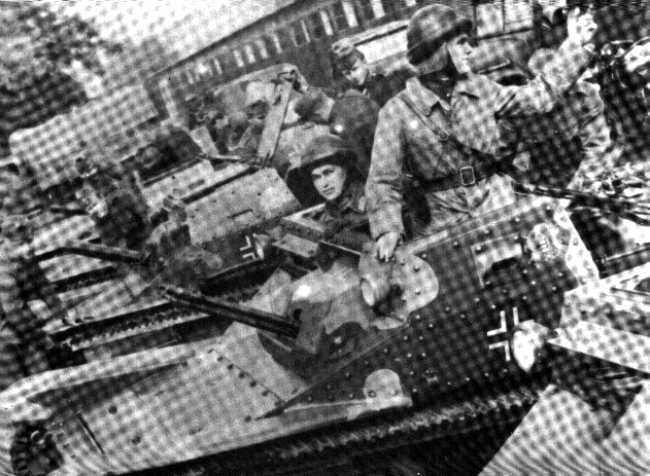 In 1935, one Panzer I Ausf.A was aquired for testing, but not much is known about it apart from the fact the Hungarians weren’t thrilled with it (the tank ended as a training vehicle and was probably later scrapped). By this time, the Straussler prototypes were also tested (unsuccessfully) – so the army had to look elsewhere. And – apart from the Czechoslovak T-21 – its eyes fell upon the Landsverk L-60 tank. 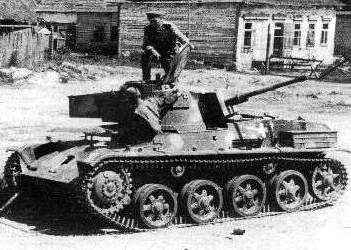 The Landsverk L-60 tank was – in 1934, when it was designed – one of the most advanced tanks in the world and it was the pride of the Swedish industry. It was also available for export, but it wasn’t too successful (apart from Hungary, Ireland and Austria were also interested). First Hungarian contact with Landsverk happened in 1936 and in the following months, Hungarian company MÁVAG (“Magyar Királyi Államvasutak Gépgyára”, Royal Hungarian Railway Company) negotiated the purchase of a test vehicle and plans for building this tank. This resulted in the 1938 import of one L-60 to Hungary, where it was tested and compared to the locally designed Straussler V-4. As we know, the L-60 ended up as the winner of this.

As I mentioned before, for its time, the L-60 was very modern. The armor was mostly welded (riveted at some points too) and it was also sloped, increasing its effectivity. The suspension however was the most significant improvement, as it used torsion bars, not the old leaf spring systems, installed on many of its contemporaries. It was powered by an 8-liter Bussing-NAG L8V/36TR 155hp engine, allowing it to go as fast as 50km/h (and this was still in 1934!). It had a 3 man crew: the driver and two men in the turret. Originally, the L-60 was to be equipped with a Madsen 20mm gun, but this was later changed in Hungary. Its main weakness however was the tankette-grade armor (only 13mm). In terms of early 30′s mindset it was excusable (tanks were still viewed as vehicles to fight enemy infantry and were expected to withstand only rifle and machinegun fire), but in WW2 terms it proved to be completely insufficient.

This one purchased vehicle was tested in June 1938 in Hajmaskri and Varpalot military areas, driving trials were performed by drving from Veszprem to Zira and Györ. The military committee was quite satisfied, but recommended some changes to be made, such as improving the suspension (making it more durable), improving the crew compartment ventilation, improving the tank periscope and a few other smaller things. The insufficient armor was also mentioned.

In September 1938, these demands were evaluated by the MÁVAG and Ganz company representatives – some were rejected due to time constrains, because everyone wanted to start producing the vehicle as soon as possible. Regarding the armament, Hungarians had many options. The original Madsen 20mm gun from the L-60 was refused, because its design was too complicated for field repairs. Gebauer (local Hungarian producer) prepared a 25mm gun project, but that proved to be unreliable. Other projects (such as the 25mm Bofors, 37mm Bofors and 40mm 37M (licensed Bofors) or 20mm Gebauer) would (apart from also having reliability issues) require the turret to be redesigned and that was something noone wanted to get into. In the end, HTI (Hungarian Technical Institute) recommended using locally-produced semi-automatic 20mm anti-tank rifle as the vehicle’s main armament. Essentially it was a license-produced Swiss 20mm Solothurn rifle with some modifications (for example the 5 round ammunition clip proved to be too long, preventing gun depression and was replaced by a 4 round one). It wasn’t a very powerful weapon: at 100m it could penetrate only 18mm of armor (60 degrees, in WoT terms it’s cca 20-21mm penetration), making it useless against anything heavier than armored cars and light tanks. When engaging heavier tanks, all the gunner could do was aim for the enemy tracks and hope to immobilize him. The gun was paired with a Gebauer 8mm machinegun (34/37M), produced by Danuvia in Budapest.

With such modifications, the L-60 in Hungarian service was redesignated to 38.M Toldi. It was named after Miklos Toldi, legendary 14th century Hungarian warrior and hero, known for his strength. It was decided to mass-produce this vehicle in Hungary, but mass-production was delayed by squabbles between the producers (MÁVAG and Ganz Gepgyár) and the army over the price. At first, the army wanted to order 64 vehicles, but it was decided at least 80 were needed and the order for 80 tanks was finalized on 17.2.1939.

Between February and September 1939, a prototype was built and components were tested: specifically the 20mm AT gun in the turret. Furthermore, locally-produced R-9 radiostation by company “Standard” was implemented into the design. The mass-production itself was initiated in Autumn 1939 and the Hungarian army expected to recieve first 32 vehicles until the end of the year. However, that was not to be, in 1939 the army didn’t recieve a single completed vehicle, as the production was halted by delays in components, that had to be ordered abroad. Specifically it was the Zahnradfabrik transmission, Bussing NAG engine, drivetrain components from Trelleborg Sweden, German Hosch torsion bars and Zeiss optics plus periscopes. This was considered unacceptable by the Hungarian army – it was decided that by 1940 all the components for the tank should be produced manually. The army was willing to break all the international intellectual property and patent treaties, a move that caused notable friction with the Germans, who wanted to keep their stranglehold on Hungarian military via their supply chain. This tactic – although quite “dirty” – worked very well on other “allies” of Germany, such as Romania.

First two Toldi tanks were finished by February 1940, but the rest were still waiting in the plants for the components. Until June 1940, 20 vehicles in total were completed – by that point the timetable for the entire project was completely off, all 80 vehicles were supposed to be delivered by Spring 1940, but the latest estimates did postpone the production completion to March 1941.

The biggest issues that the production faced were delivery shortages of Zeiss gunsights, that couldn’t be copied locally and were arriving only sporadically and in insufficient numbers from Germany. Torsion bars also proved to be problematic: once again, the Germans cheated their allies by delivering second-rate stuff. The bars broke all the time and this issue was not fixed until local copies were produced by the end of 1940. Hungarian engineers did add their own solutions to the design as the production went on and as a result of this, the last models of the first 80 piece batch were somewhat different from the early ones. All the changes added to the vehicles were incorporated into the second batch later. To distinguish these versions, in March 1941, the first 80 vehicles were renamed from 38.M Toldi to Toldi I. Here’s how Toldi I looked: 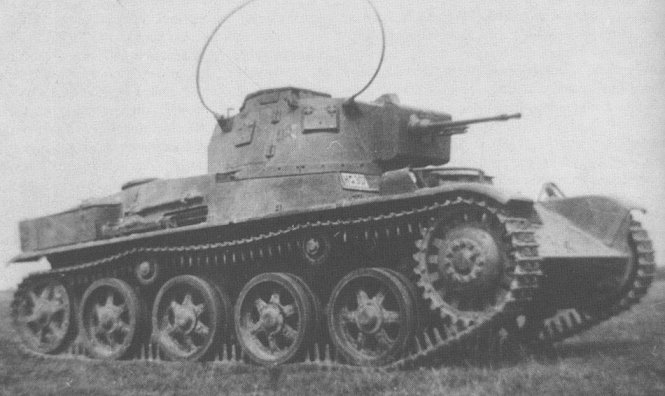