Overlord is asking for your opinion on test 8.10, he also released the WoT:Blitz American tech tree.

Q: “SerB, you said that winrate is just like any other human growth. But human growth depends on parent genetic material – it is almost completely predetermined. Is winrate also genetically predetermined?”
A: “Yes, winrate also depends on parent genetic material and is also predetermined. But not only that – unlike the growth, in case of winrate, upbringing (the skill of working in a group) and education (understanding tactic principles) and training also play a role”

Q: “Is there a plan to remove winrate altogether? It has many negative aspects, why is it necessery at all?”
A: “I will meditate on that… no, I don’t even know what to say, I have no words. Young man, understand that winrate is just the amount of your victories, divided by the amount of your battles in general and multiplied by 100. To remove this indicator is possible only if we reset the battle count to zero (and in your case, use the free time to train your mental abilities).”

- in 8.10, in the post battle announcement (the small one in lower right corner), WG removed the amount of credits spent on shells and repairs. This was made intentionally, according to Storm: (left – old, right – new) 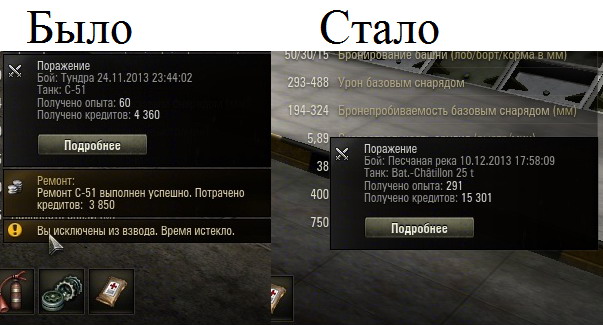 - Japanese lowtier guns have very poor accuracy “for balancing reasons”
- the color of Japanese tanks was changed to green based on player feedback (SS: specifically Russian players)
- apparently lags on servers are still being looked into
- Overlord states that the nasty FPS drops will hopefully be fixed by final release
- closed beta of WoT Blitz will start early next year
- maps in WoT Blitz are 4 times smaller than in WoT, they will be completely new maps, not WoT ports, however some maps from WoT might be added, like Mines