if you played on low tiers during this Christmas, you are probably familiar with this situation: you want to take your shiny new gift tank for a spin, enter the battle and… both teams have a sealclubbing platoon of T18 TD’s, played by experienced players with trained crews – and you can’t do anything about it, your bullets (literally, as the main gun of the Vickers Mk.VIc is a machinegun) bounce off it and it tears your team up – whichever team has better T18 players, wins. Your first thought: that thing’s overpowered, we should get rid of it!

But wait, we can’t just do that. There has to be a reason. Let’s break down the T18 situation into three questions:

- is it really overpowered?
- is it historical?
- what can be done about that?

T18 tier 2 US TD is one of the typical “statpadding” and “sealclubbing” vehicles. If you are wondering, what the hell is statpadding and sealclubbing: statpadding is artificially making your stats better so you appear as a better player than you really are by using overpowered or broken vehicles. Sealclubbing (also called pedobearing or twinking) is a situation, where an experienced player takes his trained crew and return to very low tiers to prey upon the newbies with it – his skill, experience and trained crew giving him an obvious advantage. Technically, sealclubbing is “just” the means you use when you are statpadding, but not always – some people do it simply for fun.

While not illegal, both such practices are frowned upon and are generally (in gaming world that is, as this issue exists in pretty much any game, separated by levels or tiers) considered dishonorable. That obviously can’t stop trolls, sealclubbers and statpadders from doing it anyway, but it should not be encouraged, as it drivesnew players away.

The T18 is a really bad case of a broken vehicle due to its thick armor. While not that big of a deal to an experienced players, combined with a powerful howitzer gun, it might definitely seem unbeatable to new players who drive around in their machinegun tanks. But is it REALLY overpowered?

Yes, yes it is. Take a look at this graph, made using Edrard’s “new method” tool on wot-news (if you don’t know what this graph means and are interested in it, I suggest you read this post first)

Here you can see that the vehicle is clearly OP. The “meeting point” (where the general winrate and the vehicle winrate cross) is very low (46 percent). That means that as long as you are a player with winrate 46 percent or more, you will achieve better winrate on this vehicle than is your regular winrate, sometimes significantly. Just for comparison, this is the data for KV-1S (a vehicle universally recognized as one of the most OP vehicles out there):

While the KV-1S curve looks a bit different, there are two important comparison moments. First, the “meeting point” for the T18 is even lower (46 percent) than the one for KV-1S (47 percent). That basically means you need even less skill to achieve better results for the T18 than for the KV-1S. Second point is, if you have a look at both of the curves, they start to differ significantly above 55 percent winrate, but up to 55 percent, T18 curve is actually even a bit higher. That – in simple terms – means that for players from 46 to 55 percent winrate (which is probably like 95 percent of the playerbase), T18 is even more overpowered than the KV-1S!

Strangely enough, using wot-news as the same reference, the winrate of the T18 is not that high as its stats would suggest: 50,11 percent for last four weeks (this is for the EU server). What is even stranger is that the RU server stats – while the T18 winrate there is higher on the RU server (50,36 percent), but ever since January 2013, Russian winrate on this vehicle has been steadily dropping, while the EU winrate stagnates on the same level for practically a year. I can only guess that this is due to the influx of new players, who have to “get over it” without knowing what to do.

The vehicle average on this tier overall is around 48-49 percent, so it is OP from this point of view (using the same method, KV-1S overally winrate is 49,6 percent and we all know how broken that tank is). So yes, using even regular winrate we still have an issue here.

I will take a guess here and will blame it on the armor. A vehicle so resistant on such a low tier (it can be safely knocked out only by other tank destroyers or tanks carrying 37mm and bigger guns) is always going to be a problem.

Yes and no. The vehicle is not a fake if that’s what you mean – it was an evolution step to the M8 Scott HMC. However, there is one significant catch: it was not a tank destroyer, it always was an artillery vehicle (SPG). This issue plagues the US tree in general in fact – the T82 also was an artillery vehicle, but the T57 (SPG in the game) was a tank destroyer. The_Chieftain from US forums has been fighting for a long time to get this fixed, but given the Wargaming response times, nothing came of it – for now at least, despite it being an elegant solution: switching the T57 SPG to TD (as it was in real life) would solve the armor problem, while T18 “artillery” piece would be heavily armored, but also extremely sluggish (artillery as a class gets a mobility nerf almost every time, the “fast” artillery vehicles such as the British FV304 being the exceptions), which would solve the whole sealclubbing thing.

What can be done about it?

Well, I mentioned one of the solutions above, but that would require complete rebalance of both (or even three/four, should the tree be made historical) vehicles and that’s not a simple or easy thing to do. Therefore, there is one more solution – not exactly historical (a SPG would stay as a TD), but “simplier” in terms of balance. Replace the T18 with the T3 HMC.

The T3 Howitzer Motor Carriage was an experimental vehicle, that can be found in Hunnicutt’s “Stuart” book (thanks to Priory_of_Sion for telling me). It was the first step in the direction, that would eventually lead to the M8 HMC (T18 was the second step in the line). This is how it looked: 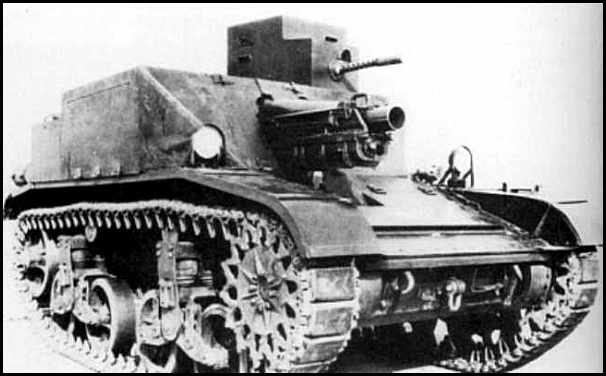 It’s worth noting that the initiative to replace the T18 with the T3 is not new. While American vehicles are not a priority for the EU server, on the US server the discussion about them is (logically) more lively and several people were suggesting this switch, perhaps as early as a year ago, so the credit for this idea goes to them, not to me.

About the T3 then: it was a 1939 project to build a self-propelled gun on the chassis of the M1 Combat Car. The main gun was the M1A1 75mm howitzer (same gun as the T18 has in the game). The armor was significantly thinner: the hull front was only 5/8in (15,9mm) thick, the sides of the superstructure were 1/2in (12,7mm) thick and the rear was only 1/4in (6,3mm) thick. The main drawback seems to be the fact that if the doors of the superstructure were closed, the gun could not traverse at all. If these doors were open (can be modelled or simply omitted), the gun could travel 10 degrees to the left and 15 degrees to the right. The gun could depress to -10 degrees and elevate to 20 degrees. The vehicle had a crew of three, weighed cca 9 tons and
could go as fast as 45 miles per hour (72 km/h!).

The vehicle was rejected by the Field Artillery Board (see? artillery) because it offered too little space for the crew inside (in game terms, this could be compensated by reduced rate of fire) and the fact a single loader would be too strained firing the 75mm gun quickly. Later tests conducted at Aberdeen however proved this to be false – the vehicle would be suitable for service. Only one prototype was built however, the vehicle was not mass-produced.

As you can see, in game terms, it would be a trade-off. The armor would be gone, but the gun would remain and there would be additional speed (although how MUCH speed and how the acceleration would be is another matter – M1 Combat Car itself was powered by a 250hp Continental W-670 – 27,7 hp/t!) – it would still be a trolltank (speed + powerful gun), but it would no longer have that “I am shooting it and it does nothing” factor.

So yes, I think this would be a suitable replacement without rebalancing other vehicles. Of course, a model would have to be made, so resource-wise, I am not sure whether this is actually cheaper, but it sounds easy enough.

A History of the American Light Tank (Vol.I: Stuart) by R.P.Hunnicutt

154 thoughts on “Getting rid of the overpowered T18”