so, many of you were no doubt surprised by Storm’s announcement. That’s right, German tier 8 premium medium tank is coming! What can it be? Well, let’s have some speculations, shall we?

Let’s start with what will it NOT be. There are two obvious candidates for German slots, both of foreign origin. First is the M47 Patton II. Basically, it early/mid 50′s, the Bundeswehr (West-German army) was looking for its new battle tank. One of the early ideas was to restart the production of modernized Panther tank, but that idea lost to the purchase of American M47 Patton tanks. These tanks served from mid-50′s until 1965, when they were replaced by the Leopard tank. Their 90mm guns (M36) were then re-used for the construction of the Kanonenjagdpanzer tank destroyer vehicles. 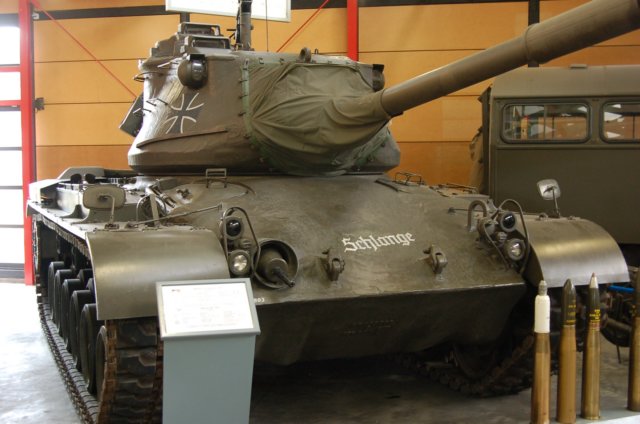 Well, I think the reason this won’t appear as a medium tank is quite obvious. For starters, it’s not a German tank. When you look at the premium tanks in general, introducing foreign tanks as premiums is not that common and certainly not a trend. Foreign premiums can be divided into:

- very early tank models of tanks that actually fought in the war (and thus are significant), like the Soviet Valentine, Soviet Churchill and such
- tanks that are tied to the nation in various way, including development (American Ram for example)
- tanks, that were “renationalized” out of complete necessity, because there was no better local candidate (French Marder I aka “FCM” TD, French LeFH arty)

The M47 falls into neither of these categories. There is also the matter of it being overpowered for a tier 8 premium, which is (gameplay-wise) supposed to be worse than an actual tier 8 tank. I am quite certain the M47 doesn’t fit.

Another tank sometimes brought up is the East-German T-54/T-55. Again, absolutely the same applies: too overpowered for the spot and what would be even worse: it would be another T-54 clone, I think we really have enough of those (especially given the fact that another one is coming as the Soviet premium tier 8 vehicle).

Alright, what is left? Well, not much. There is the Leopard Prototyp der Arbeitsgruppe B (Leopard Proto B).

Leopard prototype B is the unsuccessful project, created by the Leopard developer “Group B”, consisting of Ruhrstahl, Hanomag and Henschel. It’s not very different from the tier 9 vehicle in the game (both were made according to the same specifications), so you can imagine it would be quite overpowered for a tier 8 premium position. With good mobility and a relatively powerful gun, its introduction as a tier 8 medium tank is unlikely.

So, what’s left. The Panthers.

First, the “historical” Panther II. I say “historical” ironically, because it’s not exactly a historical version either. As you probably know, Panther II project was discontinued quite early on. One of the reasons of its existence was its stronger side armor, capable of resisting anti-tank rifles, that were used on the eastern front in huge numbers, because they were issued en-masse to infantry units. These rifles were capable not only of penetrating the vulnerable side armor of Panzer III and IV hulls, but also of Panther tanks, leading to the development of means to fight them. One of these means was the Panther II, but since the German engineers discovered that this issue can be solved (much cheaper) by installing the Schurzen side plates (these are meant to fight AT rifles, NOT HEAT shells), the project lost its significance and was cancelled. One hull was made (without a turret) and it was captured by the Americans, moved to Aberdeen and fitted with a Panther I Ausf.G turret they had. Ironically, this setup is even more historical than the Schmalturm Panther II, because Schmalturm came much later, but nevertheless, it’s unhistorical. 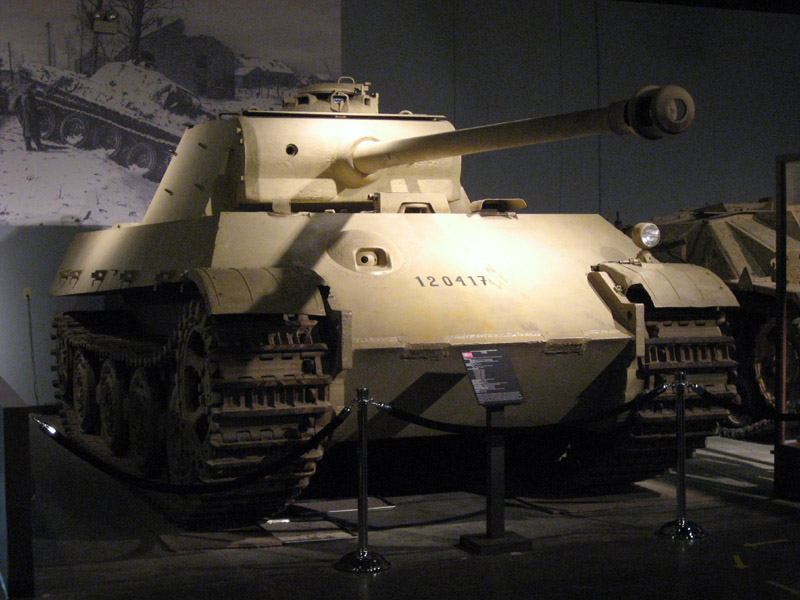 The problem with this vehicle is that apart from additional protection, it has no real advantage over tier 7 Panther I with the L/70 gun. It’s bad. Simple 75mm L/70 can’t do much on tier 8. A solution would be to fit it with an autoloader, historically planned for Panther, but that again came much later and would be again completely unhistorical.

Now, I came up with only two more ideas of what it could be, one is much more likely than the other (even though not as cool). The cool variant would be the turbine Panther. Here’s how it would look (based on a model kit, the left one is with the 1150hp GT-102 turbine, the right one with the GT-101 turbine):

I wrote it in much more detail here. Now, what would we have here would be an ultra-fast Panther with a turbine engine, which would compensate for the (weaker) L/70 gun performance. The gun however could be autoloaded. I do not think this will appear in the game for various reasons however (although it would be really awesome):

- turbine sound: it would have to be implemented specifically for this vehicle
- insane power-to-weight ratio for a medium tank
- relatively weak performance of the L/70 gun

No. What I think will appear in the game… is this.

This is Panther I Ausf.F with Schmalturm and 88mm L/71 gun. It was a late war project, that was never completed, but it is historical nevertheless. I wrote about Panther F here. To quote myself:

Furthermore, in January 1945, a Schmalturm for Panther with KwK 43 (88mm L/71) was proposed by Daimler Benz. The first drawing of the DB turret actually comes from 18.10.1944 and based on that, DB recieved a contract to develop this variant and it was in January they presented the results. It was to have a -8/+15 elevation and depression and was to be equipped with SFZ2 or SFZ3 stabilized gunsights. And all that while the whole thing weighted only a ton more than the current Panther turret. However, the work on that never got beyond wooden mockup, that was found in the DB plant after the war.

The parameters of Panther Ausf.F are well known. It was armored just as much as Panther I Ausf.G (80mm frontal plate, 50mm lower frontal plate, 40-50mm sides) with Schmalturm mounted on it (150mm mantlet, 120mm turret front, 60mm turret sides and 60mm turret rear), while basically keeping the weight. It was to be powered by a 700hp Maybach HL230 P30 engine and its maximum speed was 46 km/h.

This is basically the best candidate I’ve been able to come up with and I doubt there is any better candidate for the position out there. Its main problem is that it is simply a Panther clone and we already have that, but considering the amount of various other clones (T-54), I guess Wargaming would be willing to make that sacrifice. Personally, I would prefer something cooler, but… yea.

100 thoughts on “About the German tier 8 premium medium tank”