SS: Hello everyone. In today’s post by Karika, we’ll talk about Tas Rohamlöveg Hungarian tank destroyer project. Now, you might remember that I already wrote once about it in the past. This article is a bit different though – for one, it’s more detailed. And secondly, it uses native Hungarian sources, which is very important. Enjoy!

The Tas rohamlöveg, a proposed assault gun version of the Hungarian 44M. Tas medium tank, is not as historical as some older history books and articles claims, because no prototype has been ever made of it. 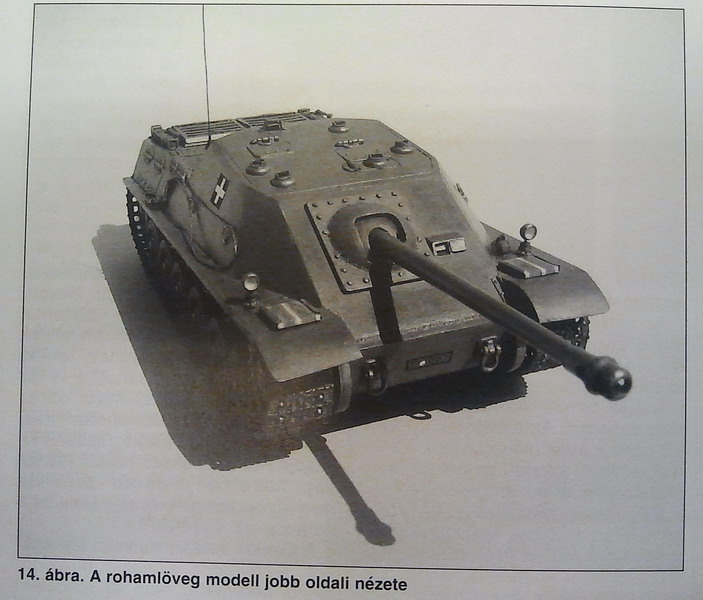 The history of the Hungarian Tas rohamlöveg (=Tas assault gun) which would have been based on the 44M. Tas medium tank, is a bit complicated. I have to say, that the common knowlege about it is full of half-truths and obsolete informations. Let me make it clear:

First of all: this vehicle has sometimes been referred as 44M. Árpád or simply just Árpád for no reason, so I have to state: this name is completely unhistorical, no historical source ever mentions this name, and most likely made up by somebody on the internet. It didn’t entered into service, so it haven’t got any separate name (like the Toldi, Turán, Nimród, Zrínyi, etc.), and it neighter got code number.

The first mention of this proposed assault gun project has been came up in the late 1970’s – early 1980’s, when Pál Korbuly, (son of János Korbuly, who was the the technical manager of the Tas development in the 1940’s) collected the fragmentary documentations, verbal informations and personal memoirs about the Tas project. As not much written document survived the war about the Tas, and not a single photograph of it was known at that time, he had to rely mostly on the memories of the original designers and workers he had spoken.

His discoveries highlighted the fact, that together 2 vehicles were under construction during the Tas development program in the Weisz Manfréd factory (WM) before the whole WM assembly hall, located on the Csepel Island (and together with it, every finished Tas component) were destroyed in an American bombing run in 27 July 1944.
He thought, that this could only mean that one prototype vehicle must be belonged to the Tas medium tank, and the other vehicle could be something else, like a secretly developed assault gun proposal. This would be obvious, if we take the analoge of the Hungarian Turán medium tank and the Zrínyi assault gun/howitzer developed on its chassis.

Before Pál Korbuly published his findings, he made cardboard mock-up versions of the Tas medium tank, and the Tas rohamlöveg assault gun, pictures here: 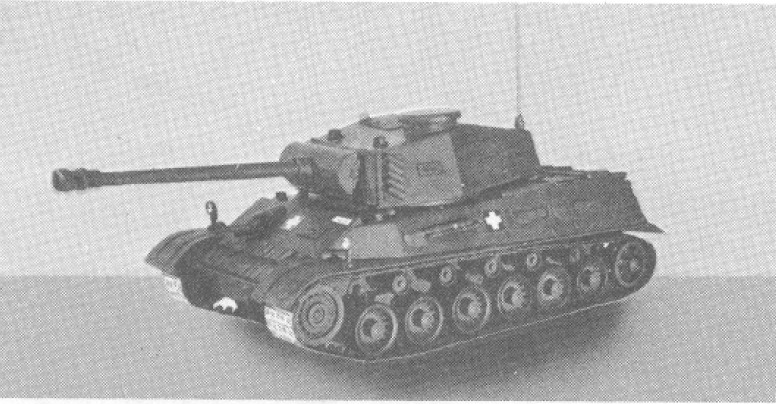 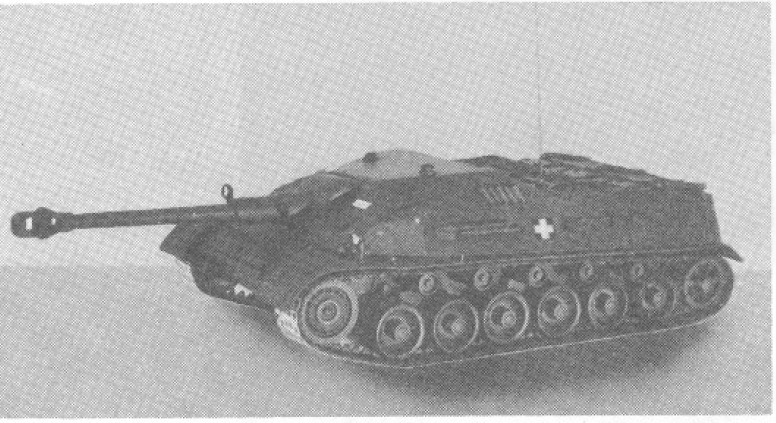 Above: The cardboard models of the Tas and the Tas rohamlöveg by Pál Korbuly. The Tas model became very outdated/unhistorical nowadays.

In an earlier post, which you can find here, I’ve described why the above mentioned model os the Tas medium tank is historically incorrect now.

Above: The outline drawing of the Tas rohamlöveg made by Iván Bajtos, based on Korbuly’s model

However, according to new discoveries, made in the recent years, it became clear that the above mentioned statement, that the prototype Tas rohamlöveg was under construction is FALSE. According to some documents, especially the order about the Tas-production, made by the Hungarian Ministry of Defence (HM), (it can be found in the Hungarian National Archives where Pál Korbuly didn’t or couldn’t go during his research), it became clear that the HM ordered 2, one „iron”, and one „finished” (made of armour-plates) prototypes of the Tas. There are no mentions about any planned assault gun in it, so both prototypes, and all manufactured Tas components or parts belonged to the Tas medium tank itself, and there’s no Tas rohamlöveg prototype (or parts of it) have been ever assembled. Actually, there are no known, official document ever mentions that this assault gun ever existed, except some shady statements and memories.

Nevertheless, this doesn’t mean that the Hungarian engineers did not considered to create an assault gun or tank destroyer based on the Tas medium tank. I mean, it’s more than likely that Korbuly make his conclusion based on one of his non-official (vocal maybe) source. However, because there are no (known) official document states, that the Tas rohamlöveg existed, most of the newest historical books about the Hungarian tanks do not deal with the „legend” of the Tas rohamlöveg, they only states that it could in a very, very early development stage, or it doesn’t existed at all.

In 2009, Ádám Bíró, acknowledged Hungarian historian and model-maker wrote a long article about how could(!) have the Tas rohamlöveg looked like, based on his mock-up experiments. The pictures on the bottom of the post are mostly from his article. However, any of the existing mock-ups or models could not be considered 100% historically correct right now.

He used the 7,5 cm KwK 42 L/70 tank gun for his Tas rohamlöveg proposal, because it is not clearly known what gun was considered for this vehicle, and in his opinion, this would have been the most likely choice.
It is clear, that only four guns was avaiable that time to choose from;

Eighter, and in the same time, non of these could have been used for the Tas rohamlöveg development. Because IRL the Germans were unwilling to sell the licence of their high performance anti-tank guns (the Hungarian industry didn’t had the resources to manufacture them anyway) and they could not affort to sell manufactured 88mm guns to the Hungarians, because the Germans could not even satisfy their own needs of these guns.

The the mass production of the Hungarian 80mm gun was postponed to 1945, and only two 43.M 75mm gun was ever assembled. One was used for the Zrínyi I assault gun prototype, and the other for the Turán III medium tank prototype.

If the Tas rohamlöveg would have been ever finished, it would most likely used the same engine as the 44M. Tas: two, joint operated WM V-8H (same as the engine of the Turán). However, there were (very early) plans to create a Hungarian V-shaped, 12 cylinder, at least 700hp engine for the Tas, so the Tas rohamlöveg could get it too, along with the Panther’s Maybach engine, which was considered for some time too.

Because it’s not much known about this assault gun, most of the stats of the Tas rohamlöveg differs from source to source.

Engines: Same as the Tas

Even though this would be the least historical Hungarian tank in the World of Tanks, I see no reason why not to implement this considered variant of the Tas medium tank. We can play with plenty, maybe even less historical tanks, tank destroyers and artilleries in this game. Ok, I know, this doesn’t justify the implementation, but hell, this TD would be awesome.

As it is not known how the Tas rohamlöveg exacly looked like, eighter Korbuly’s or Bíró’s mock-up could be used as a role model for the game designers. However, I think Bíró’s mock-up is a little bit better (more realistic), because he gave reasons in his article, why he made his model as he did so (for example: he made enough space for the crew; in Korbuly’s model, the gun would have nearly zero gun derpession, etc).

Pictures (based on Á.Bíró’s research) 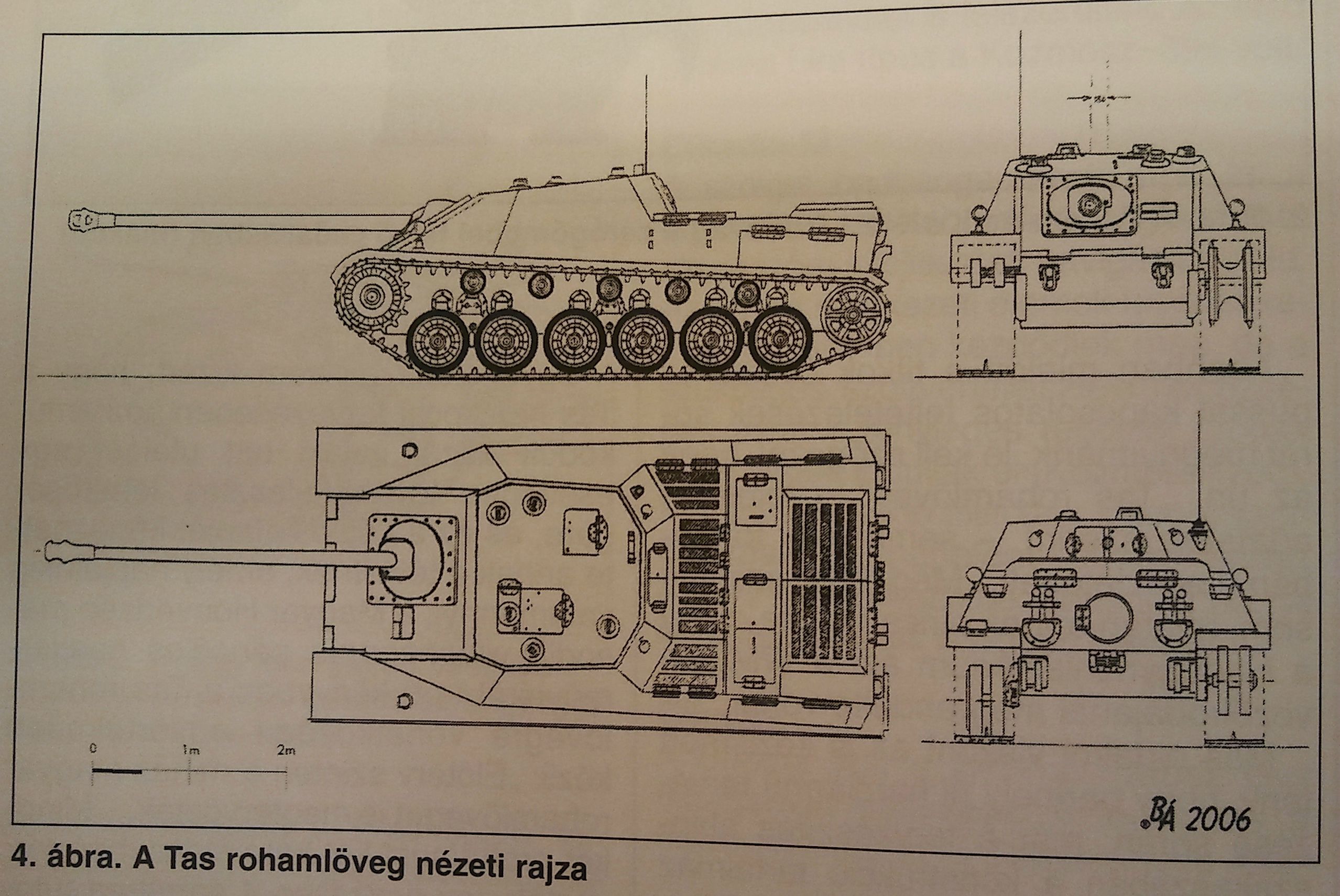 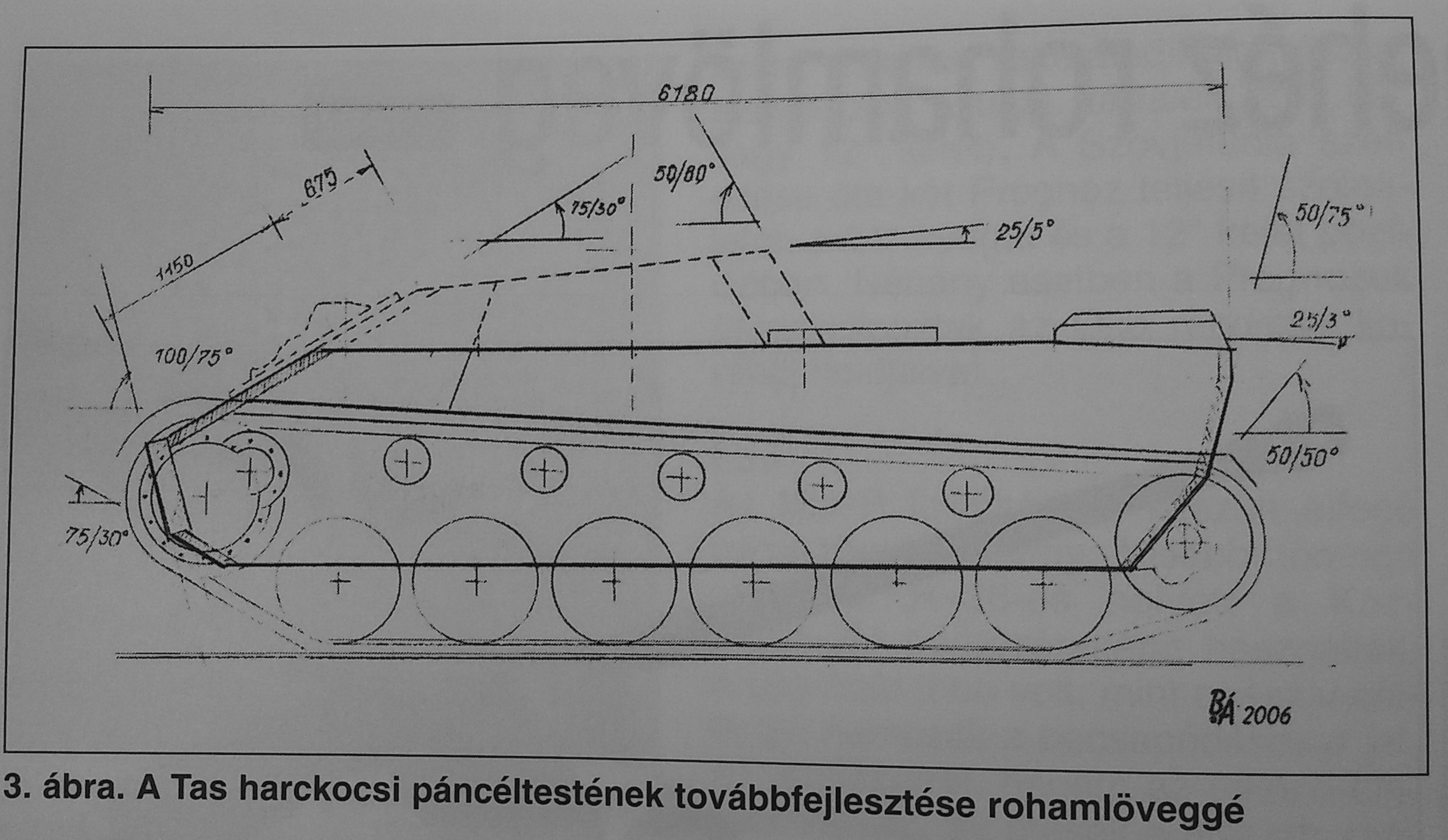 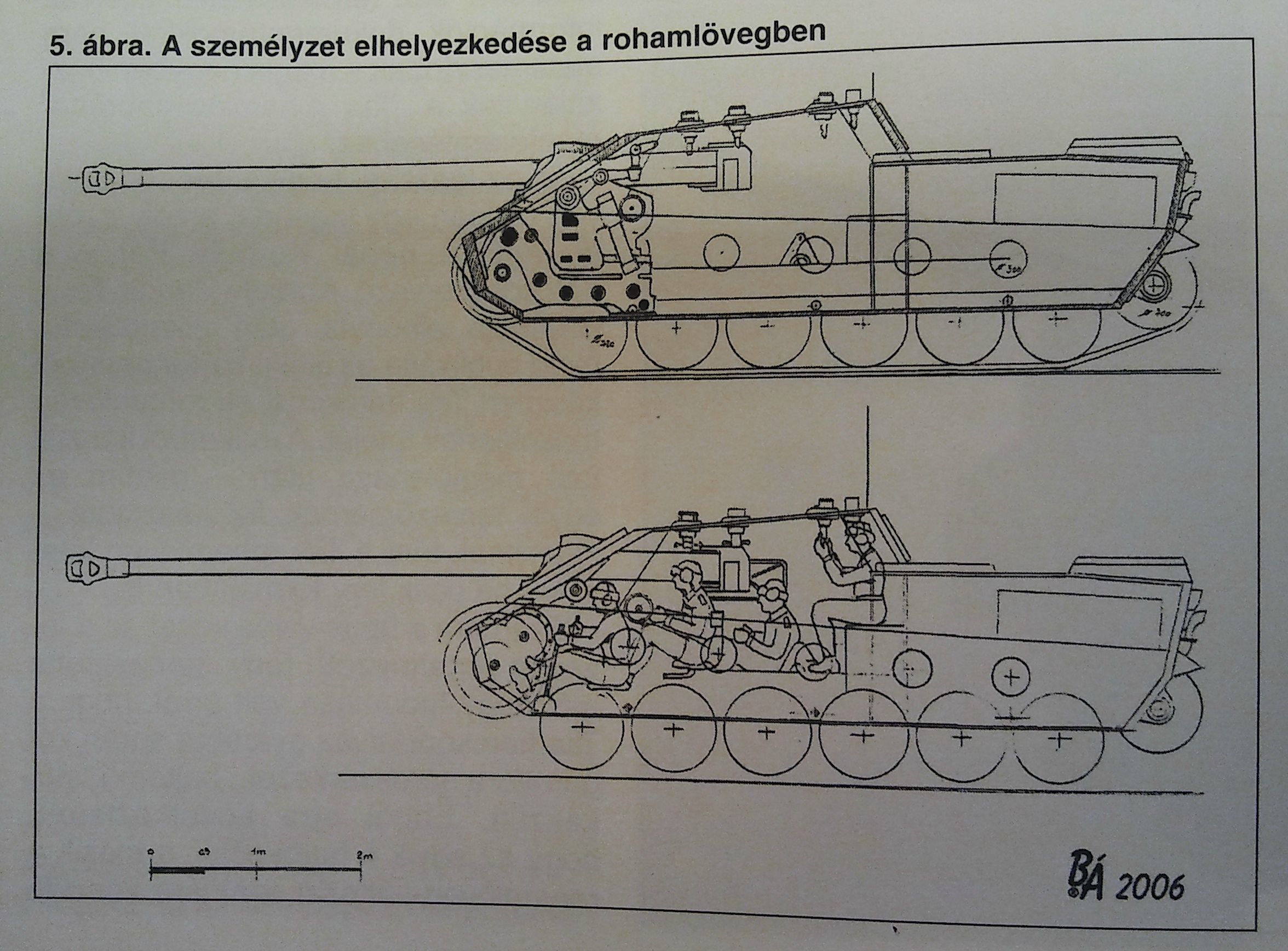 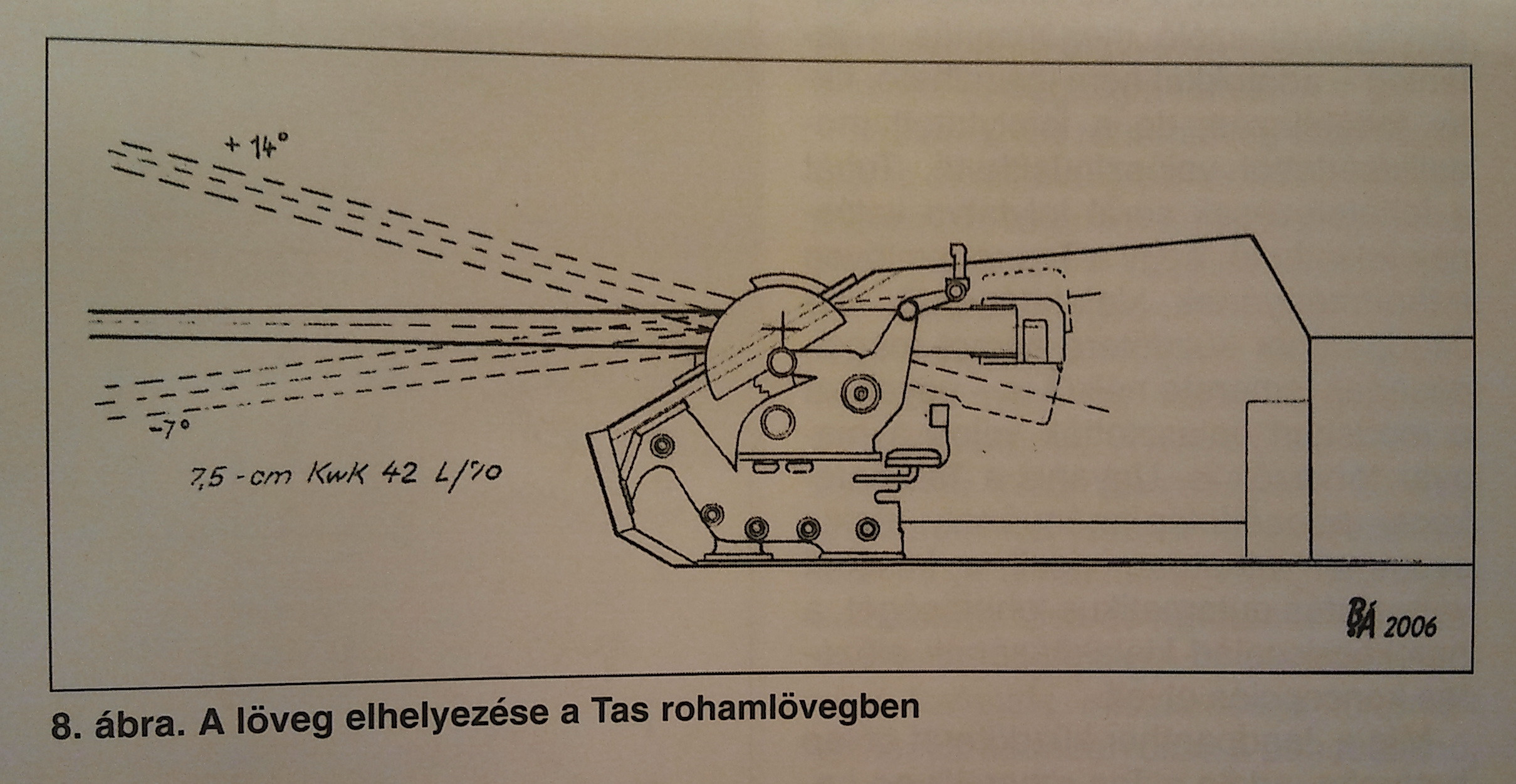 21 thoughts on “Tas Rohamlöveg in Detail”