Warning – this post contains stronk klanu drama, if you are not interested in such things and came here only for the news, this is not a good post for you.

Normally I am above such stuff, but this is just too funny not to post.

You will probably remember the Bad Apples post where I exposed an asshole from the clan EFE. So, what do you think happened as a followup? What I expected was something like the case of the Absolut Pansar clan, where the leadership apologized publicly for their misbehaving member and that member was punished (kicked even I think).

But you know how EFE is.

What I got was an angry rant and backslash about me being “not objective” (because, you know, getting teamdamaged or teamkilled or whatever totally justifies wishing someone cancer, Hitler killing your nation or Gestapo raping your family). EFE was angry because it’s like totally clear there are no more bad people in the EFE clan, right?

Anyway, as I said, EFE didn’t take any criticism well and instead of apologizing for their rude member, they produced some fantastic insults and comments, that kept me laughing for the most of the evening. I hereby apologize to the R1SE clan for fuelling the EFE rage in their recruit thread, but this lolcow was just too tempting not to milk. Yea, I know, I am a terrible person.

Either way, today, EFE swore a mighty oath of vengeance to punish the clan R1SE I am a member of! Behold the unyielding fury of their wrath!

Very mature (let alone the fact that I barely play nowadays at all, I don’t play CW and the clan has practically nothing to do with me). And this guy is not just a random nobody like the Matt1 idiot from the last post, this is a deputy commander of the clan. All potential recruits should probably consider, whether they REALLY want to serve under such a guy. He’s just epic, I must admit that ever since the great rages of Stauffen, I haven’t seen anything like it.

He also called me racist, communist, Hitler, dictator etc etc etc. – standard stuff (which unfortunately/fortunately got moderated already). And all that, instead of just saying “sorry, Matt1 is an idiot, we’ll take away his DKP or something”. In the end, he issued a large statement – gonna repost it here: 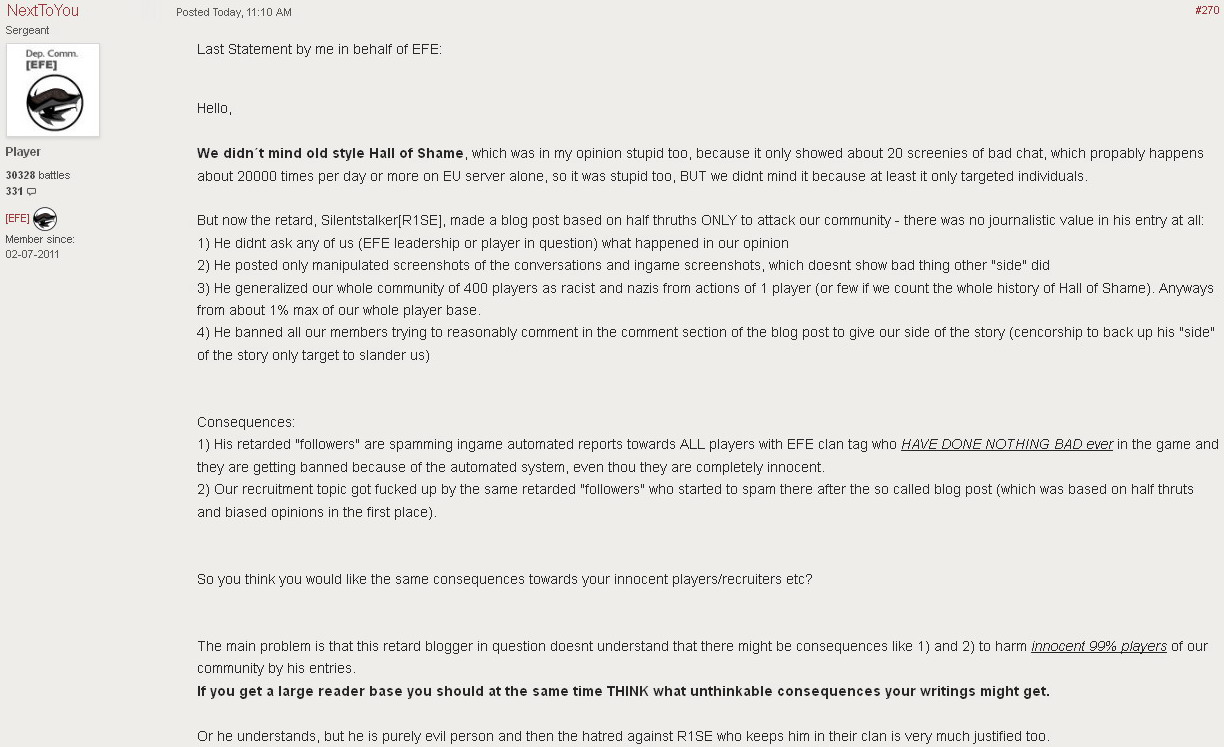 I don’t even know where to start with starting describing what is wrong with that message. For some reason, SOME people think that it’s just fine to invoke Hitler, cancer and rape just because you are an unicum. That your stats make you privileged. They do not – all that purple number proves is that you are a good in a videogame, while such insults can have very real consequences, both emotional to some people (not me, but I can very well imagine how someone who for example lost someone to real cancer would react), or – in worst case – even legal (there was a case when threats on Russian WoT forum did not only lead to that person being IP-banned, but Russian police was also notified and they started an investigation).

Furthermore, this guy wants me to judge his clan not by actions of its members, but he holds the clan I am in, R1SE, accountable for my actions? What a clown. That part with innocent people being banned because of me is obviously a nonsense as well (I have a bit of insight into the report system, this is not how it works – reports don’t get anyone banned automatically, they only raise flags – either it’s a lie, or these people were not as innocent as he claims).

I am saying this openly, so there is absolutely no misunderstanding: for me, clan EFE represents the absolute worst of the EU server. Entitlement, antisemitism, racism, extremely rude comments, everything in one package. Make no mistake – they are not the only clan with such attitude, but in my personal opinion, EFE is one of the worst. With that being said, yes – raging/vulgar EFE clan members will be/were banned from FTR.

With this post the EFE topic is closed for me. I did let you know what I think about them – you might disagree, you might agree, up to you.

PS: EFE recruiting thread is a source of hilarity as well, a very good insight into the EFE mindset

PPS: thanks to JPL for a very fitting picture – I gotta share that! 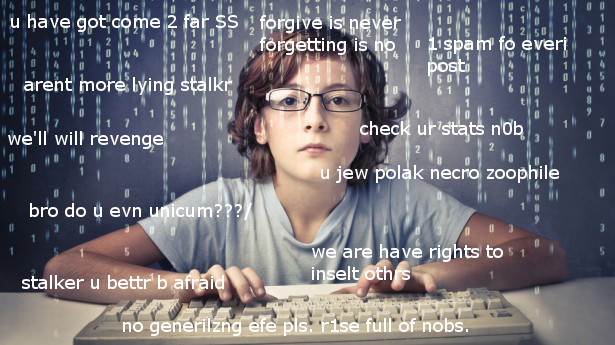 PPPS: Comments closed. I think it was enough fun for one day… :)

357 thoughts on “EFE Swears Vengeance – FTR About to Get Spammed!”