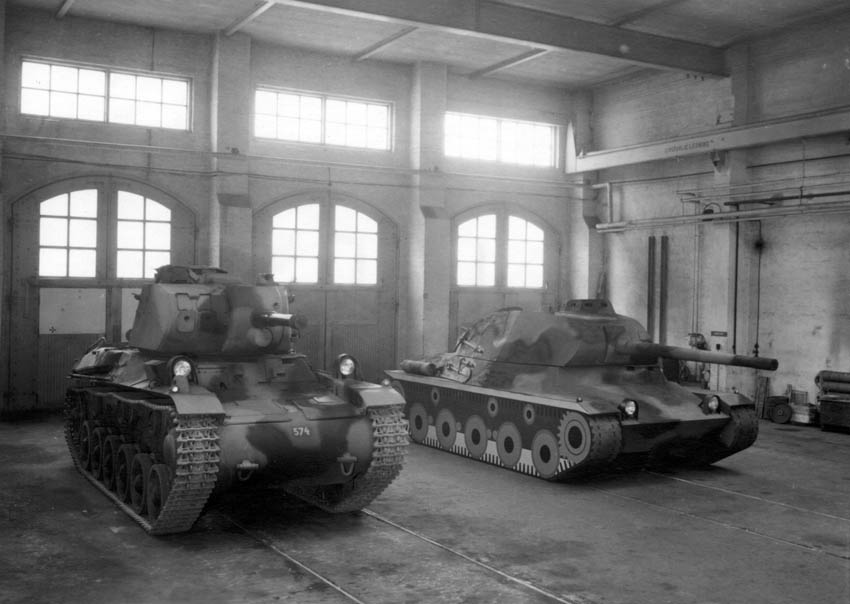 Our story begins in 1949, when discussions first began regarding the new Swedish tank, following the 1947 cancellation of the previous tank project. It was concluded that the new tank would be a 20-ton vehicle, mainly intended for infantry support and armed with a 75mm gun. The new project was based on the idea that large numbers of tanks have to be able to take losses, which in a country with limited resources means that armor needs to be sacrificed. It was thought that the protection of the vehicle could not be increased to a relevant degree without too high a cost per vehicle. Another idea was that Sweden did not have the resources or infrastructure for heavy vehicles and while there may have been some truth behind these ideas at the time, the times were changing and Swedish infrastructure and resources were rapidly improving as Sweden helped rebuild Europe after WW2.

Meanwhile at Landsverk, a series of mainly light tanks was in development for the export market after WW2. One of these projects first offered in 1948 was the Strv Lansen (Lance), a 19 ton light tank with 35mm of armor and a long 75mm gun. The vehicle was basically a smaller version of the Strv Leo, sharing its general shape and gun, while having lighter armor and better mobility. There was an even lighter version of the tank called Strv Pilen (Arrow) we well, which weighed 17 tons and shared its short 75mm gun with the Strv m/42. In 1949, the Swedish military suddenly became interested in Strv Lansen and it would later become Landsverk’s proposal for the 20 ton tank project. 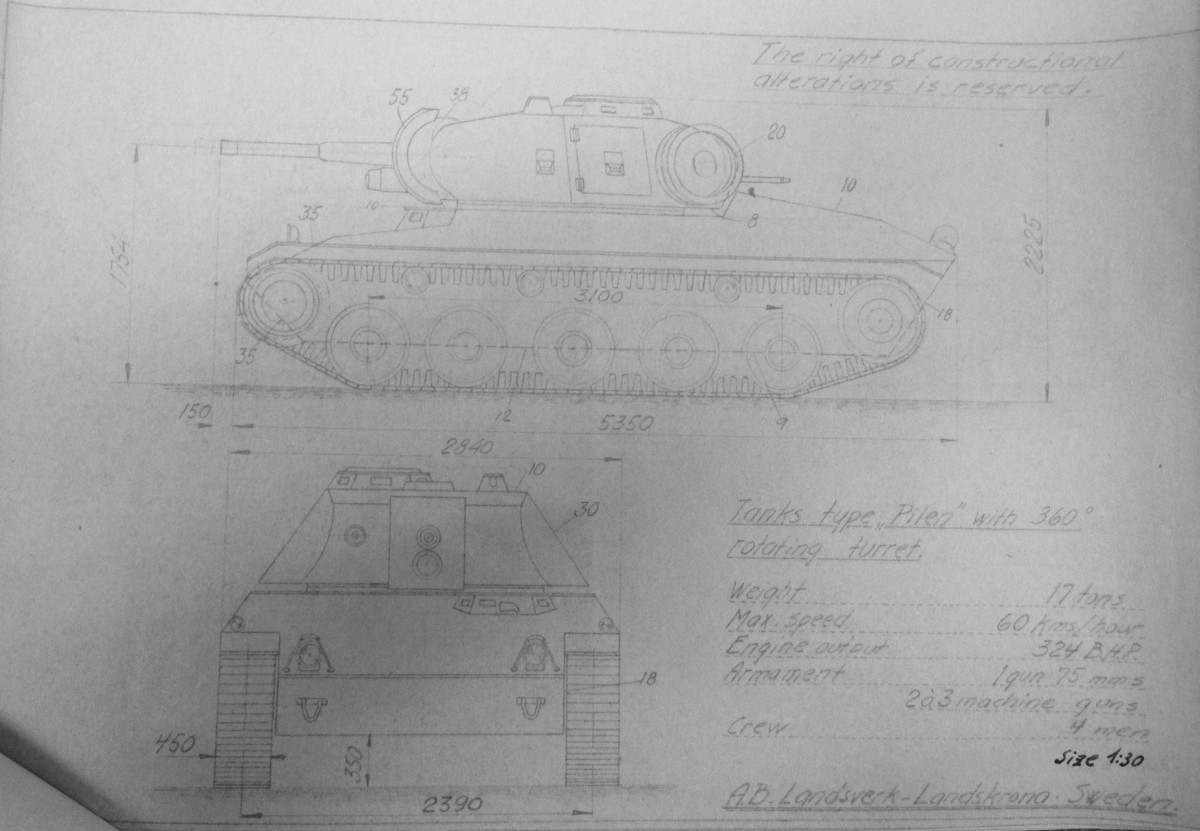 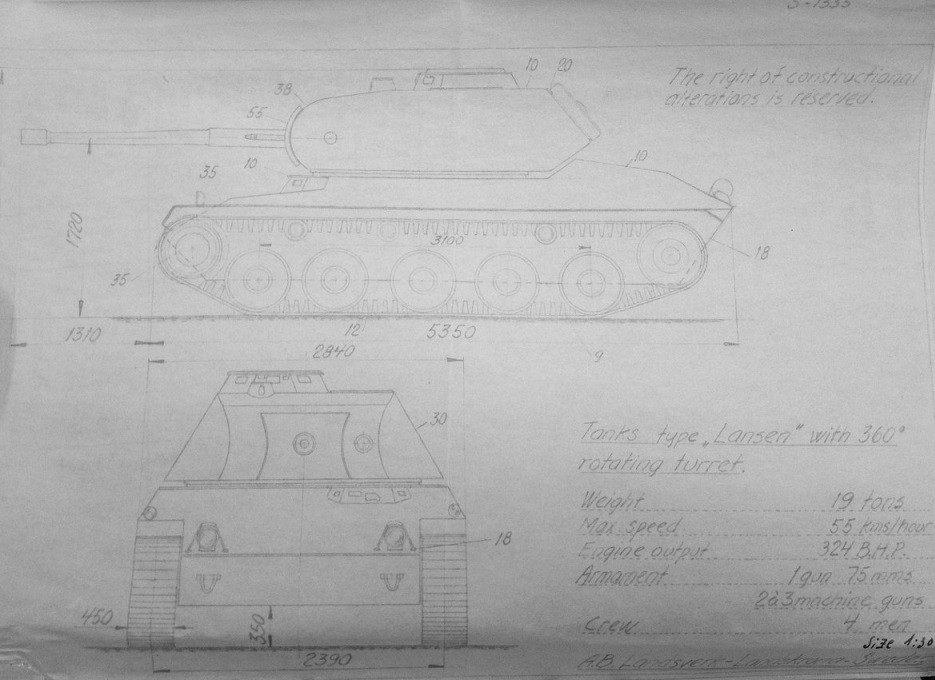 In battle, the tank was to be able to engage three main types of targets. The first were other tanks and AFV´s. The second type was infantry and the third type of target was anti-tank guns. It was actually considered to only equip the tank with something like a 75mm or 105mm howitzer, that would not have been able to fight other tanks from the frontal angle and have the tank mainly support infantry, while the anti-tank capability would be handled almost exclusively by tank destroyers. What happened instead was that the idea of a cheap poorly armored vehicle for infantry support would develop into a separate turretless vehicle, which would result in the Ikv series of assault guns.

As the discussions continued, it was decided that the 20 ton tank would be a part of either a heavy or a light vehicle group. Plans were made for a self-propelled anti-aircraft gun and it was decided that the tank could be based on it, with maximum weight of 15 tons. The other option was to keep the weight in the 20 ton range and have the vehicle share parts with the projected 30 ton SPG or the 25-30 ton TD project, which had reappeared. What this meant was that things such as road-wheels and tracks, as well as transmissions and engines, could be standardized between these vehicles.

Several new engine options were considered for the new vehicles, amongst these were a 430-450hp modification of the Volvo A8B engine or a rebuilt version of the same engine to 12 cylinders, called A12B with 640hp. These engines were considered only for the vehicles in the heavier weight class. There was also a new air-cooled V12 and a 220hp engine planned for the lighter vehicles – or in a dual mount for the heavier ones. 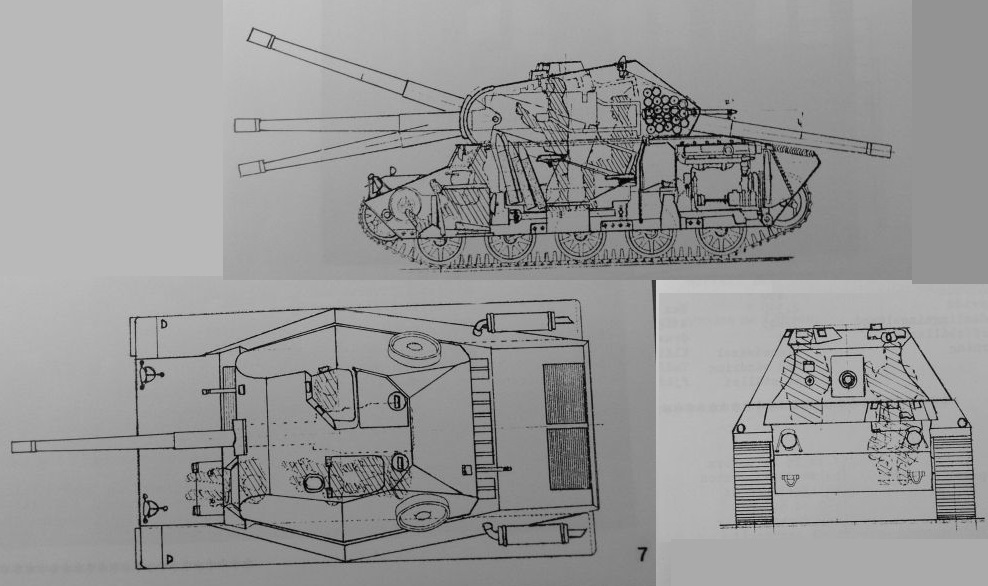 After a calculation of the possible armor for the tank within the two weight limits, it was decided that “the upper weight limit of 20 tons is to be fully utilized” and that the vehicle should have frontal protection against 57mm guns, to allow for greater durability in combat and to force the enemy to bring guns bigger than conventional 20-37mm. It was also pointed out that the chassis could be shared with the 30 ton SPG, which would be able to handle the possible weight increase.

In 1950, it was realized that the current 75mm gun was no longer enough and that the tank should carry a gun of 10,5cm caliber. After some discussion regarding the gun’s muzzle velocity, it was decided that the 10,5cm gun should have a muzzle velocity of 600m/s with the capability of firing a sub-caliber shell at 870m/s. Studies were also made regarding what’s possible in terms of tank armament within the 35 ton weight limit. Some ideas, like 75mm autoloaders, were discussed, but they seem not to be directly related to the 20 ton tank.

It was also in 1950, when the military command began to have doubts about the capabilities of a 20 ton light tank on modern battlefield. Some even wanted a 45-50 ton tank, but it was quickly pointed out that Sweden couldn’t afford to produce such a heavy tank in large numbers and that other reasons would prevent the adoption of such a heavy vehicle anyhow. It was also noted that a vehicle as light as 20 tons could only really effectively be used when facing enemy light tanks and that the tank would be outclassed by heavier tanks.

The development of the 20 ton tank continued and some interesting ideas emerge. One document mentions that the combination of the tank and anti-tank roles are now possible within reasonable weight. What followed was a proposal for a vehicle armed with the 10,5cm L/50 Lvkan m/42 anti-aircraft gun, based on the 30 ton SPG chassis. The vehicle was to have frontal armor of 150mm, 25mm side and 20mm rear armor. The weight of the vehicle was estimated at 34 tons, but this remained just an idea in 1950.

In late 1950, it was decided to increase the weight of the light tank to 25 tons. The new weight limit allowed the armor to increase to (60/25/52) and the mounting of a more powerful 10,5cm tank gun. Studies were also made for even heavier frontal armor of 100mm, with only 12mm for side and rear, but this alternative was not preferred. This represented the final evolution of the 20 ton tank concept and sometime after the final requirements were made, Landsverk produced another mockup of the Lansen with the 10,5cm gun. 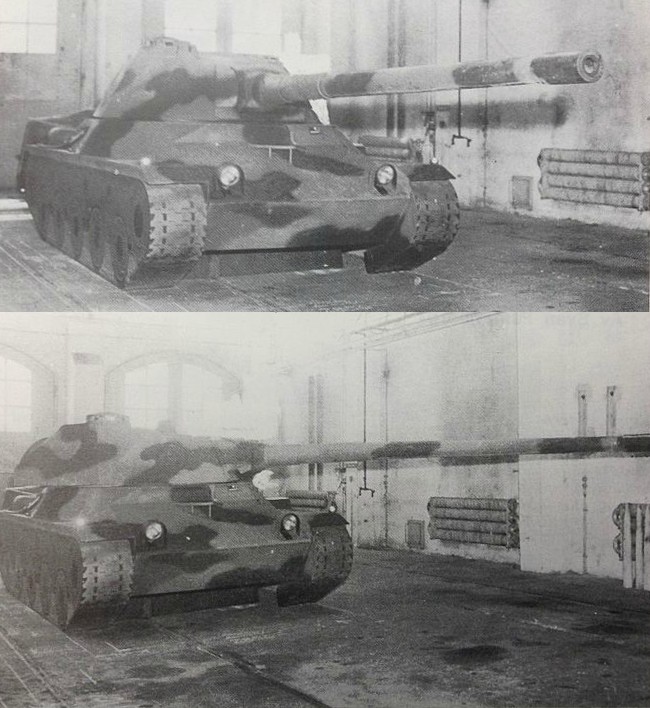 The development of the 20 ton light tank covers several vehicles, that could work really well for a swedish light tank line. First is the Strv Pilen, which is my candidate for a tier 6 light tank, it should perform somewhat like the current Chaffee, but with a bigger selection of guns, ranging from 57 to 75mm. For tier 7, I would nominate the Lansen, which would carry a 75mm gun or a short 105mm and my tier 8 Swedish light tank would be the 25 ton Lansen, in the game this tank would have somewhat lackluster mobility for a light tank with 25,5hp/t and a 640hp engine, but it would get a massive 10,5cm gun capable of 190mm of penetration. One thing to note is that the alpha of the gun would obviously have to be lower than other 10,5cm with probably around 300 damage. This would make the gun very comparable to the 10cm on the Chinese WZ-132.