if you follow FTR for a while, you might remember that at one point, there was a piece of information leaked about the new Stronkhold mode having bot-controlled turrets as defensive buildings. As I wrote before, the use of tank turrets as bunkers is not a complete Wargaming invention – and today, we’re going to have a look at one specific installation, the Panther Ostwallturm mount.

Panther turrets were converted into bunkers ever since late 1943. Some were serial Panther tank turrets, but most were specifically modified for the role of a bunker turret. The commander’s copula was replaced by a hatch and the roof of the turret was reinforced to 40mm (earlier 16mm) to prevent the turret from being knocked out easily by artillery fire. According to German specifications, the roof was supposed to withstand the impact of HE shells up to 150mm.

The first batch of 112 turret parts sets was made by Dortmund Hoerder Hüttenverein and it was finished by February 1944. Second batch of 155 turret parts sets was produced by Ruhrstahl and the production run finished in August 1944. The final assembly took place at Demag-Falkansee, producing 98 assembled Panther Ostwallturm sets until May 1944 with the production going on from that point with the speed of 15 turrets per month.

There were two foundations used for the turret – a steel welded box called Pantherturm I (Stahluntersatz) and a massive concrete foundation called Pantherturm III (Betonsockel). Additionally, there was also a third plan from 1944 to put the Pather turret on a wooden bunker. The turret itself consisted of two parts – the upper part (960mm tall) equalled roughly the combat compartment of a tank. The turret was mounted on a roof, that was 100mm thick. The sides were 80mm thick and the ammunition was stored around the turret basket. This upper box was assembled by Krauss-Maffei in Munich. The lower part of the box was a crew compartment with heating and an electrical generator, powered by a DKW engine. It had a large door (protected by a trench/tunnel) and there was also a small escape hatch. The sides were 70mm thick and the floor was 40mm thick – the crew compartment box did not have a roof, it was covered by the combat compartment box. 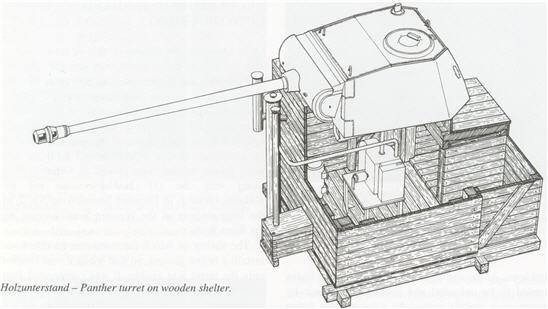 Until 26.3.1945, 268 Panther turret sets were built and despite the set’s name (“East wall”), majority of them was used on the western front (Westwall and Atlantic Wall) and in Italy, several dozen were used in the East as well. The last ones were used during the battle of Berlin. These turrets were a very effective weapon – they were small, hard to spot and very tough (they were resistant to Allied 6pdr and 75mm guns). Of course, in the end, it was just a bunker and it was possible to flank it and destroy it by firing in its side armor. 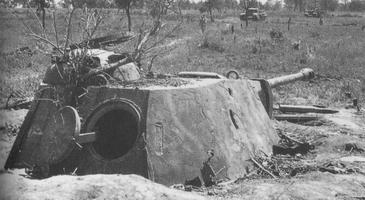