So Part 1 had some silly and not so silly French designs, France has more to come but there were requests for some British ones. So here they are: 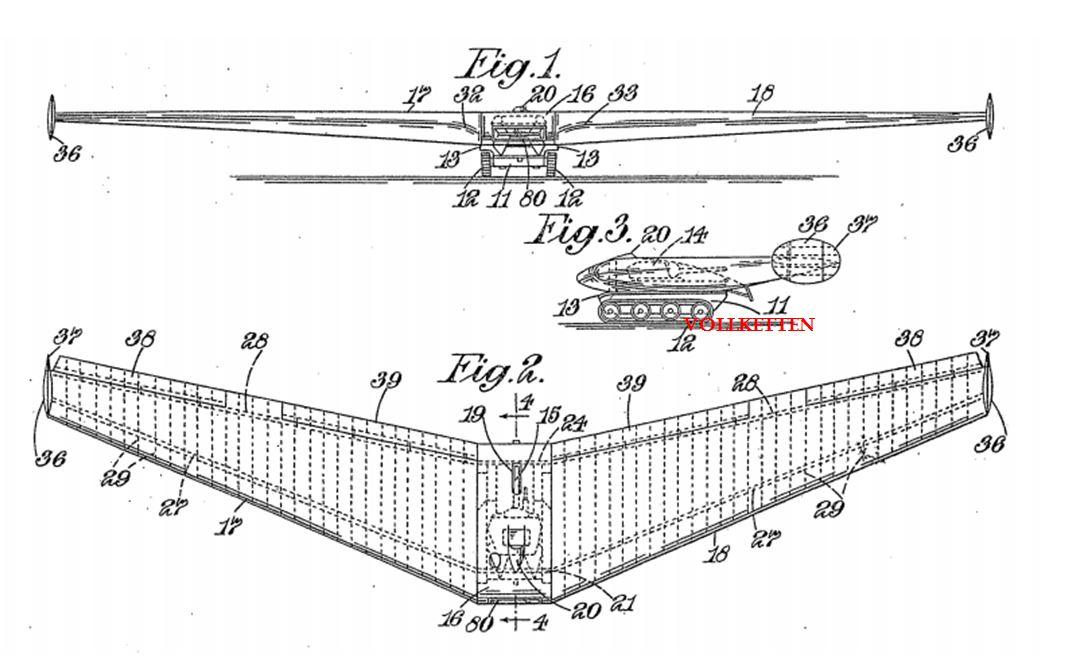 Yay, a flying tank, why not? Leslie Baynes and Alan Muntz and Company from Middlesex drew up this design in July 1943 for the rapid transport of armour to the front. This is an actual tank though, the Harry Hopkins with the distinctive hull shape and who knows: with this design, maybe we can have some stock modules for the Harry Hopkins now (SS: Harry Hopkins LT has a problem with modules in WoT). So maybe not so useless after-all.

“But wait Vollky I thought this was going to be silly tanks….” Have no fear; England shall provide.

It’s 1944 and we have lots of old ‘Bren Gun Carriers’ – what’s better than to make very costly and complicated changes to them, fit more frontal armour and a folding roof, so the troops can lay down to fire small arms at those pesky Germans?

Yes, it’s the good old carrier, re-thought by Isabel Smeaton and a Polish man called Stanislaw Sochaczewski in late 1944. But who knows, one day when we get some Polish content, maybe with a small gun this could even make it to the game. Alright alright, those are far too sensible, lets lower the standards a little.

It’s 1940, Britain needs mobile armour for home defence, why not armour the tractors? In June 1940, the Aldersley Engineering Company of Wolverhampton decides that what Britain needs is a slow underpowered tractor fitted with crude armour plating and no gun for one man crew to use. Better known as ‘Operation Target Practice’. I think even the Home Guard in those desperate times was glad not to have this.

Second tractor-tank here is from John Beavan from Ayrshire from September 1940, but it’s not just an armoured tractor like the other, no, this is an amphibious armoured tractor, which with its high centre of gravity would most likely simply roll over in the water. No weapon is specified for the hapless single crew member, condemned to death using this.

So, that was an unarmed tractor, we need some armament. What better way of bringing this armament to the front than fitted to an 8 wheel drive armoured car? How this vehicles was to steer adequately I don’t really understand, but I’m sure the designer Stanley Opperman had thought of it back in 1942. Strange as it looks, I wish this had been built – if anything, we could see how the incredibly complicated drive mechanism had to be serviced.

Now, in 1916, John Oxley of Newcastle (a man, who designed several armour plated things around that time) decided to create this armoured plated vehicle based on three spherical triangularly arranged wheels, which is reasonable, considering some of the stranger armoured cars of the era. I however have to wonder, how such a talented engineer figured out that this tiny propeller was really necessary or sufficient for the design. Although I have to admit that those wheels look good.

Frederick Cunard of Liverpool designed this ‘Mobile Redoubt’ beast in 1919 with specific importance placed on making the centre of gravity in the middle of the vehicle and the giant central drive wheel, quite where the fighting space was to be isn’t clear.

Looking like some Victorian idea for an armoured paddle steamer, this oddity comes from July 1940 by Geoffrey Gibbs and Thomas Tusting, who designed this “effective and easily manipulated armoured vehicle”, although clearly the fun of changing parts for one of the 4 inner vehicle tracks was lost on both of them. It’s a good job that the miniscule propeller is supplemented by the tracks for propelling itself in the water too, because otherwise this design would just be unworkable. 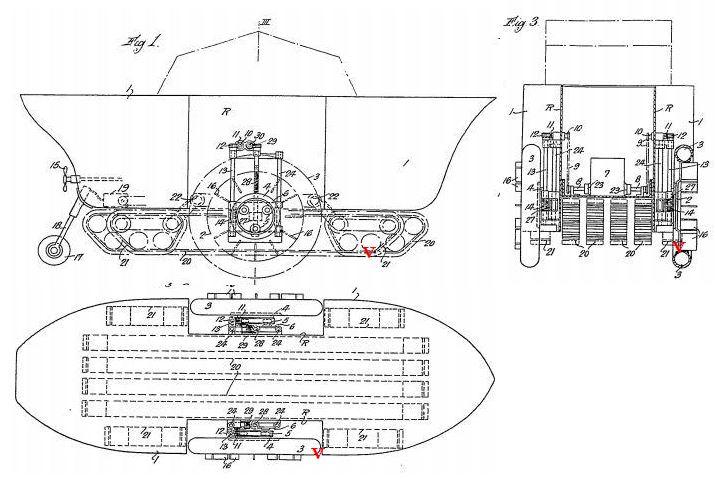 They say to save the best for last and even in 1916, this one was quite obviously silly. Percy Atherton of London, working in Punjab, decided that this was the answer to modern warfare. A giant (and I do mean ‘GIANT’) steam-powered wheeled land battleship with wheels 300 feet in diameter, thus enabling it to cross trenches up to 50 feet wide and to “cross the English channel with its maximum depth of 120 feet” – and that even allowing for 30 feet of sinkage into the sea bed would only reach the axles. Of course such sinkage isn’t too hard to imagine in the land either, given the specified weight of mere 2700 long tons, spread across the “several floors” of the superstructure. A variant he suggested without a drawing (shame) was just for a pair of wheels with a trailing section like the Tsar wheel design.

The archives have more to offer for Britain but that’s enough for now. What nation would you like to see next?