In this part, we’ll take a look at how could the Hungarian Tas rohamlöveg tank destroyer be implemented into WoT. Everything is the same as in the previous articles: I will try not to predict game parameters (health points or alpha damage) and the balance parameters (radiorange, RoF, etc.) would not necessarely be implemented as I listed them below.

However, the implementation of this TD into the game is a bit difficult. You’ll see why.

Please note that these below are only the historical/logical characteristics, the potentially implemented tanks could get unhistorical stuff as last resort, if the game balance requires it. 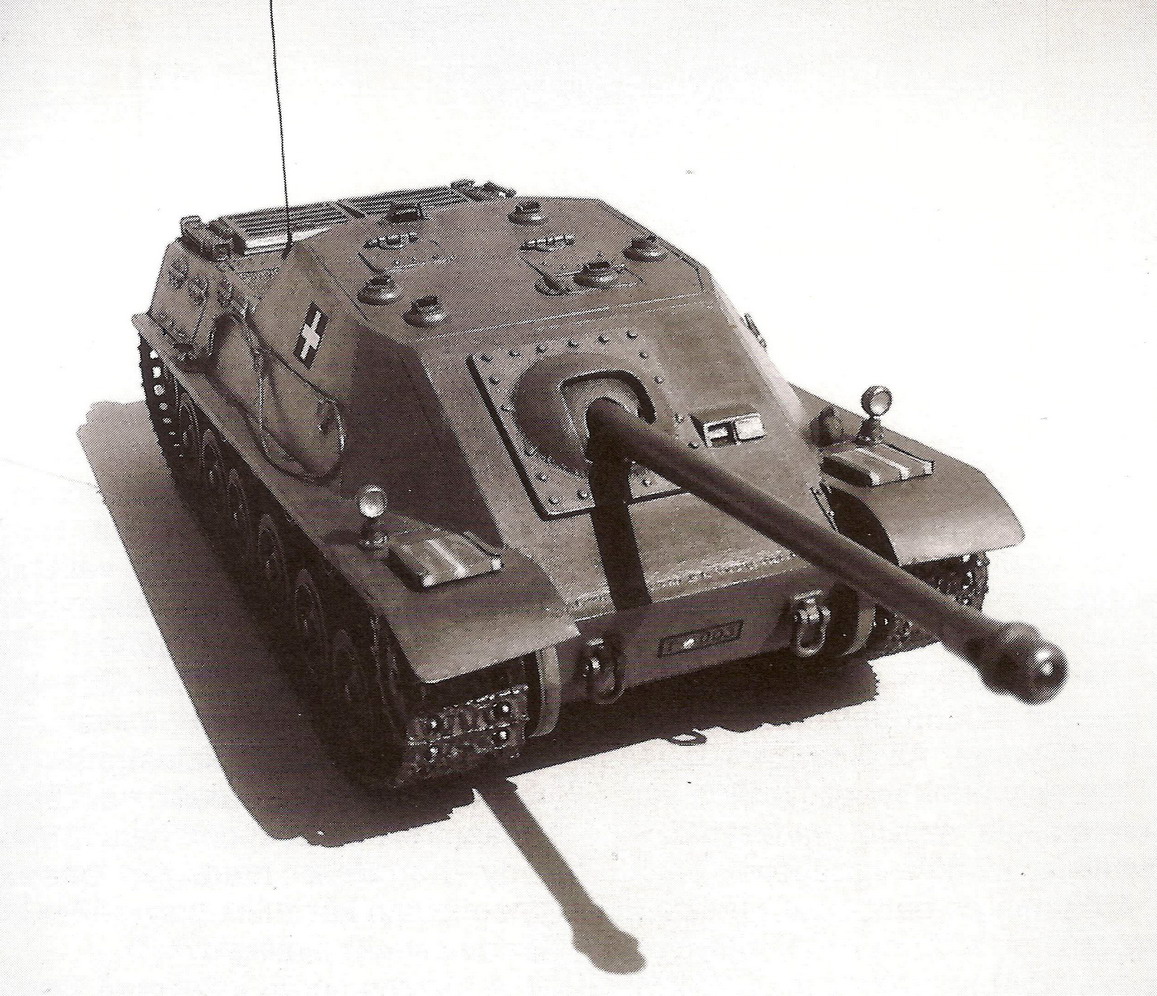 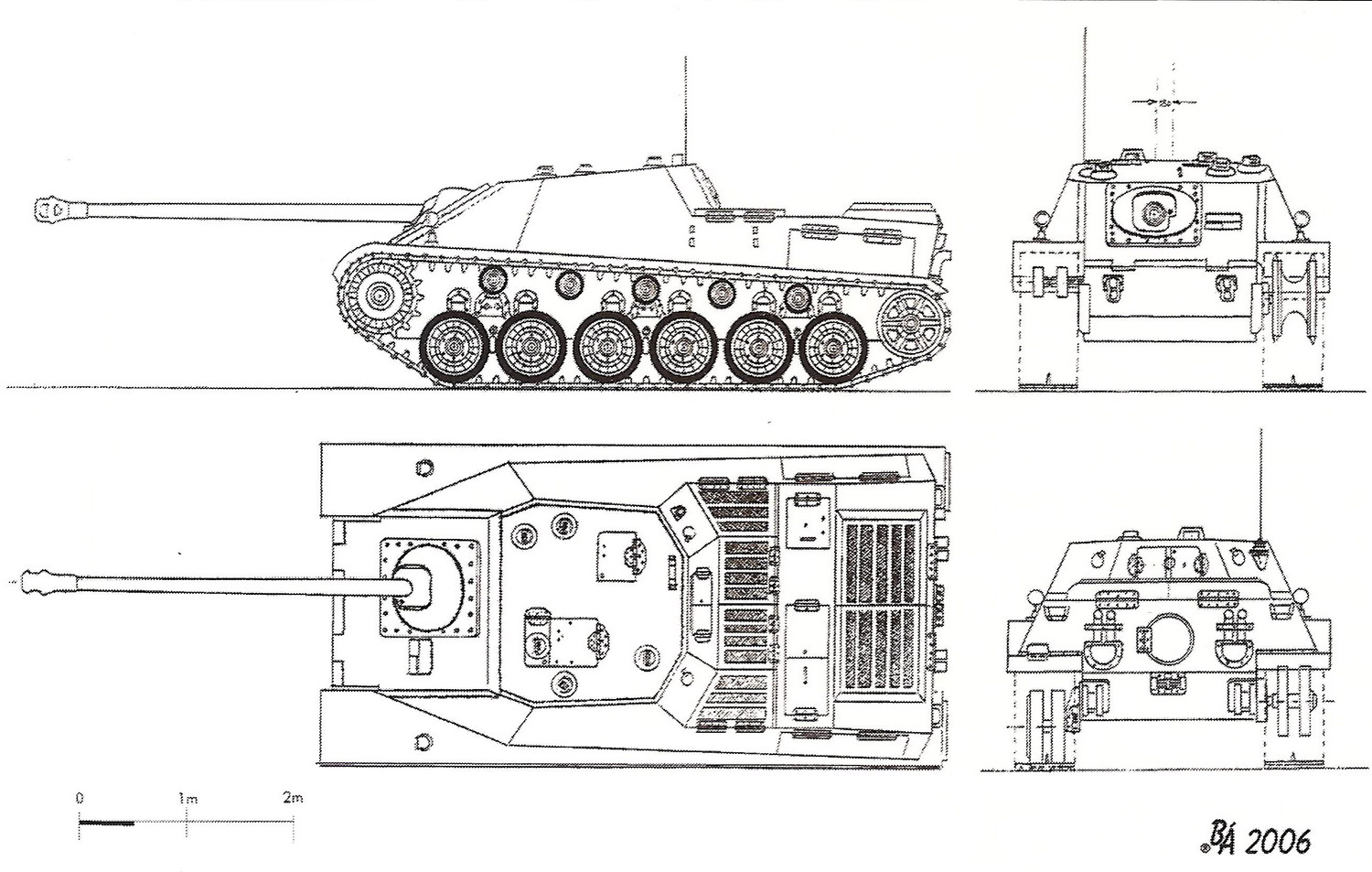 Above: A possible way, how could the Tas TD could have been looked like.

Possible vehicle description
Considered assault gun version of the 44M. Tas. However, the development was never started, and no prototypes were made.

There’s literally nothing known about the shape of the superstructure of the Tas TD. There are two main hypotheses on how the Tas rohamlöveg could have looked like (neither of them can be justified by historical sources), namely these two:

Above: Drawing by I. Bajtos based on the (outdated and unhistorical) mock-up by J. Korbuly. There’s no way that gun could have had any gun depression, this model is just too impractical and useless in “reality”. Although, those Obj. 704-like hull angles are sexy as hell.

Above: Mock-up by Á. Bíró. This drawing is based on mock-up experiments, it’s ergonomic and practical, but this is just a Jagdpanther on a different chassis. It’s just… boring.
I think Wargaming should combine these two ideas, and create their own Tas TD model the way they should want it: practical and sexy. Especially if they implement it as a premium TD, good looks would help to sell the vehicle.

It’s not sure which gun would have been used on this TD if it ever was created, so I listed the ones, that would be even available or could be logical or mentioned by articles/books on this topic. We can not be sure which would be put in the game, it’s up to Wargaming developers to decide, but I guess they’ll stick with the best possible lineup, such as the long 8,8cm.

It’s possible that the developers will not put this TD to the researchable branch and they’ll use it as a high tier premium tank destroyer instead because of the hole at tier 6 and because high tier premiums for the Hungarian branch (which would not get any premium tank above tier 5 otherwise) are always welcomed.

About the in-game tier:
Depending on its soft stats, modules and selected gun, Tas rohamlöveg could be implemented as a tier 6, or tier 7, or maybe as a tier 8 tank destroyer. It’s up to WG to decide, but in my opinion the tier 7 role is the best option.

At tier 6 it would not get the long 8,8cm cannon and a 700 hp engine, and became a fairly well armored, but not too mobile TD.

Another option is to split the Tas rohamlöveg too, just like the Tas medium tank, to fill the gap at tier 6, but this would be very unhistorical solution, I do not recommend it, because it can not be “justified” like my separation of the Tas medium tank – as one would get the historically available modules and the other the unavailable, but planned ones.

At tier 7, it’s pretty straightforward. It would behave similarly as the in-game Jagdpanther, equipped with its 88mm L/71 cannon.

The tier 8 role is a bit problematic too, as the strongest, highest caliber gun which would be even logical on the Tas TD is the 8,8cm KwK/Pak 43 L/71, and that gun would need insanely low reload time / high RoF to compensate the lack of alpha damage, and mediocre armor of the Tas TD.
The other problem is the relatively low penetration of that gun, which would be problematic if the tier 8 Tas TD faced tier 10 tanks in random battles. These problems could be only solved with relatively bad solutions:

- the above mentioned, overbuffed gun performance, with insane RoF
- overbuffed mobility and gun performance, so the Tas Rohamlöveg would be something like the E-25 of tier 8
- overbuffed, unhistorical armor (really bad idea)
- overbuffed camo, so the result would be something like the SU-101, with worse armor, but better gun depression
- more powerful guns, very unhistorical
- limited MM like on the tier 8 premium Jagdtiger 88, but this is also a bad idea for a researchable tank, when the SU-101 faces tier 10 tanks anyway, could be only done if it would be a premium

All in all, I would not recommend the Tas rohamlöveg for tier 8, but it can be done (even if not too easily), if WG chooses that way.

This is the most problematic vehicle of this TD branch. The historians, and the literature about this topic are divided to those, who think the plan of creating an assault gun on the basis of the Tas medium tank is possible, even if there’s no evidence to it yet, and those, who deny the existence of such project altogether. Therefore, unfortunately, this TD is on the edge of historicity. The first theory about it is based on a mistake, you can read about it under the link at the History section above.

However, memories and verbal recollections of the original developers were also used when the theory of the Tas TD was created, but their flashbacks were collected by “amateurs” (not by educated historians, who routinely do such interviews) and at least 40-50 years after the development took place. No concrete evidence (blueprint or official description) has been found yet, that would support the existence of the Tas rohamlöveg.
However, we can not rule out its existence for 100% sure. Even if there was no prototype assembled of it, as a napkin plan, or even as a basic design, it could have existed, because it would be very logical for the creators to think about the possibility to create an assault gun/tank destroyer, based on the Tas medium tank during the times of the WWII. It’s a shame that we can’t ask them anymore, because sadly, all of them passed away since.

But, and it’s a huge but, World of Tanks is not a history simulator game, we can already play even less historic vehicles or rarely, complete fakes in order to have fun. Therefore, I think that because the existent of the Tas Rohamlöveg is not entirely unimaginable and because at least some of the acknowledged historians do not rule out the possibility of its existence, we should be able to play it inside this game. Hence my possible vehicle description, it was copied from the in-game description of the Jagdpanzer E-100.

Lastly, another problem is that this TD would not have connections to the other Hungarian tank destroyers, because the tier 5 slot can be only filled by a historically overbuffed vehicle (Szebeny), but there’s nothing to put to tier 6 even by then. Therefore, it’s questionable that WG would implement it with only one connection with the medium branch, when it’s only tier 7 and it would lead nowhere, as there aren’t any logical connection anywhere from the Tas rohamlöveg to higher tiers. Therefore, I guess the developers would simply put this vehicle in as a premium TD.

Cons:
- Historically a bit questionable
- Nearly nothing is sure about it
- Frontal transmission

This part concludes this series of articles. I hope you enjoyed reading it, and I it gave you the idea why should these Hungarian vehicles be added to World of Tanks, and how could they perform in the future.

12 thoughts on “Hungarian Branch in WoT – Part 7: The problems with the Tas rohamlöveg”