So, I wrote the Type-59 article last time and it seemed to get some praises and some of you guys requested more tank history articles on Chinese tanks, since there isn’t many info on them in English.

In this article, I am going to write about the 121 and other vehicles such as Type 69 and more.

First, I MUST make this fact clear: 121 is not WZ-121! It seems like a lot of you thinks 121 is WZ-121, but it’s not. 121 was China’s first generation tank. As I have mentioned in the Type 59 article, China and USSR broke apart in relationship and so, China had to produce Type 59′s (copy of T-54A). In 1962, China’s engineers predicted the likely future threats to tanks – and so, 121 was selected as the designation for the first generation tank plan. Later on, the 121 program was abandoned due to the development of 2nd generation tanks and the designation number 121 was passed over by the Type 69 (designated WZ-121). So technically, there are big differences between 121 and WZ-121.

121′s goal was to be a tank on par with Soviet and Western 2nd Gen tanks, such as the T-62. To give you guys an interesting extra piece of information, China’s main tank development was divided to medium tanks (later called MBT), heavies and lights are kind of secondary importance compared to the mediums. In terms of heavy tanks, 111 and 112 used different road wheel layout, similar to that of IS-4 and ST-I, but after some debates, 111 tank plan won and it was further developed (I don’t want to go into too much details on heavies here, but I am sure on FTR, there was a WZ-111 article previously).

With greater threat from Soviet Union in the 60′s due to the fact they have produced T-62 in vast quantities, China’s tanks seemed very outclassed and so, China provided an extra boost to the development of new medium tanks. The idea of enemy MBT (more mediums at the time) vs “our” heavy tanks resulted in the future 111 (apparently many variants were thought of) fighting using 60-122 cannon.

The 60′s was a period where composite amour came into the spotlight and massive heavy tanks were regarded more useless than before – so, in 1963, an order came to halt the development of heavy tanks and focus on 2nd gen mediums or early MBT’s – it was made sure that resources would be given to the development of the Type-69. Due to the fact that 121 was China’s first attempt to create a new medium tank, it was too hard to produce something that would actually be capable of fighting in the future cold war scenario. Quickly, China’s fifth machinery industry gave the order to halt the 121 program and realizing that creating the 121 would take too much time, they shifted the focus once again, towards the famous Type-69, known as WZ-121. So from all of this, 121 proved to be too ambitious for the time and to be honest, switching to the easier WZ-121 plan was actually not that bad of an idea.

The prototype of the 121 was made, but no pictures exist to show us what it looked like and surprisingly enough, it was destroyed in the Chinese Nuclear Test (I think they never thought of keeping a failed tank, so why not use it as a test vehicle, would have loved if 121, WZ-132 etc. were kept to this date). After halting the 121 program, there was a tank called “triple hydraulics”, that used 3 hydraulic systems. But even though switching to 2nd generation tanks, they all proved to be too problematic, so it wasn’t until the 80′s when they actually entered service. WG made up many (or most) technical details and may not be historical, but the emphasis on bigger gun is accurately shown in WOT at least, so all I can say is that at least 121 is not unhistorical like the WT E-100.

Many of the pieces of data for the 121 are probably either lost or still not available for the public research, lying around in some secret military archive. Note that in the last part of the Chinese line introduction, the narrator mentioned something like “Thanks to the Chinese government for allowing us to gain access to important historical documents, we are able to create the Chinese line”, which suggest to me that probably not many people have seen them and need special permission to do so.

Sorry, if I didn’t give too much technical details on the 121, that is due to the fact that I spent time digging for them but there don’t seem to be many reliable sources. In fact, there weren’t any going into details. :( 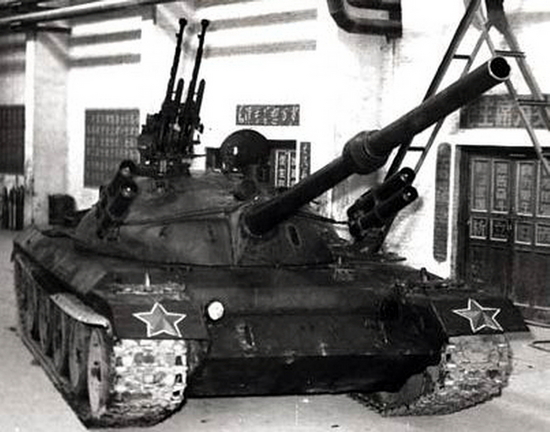 This is a photo of the triple hydraulics prototype vehicle. It did not make it into mass production because there were many mechanical problems that could not be solved, so Type-69 was really the only somewhat successful 2nd generation tank in China. I could write about the triple hydraulics if there is enough demand for it (better to leave me YouTube comments because I get notifications whereas FTR I might miss many of your suggestions).

Regarding the Nuclear Test 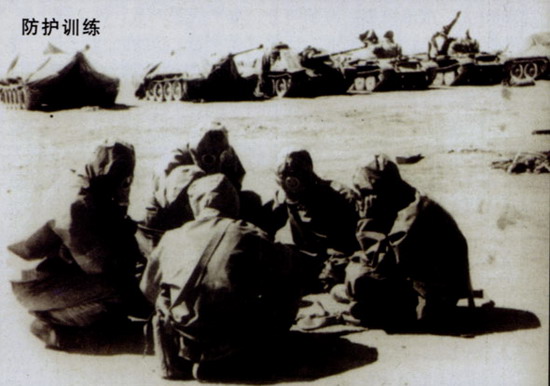 As the pictures illustrate, China had a special group of heroes that placed their lives on the line during the nuclear tests, they were tankers selected to be very good at their jobs and strong in mindset so the information would never be leaked. The plan was to drive tanks into the nuclear explosion zone soon after the detonation to gain data for many useful purposes, such as the conditions of tanks in a fallout zone, protection… 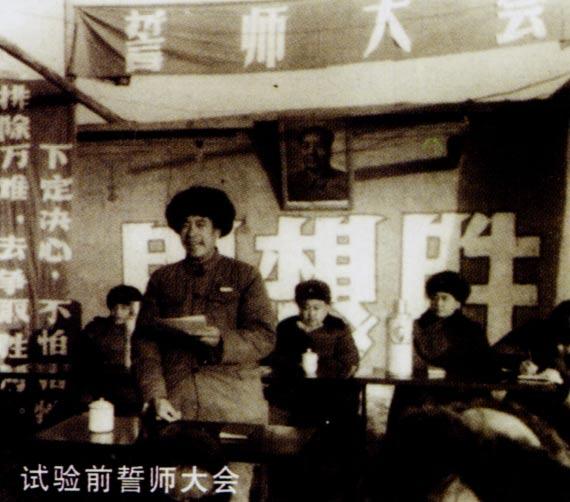 The pictures show tankers given final instructions and motivations before the test and cleaning of the tanks after the test. 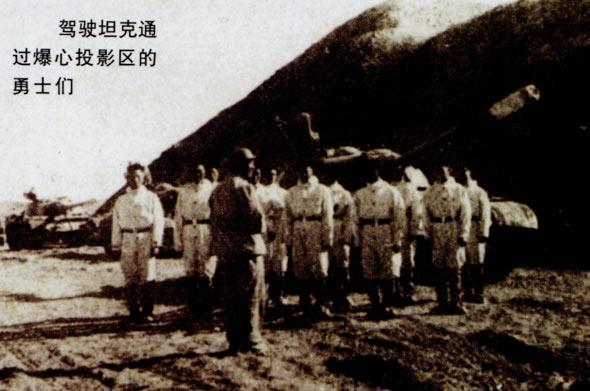 Tanks like the 121 are probably already placed in the blast zone to get blasted away and see the actual damage done to them afterwards. I have seen clips on YouTube of this type of testing.

In fact, recently I saw a TV report where a family member of a pilot, who flew a H-6 bomber into a cloud of radioactive dust during the explosion found out 4 decades after that their father was a hero that did such thing. During the interview, the kids of the pilot a few year after the test saw their father turn very old despite being in his 30s (tissue degradation caused by radiation). They only found out when it was officially announced on the news so the tankers, who drove into the explosion zone must have suffered similar effects. No doubt, it would have shortened their life span. 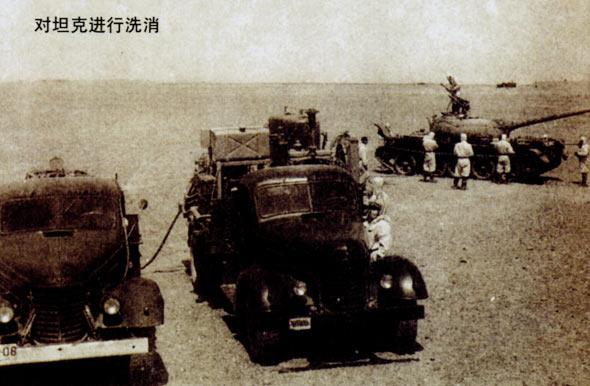 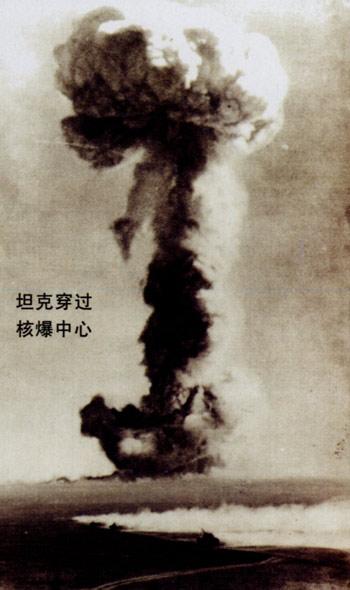 So hopefully that was entertaining for all of you guys, but there is yet a lot to cover.

I will go over this quickly. In the 50′s, the Soviets were thinking about giving the T-54A technology to China. China’s military thought that in the case Soviets decided not to share the T-54, PLA would not have accepted the T-34-85 (as in mass producing them for the 60′s so on). The engineers planned and designed tanks which eliminated the weakness of the T-34-85 while using most of its components. T-34-1 was just a lower profile T-34-85 to some extent. The military was unsatisfied with the T-34-1, so T-34-2 was designed with less weight and lower profile. Using the fact that the smaller size meant less weight, they were able to add more frontal armour (turret armour as well).

Later, T-54A production technology was given to China – however, the Soviets caused several delays in the handover of the special materials for the armour, as I have mentioned in the Type-59 article. The T-34-3 was to have used most of the technologies from the T-54A, but more advanced ones which might not be easily copied might be neglected, making it a worse T-54A. In the end, by June 1957, all the equipment were in place, so the T-34-3 had to be abandoned, since it became pointless with the much better T-54 in service.

That’s pretty much the purpose behind the T-34-X series of tanks.