as you probably know, both the US and the EU server have a special event, where you can (for limited time only) buy the KV-220. For those who don’t know, KV-220 is a tier 5 heavy tank, previously exclusive to the Russian server. It’s main advantages are thick hull armor and the fact that it has a limited MM (it will not see tier 7 vehicles). Please note that the fact EU wikipedia doesn’t mention this fact means only that EU wikipedia has it wrong. It does have limited MM.

So, what IS the KV-220? Basically, it’s a KV-3 hull with KV-1 turret and a rather poor 76mm gun. If you are interested in its real life history (yes, this vehicle actually existed and fought), have a look at Ensign Expendable’s KV-220 article. It’s worth reading.

On European server, KV-220 is offered as a part of the “Collector’s Delight” for 49.95 EUR (along with a garage slot, 30 days of premium and 10500 gold). As you can see, that’s a lot of money for a tier 5 tank, especially for hardcore players, who usually don’t need gold or premium account time. It’s an obvious moneygrab, aimed at people, who want to have something special – and that’s fine, in real life you also pay for exclusivity. To me the price feels really steep (30 EUR with adequate gold/premium would be IMHO more adequate). But that’s not what this post is about. This post is about its performance.

Yesterday, a bunch of guys with access to special accounts that have this tank took this vehicle for a spin to test what it can do. First, let’s have a look at its basic parameters. Here is the wikipedia page about it, you can see the basic parameters there.

As you can see here, the frontal hull armor is 100mm thick and somewhat sloped. This is one of the rare instances where the lower frontal plate is actually better armored (due to the slope) than the upper part of the plate. The upper plate also has driver’s hatch and the MG shield 80mm weakspots, so aim for the upper plate (it is better sloped): 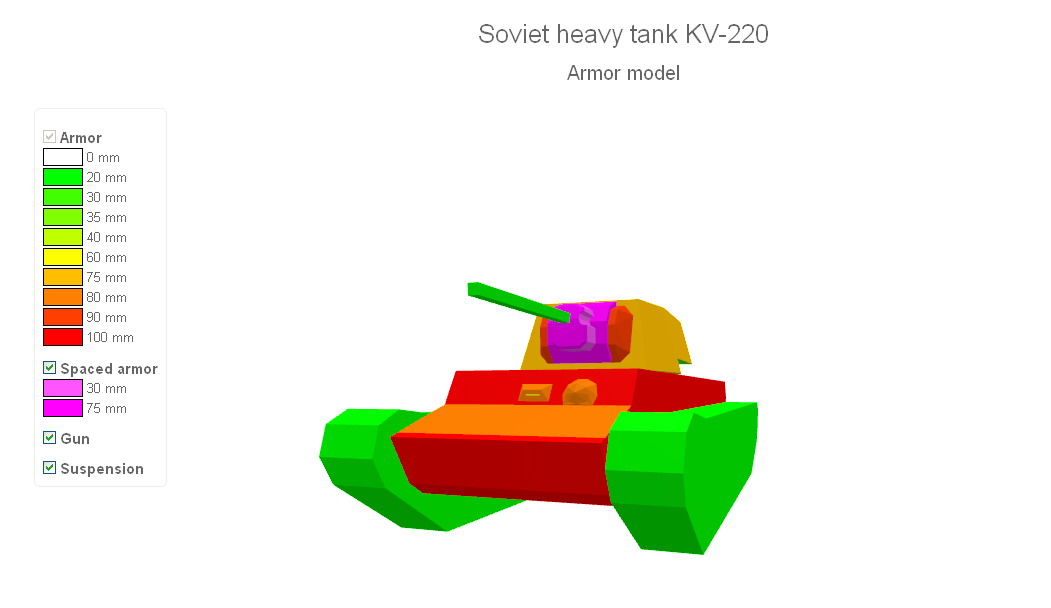 The turret however is quite thin: 75mm only, so unless you hit the mantlet, you have a fair chance of penetrating. Therefore, if you encounter this tank, your best bet is to aim around the mantlet. Most of the shots will pass through. Don’t be fooled by the paper “90mm” turret front thickness, that’s basically just the red area behind the mantlet.

Firing tests conducted against KV-220 by Churchill III tank (6pdr, 110 pen), T1 Heavy (76mm M1A1, 128 pen) and KV-1 (85mm F30, 120 pen) have shown that the vehicle is quite resistant to the upper and lower plate armor shots (100mm red areas). The 6pdr and 76mm gun had issues dealing with the hull armor (especially when angled), with only a part of shells penetrating (roughly 50 percent on average). Mantlet area of the turret is almost impossible to penetrate by tier 5 and 6 weapons, but the turret plate (orange area) proved to be very vulnerable. In case you don’t want to waste gold ammunition, I suggest aiming there. Needless to say that against Dicker Max shells, even the hull armor cannot stand (at roughly 250 meters, practically every shell penetrated and only 2 bounced during tests – again, the lower frontal plate proved to be tougher).

Last thing worth noting is the fact this vehicle is quite susceptible to engine damage, when hit from sides into the rear area. In our tests it did not star burning immediately after 1st shot (the engine has 120 hitpoints, KV-1 engines have 85, 90, 140 hitpoints, with 75-80 module damage being the usual for the guns of that tier).

The gun is not actually historical and quite poor to boot. It’s the 76mm ZIS-5 – KV-1 stock gun. Its parameters are:

This gun is adequate for tier 5 battles, but somewhat lacking for tier 6′s. Its main issue however is the accuracy, the shells fly all over the place and you won’t be hitting anything, unless coming up close. The elevation/depression are sufficient and the turret turn rate is practically identical to KV-1.

Firing tests of the gun were conducted using regular ammunition against KV-1, T1 Heavy and Churchill III tank, at the distance of 100 meters, with no hull angling. At this distance, KV-220 already has huge issues with accuracy, with roughly 30 percent of shots flying wide. Of those that hit, T1 proved to be penetrable well in front armor, KV-1 turret proved to be invulnerable to KV-220 shots, while frontal hull got mostly penetrated. Churchill proved to be almost invulnerable to this gun, mostly again because poor accuracy did not allow proper aiming for weakspots. Second test was conducted against armor angled 30 percent degrees. When angled as such, all three tanks (KV-1, T1 Heavy and Churchill III) proved to be completely invulnerable to regular AP shots of KV-220.

Unlike the KV-1, this vehicle has (actually, again unhistorical) 650 horsepower engine (compared to real life, 700hp and even 850hp supercharged engines were available). That is… not that much, given the fact this tank weights 62 tons. Surprisingly, this vehicle is fairly mobile. During the tests, it proved to be a tiny little bit faster than an elite KV-1 on hard terrain and also on soft terrain. Same goes for turning rate.

This is how a “race” between tested KV-220 (without camo), elite KV-1 (with camo), T1 Heavy and Churchill III ended up. The mobility is practically identical (KV-220 proved to be a tiny little bit faster). 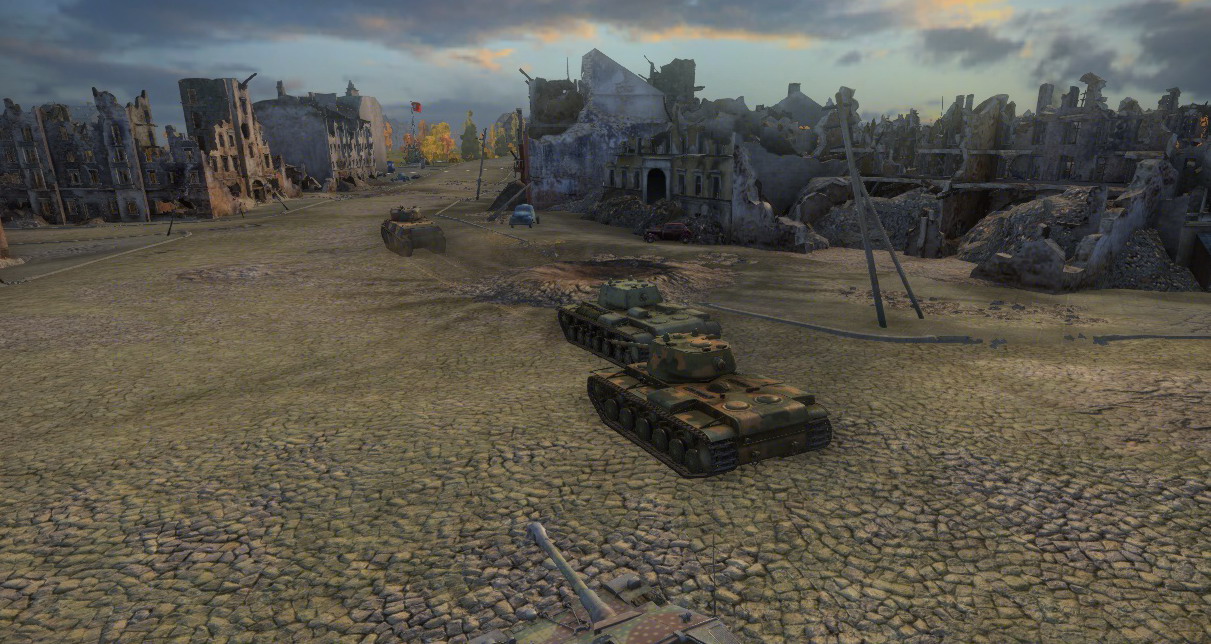 The tank itself isn’t bad, but the armor won’t save it. Not when everyone is carrying gold ammo around and even when regular shells can penetrate it at close distances (and it has to close in in order to make the bad accuracy work). In tier 6 battles against 88mm guns, it will be completely outmatched. If you want a new vehicle you will enjoy playing and not simply a rare collectible, it’s not worth it. However, high price will ensure that there won’t be many of those around, so if you are indeed a hardcore collector, it’s probably worth acquiring.