this part will be more like an addendum to the entire series. Last time we left the Czechoslovak AA autocannons, it was with an unsuccessful one-barrel LP-157, an R10 autocannon, based on the T-34/85 hull from 1955. A mock-up of the autocannon was made (the photos can be viewed in Part 2).

Here is the upgraded version with the R12 autocannon mockup 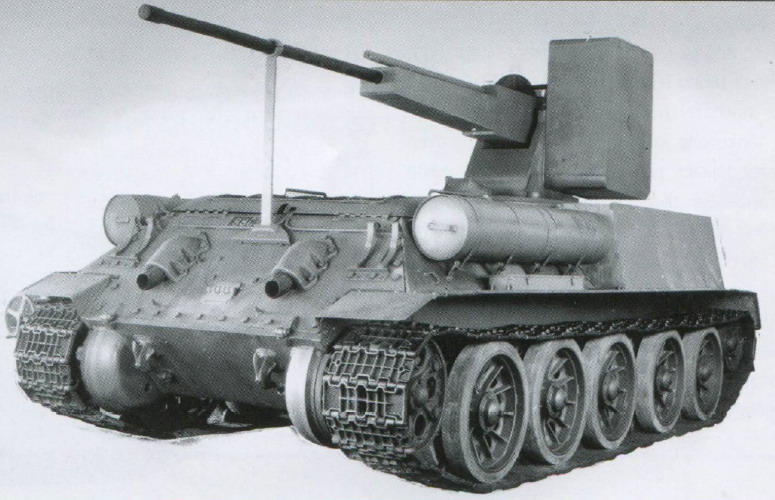 The fate of this version was already described in part 2, I will only add that the full-scale mockup was indeed produced in June 1955. The designation LP-157 means basically “an AA gun, model 1, 57mm”. Two variants were considered actually – one with a classic “magazine”, another for continuous fire with an open “funnel”, where the ammunition could be continuously fed.

The official technical designation stated that the vehicle was intended to protect mechanized and motorized columns with the specific task to make its parts as much compatible with the other vehicles as possible, even though it did have some modifications, such as installing the new GSR3000 dynamo. Several boxes of DT machinegun ammo were removed and a RM31T radio was installed on their place. The ammo rack was also modified to carry the 57mm rounds.

The hull was the classic T-34/85. A driver and a radioman/machinegunner were situated in the hull. The new turret had the cannon (along with its counterweights) isntalled externally (a new turret ring was required), the turret was “sunk” into the hull in fact and the remaining three members of the crew (commander, gunner, aim specialist) were actually sitting inside the hull as well.

The gun was fed by a magazine with 40 rounds (which was adequate, since more rounds in one burst would overheat the gun). The gun was firing from the height of 2550mm. The magazine construction was not described per se in the documentation, but the vehicle was carrying 52 8-round clips of JOSv HE ammo (208 rounds) and 32 JPSv AP ammunition.

On 30.6.1955, Konstrukta Brno submitted its proposal, made by Ing.Miroslav Kotík, to the army – it was a proposal of the self-propelled twin-linked 57mm autocannon, based on the T-34/85 hull, designated “Dvoukanon na tanku T-34, situace B” (“Twin cannon on T-34 tank, proposal B”). The twin cannon was the 57mm R10 (see Part 2 for characteristics) and its feeder was designed so that it could be fed continuously by two “funnels”. The twin gun turret was designed not only for the T-34 tank, but on pretty much anything, including a four wheel truck (or even on a towed mount). 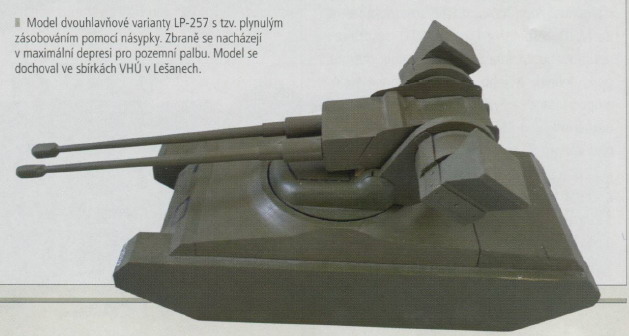 The turret was protected by 25mm of armor. The guns were positioned 510mm from one another and both had to be of different construction (“left” and “right” gun). Their mount allowed for extreme elevation (-6/+120) and the turret could be rotated 360 degrees. The 3 crewmembers, operation the turret, were half-lying in their seats. However, it’s worth noting that the designer actually proposed a fully automated version of the turret as well, without any crewmembers, who would actually operate the turret from a safe distance (this solution was proposed for fixed installations and towed version). A semi-automated version (slaved to the fire control vehicle, with crew firing according to commands of the fire control vehicle crew) was also proposed.

Large magazines for each gun could carry 50 rounds each. However, when firing at armored targets (!), the crew switched to secondary internal feeders, that carried 12 rounds of AP ammo each. Each gun could theoretically fire 400 rounds per minute, but the rate of fire could be set as lower.

Both the LP-157 and LP-257 proposals were in the end refused. The reasons for that seem rather unclear, since the Czechoslovak army did not use the Soviet ZSU-57-2 SPAA guns either, but the army was using the Soviet S-60 AA guns as such and it’s likely that further development of the indigenous 57mm guns (400 R10 guns were made in the end) was considered pointless. Either way, ČSLA stayed without a proper self-propelled AA guns until the introduction of the 30mm Vz.53/59 “Ještěrka” gun truck in 1959.