Silentstalker: Hello everyone. Quite some time ago, I started (but never finished) the series on Hungarian armor. Karika will now continue where I finished. This is probably going to be the last article of the series though, other Hungarian vehicle posts are likely going to come not as a part of the “Hungarian armor” series. Enjoy!

In January 1943, after the mass production of the 41M. Turán II medium tank with the short barreled 75mm L/25 gun has begun, the first combat experiences showed that unfortunately these vehicles did not have enough firepower and protection against the most up-to-date Russian tanks and anti-tank guns either, even after the upgrade from the 40mm cannon of the Turán I. However, the Hungarian troops needed continuous tank replenishment, so the Hungarian Ministry of Defence just could not halt the – more or less still obsolete – Turán II production.

Below: The first prototype wooden Turán III turret with a mock-up gun on a Turán II chassis 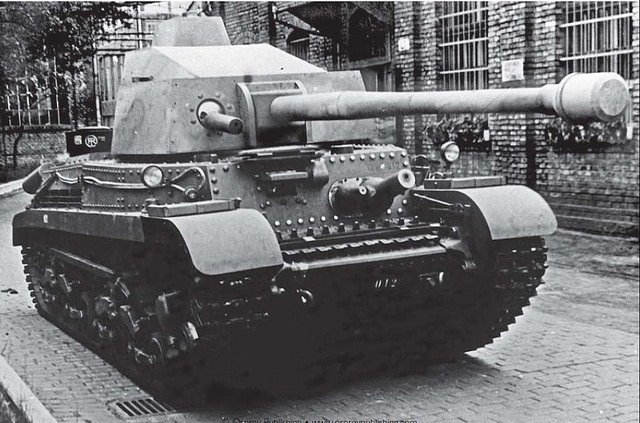 At first, to resolve this problem, the Hungarians tried to convince their ally, Germany, to sell manufactured tanks or the production rights for one of their most advanced tank designs, for example the Pz. Kpfw. IV Ausf. H or the Pz. Kpfw. V Panther. Of course, Germany was unwilling to sell manufactured tanks in large numbers to any of their allies, because in 1943, they nearly couldn’t even produce enough combat vehicles for their own purposes. They did not have any advanced tanks to spare.

In the production rights/licence issue, Germany was also unwilling to sell any of their advanced designs, because on one hand, at that time, the Pz. IV H and Pz. V designs were still in an immature state – the Hungarian delegation visited Germany in April 1943, the month when the production of the Ausf H. started, and the first version of the Panther, the Ausf. D was just in production for a few months.

On the other hand, even if the Hungarian military leaders didn’t want to admit it, Hungarian industry was not advanced enough to produce such a complicated vehicle as the Panther. Plus, complete switch to a new product would have halted the assembly lines for months and the Hungarian Army could not afford such outage.

However, the Germans offered the production rights (with a horribly high price tag) for one of their earlier tank design, namely the license for the Pz. Kpfw. Ausf. F2, which was armed with the 7,5cm KwK 40 L/43 cannon. But the Hungarian Institute of Military Science (HTI) found the Ausf. F2 not enough, a „too little step ahead”, so the Hungarians decided to resolve the problem domestically. After the failed purchase, the Hungarian Military Leaderboard and the HTI decided (at least tried) to solve the problem of the missing powerful medium tank in two ways:

- At first, to modify the existing Turán I and II design, or even already manufactured vehicle,s with additional (bolted on) armor plates and mounting a higher performance, long barrel 75mm cannon in a reshaped turret on them. This project became the Turán III.
- In the meantime, while the factories manufacture the upgraded Turán, make a completely new, advanced tank design on their own, which could compete even against the most advanced enemy armour. This project resulted later the 44M. Tas medium tank. 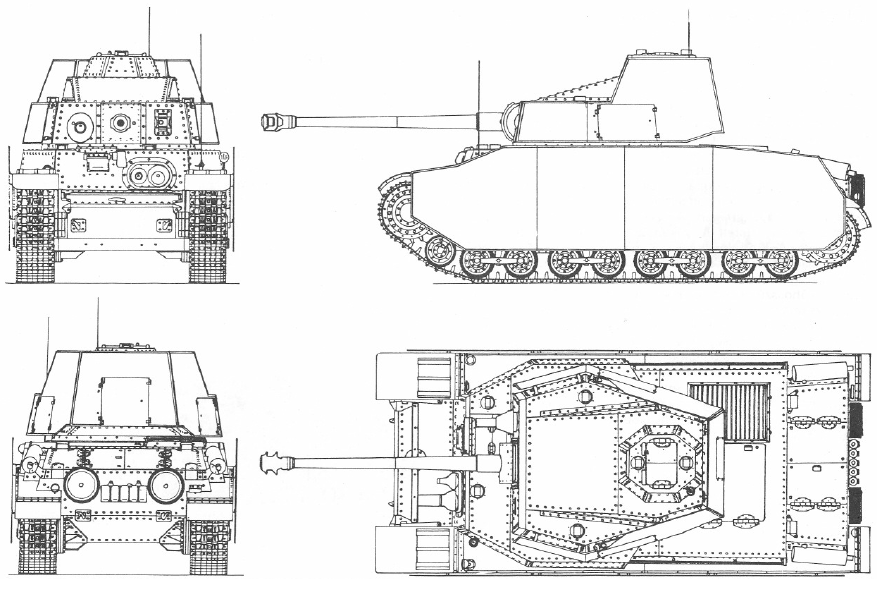 The original requirements for the modified Turán III were the following:

- mount the new 75mm 43 M. L/55 cannon on the same turret of the Turán I and II.
- bolt additional armour plates on the most critical points of the armour, to increase the protection of the vehicle. That means for example on the frontal armour plate: increase from 50 mm to 80 mm.
- add factory mounted, perforated 8mm side-skirts against the Soviet anti-tank rifles
- increase the engine performance if possible.

However, because of the lack of resources and development time, not every modification could be carried out.

The abovementioned 75mm 43 M. L/55 tank gun was already under development at that time, thanks to the 43M. Zrínyi I assault gun project, that carried this exact cannon too. It was the slightly modified licensed version of the German 7,5cm Pak 40, which the Germans sold to Hungary after long negotiations. However, its development was very slow, so only two pieces were ever made by the DIMÁVAG factory in December 1943 before the end of the war – one for the Zrínyi I prototype and an other for the Turán III prototype – because of the continous malfunctions of the prototype guns. One of these two guns was used for the factory trials of the 44M. Tas too. 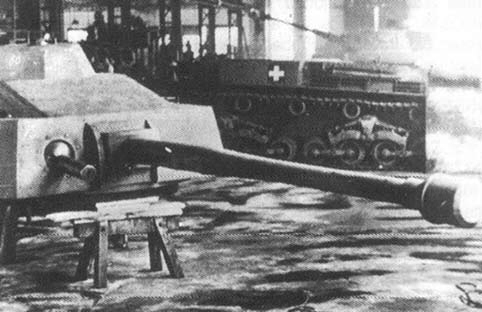 The long 75mm gun simply could not be fitted in the turret of the Turán I or Turán II, so the engineers had to design a new, bigger turret, which meant that the earlier Turán versions could not get the new cannon so easily. The new, redesigned turret’s wooden prototype was completed in September 1943 and it was tested with a wooden dummy gun on a Turán II chassis with 2H-012 license plate. The turret ring diameter didn’t change, but the turret itself became wider, longer (to balance the longer gun), and much higher than the earlier Turán turrets.

The strangely high turret design came from an earlier stage plan, where the redesigned turret got an additional “elevated” commander cupola, so the commander could command the vehicle while he’s standing. This idea was later rejected, but the “elevated” commander cupola remained and this made the shape of the turret rather odd. The early wooden prototype turret differed from the later “would be serial” turret in one part, as you can see on the picture below: 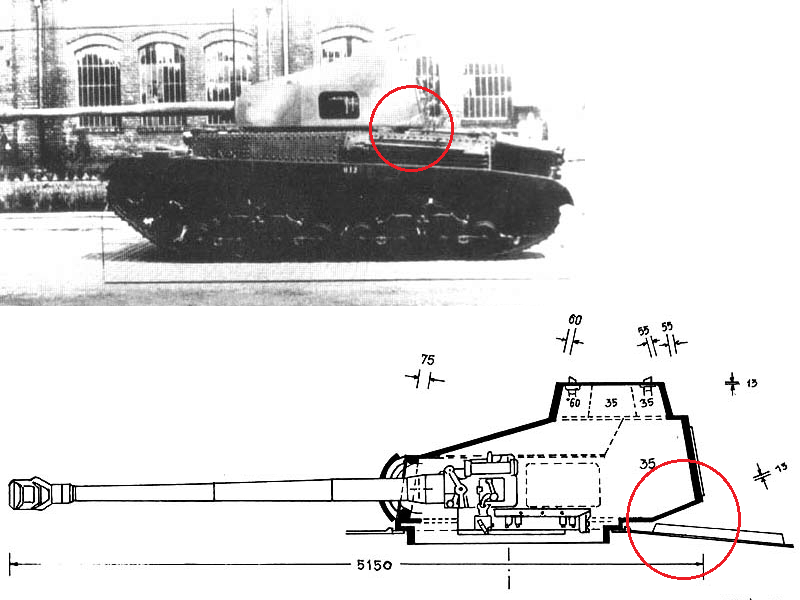 Plus, it didn’t have factory mounted side skirts, unlike the planned serial vehicle.

Note: Some older books says that there were an other prototype turret, which was more similar to the turret of the Turán II. This turret would have been able to carry one less (only 2 instead of 3) crew members because of the lack of inner space. However, I didn’t find any picture or details about it and newer books and articles didn’t say anything about this alternative turret, so it might be an incorrect information.

To speed up the development, the thickness of the hull armour front plate and the gun mantlet was only increased from 50mm to 75 mm (25+25+25mm of bolted armor) instead of the desired 80. In addition, the thickness of the hull side armour, the frontal armour of the commander cupola and the turret side and rear armour were increased by a little bit as well. Unfortunately, the performance of original WM V-8H engine was not changed, because there was not enough time to develop it. And, because of the increased weight with the same engine, maximum speed decreased to 39 km/h.

Below: The only ever built Turán III 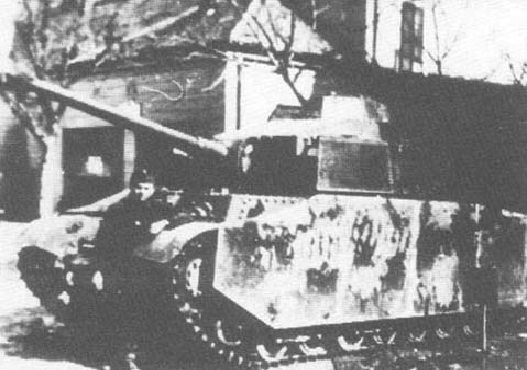 The first complete 43M. Turán III – also known as Turán 75 hosszú (=long) – prototype with the new turret, increased armor thickness, the long 75mm gun and additional 8mm thick side-skirts was finished in February 1944. However, because of the late war raw material shortage such as the necessary alloy elements and the decrease of production capacity due to the continuous Allied bombing runs against Hungarian industrial areas, no more Turán III tanks were ever created except that prototype even though some sources claim that another 4 or 5 Turán IIs were upgraded (up-armoured) to Turán IIIs, without the long 75mm gun.

Sadly, the later fate of that Turán III is unknown. 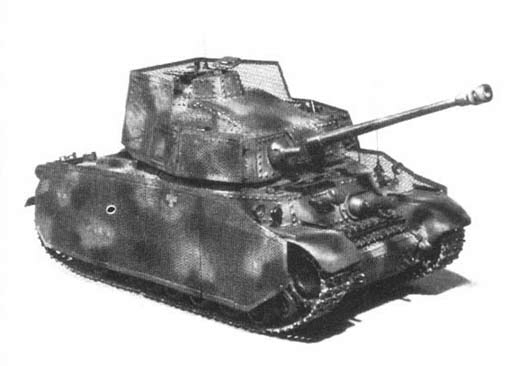 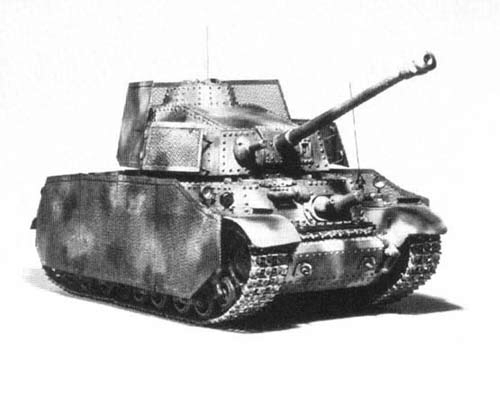 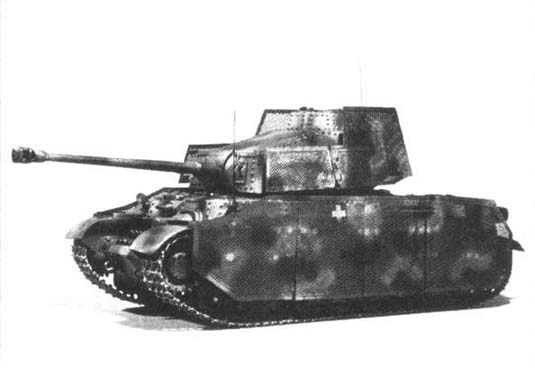 In my opinion, the Turán III should be the tier 5 Hungarian medium tank. Its in-game characteristics would be something similar to the German tier 5 medium, Pz. Kpfw. IV.Ausf. H, with a better turret armor, similar gun, but worse mobility. I found no data about its vertical gun arc, but if the armor schematics above are correct, it would be somewhere between -8° and -10°.

With the historical 260 hp engine, the Turán III would be slow, but unfortunately no other historical engines were mounted inside it. To compare: it would be defenitely not SuperPershing slow, but it would have somewhat similiar mobility to the in-game French B1 heavy tank with its top engine. Its main weakspot would be its commander cupola (like on many other in-game vehicles), which is only 60mm thick from the front, and 35mm from the other sides and, well… it’s gigantic.

However, it would be interesting to see the first, wooden turreted prototype, the 2H-012 licence plate Turán as a tier 5 premium vehicle. It would be quite similar to the researchable Turán III, same gun, practically the same turret (only that little difference as on the picture above), but it would have the hull armor of the 41M. Turán II, which means for example just 50mm front armour instead of 75mm. In addition, the premium Turán III would not get side-skirts. This thinner armour also means, that it would have slightly better mobility than the researchable Turán III. Its in-game name should be “Turán III prototype”, or something like that, for the sake of simplicity – even if the original Turán III was just a prototype. Unfortunately, the Hungarian engineers didn’t use an alternative name for this vehicle.

IMO this is the best, most original option for a tier 5 premium medium tank – the highest tier premium tank in the Hungarian tech tree – because the Hungarians did not modify their foreign tanks (like the T-34 or the Pz. IV in this matter) enough to implement them in WoT as a ‘new’ vehicle. Plus, we don’t need more copy-paste tanks, or T-34s.

Also, the tier 5 premium medium tanks have somewhat important role in the matter of new tech trees, because if we take a look back the implementation of the British or the Japanese trees, Wargaming released a premium tier 5 medium tank a patch before the new tree arrived. If they add this ‘Turán III prototype’ to their game, they could do this again, maybe together with other European nations’ tier 5 premium tanks if/when the EU tree comes…