For those of you unfamiliar with Russian politics, Dmitriy “Nanotolievich” Medvedev is the guy that kept Putin’s chair warm for a while and pretended that he wasn’t Putin at all. Apparently Putin still keeps him around as the lovable clumsy George Bush-like oaf to his cruel and calculating Dick Cheney, so Medvedev gets to talk about things once in a while. Like in this video, where he’s talking about something tedious. No one really cares.

The interesting part is around 4:06 when he’s showing off a portal for government services. Zoom, enhance!

END_OF_DOCUMENT_TOKEN_TO_BE_REPLACED

It is no secret that Heinz Guderian, a leading thinker in the German school of armoured warfare, was greatly impressed by the Soviet T-34 tank. In October of 1941, one of his subordinates from the 4th Tank Division wrote: “Immediately create copies of the 26-ton Russian tank, and use captured 26- and 52-ton tanks. Each tank regiment should have one company of these tanks.” It is also known that Fast Heinz’ plan to clone the T-34 was unsuccessful. What is less known is what happened later, when Guderian ran into one of the more underrated tanks of the war, the T-60.

The T-60 was one of the most numerous tanks of the Second World War, but, as a light tank, it lacked the thick armour or impressive firepower of the T-34, IS, Tiger, Panther, and other famous tanks of the war. Little is written about it, which is a shame, as Guderian saw much promise in it. Torsion bars, that Russian hard steel he was a fan of, sloped armour, easily obtainable and reparable engines. The design was far superior to that of German light tanks, and even the captured Czech tanks in the Wehrmacht’s service were starting to show their age. The T-60, a modern light tank, was what the Wehrmacht needed. Better yet, the factory at Kharkov was not evacuated completely before the Germans captured it, giving them a manufacturing base.

END_OF_DOCUMENT_TOKEN_TO_BE_REPLACED

The T-100Z makes for a reasonable tier 6 choice.

The T-100Z is basically a KV-2 with a bonus 45 mm gun turret in the front. It even uses the same gun. The armour is the same as on the T-100, 60 mm, but that’s the price you pay if you want a little bonus firepower for plinking away at things your massive main gun can’t quite one-shot. Also, unlike a lot of tanks in this game, it saw combat! So historical! 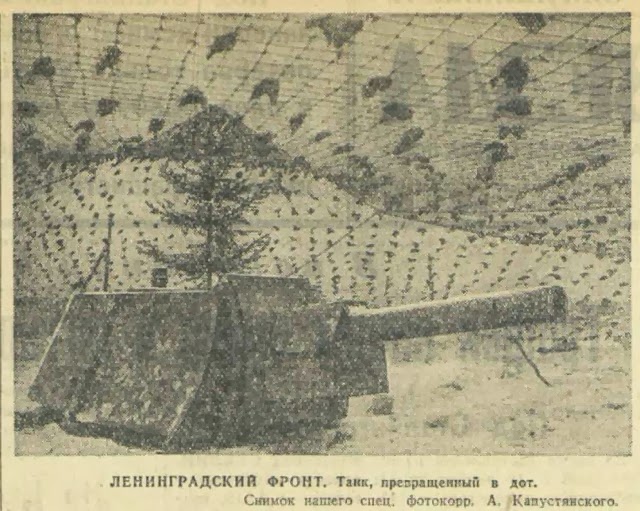 Leningrad Front: A tank made into a pillbox. Photograph by special photographer A. Kapustyanskiy

END_OF_DOCUMENT_TOKEN_TO_BE_REPLACED

The appearance of the T-35 in World of Tanks is nothing new. Screenshots were published ages ago, but everyone knew that the tank will not arrive until Wargaming has figured out what to do with (and actually implemented) multiple turret mechanisms. Sadly, there are few tanks in the game that could take advantage of this technology. So why just one tank? Why not a whole tech tree?

END_OF_DOCUMENT_TOKEN_TO_BE_REPLACED

A long time ago  before the Soviet heavy tree split, the KV-4 was going to be a wonder-tank! It was going to go 50 kph! It would have a 130 mm gun! However, as the deadline for the test approached, the tank’s stats decreased to a more reasonable level that we see today. In a recent developer Q&A, SerB mentioned the tank that was the “KV-4″ with a 130 mm gun: the 103. All he said was that it was based on the T-100 chassis and had a B-13 130 mm naval gun (like on the SU-100Y). He didn’t mention anything else. So what is this mysterious tank?

END_OF_DOCUMENT_TOKEN_TO_BE_REPLACED

Q: How effective was 152 mm HE against armoured targets? I’m interested in the KV-2 and SU/ISU-152. I’ve heard myths of turrets being blown off Tigers.

A: By the summer of 1941, the Red Army no longer needed the KV-2, so not a lot of them have been built. As a result (and due to the sparse photographic documentation from the Soviet side), not a lot has been written on the performance of its HE shells against enemy armour. However, there are some photos from the Germans.

END_OF_DOCUMENT_TOKEN_TO_BE_REPLACED

In the previous “Nerf My Tank”, I discovered the horrible truth about Russian Bias in World of Tanks. Today, we will learn about the slightly less horrible secret of Chinese Bias.

A compendium of what was probably sales pamphlets from 1932 lists the penetration of a number of AT/AA guns that never went anywhere and that we do not care about, aside from one: the 47 mm Vickers gun. Here is how this gun is represented in the game.

45 mm of penetration at 100 meters? A pretty good number for a gun from the late 1920s. Let’s see if these numbers correspond to reality.

Sadly, the penetration for 100 meters is not listed, but it is estimated from the existing data easily enough. Penetration drops by about 4 mm per 200 meters (less at later ranges, but then again, the decrease isn’t linear). With 30 mm at 300 meters, the penetration is about 34 mm at 100 meters. But wait, what is this, in the game it’s 45 mm, or a whole third higher! Scandalous!

Russian and Chinese bias confirmed, ready your torches and pitchforks!

The Internet is a truly wonderful thing. At the touch of a button, you can access information that would have taken days, maybe even years, to discover previously. Over the past months (nearly a year, hooray!), SS, myself, and many other talented authors and researchers on this blog, as well as an uncountable number of others, have provided you with volumes information about historical armoured vehicles. Countless numbers and statistics have been provided to the public, countless questions asked and answered.

Except this one. This is a very important question, and many man-hours and millions of dollars have went into solving it in various other fields, but goes unnoticed by the average person.

How do you poop in a WWII tank?

END_OF_DOCUMENT_TOKEN_TO_BE_REPLACED

A while ago, I wrote a Q&A special on Soviet tank armour. Since then I have gotten periodic requests to do a similar special on German tank armour. Initially, I did not intend to write such an article, but duty calls. However, this is no ordinary article.

Usually, archive materials do not particularly surprise me. I see a “that’s interesting” here and there, maybe a “huh, I didn’t know that”. I’ve even come to terms with ridiculous things that happen when you try to compare reports from the two sides involved. But this, this is something unprecedented. Many things I have written shocked my readers, but this discovery shocked even me.

It all started, as it usually does, with an argument on an internet forum. As it often happens, we were discussing a DTIC document, specifically “Metallurgical Examination of Armor and Welded Joints from the Side of a German PzKw (Panther) Tank“, to be precise. This report says lots of things one would normally expect to see in a report about late-war German armour: “The steel quality rating was “D”…which is borderline acceptable”, “the fracture was extremely brittle in nature, with a bright flat crystalline surface”, “inferior toughness, as evidenced by brittle fractures and low impact resistance”, “extremely poor shock properties”, etc, etc. If you looked into German armour in any serious manner, you’ve seen it all before. However, WoT forums poster Daigensui brought something unexpected to my attention, a claim by American intelligence that the quality of German armour did not deteriorate from 1942 to 1945. I did not believe my eyes. How could that be? Surely German armour in 1942 was not as bad as it was in 1945? Let’s take a trip back in time, through many years of armour samples, to see where it all went wrong.

END_OF_DOCUMENT_TOKEN_TO_BE_REPLACED

Q: The wiki says that the T-43 was a project to build a medium tank with more armour, but was cancelled when it was discovered that more armament was what was needed. Does the current T-43 not make sense? Would it instead work better as a tier 6 premium tank?

A: At the time the T-43 project began, the 76 mm F-34 was considered sufficient. Later, it turned out that the larger 3-man turret with a wider turret ring could carry an 85 mm gun. The tank was rejected for reasons other than firepower, especially since the turret migrated to the T-34-85. As such, it makes perfect sense to have this tank in game in its current state, armed with an 85 mm gun.
As far as working in a role of a tier 6 premium tank, I don’t think it would. The F-34 is already insufficient at tier 5 in the T-34, having it on a tier 6 tank would be awful.