Welcome to what will most likely be the most controversial part of the FTR Swedish tanks series. In this part, I will be discussing the LS-50, which my proposal for Swedish tier 8 medium tank.

During the development of the 20 ton tank, it was brought up several times that a heavier medium design would be needed and these ideas would eventually be interpreted and realized by starting the EMIL project in 1951. Although not completely historical, my idea for a Swedish tier 8 medium is to utilize the requirements for a heavier tank made within the timeframe of the 20 ton tank existence, but before they turned them into the EMIL 1951. The main and in fact only alternative to my proposal would be to use the British Centurion Mk.3, which was historically used by Sweden after 1953, however this clashes with the main re-occurring theme of Swedish tanks, which is small size with low weight. There are also other problems, such as the lack of module choices. Besides the 20pdr type A and B and possibly Mk.3 and Mk.5 turrets, there would be no more module options. And let’s face it, people don’t want copied tanks that are already available in other trees.

I’ll start with the hull of the tank. In one of the documents, it’s mentioned that “the upper weight limit of 20 tons is to be fully utilized” and that the chassis could be shared with a 30 ton SPG, so that it would be able to handle any possible weight increase. This gives justification for the tank to be based on the same hull as the SPG. Furthermore, there are more ideas of standardizing parts between different vehicles, such as road wheels, tracks, transmissions and engines, which would allow series of possible upgrades.

In my proposal, I have based the hull armor layout on the 1951 project EMIL proposal, but with an extended rear in order not to cut off the hull or the suspension on the longer 30t SPG chassis. I chose the hull of the 1951 EMIL proposal, since this is what became of the project and also because it actually quite closely resembles the Lansen hull. The hull armor has also been “borrowed” from the 1951 EMIL, as the tank is supposed to represent the transitional ideas from the Lansen to the EMIL, this means that the hull armor would be (70/20/20) mm thick (EMIL actually had at least its suspension based of the 30t SPG and would become the new platform for the SPG project).

Another idea that the vehicle could represent is the combination of the tank and anti-tank roles, which is mentioned in one of the documents (this was achieved in the 1951 EMIL). The proposal, based on that idea, described a vehicle armed with the 10,5cm L/50 Lvkan m/42 anti-aircraft gun and based on the 30 ton SPG chassis, with frontal armor of up to 150mm, 25mm side and 20mm rear armor, and the weight of 32-34 tons. I think too that the weight of the vehicle should be borrowed from this idea. The tank would weigh more than the 28 tons of the EMIL, since it’s longer and I think 30-34 tons is the probable range for the weight. I have decided to name this proposed tank LS-50. This name is based on the LS-46 project name for the Strv Leo, while it was in development. 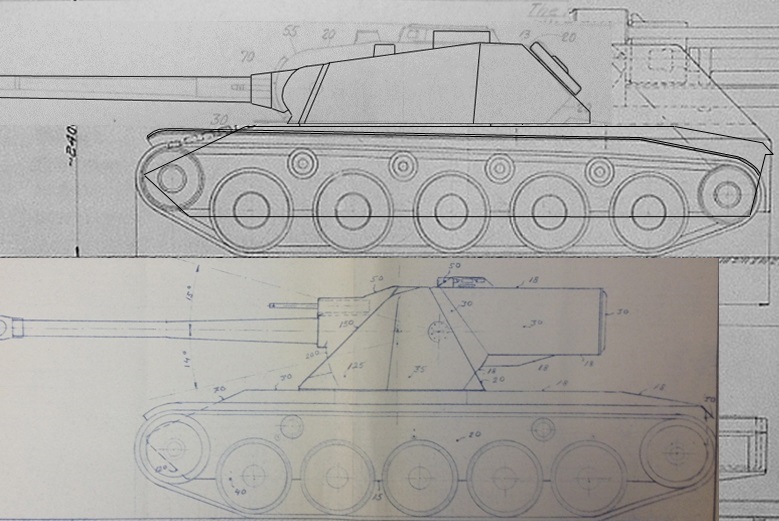 Now that you have the idea of the core concepts of the tank, I’ll explain, how it’s to have module options available. The stock turret should be the top turret from the Strv Leo – hat means the Strv Leo turret with the planned applique armor, that was meant to make it immune to 75mm guns. The armor thickness of such armor is discussed in several documents related to its development and is rated at 110mm. Elite turret was already mentioned above.

The stock armament could also carry over from the Leo and could be either the 105mm L/42 Kan m/34 or the 105mm Strvkan fm/49, proposed for the 20 ton tank project (with 600m/s muzzle velocity), as top gun the tank could mount the 105mm Strvkan fm/50 from the 25t Lansen with 190mm penetration. You need to keep in mind however that the damage of these 10,5cm guns would have to be reduced to around 300 average to work at tier 8. Further gun options could include the 105mm L/50 Lvkan m/42, but that gun might be excessive. As far as engines are concerned, there are plenty to choose from. What I suggest is to use the 450hp engine proposed for the Leo and later the 30t SPG as stock, and the 550hp SFA engine from the 1951 EMIL project as the top engine. Alternatively, there is the 640hp Volvo A12B proposed for the 30t SPG, but that is probably not needed.

In the game, the tank would cover the role of heavily armed but fragile medium tank. Its 105mm gun wouldn’t have the best penetration at 190mm, but would be able to deal some nasty damage, which could probably average around 300 per shot. However, the price for such a big gun would be the paper thin side and rear armor of only 20-25mm and the weak frontal armor (70mm hull and 100mm turret). The mobility of the vehicle would be nothing special for a medium with only around 17hp/t and I suspect the rate of fire and accuracy of the main gun would be quite bad. But the vehicle could possibly be rather stealthy. While it’s a rather long vehicle, the height should be lower than most other tier 8s. All in all, the vehicle would be a decently mobile but fragile medium with a huge gun.

I hope this have given you some insight into the problem the Swedish medium branch faces at tier 8, and what could be done to solve it.