In this part, we’ll take a look at how could the Hungarian remaining tank destroyers be implemented into WoT. Everything is the same as in the previous articles: I will try not to predict game parameters (health points or alpha damage) and the balance parameters (radiorange, RoF, etc.), since they would not necesserily be implemented as I listed them below anyway.

However, I have to state right at the beginning that these TDs are rather difficult to implement into the game. They were all paper-only projects, which never left the drawing board and no prototypes were ever assembled. To further make the situation worse, that there aren’t any historical blueprints or photographs available of them by now, so modeling them is also problematic. The developers of WoT have to rely mostly on the limited, written descriptions and their own imagination if they decide to use these following TDs. Therefore, everything you’ll read from here on in is extremely preliminary and speculative and I’ll try to list the logical ways how we could see these tank destroyers in WoT.

Please note that these below are only the historical/logical characteristics, the would be implemented tanks could get unhistorical stuff as a last resort, if the game balance requires it.

Because of the many, yet unknown factors about the EU tree and the problems with the subsequent TDs, I created an other tech tree proposal, to represent the “other end” of contingency, namely the possibility of the (in some way) shared EU tier 1 tank, the other possible way to add the Toldi light tanks and the alternative places of the following tank destroyers.

The final tree could be somewhere in between probably.

Possible vehicle description
A suggestion appeared in 1940 to re-arm the obsolete 35M. Ansaldo tankettes with 40mm anti-tank cannon of the failed Straussler V-4. However, the plan was rejected by the Hungarian Institute of Military Science, because the suspensions of the Ansaldos were so obsolete and worn out by that time, that such modernization would not have been worth it. The idea never left the drawing board.

Notes and predictable in-game performance:
The project did not have a historical distinctive name, so the in-game name is not sure yet.

This is the least problematic of these group of tank destroyers, because it’s only fit for tier 2 because of its gun. That slot is already occupied by the widely used Nimród, so the Ansaldo 40mm could be only a premium/gift tank there. However, the possible in-game performance of this TD does not look too good on paper, so it’s possible that we won’t see it in the game at all.

As this vehicle design was scrapped early on, way before the development was finished, and there aren’t any blueprints or photos published (exists?) about it, WG artists and developers would probably have to design this TD on their own, athough I personally believe it could have either looked something like the already in-game Renault UE 57, French tier 3 TD or like this Polish TKD: 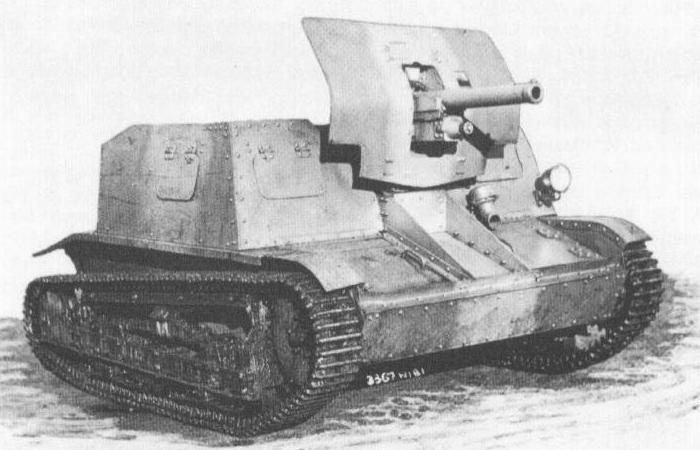 The thing is, because we don’t know anything about how it could have been looked like (yet), its very unlikely that the developers will bother to model this premium TD from a nearly blank page at all, when they have hundreds other European tanks to model for the would-be EU tree. It will definitely not come with any of the first waves of EU tanks, when/if they come.

Cons:
- Not much known about the vehicle
- Bad for crew training
- Sluggish acceleration
- Mediocre gun (can be balanced with soft stats)
- Poor armor
- Open top
- Lightweight, thus vulnerable to ramming

Possible vehicle description
Proposed tank destroyer by György Szebeny, a Hungarian inventor. The main plan was to put an 8cm cannon on a turretless, modified chassis of the 36/40M. Nimród to create an easy to manufacture tank destroyer. The development took place between 1941-1942 and underwent many changes. In the end, the project was halted, because it was considered too expensive and the preparation for the mass production would have been take too much time. No prototype was made, and the idea never left the drawing board.

History:
You can read about the history of the Szebeny / Nimród 80mm tank destroyer here: http://ftr.wot-news.com/2014/01/20/hung … estroyers/ Note that the “In World of Tanks” paragraph of that article is obsolete.

Contrary to common belief, this picture is not actually representing the appearance of the Szebeny tank destroyer:

This is just an article/book illustration, created to illustrate the size of the 80mm 29 M. anti-air cannon compared to the size of the original Nimród self-propelled autocannon. In reality the ’Szebeny’ proposal did not have a turret, and the 8cm gun was mounted in the hull.

However, there’s not much known about it exactly. All we know is that it was turretless, it had an enclosed superstructure, it was able to elevate the gun to extreme degrees (as it was designed as an anti-air/anti-tank unit), it had a commander cupola on the top of the vehicle and Szebeny himself described it as it had something similar height as the German StuG III. No official blueprints however were found, so the artists of WG would have to design it based on the few details and their imagination.

Oh, and yes, you saw that right above, +100° gun elevation. According to the historical description, at the late stage of the development, the gun was able to ’bend back’ another 10 degrees after its vertical 90° position. György Szebeny was quite an overachiever type of person, don’t you think?  Although, I doubt that this will be modelled in the game.

It had the same problem with the turning system the tier 2 Nimród TD.

Problems:
With the historical, Szebeny’s modified cannon – he merged the 18 M. field gun with the breech and reload mechanism of the 29 M. anti-air cannon – this TD would be only a tier 3 candidate. But that tier slot is already taken by the Toldi TD, so it definitely would not be put there. The only logical ways to use it would be:
- Either overbuff it with an unhistorical gun and put it in the end of the regular tree at tier 5. Because it was a paper project, such solution is not unimaginable.
- Or use it as premium tank destroyer at tier 3, with the historical characteristics.

In my opinion they’ll use it as a low tier premium TD, but its not sure of course.

The top, unhistorical gun could be theoretically anything which was used by the Hungarian Army at that time, everyone of them would be just as unhistorical as the other. It doesn’t necessarely will be the 80mm 29/44 M., it’s just a possible choice.

It had the same problem with the turning system the tier 2 Nimród TD.

Pros:
- Good gun depression (with the historical gun)
- Extraordinary gun elevation
- Good horizontal gun arc (with the historical gun, depending on the stage of development)
- Probably decent gun (if it’ll be at tier 5)
- Highest caliber, non-howitzer gun at tier 3, with anticipated high alpha damage, but with average penetration and shell velocity

Cons:
- Not much known about it
- Would require an unhistorical gun or other kind of overbuff at tier 5, only tier 3 candidate with the historical gun
- Sluggish mobility
- Useless armor at tier 5, mediocre/bad at tier 3
- Commander cupola as weakspot
- Odd historical steering system, can not turn in one place IRL

At first I wanted to write about this topic in one part, but it became just too long. So the Tas rohamlöveg, and its problems will be described in the next part.