in part I, we talked about the theoretical concept of the European tree. Now, let’s have a look at some of the stuff, that could come with it and the various nations contained within.

Please note one thing though – okay, three things in fact.

One – the research on possible EU branches is far from complete
Second – some branches do have a problematic situation when it comes to gaps in them
Three – Wargaming is not officially conducting any EU tree research yet.

As I wrote earlier, the final decision whether to implement the EU tree or not should came in Autumn 2014. Until then, it’s up to the fans of this tree to find as much info as possible.

Putting together a qualified EU tree branch proposal is also NOT easy, as you can imagine and quite frankly, for people not of that respective nation, it’s pretty much impossible. That’s why this post will be based on work of other people, who are probably the best at this sort of thing. I will credit them as I go.

While the decision on EU tree is not yet taken, I will be going with the likely variant of each nation having its own branches within the tree (eg. no mixing of nations in one branch) – mixing the branches would create pointless friction (“why do I have to play Polish tanks in order to get to hightier Czechoslovaks” and stuff like that) and (using Occam’s Razor rule) is the most likely. The last variant of crews’ nationality, that was openly discussed, was the option to (when you recruit the crew) select the crew nationality (eg. you could have Czech crews in Italian tanks for example, but ONLY if you specifically choose to do so). In such a case, national voiceover is not a problem (for example, Czech voiceover exists).

Italy is… complicated. Of all the potential EU tree nations, it has a special place (along with Hungary), because its vehicles actually fought and played an important role in WW2. Despite some of them being terribly, terribly obsolete by the time they got into the fight, contrary to popular belief, their deployment was not entirely unsuccessful and cases, where the Italians kicked British ass in Africa are actually not as rare as people think. Italian vehicles would also fit well in historical battles – specifically the African ones versus the British.

Earlier on, there were some rumors about Italy appearing as an independent tree – some info also emerged that WG EU office is pushing for this option, but as of now, unless the rules for new trees (which is “tier 10 of all classes”) change significantly, there is a very little chance of seeing an Italian independent tree. In order to have a look at the Italians, I will be drawing from Vollketten’s and Zarax’s posts on EU/US forums and also some work from Raptor_Fulcrum, a WG EU Italian employee, who works directly with Yuri Pasholok on this.

Anyway, back to Italy. The way I see it, the Italians can build (with difficulties) a full medium branch. Italian light tanks are usually just pre-war/wartime crap and tank destroyers and artillery are very problematic, with the most poweful potential candidate being the mid-war Semovente with a 149mm gun, which was an artillery piece anyway. There is an entire thread about them on US forums, probably the most detailed info on Italian tanks.

Light tanks – well, here it’s pretty straightforward. The L3 tankettes are most likely too weak, but as tier 1 would do. Then there is the 5 ton Ansaldo and the L6 light tanks, both solid tier 1-2 tanks. Little else above that though, no hightier scouts I know of. 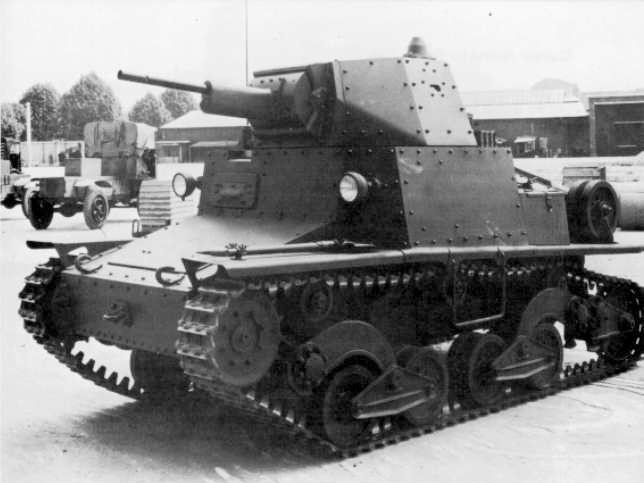 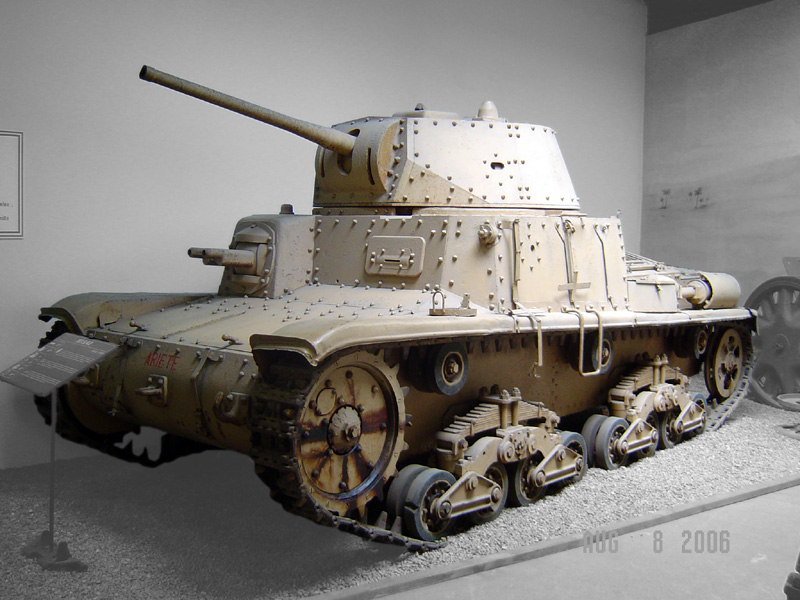 After that it gets a bit complicated. Tier 5 is probably covered by the Celere Sahariano, but after that, the problems are starting. There are the Italian P.75 project of a multi-turret medium tank from 1940 of roughly 30 tons, 30mm armor, a 75mm (L/34?) gun and some sort of 450hp engine (40 km/h). 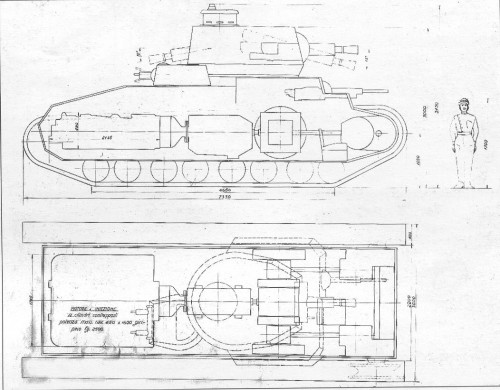 Apparently, there was also a 90mm version, so that could cover tier 6 or so. What remains is the P.40 series of various mutations (including a long 90mm version). As far as I can tell, this is tier 6 stuff, but apparently there were some obscure upgrade projects for the entire thing. Vollketten has it covered in detail. High tiers are actually more interesting. There are two options for tier 10. Either OTO “Centauro” – basically a Leopard with an autoloader, found by Raptor_Fulcrum: 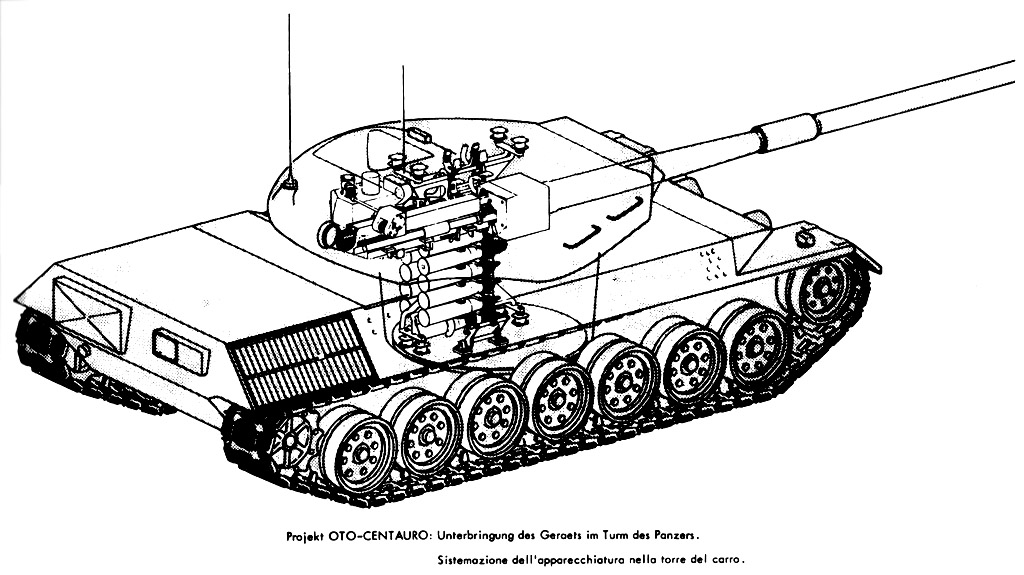 Or an upgraded M47 Patton with a 105mm gun by OTO (it had a different engine too, so overall, it would be a quite distinct vehicle). 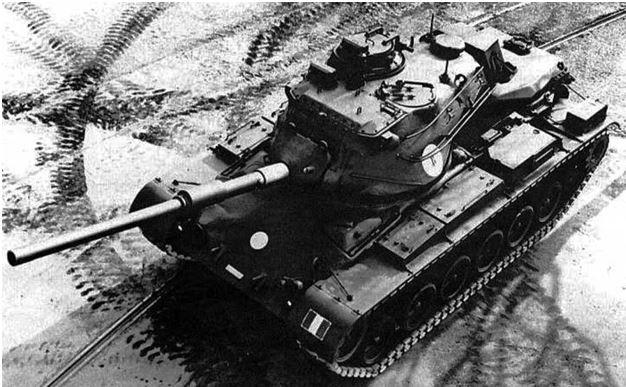 Tier 9 could be the M47 105mm prototype by OTO, but tier 8 is a problem. Zarax proposed to fill it with a Panther (Italians apparently considered making those), but yea, here it’s really unclear. Forget about OF-40 though – too new.

Tank destroyers – yea, pretty much nothing here. A bunch of lotier Semovente guns (Italian take on the “StuG”). Realistically, these would reach tier 6 and that’s it, with the biggest boom being the Semovente 149, but that was an artillery vehicle. 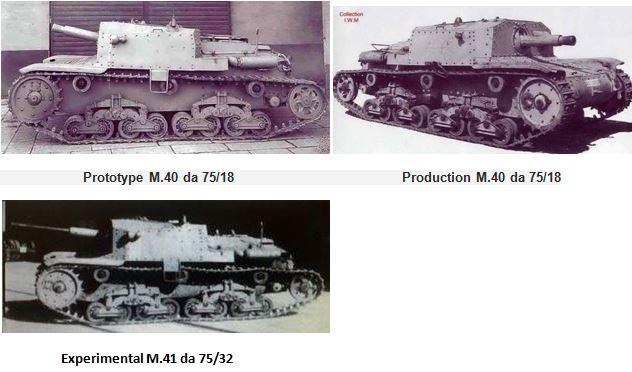 Semovente 105 looks kinda badass though, but with only a mediocre 105mm and 75mm armor, it’s really a tier 5 material. 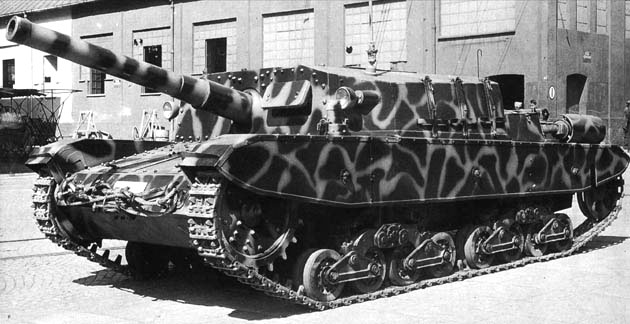 Italian artillery has even more issues (practically nothing original on higher tiers). Heavy tanks – well, the P.26 and P.40 tanks are technically “heavies”, but if we cannibalize them from the medium branch, the meds will have a real problem. This is probably the most advanced Italian heavy project, the P.43 bis from 1943 (100mm frontal armor, 75mm or 90mm gun, 30 tons and 420hp engine – yea, that’s like tier 6-7, depending on balancing). 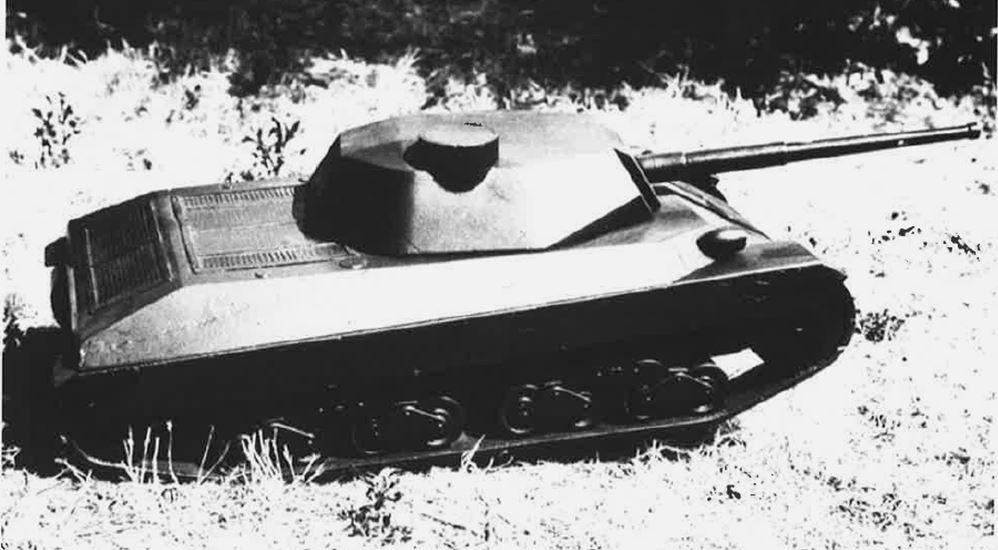 As you can see, Italy is missing hightier SPG’s, TD’s, hightier scouts and heavies. The vehicles that remain seems to have relatively good mobility and firepower, but generally poor armor. The hightier meds of course are modified versions of the western designs, but still – autoloading Leopard? Why not.

Well, here, I guess I don’t have to introduce anything, since I have written on this topic extensively. Czechoslovakia is another major candidate for the EU tree. In case you are interested in details, you can check the “Czechoslovak tree” portal on the old FTR. Some of the stuff in it is obsolete (I looked into it in much more detail ever since, but as an overview, it serves well.

Czechoslovakia is technically in a better position for implementation than Italy. Full medium, artillery and (with a bit of “interpreting” at tier 10) tank destroyer branch can be built, with light tanks up to tier 6 or so. The only thing we are lacking are heavy tanks (we had only the pre-war T-III and Š-III which are utter crap and post-war IS-2 and (experimentally) IS-3). This is (roughly!) how such a tree could look like: 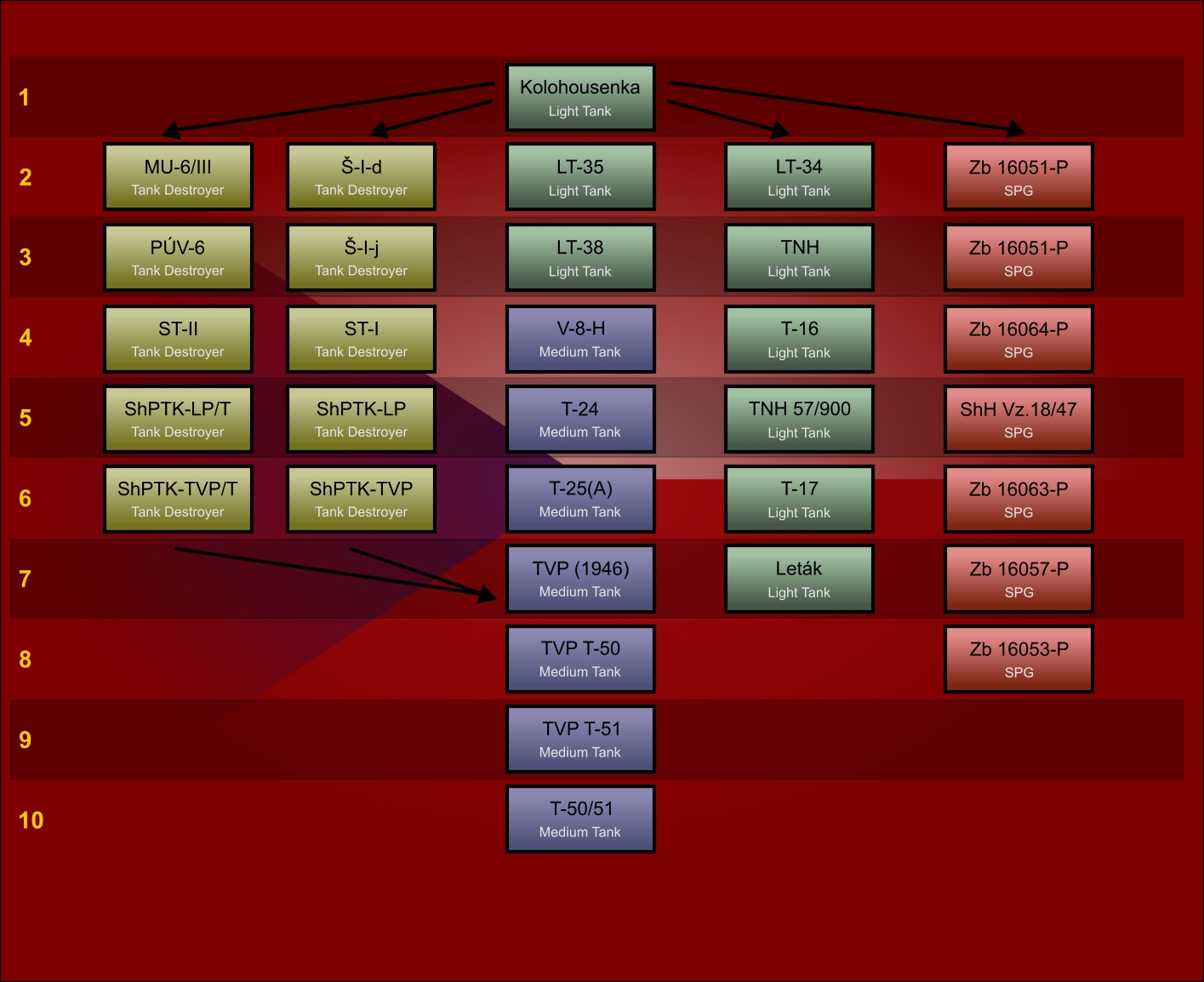 This tree however is obsolete (for example, TD’s are wrong, arties only up to tier 8 – there is enough to make them tier 10, LT7 is an amphibean – that’s not allowed).

Light tanks – well, Czechoslovak LT Vz.38 (LT-38) was the best light tank in the world right before the war and during the early conflicts. The light branch follows that design. T-16 is basically an advanced post-war sloped armor prototype of the T-15: 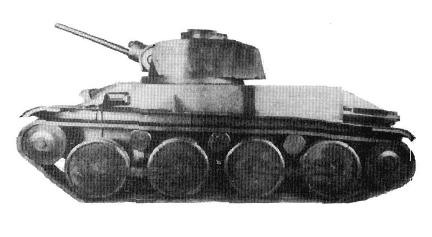 TNH 57/900 is an autoloading 57mm advanced development of the original LT Vz.38:

And the T-17 is one of the last Czechoslovak LT proposals. Both tier 5 and 6 would carry high penetration autoloaders and would be quite nimble, sort of like current AMX 12t. 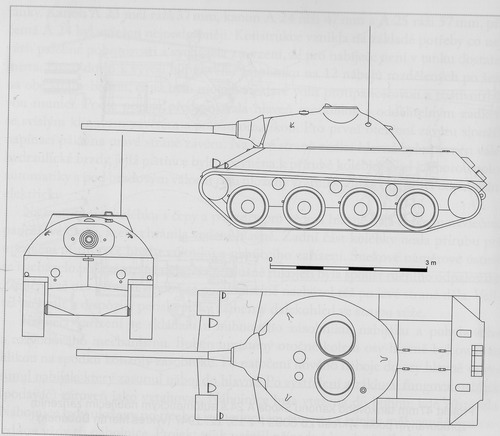 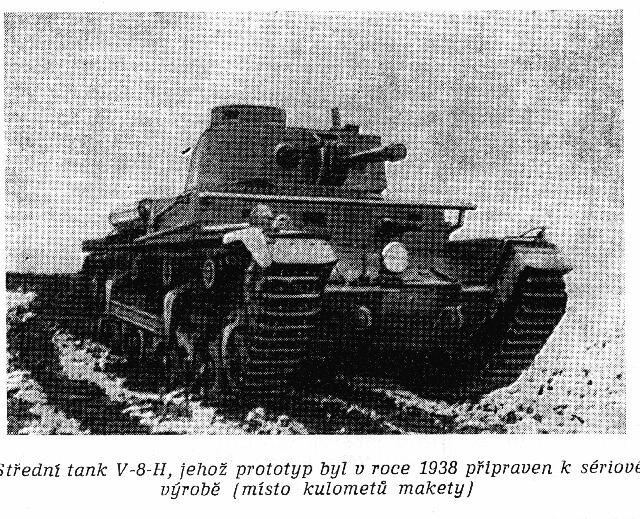 Then we go on over T-24 (“lighter T-25″) and T-25 tanks on tiers 5 and 6 (T-25 is already in the game, but the Czechoslovak one had for one a different armor configuration (a little more in the front, less on the sides), the 75mm gun had more penetration in the game and it also had an autoloader. I wrote about it in detail here.

And now we cross into the TVP realm, various incarnations of which would occupy tiers 7 to 10. TVP has in general following characteristics:

- mediocre frontal armor, good turret armor though
- 100mm gun (possibly with an autoloader), equal in power to the Soviet 100mm hightier guns
- a 1000hp engine – yea, that’s twice as much as the Soviets have

Basically, a more armored version of a Batchat on tier 10. Here’s how the latest stage of the project (T-50/51) looked like, render made by Giganaut… 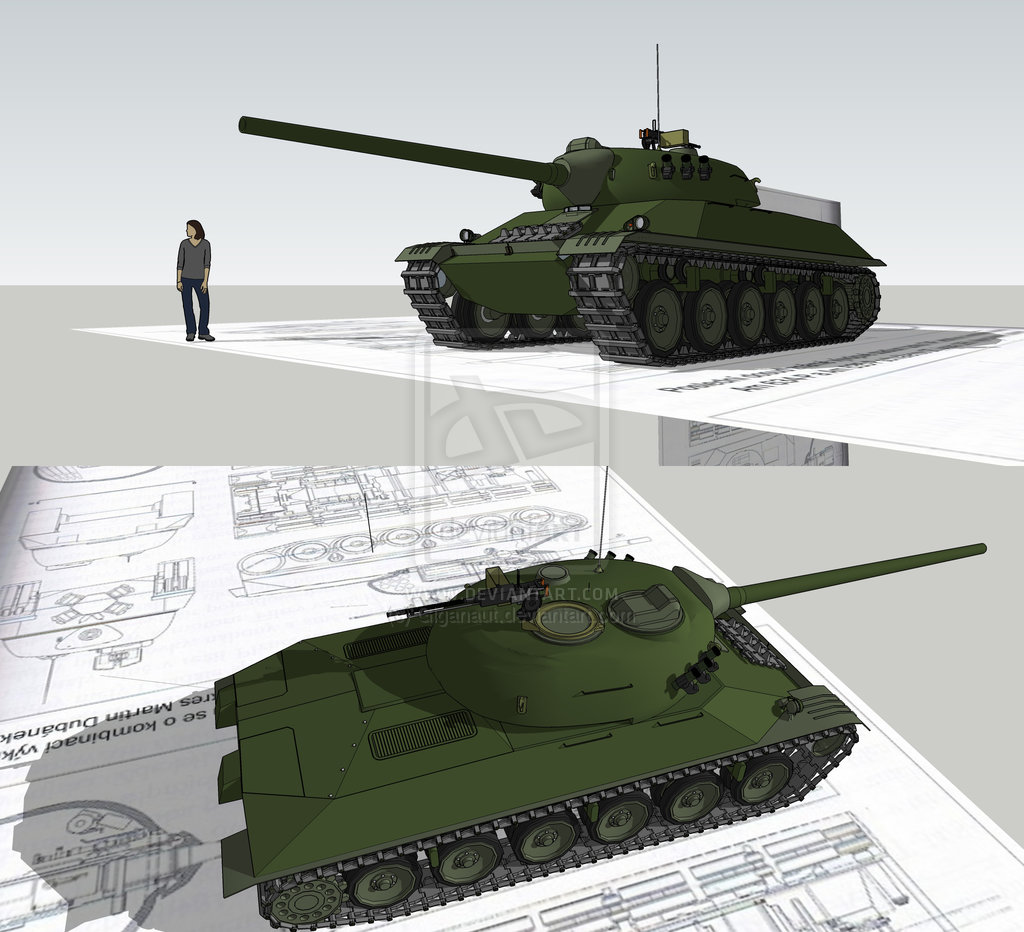 Artillery – the artillery projects were on the heavy side. Mid-tier T-25-based artillery had a turret with a 105mm and 150mm gun (wartime development for Germans), while high tiers are occupied by the Panther chassis, a project to convert them post-war by Czechoslovaks, using Czechoslovak guns. It looked for example like this: 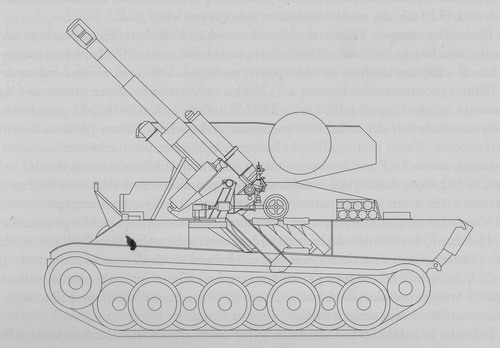 The top tier arty would be the installation of a MASSIVE 305mm mortar B20 on the Panther. Very heavy, very unwieldly, but with tons of hitting power.

And last but not least, tank destroyers. Unlike the artillery, Czechoslovak tank destroyer projects were quite light. There are both turretted and turretless versions. Majority of the hightier TD’s would be built on either the LP chassis (connected to the T-16 light tank) – that’s tiers 6 and 7 – think Hetzer on steroids and a Hellcat with a 17pdr, because that’s what it was. There was a 105mm derp version as well. Light, nimble and powered by very powerful engines (for their weight anyway – 16 tons, 520 horsepower). Armor would of course be non-existent. 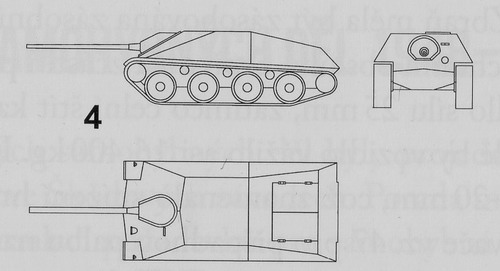 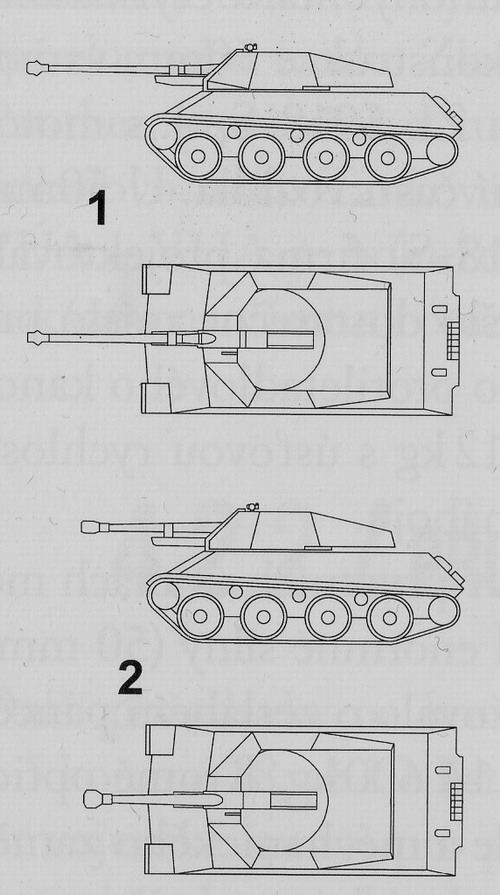 Tier 8 is problematic and I don’t have an answer yet. Tier 9 and 10 would be based on the TVP chassis, it’s still a bit unclear how to do it exactly, but basically, the main option is to have this on tier 9: 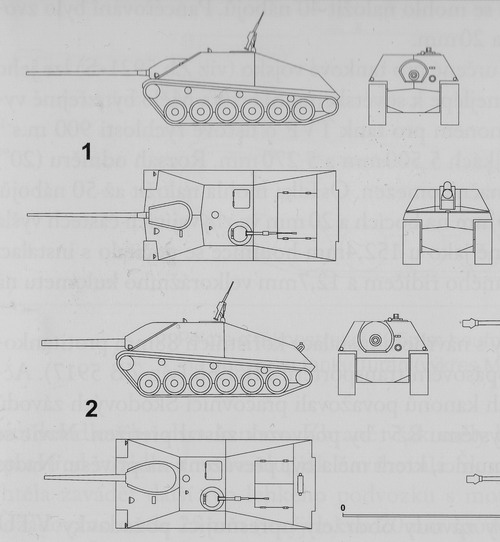 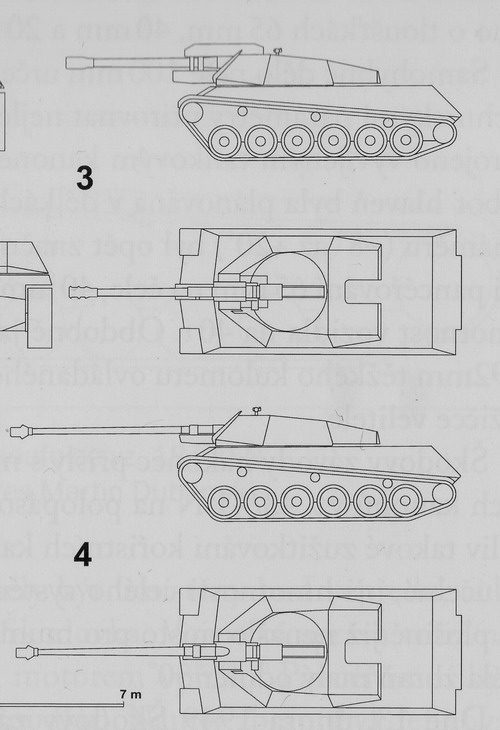 No armor, but 40 tons, 1000 horsepower, a turret and a high-power 152mm gun in it. Insane Hellcat on steroids. And crack. Apparently, in WoT terms, it would actually work… I asked. So yea.

Czechoslovak vehicles are generally light, nimble, with average firepower, but they sometimes have brutal engines. Gameplay-wise, they would be something between the French and the Americans, with a healthy dose of Russian influence.

In order to keep the post withing at least some limits, this is where we end today. Next time, we’ll have a look at Sweden, Hungary and everyone else – some of the Swedish stuff is literally mind-blowing.