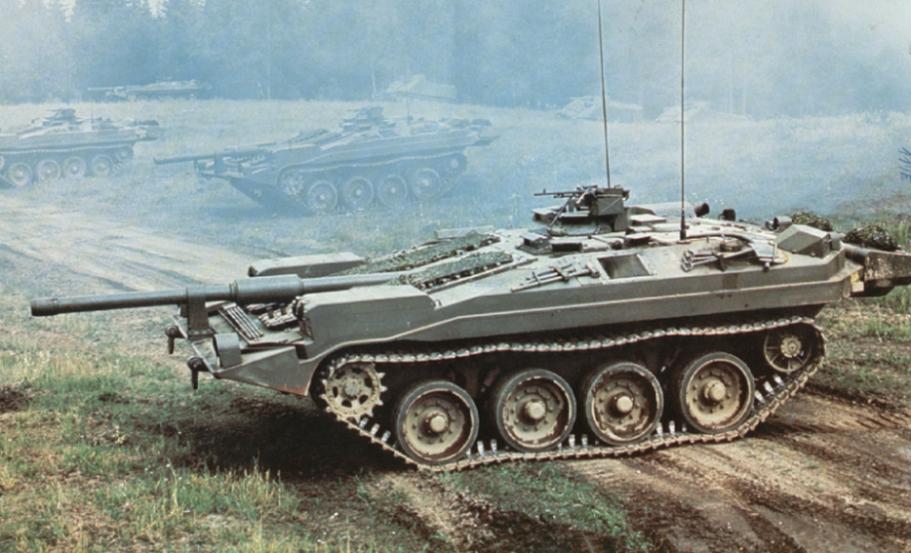 At the point where we finished with the last part of the Swedish series, it was 1961 – five years after the original idea for the Swedish turretless tank was put forward and three years after it entered serious development. Now, it’s time to continue with the rest of the story.

In 1961, the first 2 prototypes for the S-tank project were constructed – these would be called S1 and S2 and were the first proper test vehicles for the S-tank concept. The first prototype (S1) was little more than a test-bed for the hydraulic suspension and commander’s cupola, it was powered by an electric generator and was used to test aiming of the hull and the observation from the commander’s cupola. The second (S2) prototype was however much more impressive, it had complete superstructure, based on the 1961 mock up and it also for the first time had the major components such as suspension, autoloader, drivetrain and engine together.

The S2 prototype was finished sometime in late 1962 and continued the tests started with the S1. In addition, these tests the vehicle was used for included the drivetrain and the autoloader. While the autoloader generally proved to be a good and solid design, the drivetrain and in particular the engine turned out to be a major problem. The use of a combined diesel engine and gas turbine was decided since 1959 and Volvo was tasked with their development and implementation into the tank, but as the first test results came in, it became clear that some serious improvements were needed – in fact, it was found that the tank could go through several engine packs in under a week. These problems wouldn’t be truly resolved until the later versions of the pre-production models.

S2 prototype in 1962 with equipment for swimming 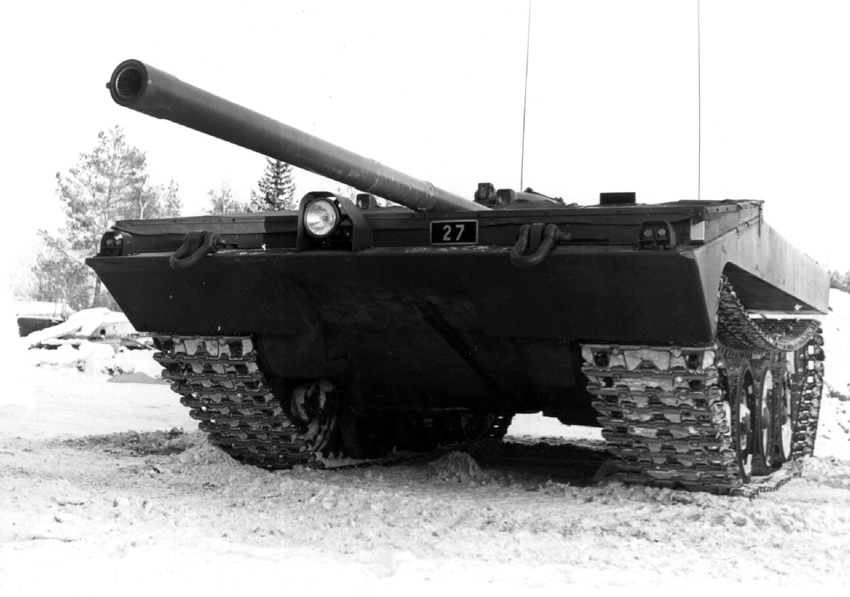 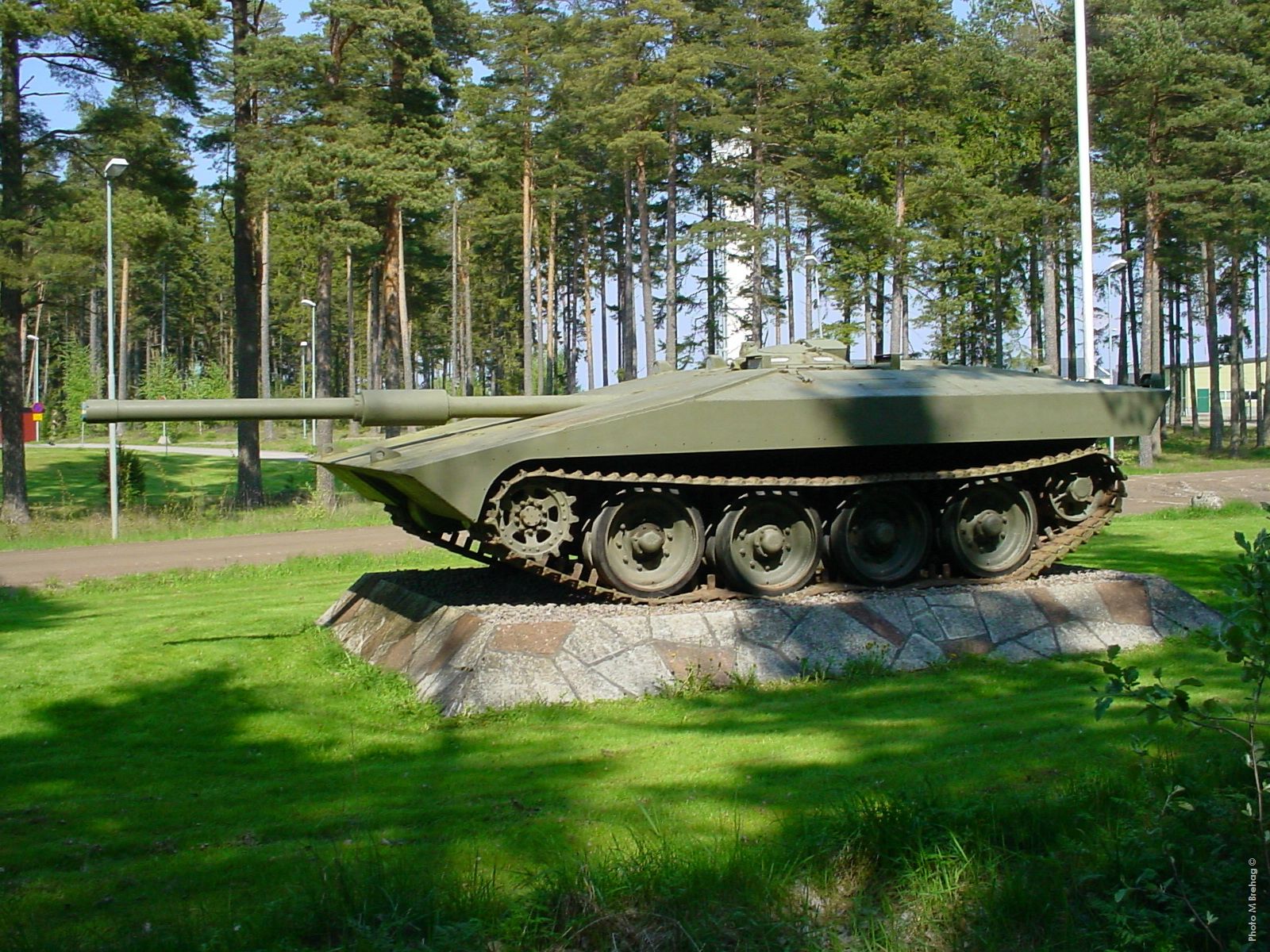 Also in 1962, the tank was for the first time shown to the world in the form of the S2 prototype. It drew major attention with its low turretless design and everyone from France to the US lined up to get a better look at the tank and test it. The interest went as far as the US president John F. Kennedy asking about it and receiving a report on the US Army’s thoughts on the vehicle. The US report on the S-tank was for the most part accurate, the tank had been designed from the ground up for a type of defensive ambush warfare, that was more typical for tank destroyers and therefore it was considered as a tank destroyer in the USA.

In 1963, a batch of pre-production vehicles was built. It was called the 0-series and would more closely resemble the planned production version. These were used for series of tests of everything – from different engine options to trials with built-in dozer blades and different types of armament. Pherhaps most important was that they were used for tests, involving collaboration with infantry and other units. As a part of these tests, the armament was changed from the British L7 gun to a longer version of it, which offered higher muzzle velocity and penetration. In addition, the commander’s cupola was developed into one of the best designs in the world, which has proven itself since by outperforming everything from the Leopard 1 and Centurion to the Chieftain and in one case, even the Leopard 2 in various tests around the world.

Preproduction vehicles being refilled with hydraulic oil after testing 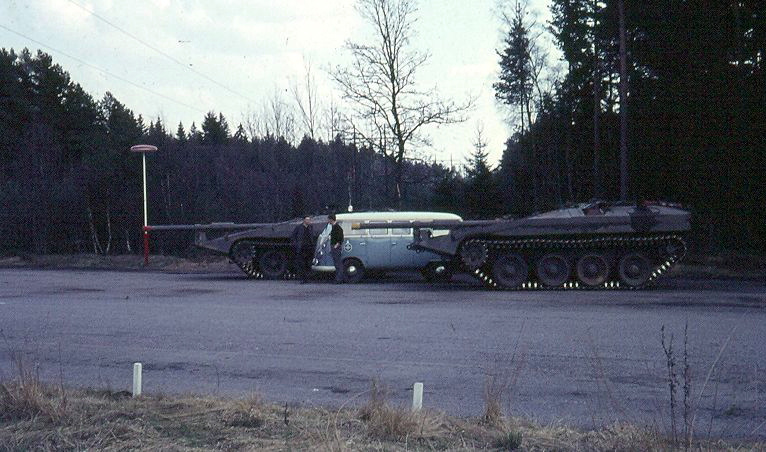 The only major difference between the pre-production models and the final production version was the older design of commander’s cupola and the lack of ribbed armor. As a part of the testing of the 0-series, there was a research into how to improve the frontal armor. Originally the armor was 40mm thick, but tests were being made with 50mm plates as well as a new type of “ribbed” armor.

It was found that this “ribbed” armor, consisting of 40mm tall and 30mm wide metal bars welded onto a 40mm plate, was much less prone to deforming and as a bonus, these ribs added a sort of spaced armor effect, where a round was much less likely to penetrate the main armor plate. On the production version, these plates were used for the front of the vehicle to cover the engine compartment.

The armor of the S-tank 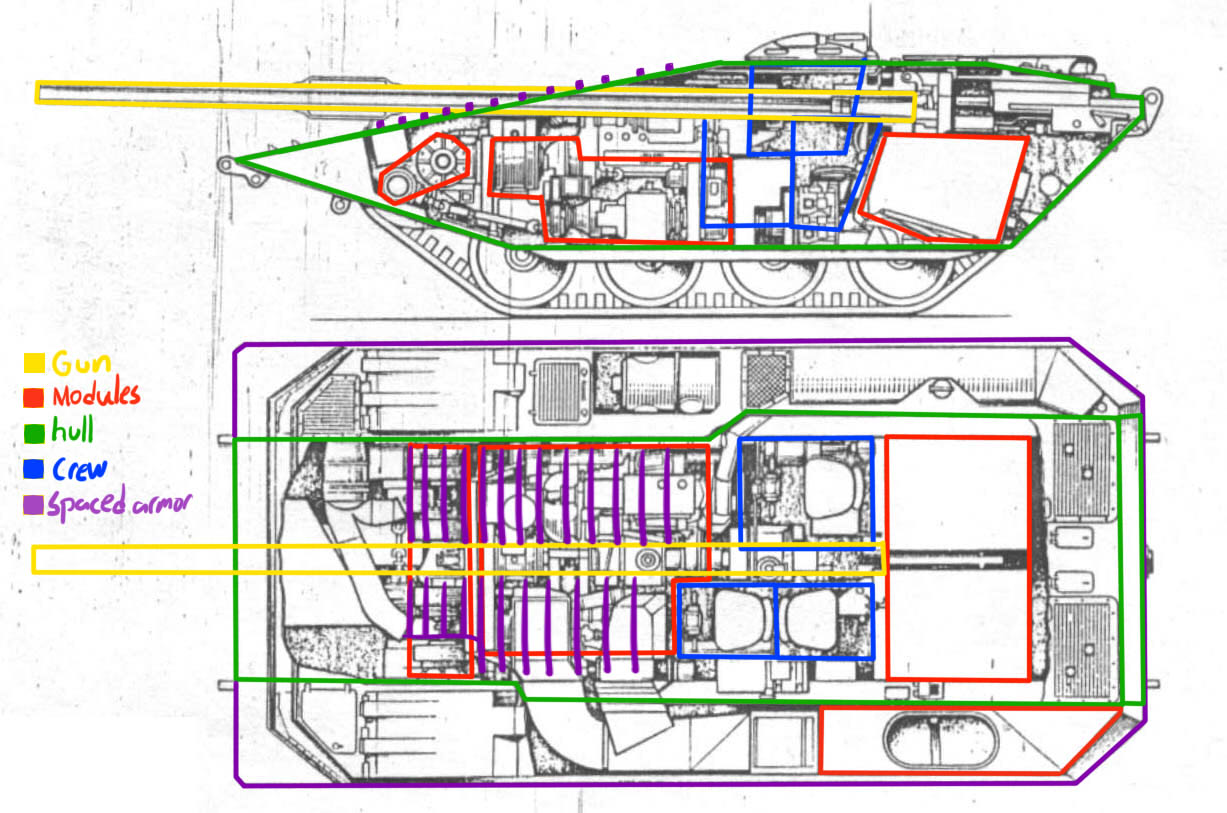 Unlike a lot of other vehicles, the S-tank has a very complicated armor layout, which was possible thanks to its turretless design. The hull front of the vehicle is sloped at such an angle that it will automatically ricochet incoming rounds of 10,5cm caliber. It is however only 40mm thick with the exception of the parts covered by the ribbed armor. This means that (in WoT at least) a 120mm shell will overmatch the frontal armor and penetrate it. I’m not certain if the 30-40mm thick spaced ribbed armor would help against this, so I wouldn’t expect the armor to be the tank’s strength in Wot. In real life however, it would have faced soviet 10-11,5cm guns and for that role, it was sufficient for long. The side armor of the tank is divided into two sections – the inner 30mm thick vertical plate on the inside of the tracks makes up the main part of the side armor, but it is covered by another 30mm thick plate above the tracks. This means that most of the side of the tank acts as spaced armor and has no vital modules in it, except for the fuel tank. The rest is mainly air intakes and exhaust for the engine and space for the machineguns. The rear of the tank is 30mm thick as well, with 18mm of armor for the upper sloped armor and hull roof. In addition to the basic armor, a 30mm thick dozer blade could be mounted on the lower plate to increase the protection and add engineering capabilities. On the Strv 103 model B, storage boxes were added to the rear of the tank. In addition to all this, there was an option to mount standoff armor of the “fence” type, that would prematurely detonate HEAT rounds.

The “fence” armor being applied to the front of the tank. This armor was actually a secret up to 1992. 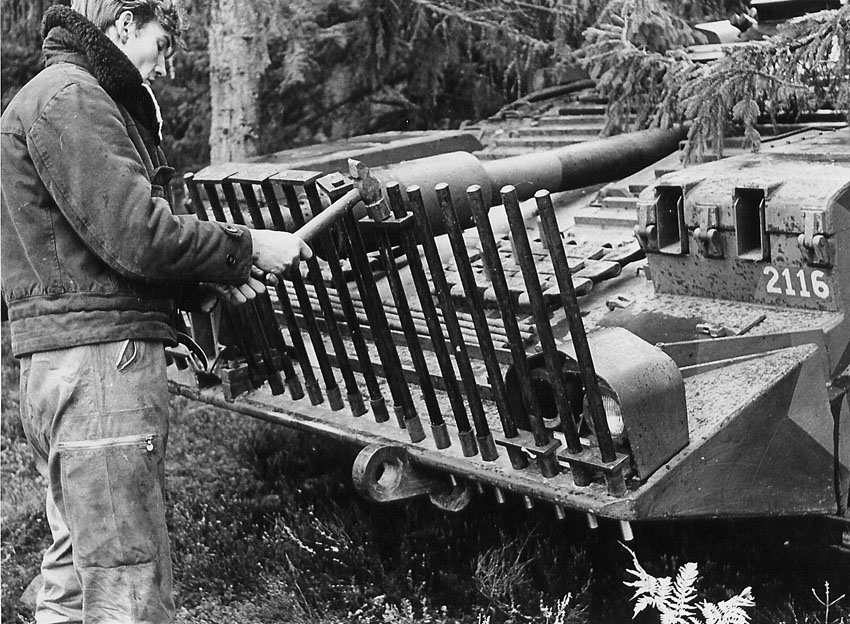 In late 1964, after it became clear that the tank had achieved the most important requirements placed on it, the decision was taken to place an order for the production version. The first production batch included 70 vehicles with the first entering service in 1967 under the designation Strv 103a. In 1970, another batch of 220 vehicles followed, this time with modifications made as a result of the testing with the 0-series. The most important change was in the gas turbine: the 0-series and Strv 103a had both been equipped with the Boeing 502 (300hp) gas turbine, which had been found underpowered. In the Strv 103b, Boeing 502 was replaced with the Caterpillar 553 (490hp), which, combined with the Rolls-Royce K60 diesel engine, produced 730hp, giving the tank the power to weight ratio of 18hp/t. The Strv 103b also introduced the built-in swimming equipment and the dozer blade to the production model. More importantly for Wot however, a laser sight was introduced, which means that the Strv 103b is outside of the Wot timeline. Because of this, I propose to introduce the Strv 103a with an option to research the upgraded engine instead of the Strv 103b.

After the production of the Strv 103b, the tank stayed in service pretty much unchanged until the mid-1980s, when it was once again upgraded, this time to Strv 103c. The main changes included an engine change, modifications to the gearbox, the addition of new rubber tracks and the introduction of dozer blades on every tank instead of every third tank. In this configuration, the tank served with the Swedish army until 2001, when it was finally retired. 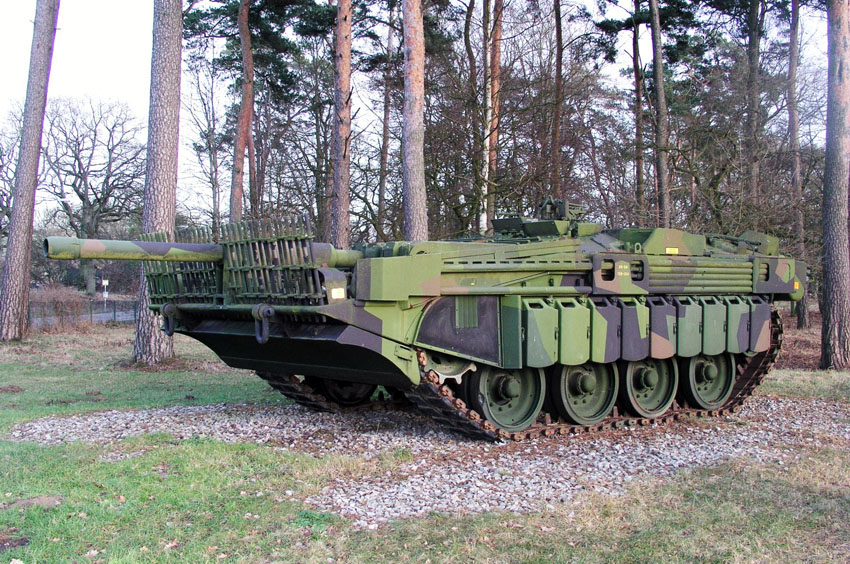 There were however a few interesting experiments with the tank before it was retired. These included a version with additional reactive armour and one tank was even tested as a completely remotely controlled tank. Ultimately, these experiments proved too costly and with the army reduction after the fall of the Soviet Union, the tank was simply decommissioned in favour of a few hundred Leopard 2 tanks.

During the time it served with the Swedish army, the S-tank was generally a well liked vehicle. Crews liked the low profile, good observation capability and good frontal protection. The S-tank did however suffer from a series of problems, such as hydraulic leaks and engine issues when it was introduced and many of these were not fixed until the introduction of the C model. The tank was also problematic when it came to fuel consumption due to the use of a gas turbine and diesel engine combination. However, the vehicle had unique advantages, such as its autoloader, that could fire up to 20 rounds a minute from a 50 round magazine. The tank actually proved to be influential around the world and probably inspired Japanese, American and German designers, who incorporated similar hydraulic suspension into the MBT/KPZ70 and Type 74. Even the Israeli Merkava tank was inspired by the S-tank during its development in late 1960s-70s. In particular, the frontal engine placement was influential, as it provided extra crew protection. Sven Berge, the engineer behind the S-tank, was in contact with Israeli General Tal, who was in charge of Merkava development since 1960s.

In 1993, Sven Berge visited Lantrun armor museum and here, he (on the right) can be seen inspecting the Merkava test-bed with an Israeli officer 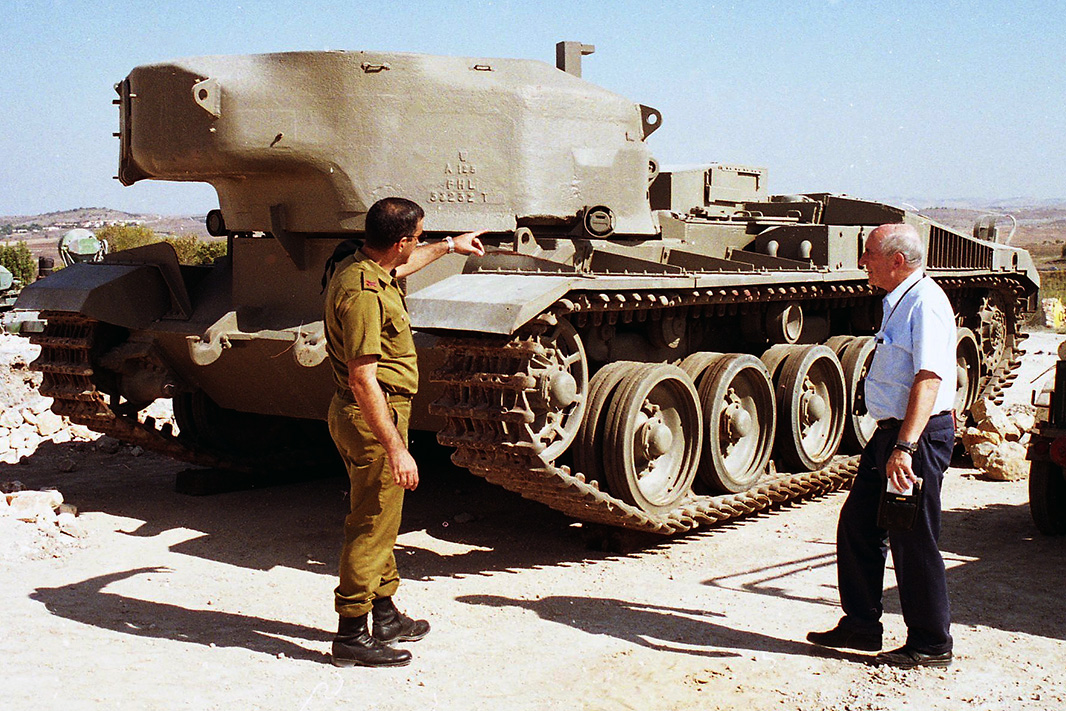 In the end, it’s hard to say whether the S-tank really was a good tank, it had its unique set of advantages but also disadvantages and it certainly wasn’t able to replace the Centurion in Swedish service, as originally planned. The S-tank proved to be an evolution dead end thanks to the unforseen rapid development of fire on the move capability and the development of rounds capable of ignoring the sloping of armor, but in other aspects, such as the autoloader, suspension, observation and the gas turbine engine, it proved to be a very innovative and good design.

The S-tank in Wot

I’m sorry, but this article is already long enough as it is. I will make a separate article dedicated to proposing and explaining how and why the S-tank would work in World of Tanks.